The latest release of Lon Chaney’s most famous silent classic is a Blu-ray, which allows us to marvel at at the actor’s artistry in a beautifully tinted HD image. Erik the Phantom is one of the two or three greatest fantasy makeup performances of all time. The release has three separate encodings, of different versions running at different film speeds. A 1929 recut has the best image, while the original 1925 version is uncut. 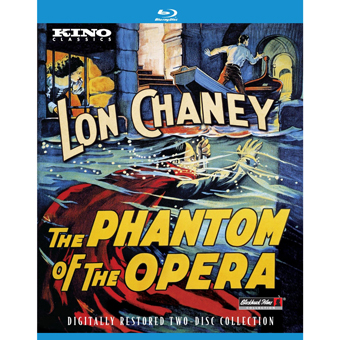 There has never been a shortage of video offerings on this classic title, but a while back none of them were really very good. Several Phantom lasers and DVDs have offered differing versions and levels of quality that made figuring out this puzzle picture a major headache. I’d mainly seen pieces of the show on cable television, with crazy over-tinting and sometimes-blurry pictures that didn’t help much. 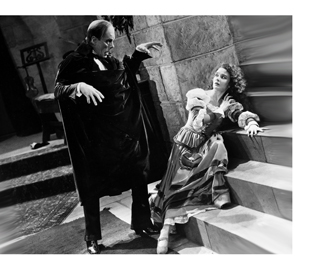 With the jump to HD video, this double disc set of the original Lon Chaney The Phantom of the Opera regains much of its visual grandeur. The dazzling restored Technicolor sequence never looked better. We can examine details in the specially tinted scenes, and fully appreciate the film’s many elaborate sets. Above all, we get an even better look at Lon Chaney’s fairly incredible makeup creation — a man who looks like a living skull. Although not as extensive as one or two earlier disc offerings, the extras give us an understanding of the shaky production circumstances of this classic-by-default.

Gaston Leroux’s creaky old suspense tale comes off pretty well for a silent show in a musical setting. The Paris Opera House is under new management, but an old curse returns in force. Somewhere down in the vast catacombs once used as torture chambers lurks a madman. Erik, known as The Phantom (Lon Chaney) is deliriously in love with the singing understudy Christine Daaé (Mary Philbin), and devises a bizarre method of shaping her destiny. A voice heard through the dressing room wall implores Christine to follow ‘the Spirit of Music’ and realize a fabulous career. Although she appreciates the mysterious music lessons, Christine’s heart belongs to the handsome Vicompte Raoul de Chagny (Norman Kerry). Meanwhile, Erik continues to murder stagehands that discover his secret passageways. Contacting the opera managers, he demands that the reigning opera diva Carlotta (Virginia Pearson) call in sick. If she doesn’t allow Christine to sing in her place, The Phantom threatens horrible consequences.

As a Grand Guignol case of amour fou, Leroux’s The Phantom of the Opera ought to be a gold-plated classic. Yet no film version to date has taken full advantage of its possibilities — and the stage musical may have spoiled the property for the next fifty years. The show creaks with hammy, unlikely characters, but that’s part of its appeal. Those able to enter its giddy Belle Epoque world will find rich melodramatic twists and a fairy tale-like simplicity of theme. A deformed, deranged madman uses both inspiration and extortion to propel a young singer into the limelight — and then seeks to collect her love in return. Much like Beauty and the Beast, there’s a balance between horror and pathos, gratitude and revulsion.

Universal’s lavish ‘Super-Jewel’ production is filmed rather haphazardly by a director acknowledged by most of his peers as a genuine hack. Beyond individually beautiful images, some of which are more amazing in stills than in the movie itself, the movie doesn’t pull us into its fantasy. There are some good designs with light and shadow — ballerinas silhouetted on a wall, a hanging corpse — but these isolated pictorials don’t build the kind of excitement seen in silent horrors by Paul Leni and F.W. Murnau. Even the famed chandelier murder scene is starved for suspense direction. 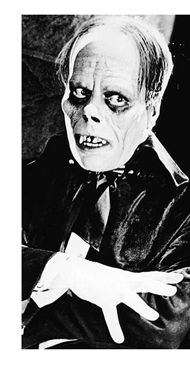 The Phantom sleeps in a bed that looks like a coffin, while Christine is given a bed in the shape of a dream boat. But these details don’t resonate with deeper meaning. The same goes for the secret passageways and the spectral voices from the walls. Even the ‘fire and water’ torture chamber seems as perfunctory as something in a serial adventure. Director Rupert Julien does nothing with actors or atmosphere, shooting events head-on and taking little advantage of Ben Carré’s lavish settings. Some of the action is good, with an exciting final scene when Erik is pursued through the streets. But we watch this show now for the isolated pleasure of appreciating Lon Chaney.

The one element that comes fully to life is Lon Chaney — the star, the phenomenon. Chaney’s Phantom is a magnificent creation, perhaps the greatest makeup achievement of all time. His pantomime informs Erik the Phantom, sometimes against the grain of the perfunctory script and indifferent direction — it’s likely that Chaney himself dictated the angles on his character, as they’re so much more expressive than the rest of the movie.

Erik is only partly explained; I’m still unclear exactly how he came to be. We’re told that he’s both a criminal madman and a practitioner of the Black Arts! As filtered through Chaney’s performance, Erik would for the most part seem to be a lovesick ghoul who laughs at restraining orders. He’s a dark exaggeration of a genius unloved and despised, who takes out his egocentric rage on the world around him.

The classic unmasking scene is a dilly, and still bests the follow-up shock moments in excellent horror like The Mystery of the Wax Museum. It’s a double-whammy, as Erik is revealed first to us, and then a couple of seconds later, to the clueless Christine standing behind him. Chaney understands the searing grandeur of the moment. Erik’s madness seems to leap out of his face and take control of his whole body. 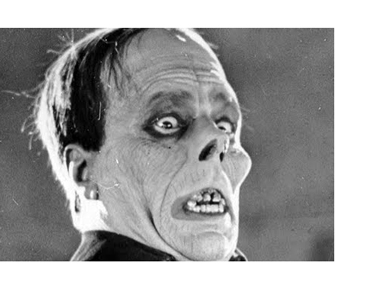 The Kino Classics / Blackhawk Blu-ray of The Phantom of the Opera is the latest in a long line of attempts to re-master a classic movie that saw theatrical release in a series of confusing versions. At first glance this Kino set resembles an Image/Milestone DVD from 2003 but most of the particulars are different. There’s one important improvement worth mentioning. In action scenes on some previous disc releases, film frames were badly distributed on video. This caused the ballerinas, for instance, to look as if they each had four legs when they danced. That problem appears to be long gone.

Should you want to take a look at all the DVD choices that have been offered, I can recommend this informative Silent Era page.

This disc actually covers three versions and four audio choices. Disc one contains two HD encodings of the shorter 1929 version, from mostly very good 35mm elements. The first pass is at 24 frames per second, and is pretty dazzling. The same presentation is repeated at what looks like 20 frames per second, to give a more natural flow to the movement. The tinting and color sequences look very bright, the best I’ve seen them. As the 24fps version pumps more info across with fewer shared frames, it naturally looks better. All the music offered is in stereo. The 24fps version has a choice of a fascinating contemporary track by The Alloy Orchestra, or an archival theater organ score by the great Gaylord Carter. The 20fps option comes with a ‘musical setting’ by Gabriel Thiboudeau. An alternate track for that encoding is a commentary by Jan C. Mirsalis. 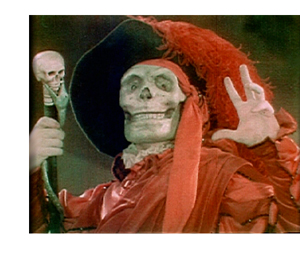 The second disc is a Blu-ray as well. The original longer 1925 cut (114 minutes) apparently only exists in 16mm, and is presented here in a good encoding, considering the rather worn and soft source. Next to the better material, it looks pretty pathetic. But the whole original continuity is here, with much more skulking around those impressive sets and a lot more dialogue, communicated in more inter-titles. At 20 fps, they seem too long; perhaps, as they say, we all do read much faster now. Nevertheless, this version will appeal to Phantom-philes that want to see ‘more’ content like the extra performance scenes of Faust and the two-shot ‘honeymoon’ coda scene. This 1925 version comes with a musical score by Frederick Hodges, also in stereo.

The second disc also includes remnants from yet another official release version of Phantom, in part-sound, from 1930. Universal had lost Chaney years ago, and was legally blocked from dubbing him for the sound version. So they invented a new character, a ‘Phantom’s messenger’ who has a few speeches, one of which survives. It’s curious to hear random lines of dialgoue, while most of the old inter-titles come up anyway. Several of the excerpts have no picture, and for others an attempt is made for a synch-up. Scenes of the opera’s showgirls running in the shadows, giggling, are pretty amusing, as is a human imitating a cat. Composer Gabriel Thiboudeau appears in an interview featurette. Also included are an original screenplay, trailers, and a couple of tangential travelogues from 1925, Paris from a Motor, and A Trip on the Seine.

When I was younger we’d examine the detailed stills from this picture and lament that we’d likely never see the film itself being other than a shaky, spliced-up blur. On Blu-ray the picture is much more steady. We see more detail in everything, especially Chaney’s makeup. His Erik has an interesting new look for every scene.