Some movies attempted to change social attitudes from the very beginning, and director Lois Weber made that goal her specialty, with a great many enormously popular films of the ‘teens and ‘twenties. Milestone’s disc of a Dutch restoration of this 1916 gem is a major find in terms of film culture: it helps write women filmmakers back into the historical record. One of the last discoveries in film school was finding out that all silent films didn’t use exaggerated expressionistic acting. Kevin Brownlow demonstrated that silent Scandinavian films took a naturalistic approach to screen acting, as opposed to the theatrical style seen elsewhere. Much later, thanks to archival compilations like the Treasures from American Film Archives series, I was finally introduced to a couple of the fascinating social issue dramas of director Lois Weber. Although forgotten now, she was as popular as Griffith and De Mille, and more advanced in a less spectacular vein of filmmaking: honest stories about how real people lived. Unlike some of the male directors’ subjects, Lois Weber’s characters seem utterly contemporary as they struggle with the same &#*@$ social problems we face now: poverty and injustice on the personal level.

A full Weber movie that Milestone put on DVD in 2003 is The Blot, a tale of an academic so poorly paid that his family suffers socially. It’s from 1921. As seen on Treasures III: Social Issues in American Film 1900-1934, Lois Weber’s 1916 Where Are My Children? is a progressive/not so progressive protest for birth control but against abortion. Its target is wealthy women having clandestine abortions to avoid being tied down to children. Not only does a heartbroken father speak the title line, Weber illustrates the tragedy with an effective, expressionistic representation of children’s souls lost in limbo, forever waiting to be born. It’s a mixed message but a very effective drama. From the same year, Lois Weber’s Shoes is a less tendentious and conflicted piece about the trap of poverty. In addition to Weber’s insightful, focused direction, it’s graced with a moving performance by Mary MacLaren.

In 2011 a mostly Dutch restoration of Shoes was shown at the AMIA’s The Reel Thing in an early morning presentation. I wrote it up for the old DVD Savant:

August 15 2011: Saturday began with another new restoration, the 1916 American silent film Shoes by Lois Weber, a director of socially-critical dramas noted for their naturalism and low-key acting. Anneke Kross of the EYE Film Institute of the Netherlands produced the restoration, using two tinted nitrate copies and a 1932 cutdown version repurposed as a sarcastic one-reel comedy. The very serious story concerns Eva Meyer (Mary MacLaren), a shopgirl who must turn over her meager pay to her impoverished family. For the want of a pair of decent shoes, Eva loses hope and her disrespect. She gives herself to a man, ‘ruining herself forever.’ The restoration removed thousands of mold spots that marred the images throughout, allowing new viewers to see the film without distracting damage. Michael Mortilla provided a piano musical accompaniment for the screening. 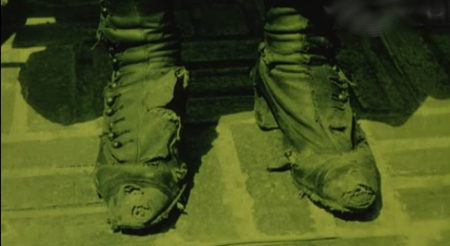 The Milestone Cinematheque has come forward with an excellent Blu-ray presentation of Shoes; the company will soon have an accompanying disc of Lois Weber’s dance film The Dumb Girl of Portici (1916), starring ballet legend Anna Pavlova. As Shoes still has quite a bit of film deterioration, this restoration is the only way to appreciate Weber’s unsung accomplishment.

The movie is a series of static shots, but the angles are artfully chosen to enhance the psychological story being told. Eva earns all the family’s money because her lazy father (Harry Griffith) lounges all day reading pulp fiction he’s picked up when supposedly out job hunting. Eva’s mother (Maggie Witting) keeps promising that Eva will get her shoes, but there’s never enough money: Eva continually cuts out new cardboard insoles, but the rains dissolve them immediately. She’s on her bare feet all day long, and deeply demoralized. The telltale ragged remnants of her shoes say that she’s poorer than dirt.

Weber’s inserts serve as Eva’s POV, showing her admiration for the unattainable new 12-button high-tops in a store window. $3.00 for a pair of shoes in 1916 is of course much more now — one online calculator said $71.80. Real inflation didn’t begin to soar until the 1970s — in 1968 the value of $3.00 in 1916 had only grown to $9.87. The insert shots of Eva trying to hide her ragged shoes are pitiful. When a group of fashionable women pass her in a park (Pershing Square in Downtown L.A., actually) all Eva sees are the ladies’ handsome footwear. Eva Meyer’s nemesis is Charlie (William V. Mong), a good-time guy with an eye for the ladies. Eva’s co-worker in the 5 & 10 cent store is Lil (Jessie Arnold). She likes the dapper Charlie’s attention, but Weber strikes sparks with Eva’s loathing glances in the grinning man’s direction. The film’s ‘big’ scenes take place in a fancy restaurant where Charlie sings in a quartet — and picks up young women. Lil seems eager for Charlie’s possible favors. Eva remains hard to get, but gets a cruel lesson in pragmatic morals when she comes in one morning to see Lil sporting a new watch — apparently the Wages of Sin.

The film is mostly realistic, but one blatant bit of expressionism intrudes. While Eva lies awake at night, a giant clutching hand hovers over her bed, labeled ‘Poverty.’ As crude as a cheap political cartoon, that’s standard cinematic grammar for 1916. We also note Weber’s literal method for explaining that Lil is describing a event from yesterday, that we’ve previously seen: the image dissolves momentarily to a reprise of the event, as if saying, ‘See? Now do you remember?’ Much more sophisticated is the image seen in Milestone’s cover illustration: Eva has to use a small oval mirror to set her hair. On the night she decides that the only way forward is to barter her self-respect, she uses the mirror to change her hairstyle and put on her one attractive blouse. The mirror is cracked, which expresses Eva’s self-image in terms nobody could miss.

In this new restoration, reconstructed from a continuity recently found at Universal, director Weber bookends Shoes with quotes, one from a Zola-esque tract explaining that debasement follows naturally when one is demoralized and hopeless. “She Sold Out for a New Pair of Shoes” sums up a tale of tragedy that could so easily be avoided.

The Milestone Cinematheque’s Blu-ray of Shoes is an excellent encoding of a partly-decayed restoration of this great, moving picture. Only one passage is really clobbered by emulsion erosion. A couple of other scenes have a lot of damage as well, but happily running up the sides of the image and not in the middle. A restoration demo shows how much was cleaned up, and how digital repairs restored clarity and stability to the image. The music track by Donald Sosin and Mimi Rabson is lovely. The atmosphere of the restaurant is enhanced with sounds of clapping and patron hubbub walla, but we remember most the lonely violin associated with Eva.

As always, Milestone has unearthed a bevy of extras for this release. The Dutch restorers provide a video about their facilities. One of the films used as a source for the restoration is a one-reel early talking comedy in a series called ‘Brevities’, which is actually a cut-down of Shoes, with an added sarcastic narration. Unshod Maiden uses wisecracks and heartless ribbing to make fun of the ‘silly’ drama of a film then only sixteen years old. A typical joke sees the snide narrator snapping out, “In Mary’s inmost soul, she felt like a heel.”

Critic Richard Koszarski provides a featurette in which he discusses the Brevities series and Hollywood’s dismissive attitude toward silent film as soon as sound arrived. This is much more malignant than the later TV show ‘Fractured Flickers,’ which at least made a generation of kids aware that silent films existed: it was where I first saw images from The Lost World and The Hunchback of Notre Dame.

Koszarski also contributes an audio track of a 1971 interview he conducted with actress Mary MacLaren. It ranges far afield. In it we frequently hear MacLaren’s cat, whining as if jealous of her attention.

The feature also has an excellent commentary from Shelley Stamp, the author of Lois Weber in Early Hollywood. The Blu-ray lists a 1911 short subject by Lois Weber and her husband Philips Smalley, but it doesn’t appear. Milestone has instead put it online at Vimeo: The Price.