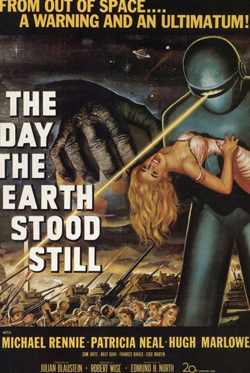 The Day the Earth Stood Still

Elsewhere on TFH, Joe Dante describes Jack Arnold’s 1958 The Space Children as that rare example of a “pacifist” sci-fi thriller. Robert Wise’s 1951 The Day the Earth Stood Still could qualify as the granddaddy of that genre were it not for its ambivalent message which is, loosely translated, “Be peaceful or we’ll blow you out of the solar system”. Regardless,  Klattu, the kinder, gentler alien who visits earth carrying a stern warning from space, embodies the humanism at the center of Edmund North’s screenplay. An intelligent and, at times, lightly satirical look at 50s paranoia mixed with high-caliber sci-fi thrills (personified by Klattu’s interstellar bodyguard, the ominous robot Gort), Wise’s film continues to make a lasting impression on all who see it. Michael Rennie plays Klattu and the thrilling theremin-powered score is by Bernard Herrmann.