Criterion lavishes a major upgrade to its older box set celebrating the first major rock concert event, the ‘California Dreamin’ idyll that some say marked the beginning of the Summer of Love. Get ready to hear and see some history-making performances from Big Brother and the Holding Company, The Jimi Hendrix Experience, and The Who. Plus two more features and a bundle of ‘extra’ music sets . . . including Tiny Tim. 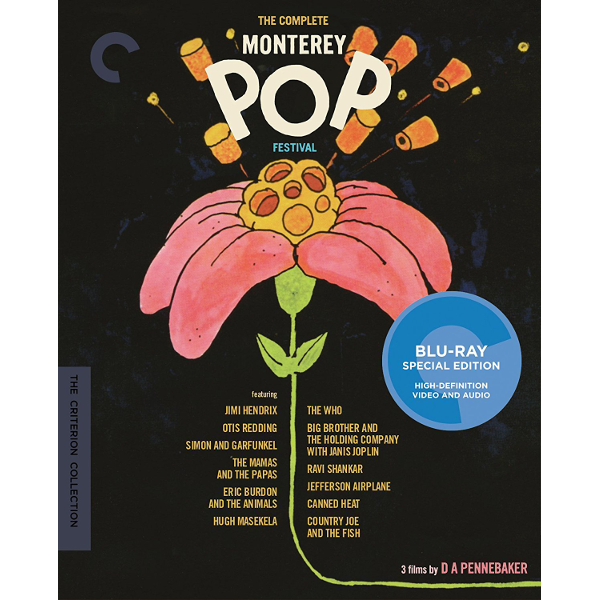 Criterion surprised us a few months back with a marvelous disc of Festival: Folk Music at Newport 1963-1966, a wonderful vintage concert film. Now they’ve doubled back to their previous The Complete Monterey Pop Festival. Their original DVD hails from 2002, and an earlier Blu-ray arrived in 2009. Given a complete remaster, it’s surfaced again looking and sounding better than ever. 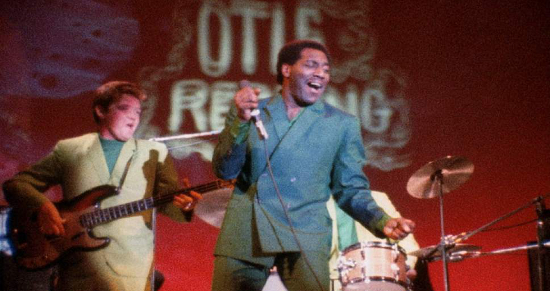 I got my first look at Monterey Pop my very first week at college, projected in 16mm in our UCLA dorm, Sproul Hall. The picture looked pale and grainy. The weak and unsteady soundtrack was also disappointing for dormies that had brought massive stereo systems with them to school. We were spoiled, having just seen Woodstock in theaters in 70mm (well, in 16mm blown up to 70) and multi-channel sound. We loved the music groups in the earlier picture, and that was about it.

Digital image and audio restoration have worked miracles once again, and technical types are quick to add that the technology has improved considerably in just the eight years since the last release. The big question is ‘do I need to buy it again?’ If you’re watching on a normal monitor setup the answer is probably no. But there are plenty of home theater fans with top-end equipment that will appreciate the new mixes. Aside from the music angle, Monterey Pop is yet another cinematic first for the docu filmmaker D.A. Pennebaker, who in the 1960s magically happened to be in the right place just as history was made. Besides his many personal productions, he was a prime docu cameraman on a number of milestone quasi- cinéma vérité classics including 1960’s Primary. For the first time a team of film documentarians tried to cover an entire music festival, a daunting task considering the limits of the sync-sound 16mm equipment then available. Pennebaker and his co-cameraman described their equipment as ‘homemade.’

The three nights of the Monterey International Pop Festival marked a shift in pop away from solo performers and folk oriented music to album-based rock groups. The film is put together in Pennebaker’s personal vérité style — no narration, no tricks, just what his cameras are able to capture. The rock groups come across as what they were, instead of the hyped images generated by media manipulators. As soon as the record companies saw the profit potential in rock documentaries, the lawyers moved in. D. A. Pennebaker’s camera team records performances at the 1967 Monterey International Pop Festival, along with audience reactions and a few glimpses of behind-the-scenes activity. A wide variety of acts appear — pop artists and rock groups, English talent and jazz groups, and Otis Redding’s soul act. This is the weekend when Janis Joplin blasted onto the scene with “Ball and Chain”, where The Who destroyed their instruments and Hendrix burned and his guitar on the stage — all legendary rock-theater events captured on film. Criterion’s 3-disc package again includes two more features that make use of thousands of feet of footage excluded from the final cut of the feature. Jimi Plays Monterey (49 minutes) and Shake! Otis at Monterey (19 min.) were both edited and finished in 1986. Adding to that, 1997’s The Outtake Performances assembles just over two hours’ worth of vintage acts not before seen.

Largely free of the greed that soon strangled the music business, the partly improvised Monterey Pop simply tries to record the length and breadth of three days of music. The art to shooting rock concerts, perfected ten years later in Martin Scorsese’s The Last Waltz, had yet to be invented. Pennebaker and his cohorts manned cameras that maintained a crude synch between each other and the master audio recorder. They were unable to communicate much with each other and used a signal light to indicate which songs they were supposed to be filming. No attempt was made to film everything, and some of what came to be known as monumental performances were only captured by sheer luck. In his interviews Pennebaker describes some of his cameramen-assistants as musicians first and cameramen second. They invariably record the right thing, but not always in focus or with a usable exposure. A couple of good performances in the Outtakes reveal the cameraman’s ultimate nightmare: footage with big globs of hair stuck in the camera gate.

The audio on the original film release had major issues, some of which could not be eradicated. Some were part of the stage audio system and some were flaws in the recordings. A mix or two are way off, with some instruments barely heard and lyrics too low even though we can see the performer singing. These occasional disasters only add to the feeling that the concert was a one-time-only happening, that what was captured is all that much more precious. Several priceless moments, like most of Jimi Hendrix’s crazy act, were captured from only one angle.

Savant listened to all of this era’s music on the radio and attended a few concerts as a teenager, but I’m no expert on the subject of Rock in the sixties. That’s the real value of this disc release — between the audio testimony of producer Lou Adler and director Pennebaker, and the authoritative essays in the 74-page insert booklet, I now know something of what it was all about. The peace & happiness of Monterey Pop now stands in stark contrast to Albert Maysles’ grim Gimme Shelter, just two years later. Michael Wadleigh’s Woodstock remains the touchstone for the era, but some of it now plays like a commercial for a Hippie Empire that never really existed. Although devoutly to be wish’d, Peace, Love & Music did not lead to a social revolution.

Yet some kind of sea change is apparent in the audience at Monterey Pop. The faces of the pretty girls of 1967 bring back illusory memories of a time when everybody seemed to be young and beautiful. Pennebaker begins the show with an open-faced girl saying how Far Out the festival is going to be. Because the musicians are often audience members themselves, present to enjoy what else is being offered, familiar faces keep popping up in the seats. Identified clearly are Juliette Greco and Mickey Dolenz of the Monkees, and Helena Kallianiotes of Stay Hungry. One guy reminds me of a young Sam Waterston, but I’m probably crazy.

The extra performances on the outtakes discs actually look fine, for the most part. Even though Pennebaker describes some of the acts as washouts for the camera, the only major name band missing seems to be The Grateful Dead. (Wrong: the Grateful Dead is present in the outtakes performing a nine-minute song, “Viola Lee Blues.” Thanks to correspondent David Barry for the correction.) Among the acts seen only on the outtakes reel are The Association, Al Kooper, Laura Nyro, The Byrds and Quicksilver Messenger Service. Tiny Tim appears in an extra snippet taken in the below-stage commissary; we wonder if he badgered the cameramen until they filmed him. In addition to the new tunes, two songs only heard but not seen at the beginning of the feature are performed on camera: Combination of the Two by Big Brother and the Holding Company and Scott McKenzie’s San Francisco. The Criterion Collection’s Three-disc Blu-ray Collector’s Set of The Complete Monterey Pop Festival is an improved remaster, with a “new 16-bit 4K digital restoration of Monterey Pop supervised by director D. A. Pennebaker, with and uncompressed stereo soundtrack. Alternate soundtracks for all three films feature 5.1 surround mixes by recording engineer Eddie Kramer, presented in DTS-HD Master Audio.” Criterion’s usual high standards for image cleanup apply, and given the limitations described above, the Blu-ray image and sound are remarkable. I’d say that every trace of color and sharpness has been extracted from the 16mm negative.

Nowadays, nobody does anything in the public sector without an eye on marketing, media development and franchise opportunities. The interviews and essays show us that the festival was initiated as much a party opportunity as a moneymaking venture — producer John Philips of The Mamas & The Papas possibly didn’t realize what a big idea he’d kicked off, the notion of super-concert festivals. The idea of filming it wasn’t yet part of a larger commercial marketing scheme. Woodstock became an entertainment lawyer feeding frenzy, and Altamont was an under-produced attempt by one group and their producer to reap a fortune. The cruelest cut of all was George Harrison’s naive attempt to pull off an almost impromptu Concert for Bangladesh dedicated purely to charity: the record company attorneys with their contracts waited in ambush to swoop in and take all the money. The greater appeal of Monterey Pop is its relative innocence, commercially speaking — compared to what followed, it’s sweetness and light, and mainly about the joy of the music.

Another new extra item from disc producer Kim Hendrickson is Monterey Pop’s original companion film Chiefs, an 18-minute documentary by Richard Leacock. It simply covers a convention of police chiefs held in Honolulu, without a hint of satiric irony. The top cops discuss their problems, which include The Black Panthers and those provocateur agitators back at the Chicago Democratic Convention. It’s the Silent Majority’s position clearly expressed by the men charged with maintaining Law and Order. I’ll bet that filmgoers for the concert picture heckled the screen throughout. It certainly expresses the cultural divide — Criterion’s notes say that the chiefs praised the way Leacock presented them.

The Complete Monterey Pop Festival is still a killer show, what with all of those history-making rock performances. Keith Moon breaks and tosses scores of drumsticks, Janis Joplin receives a tumultuous reception from the crowd, and Jimi Hendrix conjures weird showoff feedback as if he were performing magic brought back from another planet. Ravi Shankar’s slowly building number sculpts the crowd (the cutaways we see are true sync-sound) for a finale that captures a transcendent moment in time, forever.