We thought all the great vintage music documentaries were accounted for, but Murray Lerner’s look at the Newport Folk Festival in the mid-‘sixties is a terrific time machine to a kindler, gentler musical era. The mix of talent is broad and deep, and we get to see excellent vintage coverage of some real legends, before the hype & marketing plague arrived. 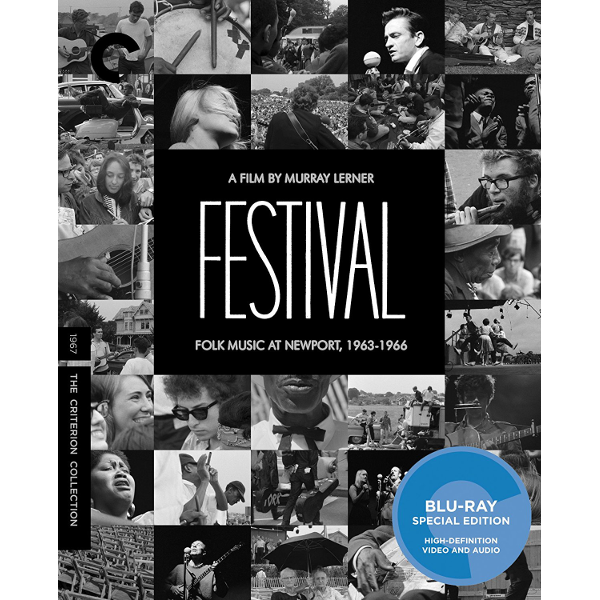 Murray Lerner won a 1980 documentary Oscar for his marvelous film From Mao to Mozart: Isaac Stern in China. Although he took on non-musical subjects at various points, he’s made a side career just from the film he shot of rock bands at the famous 1970 Isle of Wight music festival, irreplaceable archive footage of name acts like Jethro Tull, Leonard Cohen, Jimi Hendrix and The Who. His commercially available The Moody Blues 1970 Live at the Isle of Wight Festival is the only record I’ve found that reflects the way that favorite band sounded, ‘back in the day.’

Now Criterion hits us with something I didn’t know existed, a film about the Newport Folk Music Festival, which started as an outgrowth of the Newport Jazz Festival back around 1960 or so. With its 1967 release date, the docu picture Festival: Folk Music at Newport, 1963-1966 predates the ‘grandaddy’ rock music documentaries Monterey Pop and Woodstock. The difference is that Festival is not a full record of any concert, or really of any individual artist. It’s a selective 98-minute feature that contains a few complete songs but mostly excerpts from over twenty performers, intermixed with footage of the attendees and interview audio from selected spokespeople, from big stars to ordinary ticket holders. The film is collected from three years of festivals.

The years 1963 through 1966 are by no means the nascent years of the movement, as folk music had already been turned inside-out with blacklisting crackdowns on performers aligned with pro-Union or anti-racist activity, and those that were considered politically undesirable. But if there was ever a grassroots music movement, this was it. Ordinary young music fans are recorded being uncommonly insightful about what folk music means — the ability for anybody with talent to express themselves. In addition to the soulful new group of poetic singer-songwriters, the performing net here includes old-time gospel and community-type singers, interesting blues guitarists, ordinary choirs, a drum group and even a dance group or two. 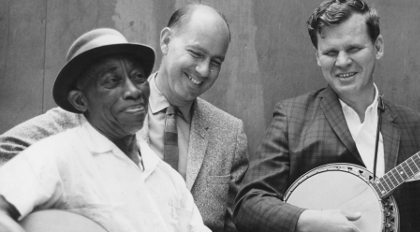 The performers on view (look at the ‘starring’ list above) comprise a pretty amazing selection, and Lerner’s cameramen capture plenty of drop-dead historical moments. Joan Baez talks casually in a car, cuts up like a teenager (which she may have been) on the edge of the stage, and has fun improvising with other performers, hitting those pure high notes with ease. At one point during a performance Bob Dylan asks for a harmonica; he already has a holder around his neck and we’re not sure what’s happened — did he lose his own? We can’t tell what year individual songs are from but at one point he breaks out with an electric guitar, changing the chemistry of his music altogether. I’m not a schooled historian of these things, but that may be the moment when he left the fold, to muddy the water with Folk Rock.

We simply aren’t accustomed to seeing some of these people, this young. Dylan looks as if he hasn’t been shaving all that long, and Johnny Cash is in terrific shape. Talking about Paul Butterfield, Mike Bloomfield is an enthusiastic motormouth. We see perhaps a minute each of Theodore Bikel, Judy Collins and Donovan, but hear several songs from Peter, Paul and Mary. They play games on stage too, and seem genuinely natural and relaxed. It’s fairly amazing to see Buffy Sainte-Marie this early in the game, with her distinctive voice. 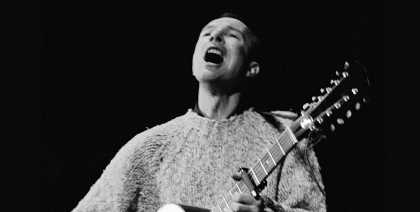 Representing the old guard are the essential Pete Seeger and Ronnie Gilbert of the then long-gone The Weavers. The strength of the documentary is the window it gives us on the breadth of the performers. We hear a couple of impressive samples from Odetta, a powerful singer. An ancient blues guitarist named Mississippi John Hurt happily sings his (really dirty) song about a candy man; he had only recently picked up a guitar again, after forty years of silence. We hear from respected regional singers, including old ladies one would expect to be on a porch in Kentucky or Tennessee, shucking pea pods. It’s everybody’s music, the people’s music. Some songs are just about happy feelings, while another powerful protest song is a slam against a specific sheriff in a mining town, who uses his office against the miners even though he is himself a mine owner. This is a net thrown wide, a people’s Americana of music. 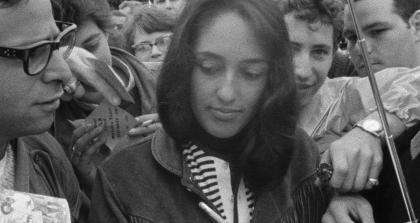 The editing is both masterful and unpredictable. Monterey Pop’s simple ambition was to record the music and capture the ambience of its subject, which Woodstock wanted to do that and make a larger statement about youth culture, accurate or not. Festival seems to be inventing its brand of documentary as it unspools. We start with an unmotivated glimpse of Jim Kweskin’s Jug Band, out of the blue, and Criterion’s liner notes tell us that one of Kweskin’s group would later become a notorious commune/cult leader. About forty minutes in Lerner’s editors treat us to a ten-minute section that plays like a medley of famous faces and distinctive music; it’s marvelous. It really sounds fresh, new, different. Were they ever that young? Were we ever that young?

It’s not about celebrity, at least not yet; one kid tells us that Bob Dylan’s popularity is on the brink of disqualifying him from the Newport orbit. They’ve come to get away from pop music, manufactured trends and marketed novelty of the mainstream. Small and intimate and from the heart, the performers we see (including Dylan) have a direct relationship to their audience that isn’t the same as that between big stars and paying customers. 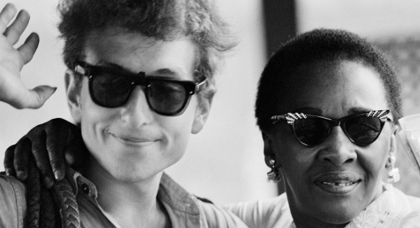 The Criterion Collection’s Blu-ray of Festival: Folk Music at Newport, 1963-1966 is an extremely clean show; some say that the B&W images are in 35mm but Criterion’s liner notes nail down the original format as (very good) 16mm. The excellent monaural audio is remixed from original elements, and compares well with that recorded for Monterey Pop.

Murray Lerner is very much with us and worked with Criterion on the production of the disc. Two new documentaries (see below) gather surviving personnel to discuss the festival and the making of the show, especially its editing. A lengthy selection of outtake performances is present as well.

Amanda Petrusich’s liner notes are highly informative, but we found ourselves repeatedly referencing expert Mary Katherine Aldin’s notes on the performers while watching. I feel as if I’m patching over gaps in my woeful cultural awareness.

I was surprised by the disc’s subtitle track, which covers no dialogue or lyrics, but merely notes who various performers are when they appear. Most of the talent on view will only be familiar to serious music experts, so one would think a lack of IDs on the original release prints would have been a real frustration — like not knowing who the ‘witnesses’ are in Warren Beatty’s Reds. As Criterion discs always have subs, this may come as a surprise to many purchasers.

For this viewer Festival is this marvelous souvenir from a window in time, when commercial interests hadn’t quite clobbered this ‘arts ‘n’ crafts’ corner of the music scene. By the time of Woodstock the corporations had moved in, and the ‘free’ festival became an unrepeatable gold mine for entertainment lawyers. Big profits and competing interests guarantee that nobody can turn on a microphone without some company demanding money. We wonder how Lerner could possibly operate, how he obtained permission to turn the performances into a commercial film without having music companies breathing down his neck. It makes Festival all the more of a welcome surprise.