Take a look at the roots of American campaign image consciousness, and the then-new techniques of cinéma vérité to bring a new ‘reality’ for film documentaries. Four groundbreaking films cover the Kennedy-Humphrey presidential primary, and put us in the Oval Office for a showdown against Alabama governor George Wallace. 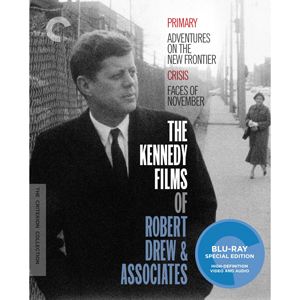 Professor Stephen Mamber gave excellent lectures back at UCLA in his classes on the documentary film, but I have to say that only in the last few years have I been able to see the core films associated with the concept of cinéma vérité. Criterion released Jean Rouch and Edgar Morin’s Chronicle of a Summer, Chris Marker and Pierre Lhomme’s Le Joli mai and through Eclipse a group of Allan King’s ‘Actuality Dramas’. Now Criterion is back with The Kennedy Films of Robert Drew & Associates, an essential group of films from some genuine vérité pioneers. The men that collaborated on this series of TV shows would indeed become the seminal group for the new kind of documentary filmmaking: Richard Leacock, Albert Maysles, D.A. Pennebaker and Gregory Shuker.

Working at Time-Life, Robert Drew got the notion of a documentary that wouldn’t be the usual boring narrated lecture. Even the acclaimed TV shows of Edward R. Murrow followed the standard format. To really cover events on the fly, Drew needed synchronous video and audio recording on lightweight 16mm cameras. He got a leg up on the future of filmmaking by persuading Time-Life to invest big money — half a million dollars — in the development of the new technology.

What this means is that Drew and his associates could film moving events as they happened, recording sync sound as they went – something totally new in filmmaking. The key shot displaying the new freedom shows John F. Kennedy walking through a crowd, with eager Minnesotans cheering him on. When he passes, the camera follows close behind him as he enters a large hall. The wide-angle lens puts us almost in JFK’s position, with the back of his head close to the lens and the corridor sweeping by on both sides. When he’s finally at the podium the camera pans left and reveals the huge audience that has been waiting for him. We’re told that nothing like this had been seen before. It takes a real rough riding cameraman to pull this off, as he must mind the framing, the focus and the exposure all at the same time. Sure the film is a little grainy, but the ‘you are there’ sensation of reality is unsurpassed. 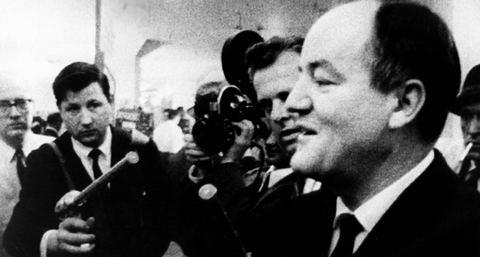 Robert Drew’s cameras were able to tag along with both the Kennedy and Hubert Humphrey campaigns for 1960’s Primary, a true vérité milestone. Since both candidates are almost always ‘on,’ the camera doesn’t make them to do anything they wouldn’t otherwise do. A bustling primary campaign is a perfect subject.

The candidates meet the citizens, shake hands and drum up the votes. Humphrey wins over a group of farmers and Kennedy fills a hall with women (in an unending variety of silly hats) eager to see the showboat candidate and his glamorous entourage, including Jackie and Bobby — who the emcee announces as JFK’s father.

The camerawork is sensational. Kennedy looks great whether shivering on a pre-dawn sidewalk or speaking in a choker telephoto close-up. If the cameraman stumbles, it’s been cut out. Parallel coverage from one, maybe two additional cameras provide terrific cutaways to delighted children and smiling women. The coverage reminds us of the concert scenes in A Hard Day’s Night: the unspoiled Minnesota kids look adorable. Kennedy comes off as slick but charismatic; Humphrey seems honest, sincere and extremely friendly.

Watching Primary in 2016 practically makes one want to cry. Kennedy tends toward pie-in-the-sky generalities and Humphrey gets bogged down in the farm talk, but both candidates emphasize issues and substance. Each speaks of the other in respectful terms. Perhaps politics was just as suspect in 1960 as it is now, but anybody can see that the caliber of candidate was much better.

Drew uses a minimum of narration and the only music we hear is from the environment. Humphrey’s campaign song is a steal of the Disney Davy Crockett theme… did rights holders back then worry about their music being hijacked for political purposes? Kennedy’s setup for a local TV interview sees him sitting behind an ordinary card table in front of a hanging piece of paper, like something for Junior High School. That’s the state of television image awareness in 1960.

Primary was shown on TV cut-down almost by half; Criterion’s presentation includes that cut and the original, full 52-minute version.

1961’s Adventures on the New Frontier allowed Robert Drew’s cameras into the Oval Office in the White House as an experiment, to see if Kennedy would give the Drew team permission to cover a real crisis situation in the future. The resulting TV show is more conventional than Primary. It’s packed with narration, and some of it is fairly superficial, even JFK’s family coming to the White House to get autographs. The commercial breaks repeatedly cut to an exterior shot of the White House, as the same squirrel runs across the same patch of lawn. One of the segments reprises scenes from Primary and another shows aide John Kenneth Galbraith and others on a trip to Africa, where they see that Soviet politicians are competing for favorable status. We also get scenes from the inauguration with Pierre Salinger, and in a limousine, author John Steinbeck. After taking a director’s credit on Primary, Drew here assigns credit to Richard Leacock, Albert Maysles, D.A. Pennebaker, and Kenneth Stilson. All would soon being going their own ways. 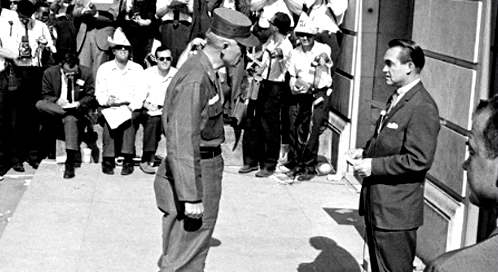 The most remarkable film of the bunch is Crisis: Behind a Presidential Commitment, where the vérité theory and the dynamite subject matter all come together. Alabama governor George Wallace is hemmed in by a Federal order to integrate the schools, but decides to take a stand when Attorney General Bobby Kennedy makes a test case of enrolling two black students Vivian Malone and James Hood in the University of Alabama. JFK has the National Guard standing by and RFK directs by phone from the White House, Robert Drew’s cameras show the action as it happens in both places. Wallace is swimming against the flow of history; old white ladies bless him on the steps of the state capital but all he can do is put up a big bluff. As for the Kennedy side of the deal, Bobby and his staff know they’re playing a public relations game. The clean-cut students Hood and Malone are playing their roles as activists making history. 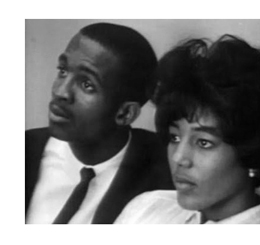 This time out things are sufficiently tense for us to believe that JFK might have asked the cameras to stop once in a while. Both Kennedy brothers surely have an eye on the film to go down as a record of their bravery in a crisis situation. Of course the ones at most risk in this media showdown are Hood and Malone; they have to walk the gauntlet of hate and fear on the University steps in Alabama.

Because of the drama of the situation, small things like the contrast between the home lives of Wallace and Bobby Kennedy feel very important. And the courage of Malone and Hood is very much in evidence. Crisis gives us a privileged look at something real and honest. The access to view the exercise of executive power was never granted again. Today’s government has a veneer of transparency, but anything of substance is carefully guarded.

We’re told that the original broadcast of Crisis covered some of the dialogue with narration, especially scenes where Kennedy discusses how his deputy is going to get past Wallace if push comes to shove. But Drew was allowed to retain this unexpurgated version.

The fourth and final film is the 12-minute short Faces of November. It’s a no-narration look at JFK’s funeral procession: the Kennedy family and other mourners walking behind the caisson, the prancing horse with the backwards boots, and many shots of the mourners lining the streets. It’s effective and tasteful.

The Criterion Collection’s Blu-ray of The Kennedy Films of Robert Drew & Associates goes far beyond the films themselves to give an in-depth analysis of Drew’s work in a way that no college course ever could. 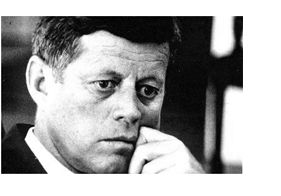 The films have been cleaned up in transfer, but things like the occasional hair in the film gate have not been touched. Again, the skill of the cameramen is remarkable. They know what the film stock can do; unlike many vérité-inclined films we see no focus pulls, stumbles or zooms as the cameramen try to find their subject.

Disc producer Issa Club doesn’t miss a trick, starting with the fat insert booklet (a real booklet again, hooray) with a fine essay by Thom Powers. The extras are all listed below but I particularly enjoyed the audio commentary on Primary, the interviews with the various vérité pioneers, the outtakes, and two new featurettes. Former U.S. Attorney General Eric Holder talks about the experience of Vivian Malone with her sister Sharon, who is also his spouse. Through them we learn more about Vivian’s experience as a test subject for integration, having to attend school in such a toxic environment. Author Richard Reeves gives us a great talk about John F. Kennedy’s career, with insights about his strengths and weaknesses, and his problems with sickness and pain management. All those ‘character’ photos of JFK holding his fist to his cheek aren’t posed; we’re told that the President is trying to distract himself from the constant pain.