It’s a Brit sex comedy that addresses the basic facts about boy-girl petting — and not much else. A noted ‘adult’ role for Hayley Mills, it pairs her with an unlikable Oliver Reed, trying his damnedest to affect natural charm. Was Reed the reason Hayley chose as her next picture a story about a lady studying penguins? 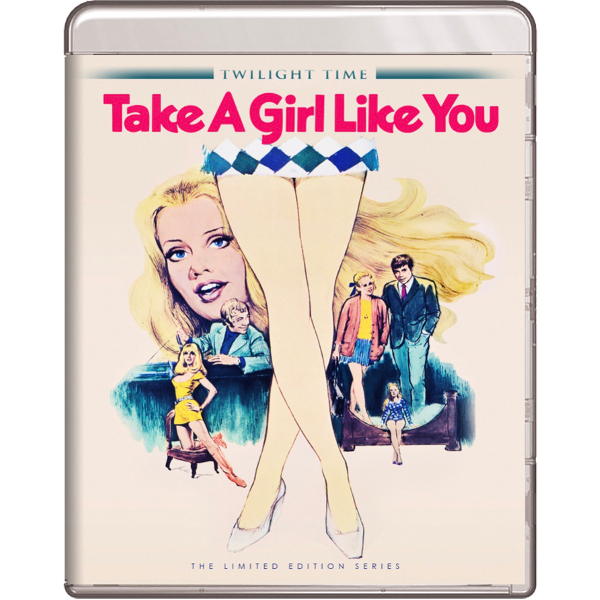 Wait a minute — when exactly did they finally stop calling young women, ‘birds?’

When the Hollywood studios all but collapsed at the end of the 1960s, the British Film Industry took a major hit as well. No more Yankee dollars pouring in curtailed production, especially of big-ticket productions with international appeal. Hammer Films suddenly had difficulty securing American distribution. With the loosening of censorship, industry veterans took whatever jobs could be found. 1970’s Columbia co-production Take a Girl Like You is a with-it sex comedy-drama made mostly by TV people. It’s the only feature directing credit for Jonathan Miller, who mostly specialized in classics for the telly — but also was heavily involved writing and performing on Beyond the Fringe, the comedy show with Peter Cook and Dudley Moore. Screenwriter George Melly had written Desmond Davis’s Smashing Time (1967) and little else. He adapted the novel by Kingsley Amis, a respected literary figure.

Try as she might, the talented child star Hayley Mills didn’t translate well to adult roles, probably because of her wholesome image. The ratings system coarsened the average run of pictures available for actors, and actresses like Susannah York and Hayley’s own sister Juliet went with the flow. It’s likely that Mills just felt more comfortable backing off.

Take a Girl Like You posits Hayley Mills in a much different world than her teenage picture Summer Magic. The virginal Northern schoolteacher Jenny Bunn (Mills) comes to a small provincial town and is immediately swept up in the petty issues of the Thompson boarding house. Her new landlord Dick Thompson (John Bird) is an obnoxious lecher; after a night of drinking he all but tries to rape Jenny. Dick’s fed-up wife Martha (Sheila Hancock) dismisses his awful behavior as business as usual; she has her hands full with his political run for local office for the Labour Party. Jenny is immediately pursued by Patrick Standish (Oliver Reed), a graphic arts teacher who is already sleeping with another of the Thompson’s tenants, Anna (Geraldine Sherman). Going to parties with the awkward Scot Graham (Ronald Lacey) and the wealthy landholder Julian Ormerod (Noel Harrison), Jenny is confused by the general setup, sexually speaking. Although Graham is too square to score, Patrick and Julian play the field with casual conquests, including the oversexed, birdbrained Wendy (Aimi MacDonald). Patrick rudely puts the moves on Jenny, trying to get her into bed on their first date and then sneaking her away from various functions without asking her first. When she doesn’t put out Patrick becomes personally offended. The consensus attitude seems to be that Jenny is making too big a deal about sex, that it’s her problem. After a number of unpleasant encounters, she makes a hard date with Patrick to ‘lose her virginity,’ only to balk when she finds that Patrick has announced it to Julian. They’ll take a girl like her, no question of it.

Despite its title Take a Girl Like You isn’t a vulgar comedy, not in the Music-Hall sense of the Carry On series and not in the new ‘getting it off’ British sex comedies that existed only to display topless women. As the consumer-driven notion of Swinging London began to fade, sex farces like The Best House in London mostly fell dead flat. America had its share of tasteless sex comedies as well, from A Guide for the Married Man to the repressed (constipated, actually) The Impossible Years, and the majority of comic spy pictures. In 1971, the widely distributed English comedy Percy gave us the adventures of the recipient of a penis transplant (Hywel Bennett), as various women tried to get his new graft to function. Hayley Mills would star opposite Bennett several times, but not on that one.

As had Rita Tushingham several times in the previous decade, Mills’ Jenny enters the story as a provincial girl riding on public transport. Rita encountered wolves and cheats, but some of them were charming. The dispiriting thing about Take a Girl Like You is its refusal to engage with its own subject matter. Dating a wolf like Patrick means being subjected to a full court press of mauling and groping, which she clearly seems to be enjoying (breaking news: Pollyanna gets felt up). Yet she has to say ‘No’ every thirty seconds, as Patrick respects no boundaries.

The pattern is pathetic. Patrick acts innocent or petulant as needed, always promising to behave. When they’re alone he immediately jumps her, breaking every promise. There’s no chemistry, just assault, yet Patrick makes Jenny feel as if she’s the one who needs to apologize, for not being ‘with it.’ Is this a political analogy? The situation isn’t helped by the casting of Oliver Reed, who punctuates his cute smiles with dark glowers that make us wonder how soon he’s going to start sprouting silver hair and fangs. There’s absolutely nothing to like in his character, even when the script makes Patrick the ‘victim’ of Wendy’s amorous advances. He’s supposed to be Anna’s boyfriend, but when she catches him wrestling with Wendy, or ditching her to sneak off to the woods with Jenny, Anna merely acts inconvenienced. Anna eventually becomes a supporting clown alongside Ronald Lacey’s ineffectual Graham, They’re left behind carrying the drunken Dick Thompson while Patrick sneaks off to canoodle with Jenny.

The one person Jenny opens up to is Noel Harrison’s thoroughly slimy Julian, a toff who owns a huge estate, drives a Pontiac Firebird and casually sleeps with whatever dolly bird ambles by. The message is the same — why are you ‘hung up’ on sex?  Jenny is in dire need of someone sane and caring, who doesn’t devalue sex as something that has to be done to get on with one’s life, like getting a driver’s license. It’s truly unpleasant to see Jenny make her personal choices under these conditions.

Take a Girl Like You in no way connects with social realities, as did those thoughtful Rita Tushingham and Lynn Redgrave pictures. No real context is shown for Jenny — her family is invisible and we never see her working as a teacher. We don’t know if Jenny is taking The Pill, the ’60s advance that made it possible for women to seek sexual equality. Don’t small towns everywhere have moral monitors looking out for potential gossip material? Jenny teaches small children, but nobody seems concerned that she’s attending parties with liquor and wild behavior. The freedom-lovers in Tushingham’s The Knack… and How to Get It! functioned under a constant shower of disapproval from old folk.

The story resolution may think that it offers an adult alternative to wishy-washy compromises of the past, but it’s wholly unsatisfactory. The women of the movie are uniformly treated like dirt, and Jenny’s decision feels like a total defeat, even if the final image tries to be ambiguous. After her frustrations in The Family Way, it’s as if Hayley Mills were being thrown to the wolves. She surely deserved more worthy film roles.

The explanation for this literally screwed-up picture comes from Kingley Amis’ source book, as reported by Twilight Time’s house scribe Julie Kirgo. The original Take a Girl Like You does take a more socially critical stance, and presents a harsher picture of Patrick Standish’s behavior as a believably selfish cad and dastard out for all he can get. It looks as if TV comedy writer George Melly simply wrote conflicting dialogue that pretends that Patrick is really a sincere fellow underneath it all. The result is that Patrick comes off as truly malignant.

A description given of a 2000 TV series remake of Take a Girl Like You indeed sounds more like something Kingsley Amis would write — its Jenny Bunn (Sienna Guillory) comes to work not in some quaint country burg, but a rough manor of North London. She loses her virginity Bill Cosby- style, by drinking too much at a party and simply being raped by Julian Ormerod.

In the Hayley Mills version it looks as if a serious story has been awkwardly adapted as a cute farce that assumes that ‘sweet young things’ in miniskirts are flowers to be plucked by bad boys with privileges. The film’s advertising tagline reads In this day and age, what’s a virgin to do? One piece of selected poster art shows Jenny holding her hands in front of herself, defending her … do you need me to draw you a picture?

We suspect that characters written as harsh have been performed and directed in a softer manner. With his showcase house, slick car and mod turtlenecks, Noel Harrison’s Julian has all the female company he wants without making the slightest effort. All smiles and glib niceties, the character is at heart a pretentious creep. He supports Dick Thompson’s run for office because he wants his property safe from incursion by a proposed airport. It is also arguable that Julian’s interaction with Jenny at the finale is a deliberate trap.

Julian is so studiously effete that many will interpret him as gay, even with his constant parade of dolly birds. He repeatedly tells Wendy to ‘shut up,’ but that’s not half as offensive as his eye-rolling reaction to a walk-through by a swishy gay character. The other characters are woefully underdeveloped. Sheila Hancock’s suffering wife should be sympathetic but isn’t, and Ronald Lacey’s Graham has insufficient self-esteem to earn our respect. And frankly, the way Jenny caves in to the stealth predator Julian and the deceitful lout Patrick, we lose respect for her as well. She shouldn’t have to deal with any of these people. If this were a John Milius movie, Jenny Bunn could take a bus to a pay phone a safe distance away and call in an air strike to wipe the town off the map.

Do English viewers more familiar with this cast perceive these characters differently? Looking at the IMDB, the completely unfamiliar John Bird appears to be a major TV star, as is Sheila Hancock. Aimi MacDonald, Imogen Hassall (When Dinosaurs Ruled the Earth) and Pippa Steel (The Vampire Lovers) receive mostly glamour walk ons, but may be familiar to genre fans. Ronald Lacey is surely best known for Raiders of the Lost Ark and Noel Harrison had a long career acting and singing, after starring in The Girl from Uncle.

The Twilight Time Blu-ray of Take a Girl Like You is a handsome encoding of this bright and colorful excursion into sexually-active frustration. Dick Bush’s cinematography helps Ms. Mills look fresh and cheerful without gimmicks; the pleasant greenery around town gives the randy characters plenty of attractive places to irritate each other. Even Patrick’s cute little convertible (a Morris Minor) is attractive. Don’t judge by the grab-bag of images found for this review, as the Blu-ray looks far better.

Presented in TT’s welcome Isolated Music menu choice, Stanley Myers’ bouncy soundtrack pretends that what we’re seeing is light and breezy. The title song by The Foundations won’t remind you of that band’s big (bubblegum?) hit “Build Me Up Buttercup.” What Hayley Mills fans really need are glorious remastered discs of her Tiger Bay and Whistle Down the Wind.