Elfin Rita Tushingham makes a smash film debut as Shelagh Delaney’s dispirited working class teen, on her own in Manchester and unprepared for the harsh truths of life. It’s one of the best of the British New Wave. 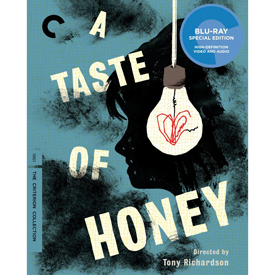 The British New Wave got a real shot in the arm with 1961’s A Taste of Honey. A stubbornly realistic drama about life in the lower working classes of Manchester, it was adapted from a near-revolutionary play by Shelagh Delaney, produced by Joan Littlewood. Here in the United States one had to be in a big city to catch the more obscure English films of the day. We teenagers associated this title with a pop tune recorded by the Beatles and then blasted everywhere by Herb Alpert. It was actually written for an American production of the play; Tony Richardson’s movie uses an eccentric original score by John Addison. Considered an adults-only release in the U.S., it certainly didn’t play my small town. I remember trying to see it on KHJ Channel nine from Los Angeles, on a 10PM Saturday showcase of ‘World Cinema,’ perhaps in 1967 or so. It was preceded by a stern title warning that that show is unsuitable for children. I was fourteen, but my parents were present and found a different channel. 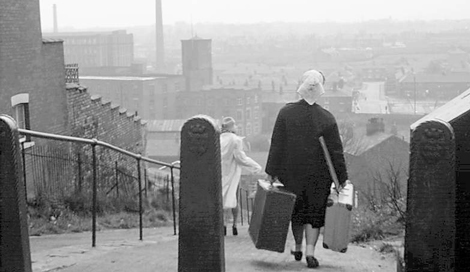 Reading about the British New Wave reveals that its beginnings were really theatrical. François Truffaut even complained that it wasn’t a film wave at all, but instead just gritty working-class plays given neorealist visuals, borrowing the theme of the Angry Young Man. Shelagh Delaney’s play is more about working-class malaise than social frustration. It vocalizes the problems of specific people that are too individualized to represent a class as a whole. And as its main characters are a female teenager and a young gay man, it brings entirely new subject matter to the screen.

Jo (Rita Tushingham of The Knack… And How to Get It) leaves school and moves across town when her mother Helen, a bar singer (Dora Bryan, The Fallen Idol) skips out on their rent. Helen decides to marry her boyfriend Peter (Robert Stephens of The Private Life of Sherlock Holmes), leaving the depressed Jo on her own. Jo gets a job selling shoes, and finds a tiny flat that one enters through a trash-strewn alley. She meets two very different young men. Jimmy (Paul Danquah) is a black cook on a freighter; they make an almost immediate physical connection. Geoffrey (Murray Melvin) is patient with Jo’s rocky moods and interested in her welfare. He’s also gay. 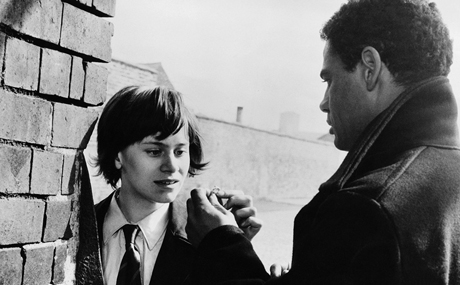 A Taste of Honey uses the semi-doc technique of the day: the B&W exteriors are rough & ready and sometimes hand-held. But the way the images immerse us in the gloomy Manchester light, the cobbled streets and worn old buildings look good anyway. Drifting on her own, Jo gives us a tour of the run-down parts of the city. The play is opened up, placing Delaney’s tough-sentimental characters in a context that motivates their lack of ambition. Helen just wants to get along and have a good time, and can’t understand why Jo seems so discouraged. The sour and complaining Jo soon alienates Peter, but she blooms under the quiet sweetness of the sailor, Jimmy. The first Angry Young Man movies had aired the specific grudges of men who felt dispossessed in an economy without opportunities. A Taste of Honey lets us see life through one of the millions of young Englishwomen faced with even bleaker future. The expressive Rita Tushingham brings an entirely new character to the screen, a realistic portrayal of the underclass. Jo has spunk and resilience only up to a point; with her sad little face we get the feeling that it wouldn’t take much for her to give up. Jo’s options are bleak. There’s no real future to be had with a sailor, and her friendship with Geoffrey is often an exercise in awkwardness. Yet he’s the one person to believe in her without reservations.

Delaney’s play belies the image of the lower class as weak and value-challenged. The dances and amusement piers are places of desperate mirth. Helen turns out to be a terrific dancer. At the funfair they smile in amusement at the nude tableaux exhibitions, something that had to be explained to me; the only other depiction of them that I’ve seen is the garish Circus of Horrors, from the previous year. Peter’s commitment to Helen isn’t very deep, but he does have to put up with a lot of abuse from Jo. Helen may be coarse but she eventually impresses as a survivor who loves life. Like Geoffrey, Helen wants to protect Jo as well; we see her step up to take responsibility when Jo really needs her. The daughter falls into the same trap that caught Helen – she’s pregnant and unmarried. [This ought to be a spoiler, but even one-sentence referrals to A Taste of Honey give it away, so…] 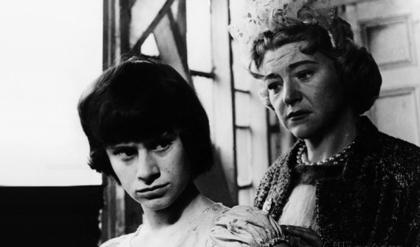 Some scenes are crushingly sad. Unprepared for motherhood, Jo strikes out in anger at a doll provided by The National Health to help young girls understand what having a baby will be like. Helen experiences a painful moment in Peter’s car, when his verbal abuse makes her want to get out and walk. No, she decides to stay, but we can tell that the relationship is finished. The essential resilience of the disadvantaged becomes apparent when Jo tells her mother about the baby’s father. Instead of collapsing or flying into a range, Helen shows a deep understanding. These proud characters seem fresh even now — ‘social comment’ relationships of this kind just didn’t appear in the English mainstream, which either idealized the poor or imagined them only in relation to their superiors.

Murray Melvin’s Geoffrey isn’t introduced as gay, although the character’s sexual identity settles in after a scene or two. A slightly horse-faced, amusing guy, we accept him as a thoughtful companion to Jo. He doesn’t think of himself as any kind of social cripple, although he seems to have erected his own personal defenses against the world. The Jo and Geoffrey connection feels like a real relationship, where one partner helps the other, and patiently waits for acceptance. Geoffrey shows a willingness to take responsibility for Jo, who has a tendency to play the Wounded Duck and question the motives behind his many kindnesses. But the better Brit New Wave films tended not to tie up character problems with happy endings, or even any particular resolution. A Taste of Honey ends with a tiny Guy Fawkes’ celebration, with Jo’s still uncertain face lit up by fires and sparklers, to indicate her continuing spirit. We’re left with three very rich and original characterizations. 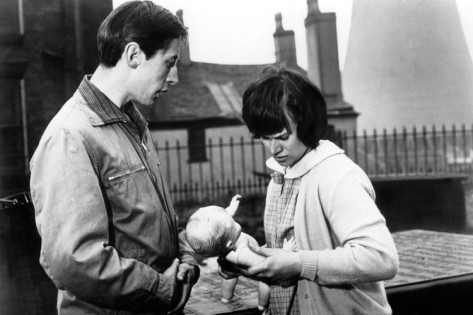 I enjoyed the talented Murray Melvin very much in Barry Lyndon and Alfie. His characterization makes A Taste of Honey a historically important film. Although this is Rita Tushingham’s first movie, it is seen much less frequently than The Knack…, where her provincial-girl-come-to-London seems a lightweight comedy extension of this story’s Jo. Dora Bryan begins the film as a disagreeable, dishonest frump, but by the finish Helen has grown in stature, and seems just adorable. A Taste of Honey is so fair with its relationships that we don’t condemn Helen when she plays the Mother Card to push Geoffrey aside. It does lead to a genuinely affecting moment: Geoffrey walks slowly away, carrying his baby bassinette with him. He’s tried and persisted and done his best; now he’ll move on. The finish has a unique tone; I don’t think the pop tune “A Taste of Honey” would fit the mood at all.

The Criterion Collection’s Blu-ray of A Taste of Honey is a superb rendition of this vintage Brit New Wave gem, much improved over earlier encodings. I saw some of it on TCM a few months ago, and the print had torn film, ragged dirt and a soundtrack just cloudy enough to make understanding the dialogue difficult. This new restored 4K scan recovers the film’s B&W patina of dusty gray Manchester dirt. Films like this and The Loneliness of the Long Distance Runner, Georgy Girl and Billy Liar, make us think of England in these years as existing in gritty B&W. The new scan also presents the soundtrack very clearly. John Addison’s music score makes generous use of kid’s street songs and the tunes heard on the funfair piers. 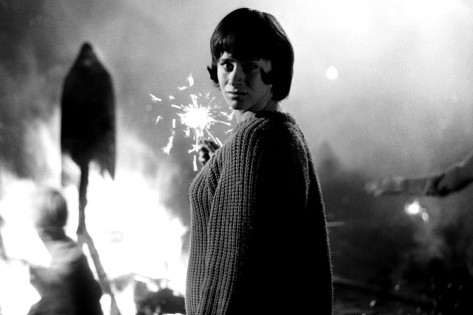 Fans will gravitate immediately to the lengthy interview featurettes with the film’s stars, Rita Tushingham and Murray Melvin. She talks about being chosen for the role out of a great many unprofessional applicants — it wasn’t easy for director Richardson to get around the industry’s insistence on hiring from within Actors’ Equity. Murray Melvin enthusiastically explains that he believes he was the very beginning of gay pride in England. When the play was produced homosexuality was still illegal, and banned as a theme in plays and films. We also get interview input from Richardson (an audio recording) and Walter Lassally, who gets very specific about the film stocks used for Taste. Theater expert Kate Dorney’s docu featurette Remaking British Theater: Joan Littlewood and A Taste of Honey, is an illuminating look at a woman whose theater broke all the rules. Ms. Littlewood also staged the original play of Oh What a Lovely War. Also included is Momma Don’t Allow, a music-oriented ‘Free Cinema’ short subject filmed by Richardson and Lassaly (and Karel Reisz) five years before. Colin McCabe contributes the insert liner essay.