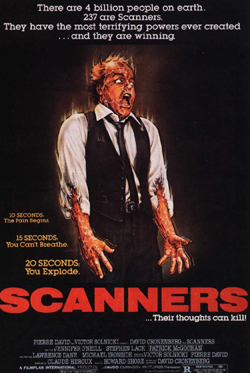 “10 Seconds: The Pain Begins. 15 Seconds: You Can’t Breathe. 20 Seconds: You Explode.”
Heads exploded at Avco Embassy Pictures when David Cronenberg’s Canadian telekinetic thriller grossed an unexpectedly hefty $14 million, setting the company on a course of profitable genre pix throughout the early ’80s. Two sequels (The New Order, The Takeover) and two spinoffs (Scanner Cop 1 and 2) appeared in the following decade. In 2007 a remake was announced but hasn’t happened.