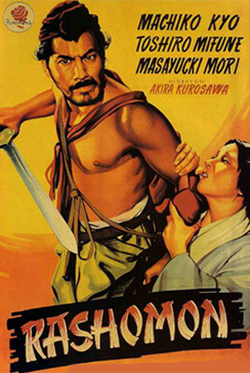 Rasho-mon is the name of the gate to the city of Kyoto, the medieval setting of the film that brought director Akira Kuroswa to international recognition. Despite daily battles with his unsympathetic studio backers, he produced a worldwide hit that rejuvenated Japanese cinema on the world stage, although it was less appreciated domestically. The concept of the unreliable narrator as it relates to the real nature of truth was not appreciated by Kurosawa’s peers, nor was his introduction of multi-camera coverage.