Sidney Lumet’s harrowing film is a true-life account of a NY narcotics detective- turned government informant; its length and intensity can be emotionally overpowering. Treat Williams is the idealistic cop who blows up his whole life and ends up betraying all the people he hoped to protect. He doesn’t seem to understand the ruthless, opportunistic nature of ‘systemic reform’ as he goes from good guy to the object of hate for both crooks and cops, and a target for the very same system that welcomed his help. The WAC made an excellent choice with this one — it’s one of the most deserving, underappreciated films of the early 1980s. 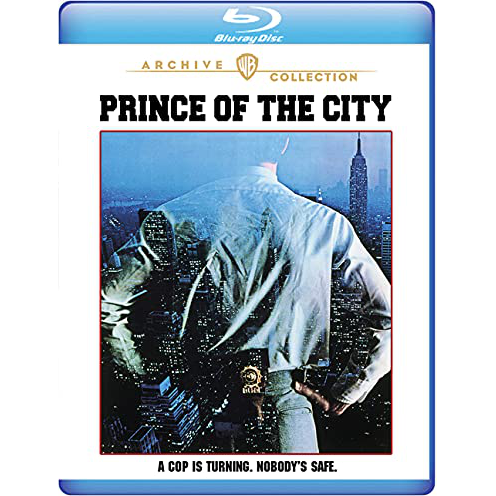 Director Sidney Lumet was a prolific moviemaker, one that refused to settle into a particular style. He became known as an actors’ director who helped stars and newcomers deliver some of their best work. His work runs hot and cold; this reviewer admires more than half of his output. Many of the shows that work less well are noble, risky undertakings. His Eugene O’Neill adaptations are exemplary, even if occasional high visibility projects fizzle: The Fugitive Kind, The Group. Lumet gave Sean Connery some excellent 007-breakaway pictures. His classics are definite crowd-pleasers: 12 Angry Men, The Hill, The Anderson Tapes, Serpico, Dog Day Afternoon, Network, The Verdict.

A good example of a brave Lumet film is Prince of the City, a talky cop show that hasn’t a great deal of action and crowds the clock at a few minutes short of three hours. Lumet believed in the source material so much that he cast not a film star, but Treat Williams, a respected and admired stage actor with only two major films to his name. Williams carried the lead role in Hair but his good comic turn in 1941 did him no favors. As Danny Ciello, Williams runs with a fantastic leading part — a flawed character in a great movie that has ‘feel bad’ written all over it.

We’re told that this film project and the 1982 Scarface bounced between Lumet and Brian De Palma for a while, before Lumet and Jay Presson Allen came up with the final screenplay for Prince. Relentlessly literal, it’s the story of a NYPD detective assigned to a special crimes squad, who has a crisis of conscience and decides to become an informer for various agencies investigating police corruption.

Detective Danny Cielo (Treat Williams) and his close-knit group of narcotics police have a high reputation for getting meaningful convictions. But it’s obvious that they bring in more money than their NYPD salaries. Danny’s wife Carla (Lindsay Crouse) and the other wives ignore that fact, but his father and brother notice every day. Discouraged and disillusioned by the job, Danny goes to work for Assistant U.S. D.A.s Rick Cappalino and Brooks Paige (Norman Parker & Paul Roebling), ambitious men with Ivy League backgrounds. For months Danny rings up impressive results, sometimes wearing a wire and sometimes not; he targets mobsters who think he’s on the take, dirty cops in other precincts and squads, and even a crooked bail bondsman. He makes a rule that he won’t rat on his own buddies, in his own unit, a deal that is observed… for a while. Rick and Brooks are soon given impressive promotions based on Danny’s work, which leaves him in the hands of other government prosecutors. They see him as just another dirty cop — and a conduit to advance their careers. The most ruthless is Santimassino (Bob Balaban), who doesn’t recognize any of Danny’s prior ‘agreements.’

When Danny’s identity is leaked his family must go into witness protection indefinitely, while the goverment slowly makes their legal cases with Danny’s undercover evidence. The mob wants him hit. Danny’s friends and colleagues become worried that he will name them as well. But Santimassino’s intention is to milk Danny dry, and then prosecute him as well.

Prince of the City begins with a successful raid of a drug ring conducted by the pro squad that Danny belongs to; six or seven experienced cops that work exceedingly well together. They’re practically celebrities; when they have a good bust judges let them cut in line in the courtroom. But Danny’s Catholic conscience has been after him to blow the lid on everything. The thievery is one thing, with cops simply on the take. They also seize drugs and blackmail criminals for more money. Danny is sickened by the injustice he sees in the way the system functions. All of his unit’s cases rely on informants, more often than not terribly sick junkies living miserable lives, and risking getting killed. They’re paid off in drugs, which is strictly illegal but the only way to secure their cooperation. So Danny and his cops are technically just as much drug peddlers as are the criminals.

The actual policeman on whom Danny Ciello was based must have been terribly naive, or seeking some kind of atonement for his sins — it’s difficult to believe that the experienced Danny wouldn’t know that any attempt to ‘do the right thing’ in this situation could only lead to disaster for those he cares about and loves. Danny feels responsible for his informant junkies, lost souls that beg him for help and betray each other for their next fix. When he spends half of a cold, rainy night trying to help one of them, it’s clear that he lacks the stone cold indifference to suffering that the job requires. Danny hits it off with Rick Cappolino and to a lesser degree Brooks Paige, Assistant D.A.’s that care about the risk that Danny is taking, yet definitely have advancement as their first priority. Danny is happy when their success brings them big new jobs in the federal government. But that leaves him in the hands of other prosecutors that are strangers, with no reason to regard Danny as anything but expendable.

The tragedy is that Danny thinks that the system works, and that the removal of a few bad men will change things, do good. His decision to inform comes in an all-night confession to his new A.D.A. friends, in which he talks himself hoarse. He’s a fool to think that the endless string of prosecutors and D.A.s that ‘inherit him’ will protect him, they way he tried to care for his own informants. No, despite their friendly attitudes, they see Danny as the enemy as well.

Roughly the first half of this long movie charts Danny’s progress until he’s thoughtlessly outed to the press. At that point Danny and his family begin living with U.S. Marshall Tug Barnes (Lane Smith) a witness protection agent. Just looking at Barnes’ I’ve-seen-everything face, we know life is going to be miserable. Danny’s home life is destroyed — his wife and kids are cut off from everything they had. Of course it’s not long before Danny is forced to inform on his own colleagues and even family members with crime associations. He’s advised that those ‘miminal’ bad things he admitted to when he began, aren’t so minimal. And what about those junkies that he provided with illegal drugs?  If his testimony is purjured, the Feds will indict him as just another dirty cop.

Sidney Lumet wrote that Prince of the City appealed to him because he thought his earlier hit Serpico wasn’t quite right. This movie’s cop is less charismatic; his dilemma is applicable to anybody who tries to be honest about his work in a large bureaucracy that preaches one agenda but in practice follows another. The film has the same issues of other crime pictures, with a lot of faces to remember, and all those Italian names!  But the running time is long enough to tell the story properly.

It’s also long enough to exhaust and demoralize us. After decades of ‘crime does not pay’ and ‘honesty is always the best policy’ messages in complacent Hollywood movies, the realism of the 1970s taught us a different lesson: stay away from involvement in police work. Informants and witnesses are routinely killed, or subject to terrible retribution. If interviewed by the police, any information you give may indeed be used against you, or someone you care about… police interviewers aren’t there to be nice to you, but to do their jobs. The government men we see are of course all attorneys. If movies like Prince of the City are accurate, avoiding ANY contact with the law is a terrific idea. (Yet we hope they’ll protect our lives and property!) 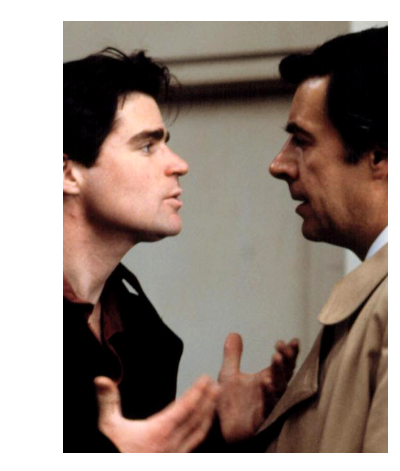 It’s hard to imagine a more credible ensemble cast than what was assembled by Lumet’s team — the narcotics men really look like a team, even Jerry Orbach, all distinctive but none ‘actorly.’ The hoods and crooks feel like ‘just guys’ as well — albeit guys from very rigid criminal backgrounds. Only the government men come off as creeps — was this entirely intentional?  They’re the ones that openly lie for advantage, hiding behind their official functions. Even the hoods in their own slimy way are trying to establish trusting relationships. If we didn’t know how egregiously the narcotics unit broke the law, we’d consider Danny Ciello a villain. He is the white knight who hasn’t the imagination to see what chaos and misery will result when he pulls back the lid on this thing.

Sidney Lumet purposely stayed neutral on the issue of whether Danny is right or wrong, a hero or a villain/patsy. This I think accounts for the film’s lack of success. It’s not funny like Dog Day Afternoon and the main character isn’t an admired star given showcase treatment, like Al Pacino’s Frank Serpico. Treat Williams allows Danny Ciello to become a flawed everyman. We can all second-guess his decisions in comfortable hindsight — our tails aren’t on the line. Audiences respect Williams, but they don’t cozy up to him.

Lumet would tell us that he just let his actors loose, that his only work was to blend the non-actors with the pros. The director hasn’t the need or the drive to make things cinematic or stylish like, say, Martin Scorsese — there are no bravura single-shot masters and no trendy needle-drop cues. In his book Lumet said only that he used lighting and sound to slowly isolate Danny Ciello, either in the frame or in the soundscape. Backgrounds become darker in the final third. He dropped out much of the ambient sound by the final act, leaving Danny in a hollow void. It makes a psychological impact of which we’re not consciously aware.

The Warner Archive Collection Blu-ray of Prince of the City is the expected immaculate transfer with clean sound. HD allows the colorist to leave dank scenes dank, to not even out everything for standard NTSC levels (as can be seen in the included featurette-docu). The show does have a docudrama feel, letting rooms lit by fluoresent light look ugly, and a junkie’s crash pad come off as a black hole. This doesn’t always look attractive — in some scenes Treat Williams’ jet-black hair looks like an inky blob. But the show always looks right– and viewers need to know that a generation of ‘gritty’ cop shows might owe a lot to this picture.