Marlon Brando is back in an adaptation of Tennessee Williams’ play Orpheus Descending. The cameraman is Boris Kaufman and the director is Sidney Lumet; Marlon’s a classic tomcat drifter in a dangerous parish, who attracts two women. Acting styles mesh, or mix without blending — Anna Magnani and Joanne Woodward each get opportunities to shine. It’s all poetics and symbolism — dig the snakeskin jacket! — in a fairly realistic setting. 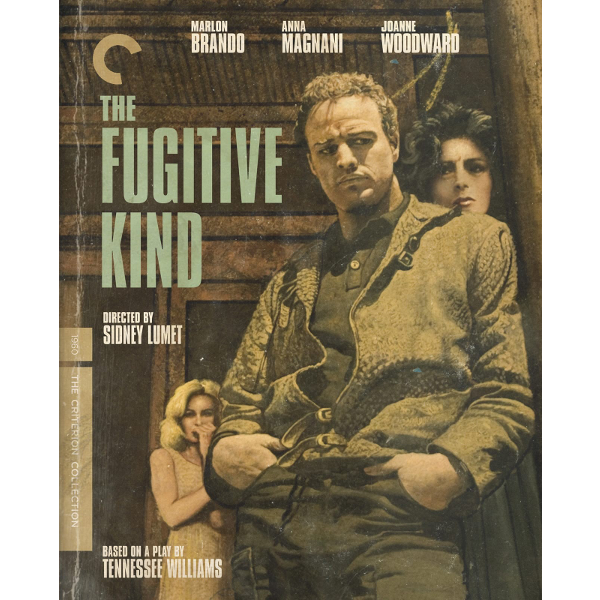 Tennessee Williams sometimes seemed a continuation of William Faulkner’s literary legacy. This story’s Valentine Xavier has a lot in common with The Long, Hot Summer‘s Ben Quick, a sexy drifter with a reputation for burning down things — barns, women.

Williams’ plays made history on Broadway but his cinematic reputation was established early on with Elia Kazan’s film version of A Streetcar Named Desire. 1959’s The Fugitive Kind is adapted from Orpheus Descending, which is not one of the author’s best works. But the talent involved couldn’t be more ideal. On only his fourth film, former stage actor and TV director Sidney Lumet had become a hot property by virtue of his claustrophobic 12 Angry Men, a film set almost entirely in one jury room. Carried over from the Broadway cast of Orpheus are actors R.G Armstrong and Maureen Stapleton, who had played the lead role on stage. Tennessee Williams was so impressed by the remarkable Italian Anna Magnani, he had already written an entire play just for her. Marlon Brando was of course considered the ideal Williams leading man. Beyond his status as a hot star commodity and his prowess as a male sex symbol, Brando was one of the few candidates who could put across Williams’ crowded thematic agenda.

Although the stage play had failed in two attempts spread over twenty years, The Fugitive Kind works rather well as a film. Sidney Lumet’s realistic approach softens some of Williams’ classical allusions and mythological overtones. Marlon Brando is the melancholy, rootless musician Valentine Xavier (read: “Lover – Savior”). Val describes himself through a fable about a strange bird with no feet, that must live and sleep on the wind without ever touching the ground. We wonder if this idea inspired Marianne Faithful’s classic song This Little Bird. It’s the exact same fable, right down to a description of the bird’s transparent wings.

Banished from New Orleans by a judge, Val lands in a tiny Mississippi town seemingly founded on greed and racism. Vee (Maureen Stapleton), the addled and skittish wife of Sheriff Talbott (R.G. Armstrong), takes Val in out of a storm and lets him sleep in a jail cell. The sheriff is in a good mood, as he has just shot dead an escaping prisoner. Val gets a job clerking in a general store and is soon involved with two more women. Lady (Anna Magnani) runs the store but hates her life, as her husband Jabe Torrance (Victor Jory) is a domineering tyrant confined to his sickbed. Free to run the business as she sees fit, Lady sees Val as a good partner in her plan to open an Italian-themed wine garden behind the store. Also loitering about trying to seduce val is Carol Cutrere, a local scandal from a privileged family who knows him as ‘snakeskin,’ from a shameful alluded-to party. Val advises Carol not to run so wild. Lady and Carol don’t get along, because Carol’s rich brother David (John Baragrey of The Colossus of New York) threw Lady over years ago in favor of a more socially advantageous marriage. Things heat up as Torrance becomes aware that his wife and Val are having an affair. Both he and Sheriff Talbott hate everything Val Xavier stands for.

A series of dark character collisions that can only lead to tragedy, The Fugitive Kind is organized around poetic harmonies. Val Xavier’s leather jacket has earned him the name Snakeskin, and his undisclosed crime back in New Orleans has something to do with wild ‘parties’ that sickened even him. Val tells Vee that, “you’re not young at thirty if you’ve been on a party since you were fifteen.” He’s aware of his effect on women and assures Lady that he “can burn a woman down.” In Tennessee Williams terms, Val is of course a symbol of life that the corrupt world must crush.

Personal freedom is the issue with the women in Val’s life as well. Italian immigrant Lady is trying desperately to recover the happiness she lost years ago. Because Lady’s father sold liquor to blacks, local racists torched his house, orchard and wine garden. The old man died in the fire. After being jilted by David Cutrere, Lady submitted to a soul-crushing marriage to the horrible Jabe Torrance. The highly sensual Anna Magnani is an even more arresting screen presence than Marlon Brando. 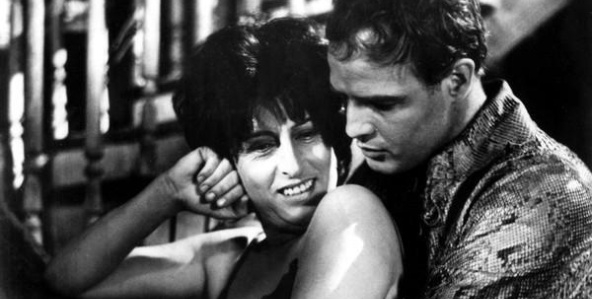 Wearing a ratty dress and driving a dirty sports car, Carol Cutrere is perpetually drunk and in trouble. She makes a lewd spectacle of herself in a diner, and later receives a bloody nose in an altercation with a gas station owner. Carol’s rich relatives consider her an embarrassment and pay her to stay away from home. We learn that Carol’s antisocial behavior began after an attempt at civil rights activism. One of her companions now is Uncle Pleasant (Emory Richardson) a speechless vagrant Conjure Man. In an unusual role, Joanne Woodward seems genuinely uninhibited and out of control as the reckless Carol.

Sidney Lumet maintains a reasonably naturalistic look for The Fugitive Kind, but for certain dramatic highlights cameraman Boris Kaufman employs more stylized lighting and framing. Val enters town in a rainstorm and takes a midnight trip with Carol to a spooky cemetery. Circus music from a calliope gives the final act a dreamlike tone, enhancing Lady’s enchantment with her new wine garden. The vineyard decorations trigger Lady’s memory of better times. Draping herself with tinsel, Lady compares herself to a barren fig tree from her youth. When the tree finally bore fruit, she decorated it in celebration. Aided by the film’s visuals, the characters become the symbols playwright Williams lays out for them. 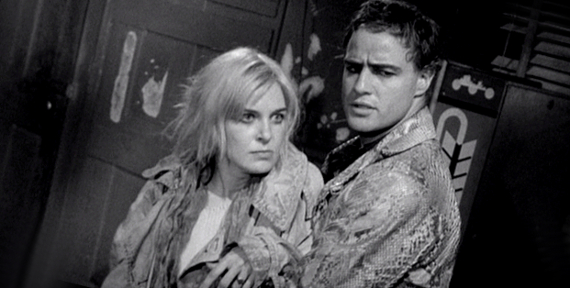 Other more earthy dramatic moments are handled without embellishment, as when Val accuses Lady of trying to set him up as a live-in gigolo, and when Lady protests that Val is leaving to run away with Carol. Accounts of the filming vary as to how well the stars did or didn’t get along with each other, but the on-screen fireworks are as good as anything either actor has done. Brando negotiated the first million-dollar actor’s salary for The Fugitive Kind. He hadn’t yet become bored with acting, and is definitely engaged with the role.

The conclusion is somewhat abrupt. The hatred mounting against Val and Lady explodes in a blur of fire, water and gunshots, closing the show with a synbolic conflagration that would be appropriate for a Vincent Price horror film. Much more notably disturbing is a brief scene in which Vee Talbott staggers down Main Street in a panic because she’s suddenly been struck blind. Only viewers familiar with the play Orpheus Descending will know what has happened, but the movie’s lack of a direct explanation makes The Fugitive Kind seem even more unbalanced. 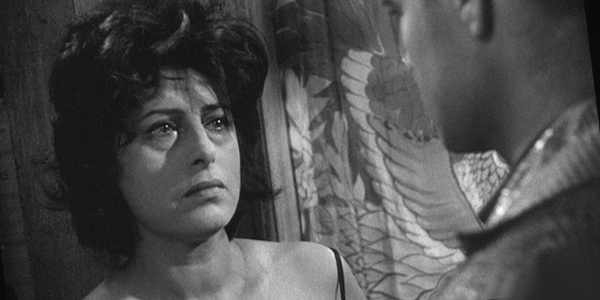 The Criterion Collection’s Blu-ray of The Fugitive Kind appears to be the same Hi-Def transfer from 2010, now in Blu-ray and looking better for it — the fine art direction and Boris Kaufman’s careful visuals are improved with the extra detail, keeping the show on the edge between Southern realism and staged theatricality.

The extras, also from 2010, are perfectly matched to the film by disc producer Abbey Lustgarten. Two sit-down interviews last a half-hour each. The late Sidney Lumet talks openly and proudly about the show, which he describes being a difficult shoot, mainly due to the conflicting styles and preferences of Brando and Magnani.

The detailed discussion of theatrical and film production continues in a second video hosted by authors Robert Bray and R. Barton Palmer examines Tennessee Williams’ work in Hollywood and his attitude toward the movies. The commentators say that, after Elia Kazan’s film of A Streetcar Named Desire vastly increased the playwright’s audience, Williams became critical of Kazan and named Sidney Lumet as his preferred director.

A Television show from 1958, Three Plays by Tennesee Williams appears as a B&W Kinescope. The three one-acts lead off with Moony’s Kid Don’t Cry, (1941) a domestic scene between Lee Grant and Ben Gazarra; the other two are The Last of My Solid Gold Watches and This Property is Condemned (both 1946). Williams introduces the show by telling the audience that the plays were written long ago, when his name was simply Tom Williams. David Thomson contributes an essay for the insert booklet.