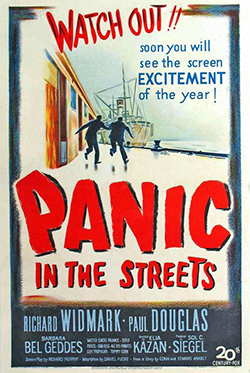 Panic in the Streets

Before Contagion, before Outbreak, there was this scarifying 50s germfest. Shot semi-documentary style on evocative New Orleans locations, Elia Kazan’s sixth feature outing incorporates film noir elements into its story of US Public Health officials trying to prevent a plague from spreading through the populace via some infected criminals. Film debuts of Jack Palance and popular moppet Tommy Rettig.