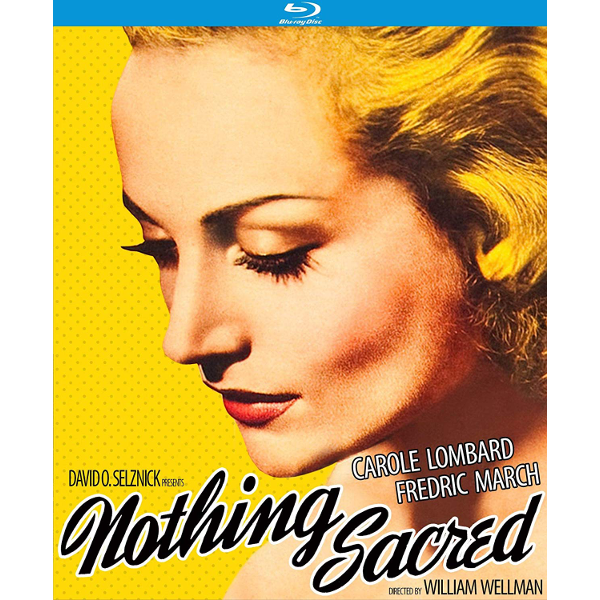 Here’s something we didn’t expect to see. When I reviewed an older Kino disc of this title, I gave its so-so transfer a pass because I believed it might never look better. That sad situation still holds with many films filmed in original 3-Strip Technicolor, as the work needed to restore them, when restoration is even possible, is prohibitively expensive. But something special has apparently happened in this case: as show that was always contrasty and harsh now looks great!

The delightfully cynical Nothing Sacred holds a proud place at the center of the Screwball Comedy tradition. Just a mention will elicit broad smiles from people that have seen it. Ben Hecht’s disarmingly witty screenplay embraces what in 1937 had to be considered sick, morbid humor. One wouldn’t think that the plight of a beautiful woman dying of slow radiation poisoning would promise big laughs. The satire targets the competitive New York tabloid papers that feed the public’s voracious appetite for maudlin news. Ex- newspaperman Hecht opens his tale with a mock-pious quote lauding the heart of a great city, and then proceeds to demolish his own premise. Nothing Sacred is the third great Screwball from Carole Lombard after Twentieth Century, the 1934 Howard Hawks film that helped launch the fad, and Gregory La Cava’s hilarious My Man Godfrey. Continuing the eccentric title sequence idea begun in My Man Godfrey, the opening gives us images of little porcelain statue-caricatures of the leading players. The sarcasm begins early and doesn’t let up. The victim of a cheap hoax, the Morning Star’s star reporter Wally Cook (Fredric March) has been exiled to the obituary department for embarrassing his boss, publisher Oliver Stone (Walter Connelly). To make amends Wally rushes to the small Vermont town of Warsaw to get a tear-jerking exclusive on Hazel Flagg (Carole Lombard), a young woman expected to die in just a few weeks from radium poisoning. The locals are hostile to all strangers, particularly those from the big city. It just so happens that Hazel’s quack of a doctor, Enoch Downer (Charles Winninger) has discovered that his diagnosis was completely wrong, that she isn’t going to die after all. Excited by the prospect of being flown south for an all-expenses paid madcap Manhattan weekend, Hazel decides not to inform Wally about her miraculous ‘recovery.’ Greeted in Manhattan as a combination angel and martyr, Hazel is cheered by thousands and given the Key to the City. She’s toasted and sobbed over wherever she goes. So touched is Wally by the beautiful Hazel’s courage that he’s inspired to propose marriage, for the little time Hazel has left. Oliver is overjoyed to be sponsoring such a newsworthy, and non-fraudulent, person. Hazel is soon worrying that her little fib will get both her and Wally tarred and feathered.

Nothing Sacred begins with a joke that completely justifies the film’s title. A black potentate from the Far East has promised to fund the construction of a vast civic project sponsored by the Morning Star. The only problem is that the Magi in a turban (Troy Brown) isn’t exactly who he says he is; the punchline is outrageous, non-PC and hilarious. Writer Hecht next aims his lampoon at the hostility that rural hicks save for big city slickers. A monosyllabic baggage man (Olin Howland) and a stingy storekeeper (Margaret Hamilton) shock Wally with their rudeness and lack of generosity. It’s so bad, a tiny kid runs out and bites Wally on the leg, just out of meanness. It’s especially gratifying to see Fredric March suffer these slapstick indignities, after playing so many stiffs in high-toned dramas like Anthony Adverse.

The movies really lost something when Carole Lombard was killed — she and Clark Gable may have been Hollywood’s top couple for the next twenty years. She plays Hazel Flagg like a kid in a candy store. She’s so bored with rural Vermont that never considers the consequences of her deception. A group of bearded medical experts (including Sig Ruman and Monty Wooly) immediately realize that the Morning Star can’t afford to be accused of perpetrating another hoax. After examining Hazel, they adjust their bill for services for keeping the results confidential. Meanwhile, the Big Apple’s generosity is expressed in ever more grotesque ways. One nightclub builds an entire floorshow around Hazel, comparing her to great women in history. Everywhere she goes, Hazel sees New Yorkers weeping, thinking about her imminent demise. And she doesn’t know how to handle Wally’s reverent, worshipful gestures. No wonder she gets totally soused.

Hecht has an ornate way of having characters describe each other. Wally Cook on Oliver Stone:

“He’s sort of a cross between a Ferris wheel and a werewolf. But with a lovable streak if you care to blast for it.”

“You’re a newspaperman. I can smell ’em. Excuse me while I open the window.”

Looking at a silly wrestling exhibition, Wally pronounces them phonies, and then adds,

A montage of cynical headlines and signs honoring Hazel Flagg is a string of jokes worthy of Tex Avery. One newspaper dripping with concern for Hazel is shown being used to wrap a fish.

Director William Wellman avoids clever camera tricks but imposes his own brand of eccentricity. In one scene, the ex-Eastern potentate casually enters Hazel’s hotel room to filch a bouquet for his wife out of the many floral honorariums sent to ease Hazel’s demise. When Oliver Stone needs a thug to drag Hazel back to his office, the nod goes to an ex-wrestler played by the unflappable Slapsie Maxie Rosenbloom. Max’s telephone manners are hilarious in themselves. Wally and Haze’s first intimate scene is a conversation framed so that a large tree blocks the actors’ faces. Wellman had a penchant for staging important moments with big parts of faces obscured; it certainly strips away any thoughts of sentimental cliché. Interestingly, Hazel’s purported malady is based on a real, horrifying event from the golden age of the New York tabloids. Her hometown is dominated by a watch factory, and in 1917 an appalling worker safety scandal broke out in the industry that manufactured glowing radium dials. The Radium Girls fell sick and died through the criminal negligence of the factory owners, who knew the danger well. They shielded technicians and scientists, but hid the truth from workers that painted the radium on the watch faces. The practice went on for years, and should be taught in schools as an example of the ruthlessness of unregulated free enterprise. The workers at one Illinois Radium Dial plant were called ‘The Living Dead Women.’

Beneath Hecht’s gleeful cynicism is an accurate picture of these death factories. Vermont’s Warsaw is run and controlled by a Radium Watch company, which the nasty locals cite when they refuse to talk to him. Reporters may be aggressive, but they’re all we have to uncover abuses like this. Wally Cook’s plea to his boss, talking about ‘doom staring Hazel Flagg in the face’ would seem to have inspired John L. Sullivan’s cinematic pursuit of profitable misery in Preston Sturges’ Sullivan’s Travels. The hunger of the Morning Star for new tragedies is just a few steps away from the venality of the American media monster in Billy Wilder’s Ace in the Hole. The Hecht love affair with naughty, arrogant newspapermen of course started with The Front Page, which was followed by scores of movies about conniving, underhanded reporters and editors.

Much of the comedy is black, almost Charles Addams black, with mordant jokes mining the fundamental Bad Taste of society. Tthe newspaper’s exploitation of Hazel Flagg’s terminal illness is only the tip of the iceberg. ‘Thirties audiences likely considered the film’s tone to be Sophisticated, but we know it as good old-fashioned Sick Comedy, done with class.

Because the threat to Hazel is dispensed with almost immediately, we’re left to laugh at the spectacle of a media darling without a malady to stand on. Despite some amusing third-act reversals the macabre concept ultimately hits a brick wall: how can a story this twisted be wrapped up in a satisfactory manner? Producer David O. Selznick hired a brace of top writers to hammer out an acceptably upbeat conclusion. Nothing Sacred doesn’t let us down, but even confirmed fans often can’t recall exactly how it ends. Nobody would call this a message picture, but it does express some truths about an American public that was media-mad, even in the 1930s. Reality isn’t enough; we always crave bigger-than-life winners and losers, villains and heroes. The KL Studio Classics Blu-ray of Nothing Sacred is quite a pleasant surprise. I’ve never seen an original print projected, and had long ago decided that the best the picture could be was the contrasty, rather garish-looking video transfers made from surviving Technicolor prints. The black actors fared particularly badly, almost becoming silhouettes with bright white eyes. The darkening effect was so strong in some shots, it almost looked like an intentional racist joke.

1937 was only the second or third year of three-color Technicolor being used on features. The harshness of some early IB Techn pictures on video sometimes makes us forget that pictures like Northwest Passage and Garden of Allah (another Selznick production) looked really sensational in original prints.

Nothing Sacred essentially gets a new lease on life: it now looks very, very good, with soft colors and a smooth contrast scale — we can even differentiate a couple of levels of black in dark scenes. Carole Lombard’s face no longer looks colorized, with splashes of red where the blush has been applied (older transfers pumped the chroma to maximize the color). Don’t get me wrong, some of the makeup choices still stand out. Fredric March appears to wear as much makeup as Lombard, and his lips are unnaturally pink. If I recall, two years later Gone With the Wind was lauded for its more naturalistic use of color. As late as the 1950s, some filmmakers shunned color, which they regarded as a decorative distraction.

Please note that none of the images provided here properly record the new improved color. The audio is refreshingly clean as well… Oscar Levant’s original music score is no longer broken up by splices, pops and dropouts.

Kino’s disc has a new commentary by William Wellman’s son, who has done an excellent job of husbanding his father’s legacy, through documentaries and his support for a massive limited edition book released last year. The commentary is rather sparse, with big gaps between statements. But the information is solid: we find out that Carole Lombars’s plane crash also killed fifteen soldiers, Clark Gable’s press agent and Lombard’s mother as well. An amusing vintage trailer is also included.

What strikes us now about Nothing Sacred is Ben Hecht’s florid language, and his habit of presenting New York City as a major character in its own right. When Hazel Flagg pens a suicide note, she thanks not to the newspaper but to the city itself. The same reverence for The Big Apple carries through several of Hecht’s scripts, including the strange sentimental winner from 1956, Miracle in the Rain. It uses a lofty narration up front, instead of poetic text titles. After being turned into a Broadway musical, Nothing Sacred was reimagined as a 1954 comedy vehicle for Dean Martin and Jerry Lewis called Living it Up.