For my money this is the brightest, most endearing and wittiest ’30s comedy to be given the name ‘screwball.’ Everyone on screen is flawlessly magnificent — Carole Lombard, William Powell, Alice Brady, Gail Patrick, Jean Dixon, Eugene Pallette and Mischa Auer — and Gregory La Cava’s direction is so good, it’s invisible. No kidding, I’ve never watched this with a group or individual that didn’t immediately rank it among the best entertainments they’ve seen. 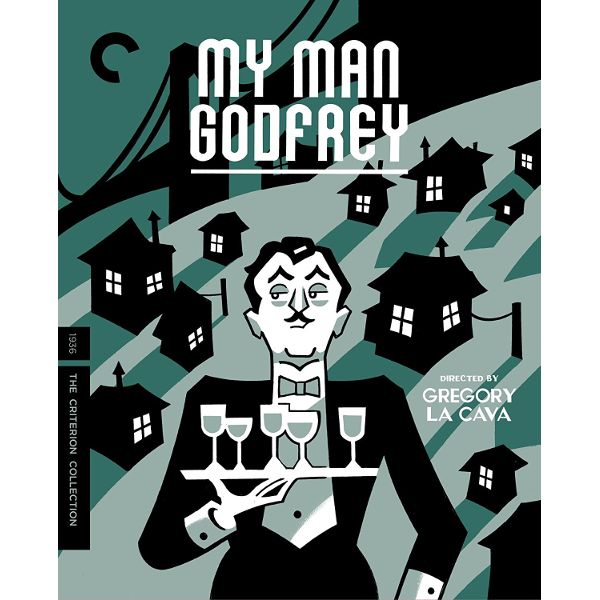 Screwball comedies of the 1930s go in and out of style, depending on what the mood on the street is regarding Howard Hawks’ version of male-female relationships, or Leo McCarey’s freestyle approach to making up comedy as he goes along. Star magnetism enters into the equation as well. Viewers of TCM are beginning to gravitate toward anything starring Irene Dunne, although one must navigate her maudlin RKO dramas before getting to her string of lightweight comedy greats. I’m not sure if Fred MacMurray was ever really funny, but he was good backup for marvelous actresses like Claudette Colbert and Barbara Stanywyck, who made everybody look good. MacMurray did several celebrated screwballs with Carole Lombard, but her best comedy work has to be her peerless dizzy dame in 1936’s My Man Godfrey. Everybody in this show shines. Her leading man William Powell is just as strong, in a wild farce that earns its warm finish — by which time we love all of its characters. The flawless direction is by Gregory La Cava, who made some real winners: the classic Stage Door and the eccentric, edgy Primrose Path, but also some racy pre-Codes and the bizarre political nightmare movie Gabriel Over the White House.

My Man Godfrey is a Fairy Tale fantasy about the lovable Fifth Avenue family of rich, kooky eccentrics. Whereas some screwball comedies take pride in a semi-absurd ‘anything goes’ approach, Morrie Ryskind and Eric Hatch’s witty script doesn’t rely on outrageous slapstick. The characters actually make sense, even if they don’t resemble anyone we’re ever likely to meet. The charming leading players make the craziness seem so natural, the authors’ social statement emerges without being forced. The seamless comedy construction makes assigning its success to any single aspect — direction, screenplay, performances — very difficult.

In short, Godfrey is about as perfect as a movie comedy can be.

Squatting in an East River ash-pile dumpsite, the tattered and unshaven Godfrey (William Powell) appears to be an unusually self-possessed, erudite bum. The wealthy, air-headed Irene Bullock (Carole Lombard) picks him up in her limo and whisks him off to a downtown hotel lobby to be her winning find in a snooty, high-society scavenger hunt: a Forgotten Man. When Godfrey asks for a job, Irene tries him out as a butler to her family. The Bullocks are a flamboyant bunch of zanies, the nuttiest collection of dysfunctional folk on Manhattan Island. Irene is flighty, impulsive, and charming. Her competitive and somewhat sadistic sister Cornelia (Gail Patrick) broods and schemes. Their mother Angelica (Alice Brady) is a featherbrained ditz who keeps a mooching ‘protegé’ named Carlo (Mischa Auer) on a gilded leash. The portly Bullock father Alexander (Eugene Pallette) is a dour stockbroker with money woes. Pops bemoans his inability to rein in his family’s party-night shenanigans — Irene has brought home a horse, and Cornelia broke a row of windows on 5th Avenue. Godfrey’s first on-the-job morning is a trial by fire. Although the cynical maid/cook (Jean Dixon) predicts failure, the new butler’s limitless charm and tact win over all but one of the Bullocks. Of course, we discover that Godfrey is not entirely the no-account vagrant he seemed at the beginning. 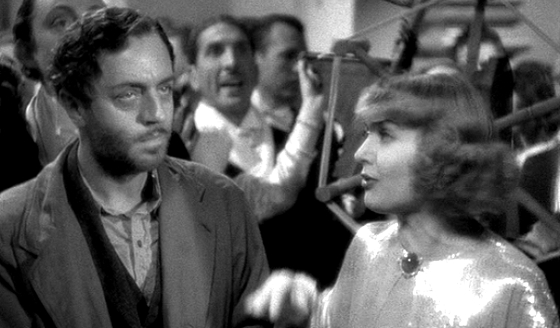 Perhaps people like screwball comedies because the banter in them is a lot like how people really talk — each player makes a lot of self-centered noise, and little if any real communication gets done. The only agenda is Just Plain Fun, a fact that relieves the audience of the responsibility of searching for an authors’ serious theme. It takes a lot of work to make the goings-on in comedy seem spontaneous and effortless, and winners such as Mitchell Leisen’s 1937 Easy Living, require true inspiration and wit. The settings are high-class not because Depression audiences preferred escapism, but because the rich are such an inviting target for satire. Paupers pretend to be rich, penniless boys fall in love with Park Avenue girls, and clever screenwriters find ways around the vast gap between the haves and the have-nots. The most conservative ‘author’s moral’ can provide a feel-good finale.

The Bullock manse is indeed a Fairy Tale world, mainly because the family finances insulate these nitwits from most of the slings and arrows of harsh reality. Everyone on view in My Man Godfrey has evolved and adapted to life in a white Art Deco world. Carole Lombard’s Irene can indulge the flighty caprices that ordinary shop girls never dreamed were possible. She’s not exactly a feminist poster girl, but she’s likely the most endearing ditz in film history, easily eclipsing the screwball great Katharine Hepburn. By comparison, the later comedy ace Barbra Streisand (What’s Up Doc?) seems a pale copy. Lombard is the real pre-feminist deal.

Top honors for unending craziness go to Alice Brady’s unfathomably foolish Angelica. The pampered lady’s main problem is that her husband just won’t accept her version of reality, especially as concerns her lapdog Russian, Carlo. Angelica’s normal conversation would confuse Gracie Allen, and her best lines have a ring of perverse truth: “I wouldn’t say anything about you behind your back that I wouldn’t say in public!”

The clownish Mischa Auer has his finest role as an unemployable pianist. All Carlo wants is the security of three meals a day. He reacts to Alexander’s insults by draping himself from the décor like a character in a Russian tragedy. The unexpected highlight of Auer’s performance is moviedom’s best-ever Ape impersonation, as pointed out by essayist Farran Smith Nehme. Carlo may be a feckless opportunist, but he’s no villain — he’s just grown especially fond of the constant flow of good eats in the Bullock mansion. 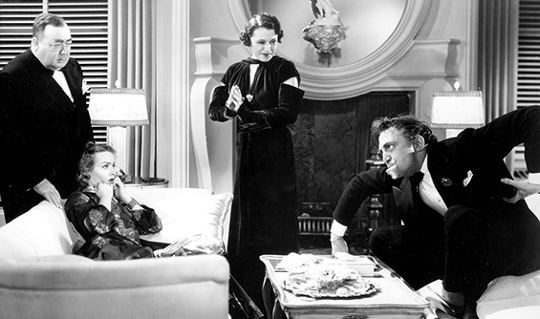 Eugene Pallette’s lovable Alexander moans and groans from the sidelines. He snipes at his wife and mumbles dire threats of murder at his nemesis Carlo. It’s Pallette’s best part for sure — he goes light on the croaking bullfrog act, and when humbled at the finale is thankfully silent and grateful. The most sharply drawn character is Gail Patrick’s scheming sister Cornelia, a moody, spiteful killjoy who makes it her business to see Irene miserable and Godfrey fired. The miracle is that Cornelia isn’t a standard villain either, but simply a hard-bitten cynic with a sadistic edge. Instead of a cardboard antagonist for the virtuous heroine to defeat, Cornelia becomes a fully-realized human along with the rest of the characters. Once again, it’s the standout role for Ms. Patrick. The fine actress didn’t win all that many lastingly memorable parts. She eventually turned to producing television, with great success.

Although Carole Lombard has the showiest, sexiest part, it’s really William Powell’s picture. Unlike his dapper, sassy alcoholic Nick Charles, Godfrey is something of a mystery man with depth, a gentleman with depth. We’re impressed by his patience and reserve, qualities unknown in the Bullock household. Viewers love the way the initially ragged Godfrey ‘cleans up,’ becoming an excellent butler. He deflects insults and defuses antagonisms with effortless grace; he seems to be the antidote for every Bullock’s poison, and a benign catalyst for family harmony. Godfrey accomplishes most of his diplomatic miracles simply by not reacting to the constant provocation around him. All but Cornelia take an instant liking to him. The message seems to be that, despite their petty-bourgeois offenses, the wealthy are just plain nice folks too, waiting for someone to show them some sense. The only resident not given a full measure of forgiveness is Mischa Auer’s Carlo, who is not only a potential gigolo character, but a mooch, a foreigner and a phony artist. Just the same, we hope he’ll be invited back. 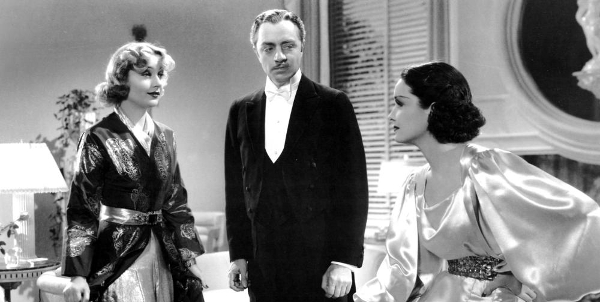 Discard any notion that 1936 was an un-cool year — you’ve just been seeing the wrong movies. Godfrey makes manifestly evident the poverty of most modern situation comedies as well. The snappy delivery and dead-on timing of 1001 great lines is amazing. Enjoyable in smaller roles are Franklin Pangborn and Grady Sutton, and the IMDB says that Jane Wyman is hiding somewhere in the scavenger-hunt crowd. A great admirer of Carole Lombard’s comedic skill, Lucille Ball can be seen to emulate her constantly in her I Love Lucy sitcom.

My Man Godfrey is something of a miracle movie in that by the time it has played out we’re in the mood to welcome its every Fairy Tale story development. The surprises in the last act are both hilarious and heartwarming, even when they’re highly unlikely. Godfrey isn’t a bum who raises himself up, but another spoiled five-percenter who learns his lesson and decides to do something for the Forgotten Men. Instead of turning a pumpkin into a magic carriage, Godfrey transforms a Hooverville dumpsite into a swanky nightclub. The humble servant saves his employer from financial ruin and shows an heiress that not everybody is a greedy swine. The story’s prescription for the Depression is not government handouts, but private investment in jobs. This miracle doesn’t go far beyond Godfrey’s personal story, although he may have a lasting effect on Alexander and Cornelia, not to mention his best friend Tommy Gray (Alan Mowbray). At the fade-out, our beloved Irene is still oblivious to most everything. Believe me, the show works its charm so thoroughly that your reaction will be total approval.

The Criterion Collection’s Blu-ray of My Man Godfrey improves greatly on their early DVD, issued seventeen years and nine hundred special editions ago. One need no longer make excuses for the presentation. The image is better in every respect, more stable and with a texture that reproduces an appropriate, velvety patina. We can now see the fine detail in the special effect of the opening credits, the animated wraparound painting that turn all of the cast and crew names into neon signs on a Hudson river skyline.

The new edition adds to the list of extras. A minute or so of fuzzy blooper outtakes returns, to remind us what old Public Domain copies of the show once looked like. A brief newsreel section dramatizes the ‘forgotten men’ social disaster that was all too real at the height of the Depression. And a full-length radio dramatization with the main stars is included, complete with ads for ‘Lux toilet soap and flakes.’

The new extras are light but filling. A welcome visual essay on the film is by Gary Giddens, and a second piece by Nick Pinkerton examines the and up-and-down career of Gregory La Cava, stressing his working methods and unfortunate career slide. Farran Smith Nehme’s insert essay is a worthy introduction to one of the most expressive directors of the 1930s, and his comedy masterpiece.