The restoration of a newly rediscovered director’s cut of the 1931 The Front Page prompts this two-feature comedy disc — Lewis Milestone’s early talkie plus the sublime Howard Hawks remake, which plays a major gender switch on the main characters of Hecht & MacArthur’s original play. 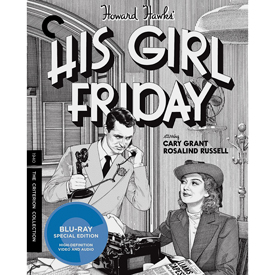 Criterion leaps to take on a real cinematic challenge — presenting Howard Hawks’ 1940 His Girl Friday in a dazzling new presentation, but also comparing and contrasting it with the first version of the Hecht-MacArthur play, 1931’s The Front Page. Added excitement comes with the news that The Front Page has been rescued from blurry oblivion — or complete unavailability — by the discovery of a 35mm file print found in producer Howard Hughes’ archives in Las Vegas. It’s not only in good shape, it’s the original American cut of the film, director Lewis Milestone’s preferred cut, that until 2016 hadn’t been seen since the film was new. 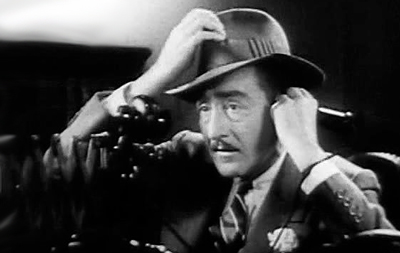 With two excellent encodings and a wealth of informative extras, this release gives us a firsthand look at a great deal of prime Hollywood history. For decades most of Hughes’ personally produced movies were unavailable, and The Front Page is one of the last holdouts. I remember going to Sherman Torgan’s New Beverly theater once in the early 1980s to see Scarface and Hell’s Angels, only for Sherman to show me a legal paper he’d just been handed by a lawyer from the Howard Hughes organization, forbidding the screening.

The smash Broadway play from 1929 introduced the world to wisecracking, cynical and vulgar newsmen, who made heartless remarks at the expense of the people they wrote about for the tabloid papers. Reporter Hildy Johnson (Pat O’Brien in the 1931 film) wants to quit to get married, but his devious boss Walter Burns (Adolphe Menjou) connives to interfere. Helping considerably is the scoop of the century, the escape from death row of anarchist Earl Williams (George E. Stone), right beneath the windows of the pressroom. Hildy not only has Earl hidden away, he has the exclusive story from Molly Malloy (Mae Clarke), a streetwalker who likes him. Hildy also uncovers a scheme by the Mayor and the Police Chief to use Earl’s hanging to win an upcoming election. 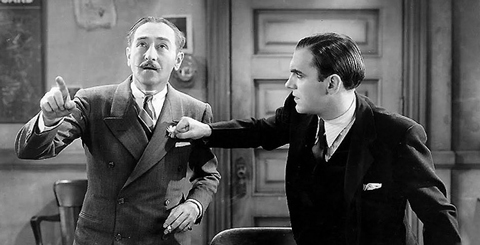 Milestone came to The Front Page straight from his masterpiece All Quiet on the Western Front. Filmed early in 1931, Page isn’t compromised by audio problems — Milestone’s mobile camera sweeps back and forth across rooms while dialogue is spoken. The movie is all about smart talk, smartly paced — the dialogue is plenty snappy. Why aren’t all early talkies this glib, this natural? I guess that’s why Hecht told a colleague, when urging him to come to California to write, that the only competition out in Los Angeles was idiots.

In terms of comedy, the ’31 The Front Page is pre- screwball, but plenty wild. There aren’t so many physical slapstick gags — Hildy doesn’t tackle anybody in the street. Pat O’Brien isn’t at all times a verbal machine gun, and his relationship with his girl (Mary Brian) is sentimental, not buffoonish. Adolph Menjou’s Walter Burns is more of a dirty dog than an inspired trickster, and the business of cutthroat journalism seems more authentic. Since the assembled reporters are competitive wordsmiths, it makes sense that they’d joust with smart remarks, in search of the most devastating insult or bon mot. Walter Catlett is the biggest noise in the police press bullpen, but Edward Everett Horton is terrific as a fussy, hypochondriac colleague. Frank McHugh (playing a reporter named McCue) brightens up the jokes with his perfect deliveries, and his signature high-pitched hah-hah laugh. McHugh clocks in at 13 movie appearances for 1931. 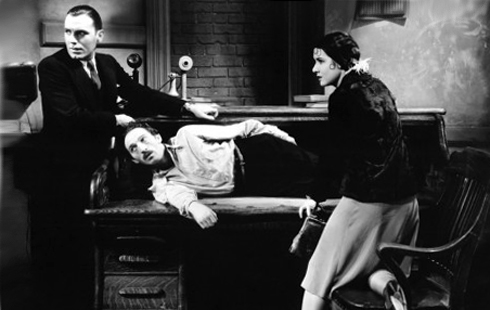 Burns is introduced with forceful trucking shots through the newspaper’s printing plant, reinforcing his status as a powerful man. Louis Wolheim died before he could take the part, but his All Quiet on the Western Front colleague Slim Summerville is the easy-going messenger trying to deliver Earl William’s reprieve. Mae Clarke is fine as Molly: she scored big in three more 1931 releases as well: The Public Enemy, Frankenstein andWaterloo Bridge.

This was the year that Hughes was fighting the censors over his Scarface. The Front Page has a number of compromises, such as the final line, where a typewriter noise covers the offending word in the phrase, ‘son of a bitch.’ If you watch the existing DVD of Hell’s Angels you can hear that same line shouted from an airplane cockpit, along with, ‘Jesus Christ.’ Now, the question is, does that mean that the existing Hell’s Angels DVD is made from a foreign version, like Page was? 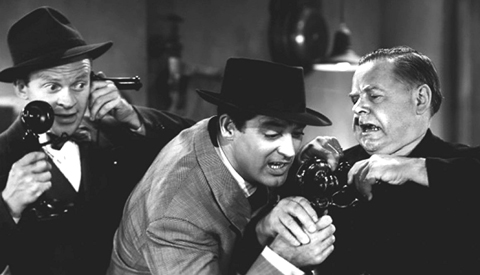 Howard Hawks has always made a good contrast with John Ford in his treatment of he-men under pressure — Ford’s heroes were forever building a nation and posing against the sky, while Hawks professionals seemed to be in the thick of action because they wanted it that way. The Hawks women that came along wanted it that way too — a life of daring and danger, almost for its own sake. In the original The Front Page the assembled newsmen are happy with a line of work that apparently allows them a lot of freedom to run wild… when they write it’s always slamming two fingers on an old typewriter, or dictating over a telephone at a rate nobody could possibly transcribe. This was perfect for Hawks, who according to critic Robin Wood, followed an overarching theme through different genres, dubbed by Wood ‘the lure of irresponsibility.’  Whether a gunslinger, a gangster, a soldier, a scientist or a reporter, a Hawks hero just wants to express the joy of living without all those social rules and laws getting in the way.

Hawks helped launch screwball comedy with Twentieth Century and made its purest statement with the madcap Bringing Up Baby. Hawks would return to screwball mode again, but he never topped His Girl Friday, perhaps the slickest sound farce ever filmed. Cary Grant really works for this one, and he’s matched at every turn by Rosalind Russell, in a career-best appearance. The big difference is of course the gender switch, which makes explicit what seemed to be a professional love relationship between Burns and Johnson: why not just go for it and make Hildy a woman? The switch is effortless, and requires little adjustment. Instead of a sweet love interest for Hildy, we have Ralph Bellamy’s sad sack Bruce Baldwin, an inoffensive nice guy who suffers for no reason except that he isn’t as hip as our manic leading players. Bruce and his mother suffer indignities, but we never worry for them; when Hildy cries over what’s happening to her fiancé — mostly repeated arrests, including one for counterfeiting — she’s really crying for her own confusion. Everybody knows that she belongs with Walter. 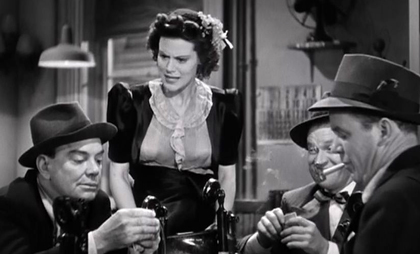 His Girl Friday gets away with torturing poor Ralph Bellamy because he’s such an overly literal boob, and also because he takes it so well — he’d performed the same clueless dope duty in McCarey’s The Awful Truth and Boy Meets Girl.

Hawks and his actors really go for the snappy ensemble work. Grant has his act together and Russell is dynamic and sexy… she (or her stunt double) hikes her skirt up to chase and tackle a man on the street. There are scores of complex, rapid-fire speeches delivered so quickly that awards could have been given out for enunciation above and beyond the call of duty. Helping with the overlapping dialogue are a new gang of smart-mouthed newsmen: Porter Hall, Cliff Edwards, Roscoe Karns, Frank Jenks, and Regis Toomey. Abner Biberman is Burns’ on-call gangster aide, who thinks that ‘albino’ is a foreign nationality; his girlfriend is a useful tool for getting poor Bruce arrested for mashing. 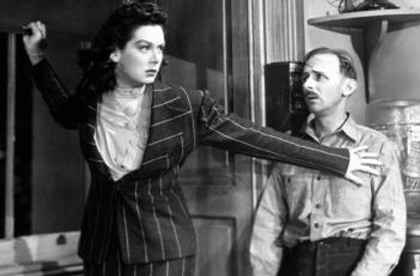 The political angle has changed. John Qualen is an even more woebegone Earl Williams this time around. Instead of a fatalistic anarchist, he’s just an unemployed stoop confused by the Commies preaching in the park. Helen Mack is THE poster child for Depression- era injustice, and she’s even more pitiful than Mae Clarke. When Mack’s Mollie jumps out a window, it takes our breath away.

But that doesn’t break up the crazy-house screwball vibe. The cutting goes mad every time the newsmen rush to their telephones, and the jokes about civic corruption are even more pointed — the trigger-happy deputies busy shooting innocent civilians are all relatives of the sheriff (Gene Lockhart, hilarious).

His Girl Friday is such a high-energy kick that it can generate headaches if one is unprepared. But it’s definitely one of those films that grabs us the moment it comes up on the TV dial. I’ve seen the beginning of the show only two or three times, but the last half probably a dozen. 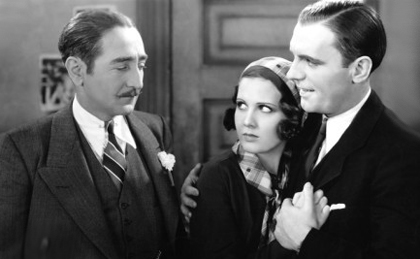 The Criterion Collection’s Blu-ray of His Girl Friday / The Front Page is quite a package. Both movies are handsomely restored, with Friday looking far better than earlier DVD presentations. The Front Page was remastered from a print saved in Howard Hughes’ archives. It has been given a very good scan and clean-up job, with audio taken from old metal playback records. Being from a print, it is not as pristine as the newer version, but even with those caveats it’s an excellent presentation.

Criterion producer Kim Hendrickson has gone the limit for this impressive pair of filmic versions. David Bordwell’s featurette illuminates us about Friday while relating his experiences using it to teach at film school. Audio and video interviews of Howard Hawks by Peter Bogdanovich are more believable this time around: the director doesn’t take credit for everything, just a lot. He does take credit for improvising some dialogue that was already in the first movie. For Front Page we have a fascinating featurette about the restoration, with the Academy experts sorting out the three versions of the film and recovering the audio from a series of large, impractical metal discs.

We see plenty of comparisons between the ‘old’ Front Page, actually an international cut, and the recovered American Lewis Milestone version, which retains plenty of alternate dialogue with more colloquialisms, better reads, etc. The Milestone version has better pacing and better editing, and it’s good to hear the snappier dialogue choices.

One obscene hand gesture that was in the international cut, was judiciously dropped from the Milestone version. So it’s nice for the featurette to retain it for us. 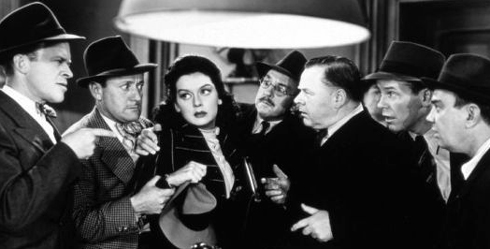 Also up is an excellent bio piece on Ben Hecht, which credits The Front Page with inventing the ‘snappy-cynical’ delivery of dialogue that became such an important part of early talkies. The practice practically became a house style at Warner Bros. The words in The Front Page already come at us fast and dense, leaving Howard Hawks with the challenge of having them spoken even faster — and overlapped, to boot. I don’t think anybody took on that particular challenge again until Billy Wilder turned James Cagney into a hyperdrive motormouth for his comedy One, Two, Three. But nothing tops His Girl Friday.

Farran Smith Nehme and Michael Sragow, insert essays appear on an amusing newspaper-like foldout. Besides listing all the usual info, we can read Bensiger’s awful poetic ode to Earl Williams, and see stills from the original Broadway production of The Front Page.