It’s the great Anthony Mann-James Stewart western that Mann didn’t direct: Stewart goes it alone, over-filling a good western idea with ‘cute’ scenes and conservative messages Mann had no use for. But it’s an exciting picture, and one of co-star Audie Murphy’s best — and it’s the first feature in the splendid oversized format known as Technirama. 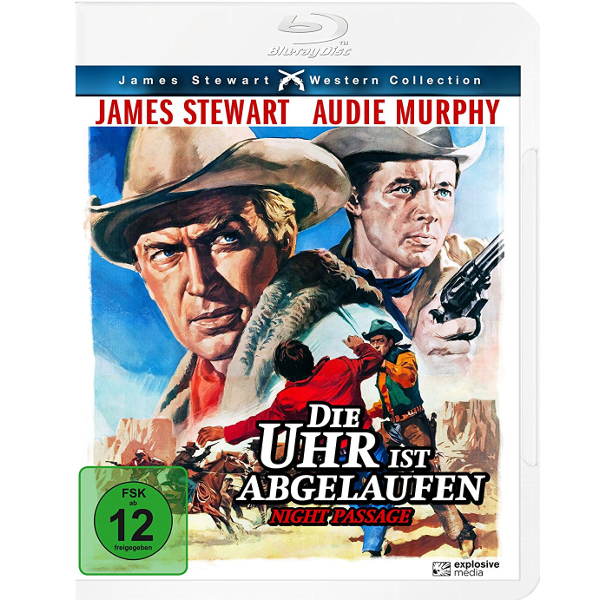 Universal-International didn’t spare the production values for their big-screen western Night Passage. With big stars James Stewart and Audie Murphy riding and fighting in grand Colorado locations, it gets within shootin’ range of classic status. An excellent story builds up to an exciting midpoint, but corny thematics and a tendency to indulge ‘family entertainment’ values takes a toll.

In HD it remains a glorious experience, what with those big-format Technirama vistas in the high country, many of them shot from a moving train. This is the kind of western that Dad loved . . . everyone’s Dad.

The story concerns the breakup of a gang like the infamous Wild Bunch. Disgraced railroad employee Grant McClaine (James Stewart) saves young castoff Joey Adams (Brandon De Wilde) from a beating by a thug named Concho (Robert J. Wilke). They ride into a railroad town, and a complicated adventure. A gang run by Whitey Harbin (Dan Duryea) has already robbed two payrolls. Railroad big shot Ben Kimball (Jay C. Flippen) hires Grant to sneak some money up to the workers, who are threatening to quit. Waitress Charlie Drew (Dianne Foster) and Ben’s wife Verna Kimball (Elaine Stewart) both have an interest in Grant but for different reasons: Verna is bored in her marriage, and Charlie wants to sneak up to Whitey’s hideout, to marry an outlaw named The Utica Kid (Audie Murphy). Grant takes the job, yet the train is robbed anyway. Who back at base camp spilled the beans? Duryea’s gang kidnaps Verna but doesn’t get the payroll money, which ends up in Joey’s shoebox, right in the middle of the thieves. Grant arrives to clean house, but more complications appear: he and The Utica Kid have a common past.

The tendency among Western addicts is to say that Night Passage could have been great if Anthony Mann had directed it. If ‘entertaining’ and ‘polished’ count for anything, the movie has nothing to be ashamed of. After a long list of collaborations, James Stewart and Mann had outgrown each other. The director would move on to his European epics, while the star divided his efforts between acting for top directors like Alfred Hitchcock, and making his own pictures. They tilted toward conservative content, and recruiting for the armed forces.

Mann reportedly passed on the film for script reasons, yet the lively story has a number of similarities with his last Western, the contrastingly pessimistic Man of the West. A criminal gang of misfits is preying on decent society, and the hero finds himself in a no man’s land between respectability and outlawry. Chances are that with its ‘dark’ title, Night Passage was initiated as a more serious story, only to develop in a wholesome direction with the combined participation of Stewart and Audie Murphy. Dark, moody westerns were no longer in vogue — the story has been tweaked to become more suitable for kiddie matinees. 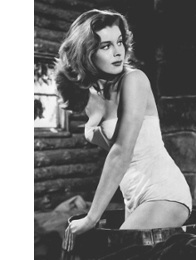 Night Passage displays excellent exterior vistas (the views from the moving train are a pleasure) and a nicely orchestrated spectrum of good guys and bad guys. Veteran villains Robert J. Wilke and Jack Elam get blasted down as they do in most every show they’re in, but we do get to admire Wilke’s skill as he walks atop a very rickety-looking train chugging through a steep mountain pass. The good actor began in the business as a stuntman, and to make a living apparently had to keep it up.

The show feels slightly overpopulated, and presents perhaps a few too many tangled relationships. Everyone Stewart meets is tied in with the crooks in one way or another, and half of them are hiding their true natures. Elaine Stewart (Most Dangerous Man Alive) is cleverly positioned as a kidnap victim who was once engaged to the hero. Her swimsuit pic on the right apparently has nothing to do with this movie, but it’s the holiday season, so . . .

The script works in a number of neat surprises and clever ironies. The railroad deputies that hide in a train car gag is yet another permutation of the same historical robbery that would be revisited in Cat Ballou, Butch Cassidy and the Sundance Kid, and The Wild Bunch. Hugh Beaumont’s railroad detective gets locked in a boxcar just when he thinks he’s going to foil the heist. First-time film director James Neilson previously worked on Alfred Hitchcock’s TV show and later became a Disney house director. In this show he seems to have been strong-armed by his two stars, each of which ends up with superfluous added material to enhance their roles.

Audie Murphy is given an excellent screen entrance. Everyone talks about the Utica Kid for half an hour before he’s finally introduced galloping after a speeding train. He’s then revealed as a tainted hero, who trades menacing smart-talk with Dan Duryea’s greedier outlaw boss. Murphy made a lot of movie klunkers and a number of cheap Westerns, but his pairing with Stewart in this picture shows him trying for something better. As the most-decorated GI of WW2, the actor carried major appeal for American males. They must have reasoned that, if that baby-faced short guy was the USA’s toughest warrior, then everybody has a chance at hero-dom.

What lets Night Passage down is the corn factor. I’m showing my prejudices, but it’s almost as if James Stewart was looking for a cleaner screen image, and took a bar of soap to the morally conflicted story. The two leading women are in very compromised situations, but there’s barely a kiss or an embrace in the picture. The only female with some normal ideas in her head is the gritty muleskinner played by Olive Carey, a grandmother type who openly suggests to Stewart that he drop by when it gets cold in the winter, so they can keep each other warm!

Stewart’s Grant and Murphy’s Utica feel like a stock Borden Chase western hero, split in two. As in the Stewart-Mann films, they exist in a social limbo between virtue and villainy. Stewart plays the defamed McClaine as if he’s expecting to be vindicated any moment; light-hearted and optimistic, he comes off as rather shallow. Murphy’s full-blown baddie has a heart of gold. Utica secretly wants to reform but knows there’s no hope for him. His last-minute noble gesture, changing sides to come to the rescue, completes his character arc. It should be satisfying, but it isn’t directed well enough to achieve maximum impact — we’re expecting just such a twist. The great borrower of classic Western situations Sam Peckinpah may have had this conclusion in mind for his Ride the High Country. In that film, Randolph Scott’s isolation and regret are more deeply felt; when he rides to the rescue, it’s a glorious, heroic atonement.

The politics we see are rather simplistic. As with other Stewart Westerns post-1954, big business and the Army can do no wrong. The railroad may be the only employer in the territory, but the story places too much emphasis on McClaine’s desire to square himself with it. Labor objections are equated with mob rule: the railroad workers are all idiotic complainers, fighting over the late payroll. They’re also henpecked by their wives, namely Ellen Corby. McClaine remains loyal to the railroad, even though his rich boss is a dunderhead cuckold, who hires losers like Hugh Beaumont while accusing good men of thievery. The way McClaine grabs at the offer of a lousy railroad job at the end, isn’t very flattering. Hail to the new boss, same as the old boss.

As soon as a certain relationship is revealed in the story, we’re given a bundle of Author’s Messages: Utica and McClaine do a lot of lame talking about Good and Evil and people’s souls. The complicated network of characters built up earlier in the story is dropped in favor of a conventional wind-up. Stewart becomes the protector of the womenfolk and the kid played by Brandon De Wilde, but several loose ends are left untied.

The only legit gripe is Stewart’s overreaching for cutesy folksy effects. Grant McClaine is constantly singing and playing his accordion, as if Stewart were envious of crossover performers like Burl Ives. He sang once before, briefly, in an MGM musical, but here he keeps pulling out that damn squeezebox and warbling inane ditties like “You Can’t Get Far Without a Railroad.” Did Stewart have a lot of railroad stock? Perhaps he thought ‘being musical’ was a way to extend his repertoire, in line with his reputation from his monster hit with Anthony Mann, The Glenn Miller Story. The show stops dead every time he sings, but I guess it’s better than seeing him play a trombone atop a railroad flatcar. I can imagine audiences cheering the close-up that shows the instrument ablaze in a cabin fire.

In all other respects the music is tops, with an exciting Dimitri Tiomkin score that rings across the landscape. Short at ninety minutes, the film’s interesting elements only come together before the exciting gun battle conclusion at a mine high in the mountains. My remarks above should be taken only as reasons why Night Passage isn’t a classic Western. It is still a very entertaining one, especially for those who prefer their shoot ’em ups on the lighter side. I certainly recommend it as strongly as any of the more critically respected Anthony Mann oaters. That’s Variety- speak: oaters were popular in ozoners.

Explosive Media’s Blu-ray of Night Passage is a German disc licensed from Universal, but is encoded Region-free — it plays fine in domestic Blu-ray players. The transfer is fairly glorious. The sharp image has a great texture. Granularity is minimized by the oversized film format — the show was the first filmed in eight-perf, sideways-running Technirama, which is essentially VistaVision given a slight squeeze. Technirama would pop up on some very good-looking pictures, some of which were effectively enlarged to 70mm: The Vikings, Spartacus, Zulu. The film’s main title graphics, with the names of the stars, interestingly mimic the (rather cool) design of the Technirama logo.

The sound is also very clear, great for fans of Dimitri Tiomkin’s gentle ‘big sky’ themes, which practically define the postwar American western. Oh, and Stewart’s accordion sounds okay too. Explosive’s extras include a trailer in perfect condition and a photo and advertising gallery. Since the German audio option pops up in normal play, one must access the menu to choose the high-quality English track.