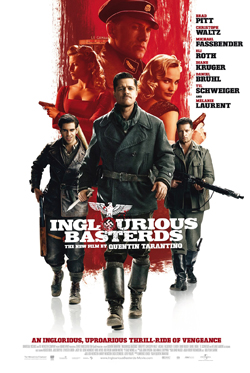 A die-hard believer in the power of film (in particular 35mm), Quentin Tarantino reimagines the end of World War II with the Third Reich trapped inside a burning movie theater. The cast is typically Tarantinian, including turns from Brad Pitt as the Southern-fried squadron leader Aldo Raine, Rod Taylor as Winston Churchill (!) and TFH’s own Eli Roth as “The Bear Jew”. But it’s Christoph Waltz as Hans Landa, a glint-eyed monster known as “The Jew Hunter” who steals the show (and won an Academy Award for his trouble.)