Here’s something odd: the formative feature in Roger Corman’s proto- career. Roger gets credits for Story and Associate Producer, and learned what he needed to learn to produce two movies of his own in the same year. The modest crime thriller sees Richard Conte involved with three women during a chase on dusty desert roads: noir star Joan Bennett and young Wanda Hendrix are a suspicious pair, but special guest Hot Number Mary Beth Hughes all but steals the show. 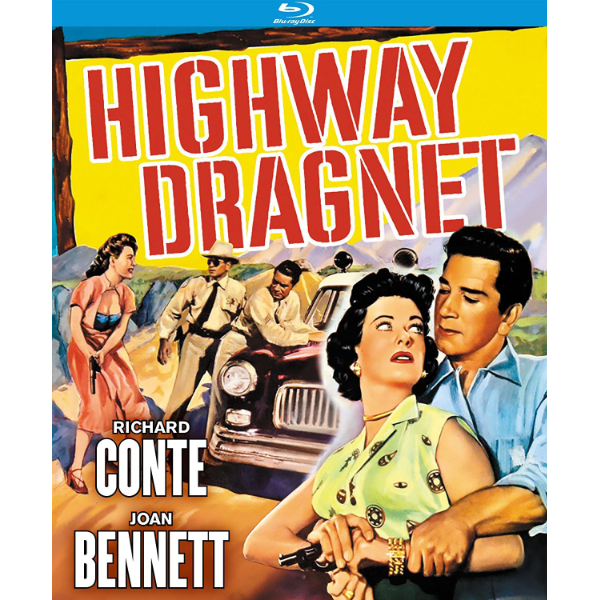 Here’s an interesting oddity — a low-budget ‘program’ picture from Allied Artists that served as a starting point for future producer-director-distributor Roger Corman, before he filmed his first no-budget homemade production, 1954’s Monster from the Ocean Floor. Schooled as an engineer, Corman waited forever to get a mailroom job at 20th-Fox, moved up to minor script work, and learned an unpleasant lesson when a supervisor took credit for his changes to a screenplay. Corman then sold a story to William F. Broidy, the brother of AA’s head honcho Samuel Broidy. Corman negotiated an unpaid job for himself on the show as an additional co-producer, as a way of learning the production end of the industry. He had good teachers. Director Nathan Juran was a former art director, trying to branch out from his directing contract at Universal. The film’s assistant director was the highly experienced William Beaudine Jr.. The personable Corman was undoubtedly lining up contacts for his own self-financed production. The movie’s title change says something about Roger Corman right up front. He had chosen the rather artsy title The House in the Sea. Allied Artists changed that to the eminently commercial and rather sneaky Highway Dragnet. Moviegoers would surely associate the title with Jack Webb’s successful TV show Dragnet.

The story is simple and its suspense twist is utterly transparent. Ex-Marine Jim Henry (Richard Conte) meets the shapely, inebriated Terry Smith (Mary Beth Hughes) in a bar, gets on well with her for a few seconds and then draws unwanted attention when she slaps him. The next morning while hitchhiking to California, the cops pick him up for Terry’s murder. Detective Joe White Eagle (Reed Hadley) has circumstantial evidence against Jim, who decides he’s being railroaded and busts free. He soon hooks up with a pair of women who also seem in a hurry. Wealthy socialite and commercial photographer Mrs. Cummings (Joan Bennett) is angry that their car has broken down, and her assistant Susan Willis (Wanda Hendrix) is eager to see the handsome Jim arrive to help. Only when they reach the Apple Valley Inn, where Cummings is set to do some publicity work, do the women realize that the Vegas police wants Jim as the ‘Strap Killer.’ Jim has no choice but to kidnap them and try to make a cross-desert run to reach his house at the Salton Sea. He believes that there he can clear his name.

Highway Dragnet may be a cheapie, but it has a very good cast of mid-range actors, two of whom had been big stars just a few years before. Loose from his Fox contract, Richard Conte wasn’t scoring roles in big pictures, and neither was young actress Wanda Hendrix, who had gained very good publicity in Ride the Pink Horse. Both Hendrix and star Joan Bennett had been harmed by Hollywood scandals. Bad publicity fallout from Hendrix’s unhappy, violent marriage to Audie Murphy had taken its toll. Bennett was absent from screens large and small for at least a year after her husband Walter Wanger shot her agent Jennings Lang in a fit of jealous rage, and did a stretch in prison. Allied Artists was helping Wanger rehabilitate his career, in exchange for using his famous name as a producer on a couple of features. When he was back on his feet, Wanger soon began producing through AA.

The story is nothing special at all. It flubs numerous details — just what is that bloody clothing doing in Jim’s suitcase? — but it does have a novel gimmick. Young Roger Corman said he was intrigued by the massive flooding he saw at the Salton Sea, where the rising sea level had drowned entire neighborhoods in three feet of water. The movie doesn’t really exploit the situation, but the idea of a conclusion in a watery ghost town is probably what sold the script. This shows that Corman was thinking about commercial values from the very beginning. . . one’s film had to have something to distinguish it from the competition.

Nathan Juran directs much of Highway Dragnet on location in the desert of Southern California, lending the tiny production a feeling of reality, ’50s style: the cinematography is basic but things look hot and windy. The wind was apparently unplanned, as it blows the ladies’ hair around when they’re supposed to be looking relaxed and glamorous. The unambitious show uses stock footage to depict downtown Vegas, of which we see only the interior of a small bar. One cop car we see has a cardboard sign on its door, that reads “LV POLICE.”

Highway Dragnet hasn’t much of a noir bent, as Jim Henry has no particular psychological problem and is simply trying to extricate himself from a sticky situation. Nor is anything out of kilter with law enforcement — the cops are all on the up & up. The suspense comes about because the script withholds information. We’re pretty sure that Jim had nothing to do with the killing, but it’s obvious that Mrs. Cummings and Susan are hiding something. Sure enough, people are soon pointing guns at each other for unoriginal reasons. While serviceable, the picture lacks the tension of other desert-set road noir thrillers, like Detour, The Hitch-Hiker and Jeopardy. Anybody judging the film by its first five minutes would think it a potential classic. Richard Conte and Mary Beth Hughes’ meeting in a Vegas bar sparks real excitement. Hughes’ Terry is a wholly convincing looker on the make, just drunk enough to be frisky. She’s totally convincing when she suddenly takes offense at the wrong offhand remark. Mary Beth Hughes in fact upstages both of the film’s leading ladies. She appeared in an impressive femme fatale role in the same year’s Loophole, where she corrupts a bank teller and ends up holding a gun on the hero in the same Malibu beach house that would be seen in the timeless Kiss Me Deadly. A genuine filmic Hot Number, Ms. Hughes film career didn’t proceed to bigger roles. If she’s particularly good in something else, I’d very much like to see it. (note) The photo above is unfortunately a pub shot not in the context of Hughes’ one scene in the film, where she sports a genuinely wicked smile. But the photo does suggest that Jim Henry may have indeed spent part of the night with Terry Smith.

The dynamic between Joan Bennett and Wanda Hendrix isn’t as exciting. Bennett and Conte are the same age, but Hendrix is the one paired with Conte, despite being eighteen years his junior. Director Juran’s visuals also favor Hendrix over Bennett, which seems wrong until we realize that Mrs. Cummings is a woman of mystery, with ulterior motives. Just the same, the movie does little or nothing for Ms. Bennett. She had already begun playing ‘mother’ roles five years before, in The Reckless Moment and Father of the Bride; just one year later she’d be playing the mean-spirited wife in Douglas Sirk’s over-analyzed There’s Always Tomorrow, losing out to the sympathetic Barbara Stanwyck. Roger Corman’s idea of concluding the movie in the eerie half-submerged neighborhood at the Salton Sea could have yielded a classic sequence. If we knew more about Jim Henry’s post-war aspirations, the surreal location could have been made to express anything one wanted to suggest about America. A fistful of good noirs use the suburbs, and new housing tracts, to make sly statements about the consumer mandate and the American dream: Edmond O’Brien, Lee Marvin and Glenn Ford all meet their fates on choice pieces of real estate.

Nope, Highway Dragnet treats the scene with no sense of mystery whatsoever, and shows us only one soggy house. The scene is efficiently blocked, though, as is an earlier scene in a diner that features Hollywood veteran and perennial floozy Iris Adrian as a loudmouthed waitress. Roger Corman would immediately use Ms. Adrian as a waitress in his own The Fast and the Furious. Both the diner scene and the concluding scene at the Salton Sea have serious continuity flubs. In the diner, a pair of highway patrolmen sitting at the counter disappear in one angle, and reappear in the next.

When Reed Hadley’s sober cop steps into the kitchenette of Jim’s submerged house, a crude matte blocks out almost a fifth of the screen, clearly to hide something that wasn’t supposed to be in the frame. Was it a microphone? A crew member? Or maybe the prop gun that’s supposed to be on the other side of the room? Observer Corman surely paid close attention, and learned that the best way to avoid continuity problems was to eliminate extraneous elements from the scene. The characters in Corman’s early movies are seldom shown smoking, drinking or eating. The KL Studio Classics Blu-ray of Highway Dragnet is a sharp and smart encoding (said to be a 4K scan) of this minor but historically notable Allied Artists picture, that was surely relegated to second feature use before being sold to television. The correct-looking widescreen image is perfect, allowing us to check out every aspect of the production. It’s particularly interesting watching the cast pretend that things are balmy and calm at the Apple Valley Inn, when the wind looks to be blowing at 20 mph.

Kino provides no extras save for a stack of trailers. Doubling back on a policy they started several years ago, no English subtitles are provided. Kino’s package copy calls the film a noir classic and misspells the original production company’s name as ‘Allied Artist.’ I guess they can be forgiven, for Allied Artists did that at least once on their own title sequences.