This is one of Spencer Tracy and Elizabeth Taylor’s best, written and directed by the classy MGM team of director Vincente Minnelli and writers Frances Goodrich & Albert Hackett. It inspired a decade’s worth of TV family sitcoms and set the benchmark for weddings for generations. Great fun and solid sentiment without mugging or exaggeration. 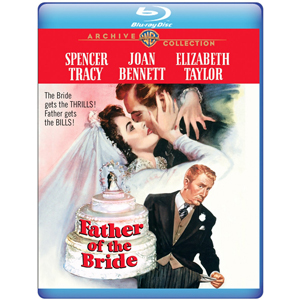 There’s almost no point in reviewing Father of the Bride, as one doesn’t need insights, background info or a sense of humor to appreciate what is practically a perfect movie of its kind. Customs have changed in 66 years yet people are still throwing expensive weddings for their children, if they can afford it or even if they can’t. The benchmark dream wedding for (what remains of) the middle class is still this warm and funny super sitcom from MGM. Vincente Minnelli signed the picture, but with this cast and this winning screenplay any MGM director could have made it just as good. Father of the Bride doesn’t date because it’s smart and sentimental, and free of the phony family glop that the studio poured into its ’40s movies for ‘the little people out there.’ 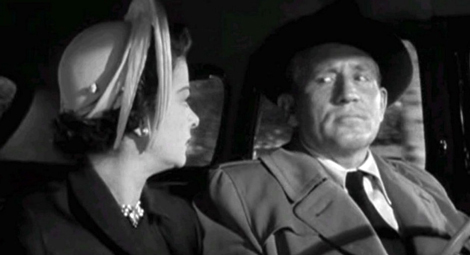 Producer Pandro S. Berman must have left the team of Albert Hackett and Frances Goodrich alone, because their screenplay is perfect. The writers of It’s a Wonderful Life herein provide the template for the family sitcoms of the 1950s. Of course it’s idyllic: the Banks family enjoys peace and prosperity, even if the head of the family worries about being fleeced. The main joke is watching Spencer Tracy gripe and sweat and suffer and wilt as the costs mount for this ‘little wedding.’ With the rise of a healthy middle class in the 1950s, average folk could afford to splurge at least a little on the big day. A lot of the movie is spent in shock at the price tags for all the things that go into a wedding… yet it’s in no way a social statement, or a criticism of so-called bourgeois values. As George Bailey might say, us bourgeois folk looking out for ourselves in a normal selfish way, do our share of the living and working and dying in the world. Spencer Tracy and Elizabeth Taylor are so good in the movie that their entire star-persona package of associations doesn’t matter. Well, almost. With this movie and the next year’s A Place in the Sun, Liz Taylor became a real adult movie goddess, a presence so powerful that most of America fell in love with her. 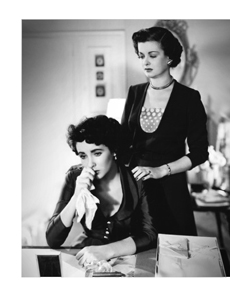 An ‘average wedding’ is seen from the viewpoint of a reluctant father of the bride. Lawyer Stanley Banks (Spencer Tracy) is unprepared when his gorgeous daughter Kay (Elizabeth Taylor) lets the news drop that she’s marrying young businessman Buckley Dunstan (Don Taylor). Banks’ possessive-protective instincts come out, and he’s upset enough to throw mini-tantrums and embarrass himself before his prospective son-in-law and their parents. Ellie Banks (Joan Bennett) tries to keep her emotional spouse on an even keel. The purchases, rentals, and other arrangements for a large church event and a reception for a crowd far too big for their home drive Stanley to exasperation: he thought he was going to be paying for ‘a little wedding’ but everything gets out of hand. He weathers the indignities and general chaos as well as can be expected, missing the engagement party because he has to play bartender, and suffering through a wedding rehearsal that rehearses nothing. Helpless to change the course of events, Stanley believes that he’s a victim and the only reasonable person in the family. As the big day nears, he’s surprised to find out how emotional he is becoming … he has a nightmare, and he feels pangs of pain at the thought of his daughter leaving.

I think this is my favorite Spencer Tracy film. He’s on camera constantly, playing a guy who elsewhere might be an ineffective butt of the jokes. Father of the Bride is technically a farce that upends the homily, ‘father knows best.’ Yet Tracy doesn’t mug or exaggerate. Hackett and Goodrich give him plenty of opportunity to make like Red Skelton, but Tracy underplays everything.  Voiceover narration underlines Stanley’s reactions. Even after he makes a fool of himself, his audible thoughts show that his heart is in the right place, and that he’s no more in control of his emotions than anybody else.

The writers aren’t afraid to give Taylor’s Kay a slightly bratty quality; she’s twisted her father around her finger and sees nothing wrong with patronizing him, even though she’s usually in the right. The gem in the movie is Joan Bennett, who changed from femme fatales to mother roles exactly one film earlier in The Reckless Moment, a noir about a mother covering up a daughter’s crime. Ellie Banks at first seems happy to have the wedding just for the thrill of spending money. But as Bennett demonstrates, Ellie knows her husband well and tries to be a calming influence. And she knows that Dad wants the best for his baby girl anyway. 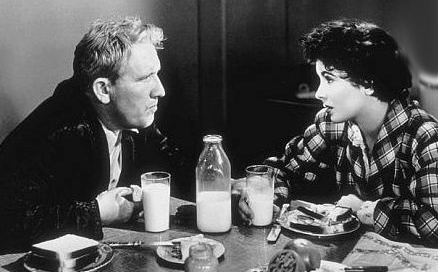 Father of the Bride is distinguished from the average MGM ‘family values’ film in that there are no fatuous speeches promoting said values, especially from unlikely sources. Unlike Andy Hardy, teenaged sons are often the last to voice such sentiments. The heartwarming material, as when father and daughter meet in the kitchen in the middle of the night, to finally have a real talk, are natural and unforced. When Stanley’s imagination runs amuck worrying that Buckley might be anybody — the ‘put a bullet in the back of her neck’ speech — it’s hilarious but also indicative of the noir influence: for several years mainstream movies had been reveling in psychotic, sadistic murder, with old ladies being pushed down stairs, etc..  Today’s noir fans will have fun comparing Joan Bennett’s hausfrau with the unhappy noir dames she did so well, in Scarlet Street and Hollow Triumph. Rusty Tamblyn was a borderline unknown then, but made his mark in the opening of the classic noir Gun Crazy. When Stanley worries that Buckley might have ‘another wife stashed someplace,’ fans of noir will remember that future director Don Taylor already has a devoted wife, back in The Naked City.

Fans of noir cinematography won’t see John Alton doing much more than standard high-key MGM lighting until Stanley’s dream sequence, an expressionist nightmare that proves how closely related are comedy and horror. The effect only has to be sustained for one scene, but Stanley’s dream of being bogged down in quicksand in the church, with the wedding guests staring at him like ghouls and Kay screaming in shock, is one of the funniest scenes of its kind. Because we’ve all had dreams of social horror, with our clothes falling apart in public, the scene has an unexpected power. It also counteracts any urge the film has in the direction of cloying sentimentality. This is hip, especially so for Minnelli. He was apparently so impressed that Alton got the job to do the studio’s biggest picture of the year,  An American in Paris. 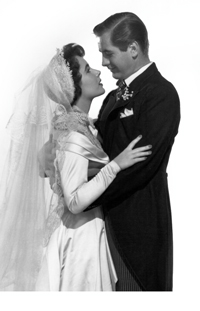 Father of the Bride earns every compliment it ever received; even with the Big Fat Greek movies it’s still the best show about a wedding. Viewers adore Tracy’s great performance, and Elizabeth Taylor is still the ideal virgin bride, standing proud before the mirror in her wedding dress waiting for Daddy to give her away. That’s usually not how it works today, but that’s how some of us imagine it’s supposed to be.

The Warner Archive Collection  Blu-ray of Father of the Bride is a clean and spotless HD scan of one of MGM’s most popular pictures. The robust images haven’t been cleansed of natural film grain; look closely and you can see some of Taylor’s facial beauty spots sticking through the makeup. And we can finally see what that perfume atomizer she uses in the first scene is supposed to be … it’s designed to look like a flit gun, for spraying roses, or roaches. She gives Daddy a spritz, and then tucks it back in her pocket. Hackett and Goodrich know what they’re doing: Kay has Daddy in her pocket too.

MGM gives us two short newsreel pieces. The first in an official glimpse of Elizabeth Taylor’s real wedding to Conrad Hilton Jr..  A second MGM newsreel outtake shows Taylor, Tracy and Bennett being received by President Truman, presumably after a White House screening of the film. The uncut footage has a uniformed soldier with Truman meeting the stars as well. It might be the President’s son.