Dirty cops were a movie vogue in 1954, and Edmond O’Brien scores as a real dastard in this overachieving United Artists thriller. Dreamboat starlet Marla English is the reason O’Brien’s detective kills for cash, and then keeps killing to stay ahead of his colleagues. And all to buy a crummy house in the suburbs — this man needs career counseling. 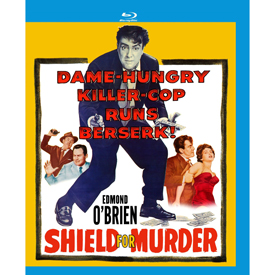 Here’s the kind of ’50s movie we love, an ambitious, modest crime picture that for its time had an edge. In the 1950s our country was as blind to the true extent of police corruption as it was to organized crime. Movies about bad cops adhered to the ‘bad apple’ concept: it’s only crooked individuals that we need to watch out for, never the institutions around them. Thanks to films noir, crooked cops were no longer a film rarity, even though the Production Code made movies like The Asphalt Jungle insert compensatory scenes paying lip service to the status quo: an imperfect police force is better than none.

United Artists in the 1950s helped star talent make the jump to independent production, with the prime success stories being Burt Lancaster and Kirk Douglas. But the distribution company also funded proven producers capable of putting out smaller bread ‘n’ butter movies that could prosper if costs were kept down. Edward Small, Victor Saville, Levy-Gardner-Laven. Aubrey Schenck and Howard C. Koch produced as a team, and for 1954’s Shield for Murder Koch co-directed, sharing credit with the film’s star, Edmond O’Brien. The show is a smart production all the way, a modestly budgeted ‘B’ with ‘A’ ambitions. O’Brien was an industry go-getter trying to channel his considerable talent in new directions. His leading man days were fading but he was in demand for parts in major films like The Barefoot Contessa. The producers took care with their story too. Writers Richard Alan Simmons and John C. Higgins had solid crime movie credits. Author William P. McGivern wrote the novel behind Fritz Lang’s The Big Heat as well as Rogue Cop and Odds Against Tomorrow. All of McGivern’s stories involve crooked policemen or police corruption. 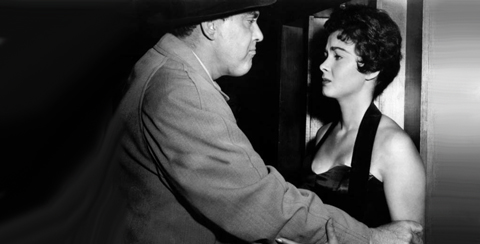 Shield for Murder doesn’t tiptoe around its subject matter. Dirty cop Detective Lt. Barney Nolan (O’Brien) kills a hoodlum in an alley to steal $25,000 of mob money. His precinct boss Captain Gunnarson (Emile Meyer) accepts Barney’s version of events and the Asst. D.A. (William Schallert) takes the shooting as an open and shut case. Crime reporter Cabot (Herbert Butterfield) has his doubts, and lectures the squad room about the abuse of police power. Barney manages to placate mob boss Packy Reed (Hugh Sanders), but two hoods continue to shadow him. Barney’s plan for the money was to buy a new house and escape the rat race with his girlfriend, nightclub cashier Patty Winters (Marla English). But a problem surfaces in the elderly deaf mute Ernst Sternmueller (David Hughes), a witness to the shooting. Barney realizes that his only way forward is to kill the old man before he can tell all to Det. Mark Brewster (John Agar), Barney’s closest friend.

Once again one of society’s Good Guys takes a bite of the forbidden apple and tries to buck the system. Shield for Murder posits an logical but twisted course of action for a weary defender of the law who wants out. Barney long ago gave up trying to do anything about the crooks he can’t touch. The fat cat Packy Reed makes the big money, and all Barney wants is his share. Barney’s vision of The American Dream is just the middle-class ideal, the desirable Patty Winters and a modest tract home. He’s picked it out – it sits partway up a hill in a new Los Angeles development, just finished and already furnished. Then the unexpected witness shows up and everything begins to unravel; Barney loses control one step at a time. He beats a mob thug (Claude Akins) half to death in front of witnesses. When his pal Mark Brewster figures out the truth, Barney has to use a lot of his money to arrange a getaway. More mob trouble leads to a shoot-out in a high school gym. 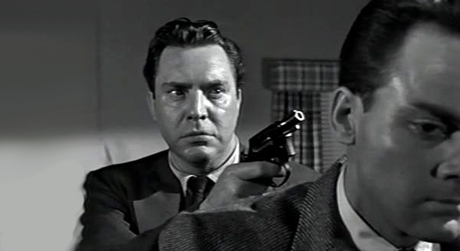 The idea may have been for the star O’Brien to coach actors John Agar and Marla English to better performances. Agar is slightly more natural than usual, but still not very good. The gorgeous Ms. English remains sweet and inexpressive. After several unbilled bits, the woman often compared to Elizabeth Taylor was given “introducing” billing on the Shield for Murder billing block. Her best-known role would be as The She-Creature two years later, after which she dropped out to get married. Co-director O’Brien also allows Emile Meyer to go over the top in a scene or two. But the young Carolyn Jones is a standout as a blonde bargirl, more or less expanding on her small part as a human ashtray in the previous year’s The Big Heat. Edmond O’Brien is occasionally a little to hyper, but he’s excellent at showing stress as the trap closes around the overreaching Barney Nolan.

Other United Artists budget crime pictures seem a little tight with the outdoors action — Vice Squad, Witness to Murder, Without Warning — but O’Brien and Koch’s camera luxuriates in night shoots on the Los Angeles streets. This is one of those Blu-rays that Los Angelenos will want to freeze frame, to try to read the street signs. There is also little downtime wasted in sidebar plot detours. The gunfight in the school gym, next to an Olympic swimming pool, is an action highlight. 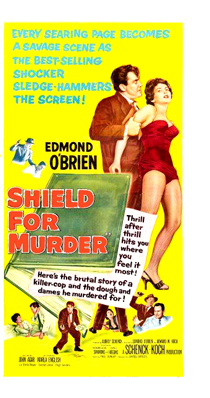 The show has one enduring sequence. With the force closing in, Barney rushes back to the unfinished house he plans to buy, to recover the loot he’s buried next to its foundation. Anybody who lived in Southern California in the ’50s and ’60s was aware of the massive suburban sprawl underway, a building boom that went on for decades. In 1953 the La Puente hills were so rural they barely served by roads; the movie The War of the Worlds considered it a good place to use a nuclear bomb against invading Martians. By 1975 the unending suburbs had spread from Los Angeles, almost all the way to Pomona. Barney dashes through a new housing development on terraced plots, boxy little houses separated from each other by only a few feet of dirt. There’s no landscaping yet. Even in 1954 $25,000 wasn’t that much money, so Barney Nolan has sold himself pretty cheaply.

Two more latter-day crime pictures would end with ominous metaphors about the oblivion of The American Dream. In 1964’s remake of The Killers the cash Lee Marvin kills for only buys him a patch of green lawn in a choice Hollywood Hills neighborhood. The L.A.P.D. puts Marvin out of his misery, and then closes in on another crooked detective in the aptly titled 1965 thriller The Money Trap. The final scene in that movie is priceless: his dreams smashed, crooked cop Glenn Ford sits by his designer swimming pool and waits to be arrested.

Considering how well things worked out for Los Angeles police officers, Edmond O’Brien’s Barney Nolan seems especially foolish. If Barney had stuck it out for a couple of years, the new deal for the L.A.P.D. would have been much better than a measly 25 grand. By 1958 he’d have his twenty years in. After a retirement beer bash he’d be out on the road pulling a shiny new boat to the Colorado River, like all the other hardworking cops and firemen enjoying their generous pensions. Policemen also had little trouble getting house loans. The joke was that an L.A.P.D. cop might go bad, but none of them could be bribed.

O’Brien directed one more feature, took more TV work and settled into character parts for Jack Webb, Frank Tashlin, John Ford, John Frankenheimer and finally Sam Peckinpah in The Wild Bunch, where he was almost unrecognizable. Howard W. Koch slowed down as a director but became a busy producer, working with Frank Sinatra for several years. He eventually co-produced Airplane! 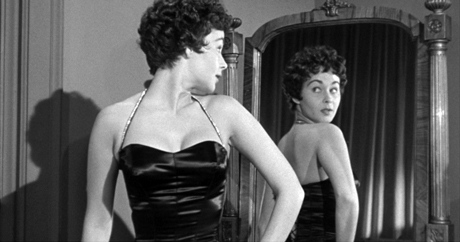 The KL Studio Classics Blu-ray of Shield for Murder is a good-looking B&W scan, framed at a confirmed-as-correct 1:75 aspect ratio. The picture is sharp and detailed, and the sound is in fine shape.

The package art duplicates the film’s original no-class sell: “Dame-Hungry Killer-Cop Runs Berserk! The first scene also contains one of the more frequently noticed camera flubs in film noir — a really big boom shadow on a nighttime alley wall. Kino’s presentation comes with trailers for this movie, Hidden Fear and He Ran All the Way.