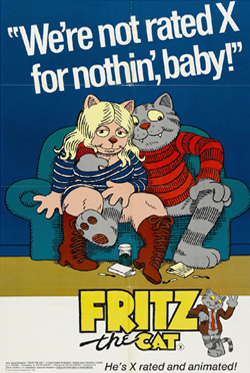 The great cartoonist/provocateur Robert Crumb disowned this 1972 film based on his comic strip about the low-down adventures of a randy tom-cat. Clearly a labor of love for director Ralph Bakshi, he spent years finding backing and several more years producing it. With the help of long-time Disney animator Edwin Aardal (Fantasia), Bakshi finds a reasonable approximation of Crumb’s densely populated visual style but he doesn’t capture the passive-aggressive humor of the misanthropic artist’s shaggy-dog storytelling. The movie flaunted its adults only rating (“We’re not rated X for nothin’, baby!”), not only to cement its counter-culture cred but to distance itself from more juvenile animation fare. Producer Steve Krantz began his career in animation with the bottom-of-the-barrel syndicated shows, The Mighty Thor and Spider-Man in 1966-67. NSFW!