Guest reviewer Lee Broughton returns with an assessment of Sammo Hung’s groundbreaking Hong Kong hit wherein comedy, horror and martial arts elements are brought together in a wholly successful way. This show has it all: kung fu action, duelling mystics, hopping vampires, hungry zombies, haunted mirrors and a sympathetic everyman whose danger-fraught narrative trajectory is littered with moments that are genuinely funny. Excellent production values complete this near perfect picture. 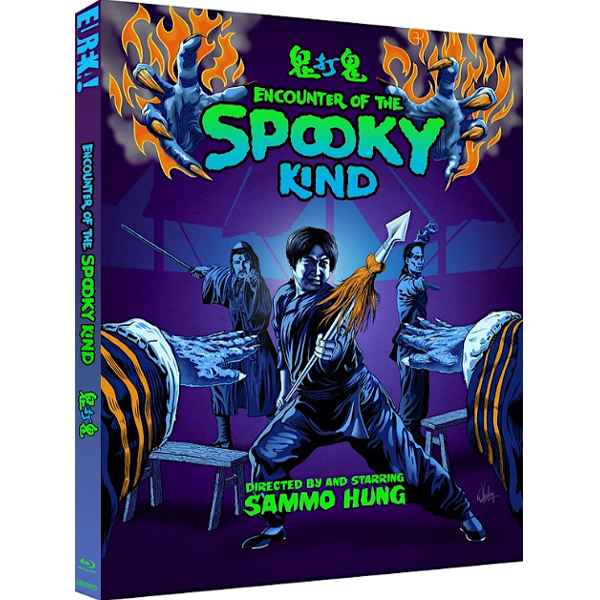 “Fat Guts” Cheung (Sammo Hung) is a rickshaw driver in rural China. The “Fat Guts” moniker came about because he’s both well-built and well-known for bravely taking on daunting challenges. However, Cheung’s reputation for being courageous is built on somewhat shaky foundations as he carries a secret fear of the supernatural. Needless to say, his pride results in him taking on a spooky challenge set by his co-workers and the fake supernatural phenomena that his colleagues cook up really gives him a fright before he sees through it. Unfortunately for Cheung, all too real supernatural phenomena of a wholly malevolent nature is about to be directed at him.

One of Cheung’s rich clients, Master Tam (Huang Ha), is having an affair with his flighty wife (Suet-Mei Leung). When Cheung almost catches them together Master Tam elects to employ an unscrupulous Maoshan sorcerer, Chin Hoi (Lung Chan), to dispose of him using black magic. Cheung’s only hope comes in the form of Tsui (Fat Chung), a junior Maoshan sorcerer who is appalled by the actions of his more senior associate. But will Tsui’s knowledge of the mystic arts be enough to save Cheung?

Horror and comedy rarely make for truly comfortable bedfellows in my experience. But what happens if you throw some kung fu fighting into the mix too? Ricky Lau’s Mr. Vampire (1985) did just that and the addition of martial arts action serves to help that film a great deal. However, the brand of broad comedy peddled by Lau in Mr. Vampire is very hit and miss and the film is at its weakest when it presents comedic scenes that have no horror or kung fu elements to enliven them.

Sammo Hung’s earlier genre mash-up Encounter of the Spooky Kind incorporates horror, comedy and kung fu elements too but Hung — who also co-wrote the show — is able to present a much more nuanced, cohesive and pleasing mix of the three elements in his film. Encounter of the Spooky Kind’s comedic aspects aren’t as broad as Mr. Vampire’s and they are enhanced by Hung in his role as the show’s lead character.

The supernatural phenomena phobic Cheung receives a plethora of effectively generated scares in Encounter of the Spooky Kind but Hung is able to communicate the rickshaw driver’s fear without resorting to the kind of wild facial mugging and over-the-top physical gesticulations that tended to grate a bit in Mr. Vampire. Hung also successfully performs the odd bit of well-realised physical slapstick comedy and appears front and centre in a number of well-constructed scenes that feature creative sight gags.

Of course Hung is best known to film fans for his remarkable martial arts skills and he gets to showcase these in a number of pleasingly choreographed sequences here. In one such extended sequence — which possesses a “petrified human frantically fending off relentless attacks by a supernatural coffin dweller within a confined space” dynamic that brings to mind Konstantin Ershov and Georgiy Kropachyov’s Russian rural horror show Viy (1967) — Cheung is duped into spending two consecutive nights in the Ma family’s Ancestral Hall. Each night after darkness falls a hopping vampire (Biao Yuen) of the variety that would subsequently be showcased more prominently in Mr. Vampire bursts out of its coffin and troubles Cheung.

Although Tsui has offered him useful mystical council, Cheung largely survives these super-intense supernatural encounters by virtue of his impressive agility and his intuitive kung fu moves. In addition to tussles with other supernatural beings, Cheung also comes into conflict with a corrupt police inspector (Ching-Ying Lam) who has been bribed by Master Tam to dispose of Cheung in the event of Chin Hoi’s magical strategies failing in that regard. This narrative development prompts kung fu fights with the inspector’s men and a well-staged jail break too.

All of this might make Encounter of the Spooky Kind sound like a one-man show but it doesn’t play like that at all. Although he is the show’s director, co-writer and star, Hung doesn’t dominate proceedings and there are several other well-drawn and meaty character roles to enjoy here. And these characters all find themselves at the centre of some involving conflicts that have interesting moral dimensions and power dynamics at their core.

The most dramatic struggle is perhaps the one between the two Maoshan sorcerers, whose frenetic and flamboyantly choreographed magical rites and furiously chanted incantations bring to mind the duelling mystics encountered in King Hu’s preternatural wuxia film Legend of the Mountain (1979). The evil senior sorcerer Chin Hoi and the benevolent junior sorcerer Tsui both look the part and they are able to draw upon martial arts skills too.

Elsewhere we have story threads that involve the (mostly) moral Cheung in conflict with his wholly immoral wife; Cheung the poor and powerless little man versus Master Tam the privileged and powerful town elder-cum-prospective politician; and the (mostly) honest Cheung versus the corrupt and dishonest police inspector. Hung imbues Cheung with just the right amount of pathos and everyman-like qualities to ensure that we’re firmly rooting for him in every fight on every front.

Indeed, it’s Hung’s ability to gain our sympathy and lead us willingly on Cheung’s roller coaster ride of sometimes startling, sometimes funny but always danger-fraught supernatural encounters that makes Encounter of the Spooky Kind such an enthralling and exhilarating film.

The quality of the acting on display here is perfect for this kind of period comedy-horror show but Encounter of the Spooky Kind also boasts some pleasing production values too. Convincing costumes and sets, creative camerawork, atmospheric lighting and suitably spooky music all compliment Hung’s sure-handed direction here. The make-up, special effects and stunt work that are employed to bring the show’s supernatural elements and scenarios to life are particularly noteworthy.

As such, it’s easy to appreciate just why Encounter of the Spooky Kind became a surprise local hit and was subsequently responsible for spawning a whole new wave of Hong Kong films that fused horror and comedy with kung fu action.

Eureka Entertainment’s Region B Blu-ray of Encounter of the Spooky Kind sports excellent picture quality (the images used for illustrative purposes here are taken from older sources and do not reflect the excellent picture quality of the new Blu-ray). The original Cantonese language audio track (supported by optional English language subtitles) that I used to watch the film was of a near enough excellent quality too. The first 2000 copies of this release come in a slipcase and include a poster and a 24 page booklet featuring writing by James Oliver.