The artistic and uncompromising director Lewis Milestone was always respected. He produced some great pictures despite strained studio relationships: the silent Two Arabian Knights and The Racket, his masterpiece All Quiet on the Western Front, The Front Page, Rain, Of Mice and Men, The Strange Love of Martha Ivers. He all but invented the sound-era anti-war film, and made several more combat pictures with different agendas. Made during wartime, Edge of Darkness exaggerates the Norwegian resistance to an apocalyptic level, The North Star is a valentine to the Soviet partisan front, and The Purple Heart is a gut-wrenching ‘hate Japs’ morale piece. The later Pork Chop Hill celebrates the frustrating nature of the Korean War conflict.

Milestone’s second-best war movie is 1945’s A Walk in the Sun, a show with an original and unexpected approach. Filmed late in 1944, the show is less realistic than poetic. The mission isn’t particularly realistic, and many technical details are inaccurate — or better, irrelevant. The real subject is the ‘spirit’ of the American fighting man, as expressed through the thoughts and temperament of the infantrymen on a six-mile incursion into enemy territory. It’s a look at the war from a liberal viewpoint, as a great communal effort to resist fascist enemies. 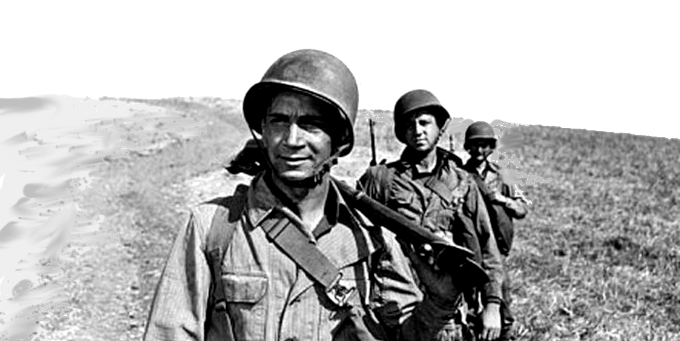 Milestone’s show is a powerful piece of work for screenwriter Robert Rossen, although much of the dialogue is said to come from Harry Brown’s book. It now seems a forerunner of Terrence Malick’s The Thin Red Line. Malick filmed James Jones’ entire book with its multiple storylines, but then stripped out much of the conventional dramatics, and instead told a poetic character story through his soldiers’ thoughts and prayers.

Milestone and Rossen’s approach isn’t as extreme. But they also place docu realism at a further remove. Most noticeable is the use at regular intervals of sung ballads, which also express the thoughts and fears of the infantrymen. Vocalist Kenneth Spencer was once Paul Robeson’s understudy and sings in much the same style as heard in Robeson’s pro-Union advocacy essay film Native Land (1942). The songs imply that the soldiers’ sacrifice will become legendary, but audiences reportedly didn’t like them. Critics compare the use of a ballad soundtrack to the later Fred Zinnemann western High Noon, but from the same year there’s also Fritz Lang’s Rancho Notorious, with its much more aggressive ballad refrains.

The film’s director and screenwriter both encountered serious blacklisting problems. Do these lyrics sound ‘pink?’:

“It’s the walk that leads down through a Philippine town —
And it hits Highway seven, north of Rome —
It’s the same road they had coming out of Stalingrad —
It’s the old Lincoln Highway back home —
It’s where ever men fight to be free.”

The show still functions as a conventional combat picture about an experienced infantry unit that has already fought in Africa and Sicily. One man is killed in the landing craft off the Salerno beach. They immediately head inland, encountering obstacles, splitting up, ‘adjusting’ command when their leader has a nervous breakdown. The title is a poetic understatement — in terms of moral rightness and clarity of purpose, a perilous trek into enemy territory becomes just ‘a walk in the sun.’ 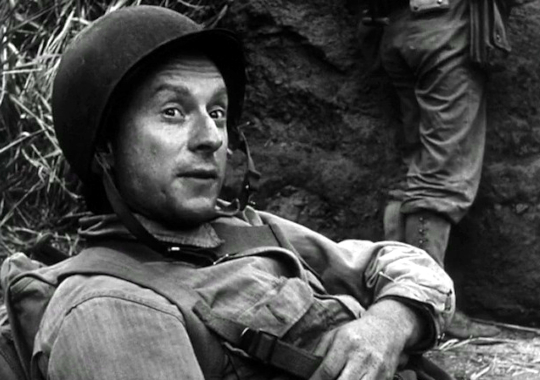 The cast list is a recipe for a great war picture. Mostly relative newcomers, they represent a range of qualities, and the writing celebrates their differing ‘democratic’ attitudes. Dana Andrews is an honest Joe who naturally assumes command. He’s utterly ethical and reliable. Richard Conte and George Tyne are a machine gun team, cocky and smart-mouthed. Familiar faces John Ireland, Richard Benedict, Lloyd Bridges, and Steve Brodie welcome the showcase for their talent, as almost everyone rates extended screen time, often in close-up. The late, great Norman Lloyd (↑)  has fun as a cynical platoon member. ‘Novelty’ casting gives us both comedian Sterling Holloway (↓)  and Dead End Kid Huntz Hall in serious roles. Other young actors give it their best, like John Kellogg, who we remember mostly for playing thugs and villains. It’s easy to imagine Howard Hawks watching this film and saying, ‘Stop looking, I’ve found my Cherry Vallance.‘ 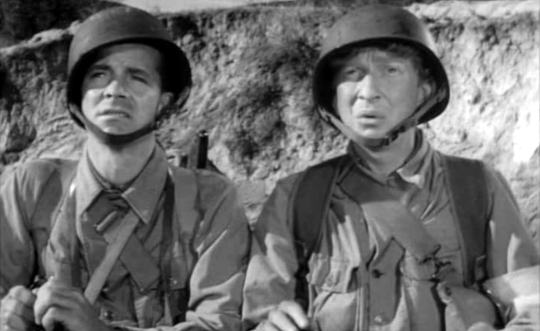 Burgess Meredith handles the omniscient narration; six months earlier Meredith starred in The Story of G.I. Joe, which for quite a while was considered the WW2 European Theater infantry classic. It seems to have been eclipsed by the excellent Battleground, if only because that MGM success saw so much more TV airplay.

With a small budget and few military resources, Lewis Milestone makes this his picture. It’s all about the men, close-up and personal. Combat logic is de-emphasized — what beachhead mission would send twenty men six miles inland to knock off such a tiny bridge?  The resistance they encounter is just a random armored vehicle, one lone strafing fighter plane and a farmhouse with some stubborn defenders, for the conclusion. A ‘bigger battle’ remains over a hill, unseen. The men are deployed in odd ways — in enemy territory, they stroll with their rifles slung and seem too relaxed as they rest under trees. But the strong screenplay allows the characters to carry the film emotionally — we’re heavily invested in the fates of these men.

In all of his war movies Lewis Milestone reuses a filming technique that shocked and dazzled audiences way back in All Quiet on the Western Front. He trucks the camera swiftly down lines of men under fire as they duck and tumble out of the way. In the 1931 film the trucking shot represented the pitiless French machine guns, cutting down young German soldiers as if on an assembly line, turning the trenches into a mechanized killing factory. Milestone uses the same construction again and again — its overuse in Edge of Darkness becomes monotonous. It’s also on view in A Walk in the Sun, where our indentification with each soldier makes every skirmish seem all the more desperate.

Kit Parker/MVD’s Blu-ray + DVD of A Walk in the Sun is a beautiful restoration, with film work funded by the Film Foundation and performed by the UCLA Film and Television Archive. Kit Parker owns the picture outright; five years ago I reviewed his first 2009 DVD release just to promote a possible Blu-ray. I’m glad Mr. Parker was able to follow through.

Mastered in 4K, the new HD picture is sharp, clear and free of the blemishes and iffy contrast of the older transfer. The night opening on the landing craft is much improved, and the dawn shots walking off the beach are beautifully lit by Russell Harlan. The grain is under control and the image is now stable and properly framed, even the optical opening with the cast introduced in ‘book’ form.

Some extras from the old DVD are repeated on the Blu-ray disc. A half-hour making-of talk by the personable Joel Blumberg plays very well. Norman Lloyd’s hourlong talk is a good reference document but full of hesitations where the famed actor and producer tries to think of what to say next.

The second DVD disc contains extras only, all thoughtfully given English subtitles. Its first new item is a polished but disorganized 49-minute featurette called Zanuck Goes to War, the WW2 Films of Fox. It appears to join input from two separate sources, C. Courtney Joyner (on camera) and Alan K. Rode, and is illustrated with good graphics and familiar clips from the Capra ‘Why We Fight’ pictures, etc. Film clips are even shown from a Laurel & Hardy ‘war-related’ comedy. John Ford’s WW2 documentaries weren’t by Zanuck and were only distributed by Fox, but clips are included anyway.

Next up is a ‘new’ 40-minute post-screening discussion between Alan K. Rode and Norman Lloyd at the Aero Theater in Santa Monica, which gives us a much better idea of Lloyd’s engaging personality and excellent storytelling skills. Also present is an encoding of John Huston’s well-known wartime film San Pietro. The cover illustration elevates the 6th or 7th-billed Norman Lloyd to equal status with Dana Andrews and Richard Conte. 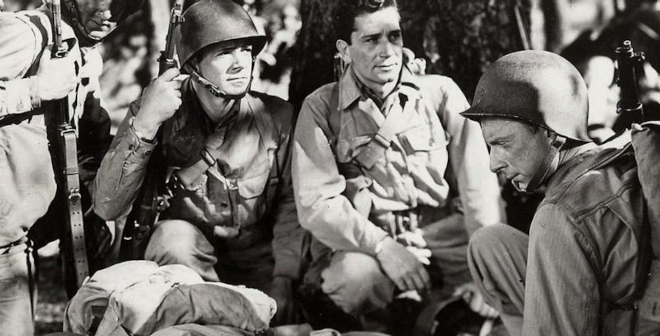 Back on the Blu-ray with the main feature, the best new extra is a feature commentary by Alan K. Rode. It’s packed with facts and judgments about every aspect of the picture: the cast, Milestone and Rossen’s career tribulations and the ‘fuzzy realism’ of the combat action. We find out that the show was filmed on the Fox ranch in Calabasas but also in Agoura, which is now completely developed. It’s a wonder that the film got made at all: fledgling producer Samuel Bronston started Walk but then had to abandon it when his financing fell apart. Milestone and others put together a producing package with Fox to finish the picture. Bronston then petitioned the court to reclaim a piece of the final product!

When I first saw A Walk in the Sun my initial thought was, ‘did Samuel Fuller ever see this?’  Fuller was a WW2 infantryman with a great deal of combat experience, and I was sure he’d take exception to everything in this movie. Alan Rode’s commentary covers that exact subject fully — Fuller wrote a scathingly honest letter to Lewis Milestone, asking how the greatest filmmaker of war reality (All Quiet) could make such an abomination. Alan reads the whole letter out loud.

Sam Fuller’s feisty opinions are always welcome, even if Milestone, Rossen and Co. were going for a ‘spiritual rumination,’ not a documentary approach like Wellman’s The Story of G.I. Joe. This show remains a beautiful war movie, and is definitely on Lewis Milestone’s list of bona fide classics.