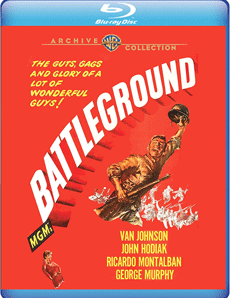 “The Guts, Gags and Glory of a Lot of Wonderful Guys!”
— say, what kind of movie is this, anyway?

Action movies about combat are now mostly about soldiers that fight like killing machines, or stories of battle with a strong political axe to grind. WW2 changed perceptions completely, when a mostly civilian army did the fighting. With the cessation of hostilities combat pictures tapered off quickly, and Hollywood gave the subject a break for several years. 1949’s Battleground is the best of the new, realistic looks back at the infantry war in France. Recognizing that interest in combat stories was coming back, veteran director William A. Wellman and producer Dore Schary used MGM production values to create a convincing Ardennes Forest on indoor sound stages. MGM’s production offices were a battlefield too, as Dore Schary would soon outflank Louis B. Mayer for control of the studio. Battleground is a perfect example of Schary’s more naturalistic approach to popular moviemaking. 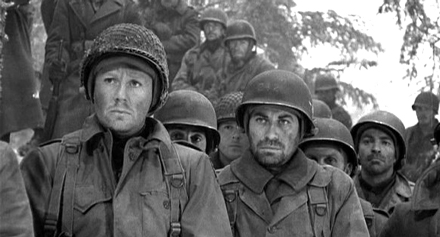 The story is just the plain facts of what happened in France and Belgium late in 1944. The 101st Airborne thinks they’re getting leave in Paris, but are instead sent back into the fray to plug up a surprise German winter advance at Bastogne. The engagement turns into The Battle of the Bulge, with the Americans surrounded. Taking advantage of bad weather, the German counteroffensive hits at an opportune moment. Totally fogged-in, the American troops are cut off from aerial reinforcement.

Battleground plays the plight of the ordinary infantryman for its simple truth. There had been fairly realistic movies on the subject made during the war, notably William Wellman’s own The Story of G.I. Joe (1945). But this snow ‘n’ slush tale concentrates on the mundane problems of combat survival in a winter campaign, with whole battalions of Americans surrounded by a German Panzer division. Instead of weepy letters home or chivalrous gestures of sacrifice, we focus on things like feet: if they freeze, gangrene might set in. Before a soldier can go on sick leave, his toes have to start changing color.

The key image of Battleground that has persisted to this day is the sight of James Whitmore with his feet wrapped in torn blankets, hobbling painfully through the snow  — he’s a Bill Mauldin cartoon come to life. Whitmore personifies the average dog-faced GI fighting away from home. He’s a dirty, unshaven loveable mess, and he knows it will do no good to complain. 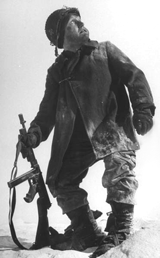 Robert Pirosh’s script avoids the wartime clichés that dogged movies like Guadalcanal Diary. Free of the need to boost morale, soldiers no longer gather like happy campers to sing songs, and nobody talks about their girl or dog back home. Talking about food is discouraged, as the subject is too depressing. The soldiers complain bitterly and are understandably selfish. ‘Nobody cares’ is the first thing heard when they feel they’ve been abandoned. An older foot soldier played by George Murphy is awaiting papers excusing him from duty. By the time his discharge orders come, he’s in the woods with everyone else, cut off and surrounded.

There’s a democratic slant to the way the cast is used. Pretty boy Van Johnson gets top billing but is not a gallant hero. At one point he panics and starts to run away, until green recruit Marshall Thompson appears. Then he’s too proud to flee and they decide to attack together. The most heroic soldier in the outfit is a lanky, bookish private played by no-billing Guy Anderson. His big act is to initiate return fire when the rest of his patrol is shivering in their foxholes. Anderson played the father of TV’s Dennis the Menace. Kids my age can feel what Anderson represents — when I was ten years old, many of the fathers around me had once been soldiers. The really brave ones could just as well have looked like Wally Cox, and I’ve have never guessed.

The casting in Battleground feels better now than when it was new. In 1949 it was all too obvious that the first priority was to keep MGM’s contract players busy, as the bottom was falling out of the studio system. Half of the infantrymen are refugees from musicals (George Murphy, Ricardo Montalban, Van Johnson) trying to make a dramatic mark in post-war Hollywood. Wellman’s no-nonsense direction serves them all well. Besides providing early peeks at talent like James Arness, we see Dewey Martin, Tommy Noonan, Jerry Paris and William Self in tiny bits. The presence of Richard Jaeckel doesn’t count, as he had already been firmly established as a tough teenaged soldier six years before, in wartime combat films. Denise Darcel is the only female glimpsed during the film. She’d enjoy a short run in Hollywood: Westward the Women, Vera Cruz. Douglas Fowley (Singin’ in the Rain’s goofy movie director) is excellent as a cranky soldier with false teeth. Ricardo Montalban’s character is listed as ‘Roderiguez,’ which looks to be a major typo that carried all the way through to the film’s titles — a far as I can tell, there’s no such alternate spelling for the name Rodriguez. 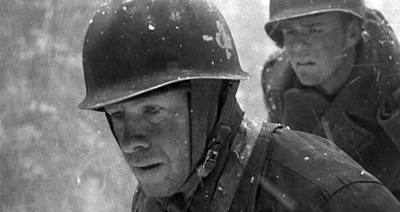 Wartime combat movies usually had a religious angle too, often proclaiming that God is on our side or that there are no atheists in foxholes. Battleground is downright socialistic in this regard, as its Lutheran chaplain talks of holding Jewish services when needed. The prayer scene is subdued and simple, and young Marshall Thompson is shown ignoring the whole ritual.

The film doesn’t try to be a detailed document of The Battle of the Bulge, but is more accurate than the later movie by that title, which has no historical resonance whatsoever. We share the group’s general lack of information. John Hodiak’s newspaperman-soldier complains that his wife back in the states probably has a bigger picture of the fighting than he does. The shivering soldiers don’t know what’s happening more than a few feet away from their foxholes. An historical highlight does sneak its way into the script, the German demand for surrender that was answered with the one word “Nuts.” The film captures the obstinate stubbornness of the American infantryman to the nth degree, and is a respectful portrait of a generation of citizen soldiers.

With popular hits like these, producer Dore Schary gained ground at MGM against big man Louis B. Mayer. By this time the two executives were co-production heads, a conflict documented in Lillian Ross’s book Picture. Mayer preferred musicals and sappy nostalgia and thought that downbeat realism was unfit for audiences. It’s too bad that John Huston’s The Red Badge of Courage was produced under Mayer instead of Schary; without studio interference it might have become known as the most artistic and satisfying of the MGM war-themed movies of the time.

The Warner Archive Collection Blu-ray of Battleground gives us William Wellman’s popular picture in fine shape. MGM and Paul Vogel did well with those interior sets. They look cold, even though the locked-down cameras and established stage techniques had yet to discover a ‘docu’ look that would have made them seem completely authentic. The tricks used later violated the big studio visual rules, where every image had to maintain a full contrast range and a deep field of focus. To us the film’s look is ever so slightly stilted, but I think 1949 audiences easily accepted it as ‘more real’ than glossier combat films. The men do indeed look dirty and unshaven. 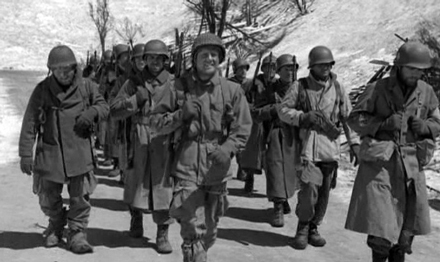 The soundtrack is limited to a few martial themes, with a clean version of the song “Jody” making a big impact, especially at the upbeat ending. Seeing the grinning soldiers march and sing sent audiences out of the theater on a positive note. They were a lot happier than the real Bastogne defenders, that’s for sure.

Warners has retained two 1949 short subjects from their old DVD, boosted up to full HD. A fairly lame Pete Smith specialty piece is called Let’s Cogitate. The choice Tex Avery cartoon Little Rural Riding Hood is a follow-up to Red Hot Riding Hood (1943) that recycles a sexy dance. Its city Wolf/country Wolf theme echoes nicely a thread in Battleground where erudite John Hodiak resents a southern hick’s sloppy speech habits. Hodiak has time to regret his feelings after the man is killed. The film’s original trailer is present as well, also in HD.

The original cover art uses the iconic image of James Whitmore shouting. Playing tough soldiers would sustain Whitmore’s career for at least a decade. Producer Schary tagged him as ‘an ordinary Joe’ for his next year’s fantasy The Next Voice You Hear, also directed by Wellman. Interestingly, the film that makes the best use of James Whitmore’s proletarian integrity is a science fiction movie, 1954’s Them!

In the movie Marshall Thompson plays a green kid paratrooper, which doesn’t make a lot of sense — it stands to reason one would be a little tougher after that rough training. As it turns out, I actually worked with a veteran of the Battle of the Bulge, at The Cannon Group in the late 1980s. I was ten years older than most of my fellow editors, and Bill Cox, an editor with experience at famous trailer houses like Kaleidoscope, was twenty-eight years older than me. We spent many lunch hours alone, so we got plenty of chances to talk. Bill’s first job in the TV industry was holding cue cards for Red Skelton. They way Bill told the story, he went into the regular Army in 1944 when he was barely eighteen. Direct from training he was sent to France, just as the winter snow started falling. Some sympathetic officer gave Bill a break. He was assigned, with no experience, to oversee a French railroad terminal in a city West of Bastogne. The rest of his unit got caught in the Bulge, out in the elements. Bill was in a town and didn’t get caught out in the snow, yet is considered a veteran of the battle. He laughed that he almost froze his feet off, anyway. I never thought to ask him to confirm a bit of trivia from Our Man Flint: is there no service ribbon for the Battle of the Bulge?

Bill passed away in 2014. His obituary read, “Bill was a proud veteran of World War II, having served in the United States Army Infantry and Signal Corps. In recognition of his service at The Battle of the Bulge, the siege at Antwerp, and other campaigns he received a Bronze Star and a Purple Heart.”