The wonder movie of 1946 sees the Archers infusing the ‘Film Blanc’ fantasy with amazing images and powerful emotions. Imagination and resourcefulness accomplishes miracles on a Stairway to Heaven, with visual effects never bettered in the pre-CGI era. Michael Powell’s command of the screen overpowers a soon-obsoleted theme about U.S.- British relations. 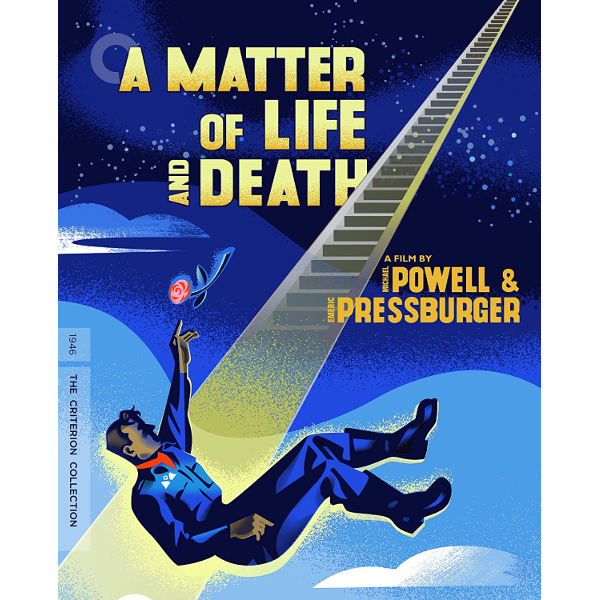 Michael Powell and Emeric Pressburger came into their own making wartime movies, most of which steered far clear of the accepted definition of propaganda. After their Anglo-Dutch unity epic One of Our Aircraft is Missing, The Archers’ follow-up tale of Nazi perfidy The Silver Fleet was handed off to another team of directors. Instead of more morale-builders about sacrifice to the flag, Powell & Pressburger actually took a critical look at England, examining cultural contradictions in the military (The Life and Death of Colonel Blimp) and odd eccentricity in the countryside (A Canterbury Tale). But each film struck a vein of ‘Englishness’ in a way that promoted the English way of life as something well worth preserving. A Matter of Life and Death (re-titled Stairway to Heaven for America) was produced just as the war ended. An unusually creative fantasy that strains the limits of the Technicolor process, it’s also the closest the Archers came to a standard message picture. The government asked them, to come up with something to encourage postwar harmony between England and the United States. 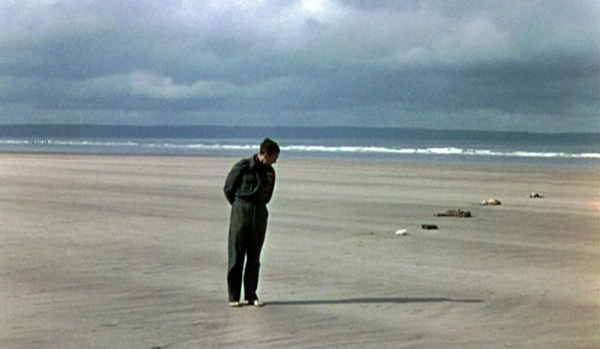 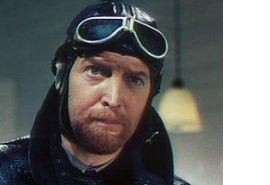 The Archers’ films seem deeply concerned with how England might change after the hoped-for victory. I Know Where I’m Going! makes a plea not to return to the status quo, to free England’s future from selfish business interests. A Matter of Life and Death seems worried that former Allies may have a falling-out. The odd arena for this debate is an ethereal fantasy with its own vision of a celestial hereafter. It becomes personal when we realize that it may exist only in the mind of a British flier who has survived an air crash against all odds.

Flying Officer Peter Carter (David Niven) and American WAC June (Kim Hunter) meet and fall in love over the radio, when Peter reports that he’s trapped in a burning plane, with no parachute. Peter wakes up on a beach, alive but suffering from concussion damage that Doctor Frank Reeves [left] (Roger Livesey of I Know Where I’m Going!) plans to cure with a risky brain operation. But Peter experiences the crisis in the form of bizarre hallucinations. A heavenly emissary known as Conductor 71 (Marius Goring) arrives to escort Peter to the afterlife. Peter refuses to go with the 18th- century French dandy, arguing that his miraculous survival and romance with June are events that Heaven didn’t count on, and shouldn’t revoke. As Peter is wheeled into the operating room, a celestial court convenes to determine his fate. 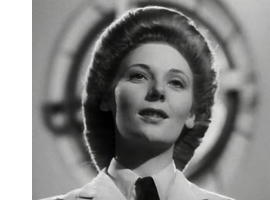 The premise is an elaborate variation on the film blanc form, that fantasy subgenre dealing with heavenly waiting rooms and ‘lost souls’ in limbo between terra firma and the heavenly gates: Heaven Can Wait, Liliom, Between Two Worlds. Reversing the particulars of Alexander Hall’s Here Comes Mr. Jordan, the heavenly bureaucracy in Powell and Pressburger’s story must deal with a mix-up that leaves a mortal alive when he should be dead. In this case, Earth is in Technicolor, and Heaven in B&W. A properly ethereal angel (Kathleen Byron [right] of Black Narcissus) dressed as a servicewoman presides over a glassy reception hall that offers a Coca-Cola machine for the comfort of American fliers. It’s basically the same setup as MGM’s A Guy Named Joe, minus that film’s vindictive, ugly suggestion that non-Allied aviators go straight to Hell — remember, instead of demonizing Germans, the Archers’ Colonel Blimp made a major character a sympathetic German. All of this heavenly hoo-haw is kept on the edge of ambiguity — it could all simply be a figment of Peter’s concussion. The notion that dreams and reality can coexist is further echoed in rehearsal scenes for an amateur play of A Midsummer Night’s Dream.

Heaven is populated by multitudes from every culture and time period, which accounts for Conductor 71’s presence as Peter’s personal contact man; the 18th- century Frenchman makes jests on how he lost his head to the guillotine. Marius Goring is given the film’s most famous line, upon arrival in the full-color real world: “Ah, how one is starved for Technicolor up there!”

Peter’s trial resonates with the classic legal battle in William Dieterle’s film blanc The Devil and Daniel Webster. The prosecutor is a Yankee patriot from the American war of independence, the stern Abraham Farlan (Raymond Massey). Farlan would rather not see the Boston-bred June entangled with a no-account Englishman, especially one that ought to be dead. Alfred Junge’s designs make the fantastic heavenly trial a wonder to behold, but it’s also the weakest part of the film, sort of a public service message for Uncle Sam to lend a helping hand to its former ally. The war finished with England a financial wreck, exhausted on all fronts. Powell and Pressburger’s mission was to counter U.S. grumblings that America shouldn’t be aiding a monarchy still ruling over a far-flung empire. The film’s fairly inspiring heavenly trial simply emphasizes two countries’ shared traditions and values. The on its own. The sequence is admirable when elevates notions of racial equality, even if its image of happy nations united under the Union Jack is flawed. For help in fighting the war, England had all but promised freedom for key colonies, yet continued to oppose independence movements.

The film’s real emotional climax plays out on a personal level. It’s a replay of the cosmic dilemma from Fritz Lang’s classic silent Destiny (Der müde Tod): faced with a terrible, no-win choice, June volunteers to take Peter’s place in the afterworld. As in Liliom, a single teardrop changes the lovers’ shared fate.

Powell’s visual imagination makes A Matter of Life and Death a sheer wonderment, aided immensely by Jack Cardiff’s Technicolor artistry. Live action is routinely combined with matte overlays of abstract artwork. Dramatic scenes are accompanied by splashes of expressive color, reds and yellows that suffuse the film frame with a stylized theatricality. Dr. Reeves’ camera obscura is like a private cinema that he uses to observe life around his house, while the beginning of the brain operation is seen from Peter’s POV, with the camera peering through a giant set of eyelids.

The beach where Peter Carter washes up is a hazy plain with waves converging on a vanishing point; it’s interesting that 66 years later, when Terence Malick needed a visual to represent the hereafter in The Tree of Life, he fell back on a similarly vast tidewater beach. A subsequent encounter with a nude goatherd convinces Peter that he is indeed dead: “Where do I report?” he inquires. Peter assumes that he’s still an airman, indicating that the B&W heavenly arrival center may only be a figment of his imagination. Visual magic is a major theme. 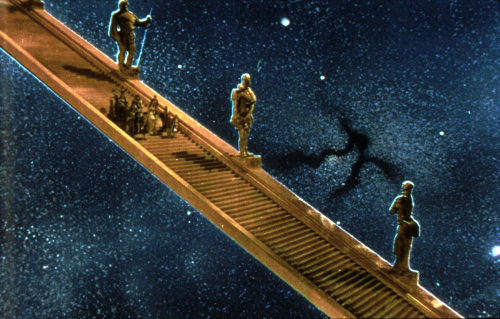 The big illusions take place in heaven, dominated by a stone escalator that stretches into a galactic infinity. When the two domains meet, B&W combines with full color in several shots. Disembodied ghosts walk through walls, an effect that must have been difficult to achieve in the complex Technicolor printing process. A pink rose marks transitions between worlds, and conveys the tears that prove June’s love. The complex manipulations of the Technicolor process remained a secret for years, and ensured that Jack Cardiff would become an instant camera legend.

Powell and Pressburger’s penchant for eccentricity doesn’t loosen the film’s grip on our emotions. Peter and June have formed a spiritual bond that heaven cannot, as they say, pull asunder. The most memorable images remain the enormous Technicolor close-ups of David Niven and particularly Kim Hunter, radiant at the center of the miracles. A Matter of Life and Death is a playful, reassuring transition between the tragedy of war and the hopes for the future. It’s almost shameful to watch it now — our parents that endured the war years must have felt betrayed by what has been made of the world since then. 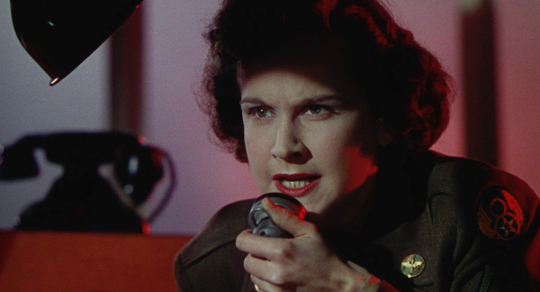 The Criterion Collection’s Blu-ray of A Matter of Life and Death is a real stunner. Sony released an okay DVD back in 2009 (and we were grateful for it) but it looked no better than the UK Carlton transfers that persisted of most of the color Archers pictures. Remastered in 4K by Sony, this Blu-ray release is like watching an entirely new show. As Criterion proudly explains, the original 3-strip film negatives were scanned and digitally combined, a process that has produced a strikingly clear and colorful image. We now see how perfect is the animated Outer Space prologue that opens the picture … did it perhaps inspire a similar idea for Frank Capra’s holiday movie of the same year?

The film’s color contrasts are now almost painful to the eye. Rendered in a silky B&W, Powell and Jack Cardiff’s Olympian hereafter hums with a futuristic efficiency — with fantasy architecture that improves on Things to Come, on which Cardiff worked as a camera assistant. The blends between the color & B&W realms are beautifully managed as well.

Ian Christie offers a dependably thorough and expert commentary. In Sony’s older intro Martin Scorsese gives us his memories of discovering Michael Powell’s films long before meeting the director. Thelma Schoonmaker’s heartfelt new interview is the best thing on the disc. We learn that Carter’s brain malady is medically accurate for epilepsy, but that the filmmakers weren’t allowed to use that word. Craig McCall spent a large part of the 1990s filming his interview docu on Jack Cardiff, and a shorter piece here concentrates on the cameraman’s experience on AMOLAD, his first major camera credit. Stephanie Zacharek’s concise, inspiring liner note essay is what newbies ought to read first, after witnessing the wonderment of A Matter of Life and Death. Young adults will gasp when told that one bit player, the cherubic flyer smiling in heaven, is none other than Richard Attenborough of Jurassic Park.

We’re told that Alfred Hitchcock recommended Kim Hunter for the film, and other accounts say that both Powell and Pressburger traveled to Hollywood to find their June. But in his biography, Powell describes bicycling a lone print of Hunter’s first film The Seventh Victim across a bombed-out London, to show it to Carol Reed. And we have already learned from Criterion’s own disc extras for A Canterbury Tale that Kim Hunter had filmed extra scenes for the American re-cut of Powell’s earlier A Canterbury Tale.

About that naked goatherd kid on the beach, the one that makes Peter Carter think he’s dead in heaven: I think it’s the same child actor that plays the heroic boy in Alberto Cavalcanti’s Ealing thriller Went the Day Well?  At least the voice sounds identical.