Here’s a sterling example of what Hollywood excelled at back in the golden age: Robert Montgomery, Evelyn Keyes, Claude Rains and Edward Everett Horton star in possibly the most magical of movies known as Film Blanc. A cosmic goof leaves a man with fifty years yet to live without a body — so heavenly troubleshooters try to find him a new one. 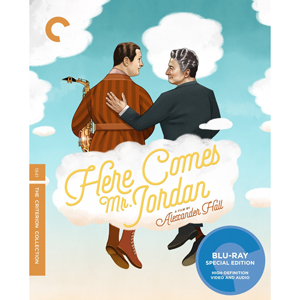 Some movies are so entertaining that it’s best to tell people, “see it first,” no matter what they think they want to know about it. 1941’s Here Comes Mr. Jordan would be in a class by itself if it hadn’t launched an unending wave of similar fantasies in which humans cross back and forth between reality and the afterlife — an afterlife imagined as a cloudy heaven, with its own set of bureaucratic rules. Mr. Jordan might be the first film to put this in a comedy context, but the style can be traced at least as far back as the bittersweet tragedies of Fritz Lang’s Destiny and then versions by Lang and Frank Borzage of Ferenc Molnar’s Liliom. Of course, in literature the same sort of stories go much farther back. Mr. Jordan just launched the style as a ‘forties staple. With the world at war and everybody thinking about mortality on one level or another, the idea was a natural. 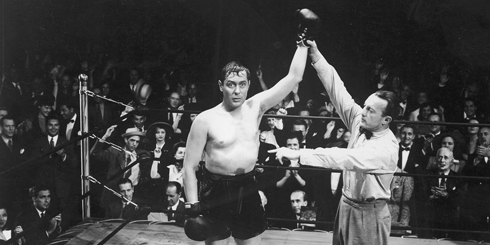 The Columbia release has a confusing history of remakes and sound-a-likes. It’s originally from a Harry Segall play called Heaven Can Wait, the title of which ended up on Ernst Lubitsch’s unrelated 1943 comedy with Don Ameche and Gene Tierney. When Warren Beatty remade Mr. Jordan in 1978, he reverted to the Heaven Can Wait title. In a further wrinkle, director Alexander Hall brought back three of Jordan’s characters, played by two of the same actors, for 1947’s Down to Earth.

The delightful Mr. Jordan turns the idea of death, a search for a body and crazy identity switches into a funny, romantic and finally wistful meditation on existence. Saxophone-playing boxing contender Joe Pendleton (Robert Montgomery) insists on flying against the wishes of his manager Max Corkle (James Gleason). When the plane crashes, inexperienced heavenly messenger 7013 (Edward Everett Horton) prematurely separates Joe’s soul from his body — he was supposed to live another fifty years. To compensate, the wise heavenly supervisor Mr. Jordan (Claude Rains) finds a temporary home for Joe’s soul in the just-murdered body of Farnsworth, an unscrupulous banker. In his new guise as Farnsworth, Pendleton falls in love with Bette Logan (Evelyn Keyes). Joe is therefore understandably upset when Mr. Jordan tells him that he’ll have to move on to yet another waiting body, to live out the rest of his fifty allotted years. 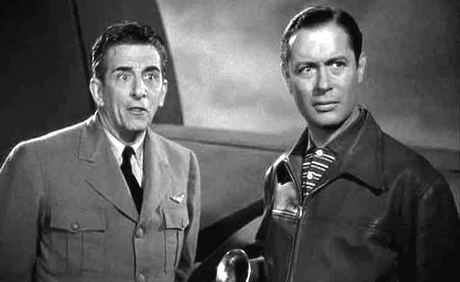 The kind of film we’re talking about was dubbed ‘Film Blanc’ sometime in the 1970s, a name chosen to suggest the inversion of the style called Film Noir. This is essentially the “heavenly waiting room” movie, a fantasy that proposes a fantastic continuity between life and death. The basic formula is from Ferenc Molnar’s play Liliom wherein heavenly overseers grant a suicide the opportunity to return to earth to see what’s become of the daughter he never knew. Films Blanc frequently present a protocol problem that taxes the cosmic system. Someone must return to earth as a ghost, or something remarkable is revealed about a man’s life when viewed from an ethereal point of view. The most common theme is the persistence of romance: Love cuts across all boundaries between earth and heaven. One need not believe in spiritual miracles to realize that life itself is miraculous.

Usually, the lighter in tone a Film Blanc, the more successful it is. Fritz Lang’s version of Liliom walks a fine line between satire and pathos, while the even darker Death Takes a Holiday and Outward Bound (remake: Between Two Worlds) drift through various morbid moods. A more positive view of existence is found in Heaven Can Wait, A Guy Named Joe, The Horn Blows at Midnight, It’s a Wonderful Life, A Matter of Life and Death (Stairway to Heaven), Down to Earth, Defending Your Life and Groundhog Day. An extensive gallery of Films Blanc can be perused at Bill Shepard’s impressive website Film Blanc — The Cinema of Feel-Good Fantasies. I’m proud to say that I inspired Bill to start this Film Blanc Page. 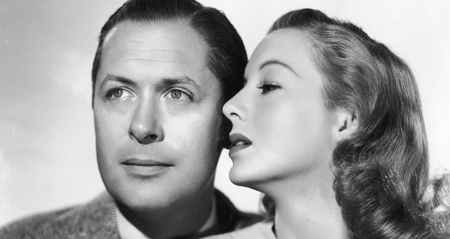 Here Comes Mr. Jordan is a prime example of the classic Film Blanc in action. Boxer Joe Pendleton becomes the ward of angelic advisor-counselors after his earthly body is accidentally destroyed; the calm Mr. Jordan and his hyper assistant 7013 take his case as if he were a stranded plane passenger in need of V.I.P. handling. In addition to its ghostly comedy and amusing identity mix-ups, the tale puts forward an optimistic and uplifting message. The human soul is a wondrous thing that lives after us, even if it takes new forms and new identities. Our essential goodness will be passed on to those that follow. Neither does Love doesn’t die with one’s mortal body. That person you just met may have some special relationship to you, beyond your ability to perceive it. Is the notion of romantic love a recognition of this invisible affinity?

A fable as delicate as this one needs special handling, and Here Comes Mr. Jordan stands out as one of the better-cast pictures of its time. Fresh from a decade of romantic comedies, Robert Montgomery plays Joe Pendleton as an idealistic softie. It’s important that a Film Blanc character be more than a puppet of supernatural forces, and Joe frequently takes the initiative. The young Evelyn Keyes also scores as a woman with a unique romantic problem. Her Bette Logan character deals admirably with the heartbreak of loss and is rewarded with a spiritual rebirth.

The film is an excellent example of orchestrated characterizations, with its strong personalities arranged as harmonious opposites. Heavenly emissaries Claude Rains and Edward Everett Horton regulate the traffic between the realms of existence, keeping tabs on lists of newly arrived souls. Rains’ unflappable manner and smooth voice are ideal for the godly Mr. Jordan; Horton’s fussy comic relief makes Rains seem all the more benevolent and wise.

The most amusing character is James Gleason’s Max Corkle. As the boxing manager staggered by Pendleton’s fantastic reincarnation as Farnsworth, Gleason serves as an ideal audience surrogate and handles most of the physical comedy. The twinkle in Gleason’s eye endeared him to audiences through dozens of pictures, all the way to Charles Laughton’s chilling The Night of the Hunter.

Director Alexander Hall keeps his focus on the exceedingly likeable characters, saving his visual/theatrical touches for must a few moments. Mr. Jordan’s heaven is a foggy ‘nowhere’ between Earth and Heaven, a visual concept that would become the standard Film Blanc setting. Other Films Blanc use elaborate art direction and special effects to envision the afterlife as a vast alien world, but the simplicity here easily wins out over the likes of What Dreams May Come with its unending CGI illusions. The filmmakers know that everyday miracles like falling in love more often than not happen in ordinary places, like a walkway under a boxing arena.

Here Comes Mr. Jordan is one of those ‘frivolous’ fantasy concoctions that viewers never entirely forget. Montgomery’s Joe Pendleton becomes a better, more thoughtful person when he’s transformed into Farnsworth. He also carries the benefit of his emotional experiences with him to a third and final identity. Personal destinies in Film Blanc can be as frustratingly fatalistic as Films Noir, but Here Comes Mr. Jordan envisions a Fate that cooperates to help us live out our dreams. 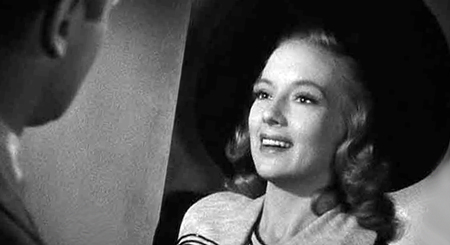 The Criterion Collection’s Blu-ray of Here Comes Mr. Jordan. The restoration a number of years ago was a collaboration between Sony and the UCLA Film and Television Archive, and a new 2K digital work-over has resulted in a polished, glossy final product — that wistful heaven never looked better. Frederick Hollander’s music score doesn’t date like some others from this era – when Joe toots a tune on his saxophone, it’s some unrecognizable older song.

The extras begin with a radio program from 1942 featuring Claude Rains, Evelyn Keyes and James Gleason and a trailer. A 1991 audio interview with Elizabeth Montgomery expresses her sentimental memories of her father. The most entertaining extra is a delightful conversation between Michael Sragow and Michael Schlesinger that celebrates the film’s special qualities. Their enthusiasm for the film comes through very strongly — they’d make an excellent Siskel-Ebert pair for future discussions.

Perhaps the idea of calling this group of films ‘Film Blanc’ didn’t catch on, or has been rejected by the critical establishment? I find it very useful in understanding pictures as varied as Peter Ibbetson and Peggy Sue Got Married, but the term is used nowhere in Criterion’s special edition. The term Film Noir has been so distorted and diluted that it’s perhaps wise to downplay its use, but I don’t think that has happened quite yet in the case of Film Blanc. Farran Smith Nehme provides the insert essay.

You know, I never thought of it before, but the faulty sci-fi movie Millennium might have been inspired by Here Comes Mr. Jordan. It’s also about fantastic forces pulling people out of crashing airplanes — but not to heaven, to the future.