Michael Powell and Emeric Pressburger officially become ‘The Archers’ for this sterling morale-propaganda picture lauding the help of the valiant Dutch resistance. It’s a joyful show of spirit, terrific casting (with a couple of surprises) and first-class English filmmaking. 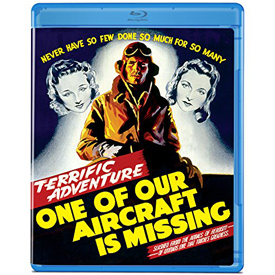 There are still a few more key Powell-Pressburger ‘Archer’ films waiting for a quality disc release, Contraband and Gone to Earth for just two. This month Olive Films thrills us with One of Our Aircraft is Missing, their first collaboration to carry the full ‘Written, Produced and Directed by’ shared authorship credit, if not a archery bull’s eye logo. Contraband and 49th Parallel are wartime thrillers, and the pair also made a couple of war-themed short subjects, but Aircraft is a full-on morale/propaganda piece about a combat mission. Both this film and the Archers-produced The Silver Fleet (recommended) focus on the Netherlands, and were made in cooperation with the House of Orange government-in-exile in London. 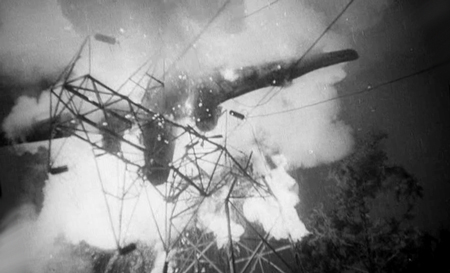 The story is simple enough: a bomber crew returning from Stuttgart must bail out over Holland. Frightened at first, they discover a Dutch citizenry ready and able to hide them and help them escape — an ‘underground railroad’ is in place to get them to the coast. To put an emphasis on national solidarity, the aircrew is a broad cross-section of Brit officers; one is even a knight. It’s the age angle that raises eyebrows. Star Godfrey Tearle was pushing sixty at the time, but it’s not a cheat — the manpower problem was so acute that there were fliers that old. They do give Tearle’s upper-class warrior a plebian battle station — tail-gunner.

The suspenseful story sees the fliers first make contact with Dutch children, who bring them to a communal farming village where a shrewd woman makes them prove that they’re not German spies. They’re passed off to a Burgomaster, who tries to unite them with a missing crewmember. Spiriting them to the coast requires a game of disguise and the cooperation of the church.

Powell & Pressburger’s screenplay makes Brit-Holland relations a Utopian setup. The downed fliers are all in good spirit, uninjured and with a sense of humor. Most every Dutchie they meet is already on their side, and are as determined to repatriate them as they are to get back. Holland comes off as an ideal society, with bright and motivated citizens, almost all ‘right thinkers’ that love the English, despite past centuries of bitter economic conflict (and there must have been a war or two in there somewhere as well). These Hollanders are practically thanking the bombing crews for accidental strikes on Dutch soil. 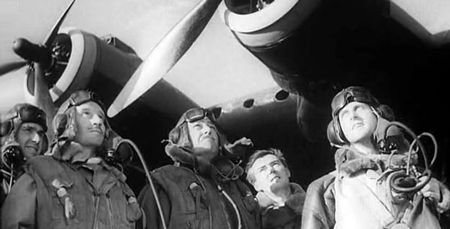 Rather than detail the plot, let me go over some of the actors, most of whom aren’t household names. The war may have given opportunities for new blood in Brit movies, from the stage and from quota quickies that didn’t get exported to the U.S.. We know some of the flight crew already: Godfrey Tearle is the villain with the missing finger in Hitchcock’s The 39 Steps, while we barely recognize a thin Bernard Miles, another Hitch villain in The Man Who Knew Too Much ’56 . Eric Portman is in many pictures but is notably the ‘glue man’ in the Archers’ wonderful A Canterbury Tale. Emrys Jones wasn’t an actor yet but was signed because he could play soccer. That the Brits and Hollanders share the love of football is milked for extra harmony.

Things get more exciting on the Dutch side of the cast list. Few actual Netherlanders are on view, but the British make them all seem to be heroes. The marvelous Pamela Brown (“I Know Where I’m Going!”) starts us off as a sharp-minded woman (so sexy, too) who first interrogates the men from the air. Joyce Redman is (I think) a bright blonde; she became famous twenty years later as the lady who shares a hilariously erotic meal with Tom Jones. The great Googie Withers (Dead of Night, Night and the City, Miranda) is the smuggler who has to get the fliers past the Germans watching the Dutch coast.

The cast list reveals James Donald (Quatermass and the Pit) and Gordon Jackson (The Ipcress File) in small parts; I didn’t spot them. John Longden (Quatermass 2) has a role with lines, as does director Michael Powell. Hammer fans will recognize Arnold Marlé from The Man Who Could Cheat Death and especially The Abominable Snowman, where he plays a mysterious High Lhama. 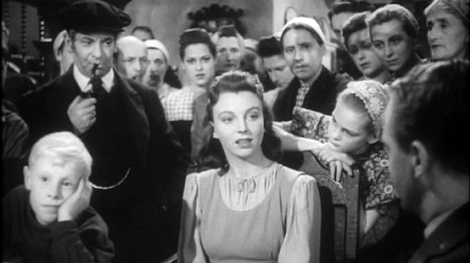 The two biggest names don’t need introducing, although this is a first feature film for each of them. Dancer Robert Helpmann (The Red Shoes,  Chitty Chitty Bang Bang,  55 Days at Peking) is riveting as, what else, a verminous Quisling. And slipping in with only a couple of lines is a young Peter Ustinov, almost impossibly thin as a calm and supportive priest. Not a bit of playfulness or irreverence shows through — this has to be Ustinov’s only ‘straight’ role. It’s interesting that the screenplay actually has one of the fliers, who is strictly Church of England, get a bit ruffled when a necessary step in the escape is attending a Catholic mass.

None of The Archers’ wartime movies is conventional, and One of Our Aircraft is Missing has eccentricities that a ‘straight’ propaganda piece would avoid. When the fliers must don disguises as Dutchmen, the actor among them goes in drag, with the comedy aspects completely downplayed. None of the fliers seems bothered that they bailed out of an airplane (it looks like a Wellington) that promptly started running properly again. Unmanned, it limped all the way back to England on its own power. [ If this sounds like gross incompetence, it’s not… much stranger things happened in real life. ] The movie is framed in a flashback from the crash of the plane into some British power lines. The ‘phantom plane’ idea is revisited in The Archers’ later A Matter of Life and Death, where a similarly disabled plane ‘flies itself home,’ with a doomed pilot aboard.

Powell & Pressburger use no music score. The ‘music’ for the bombing raid (over some incredibly detailed miniatures) is simply the changing drone of the planes engines and the pop-pop explosions of the animated flak effects. It’s all natural sound, without aural cues that tell us a suspense scene is coming. The tone is odd too: we’re told that everything happening is vital, yet nobody is sweating it out or folding under the pressure. The flight crew takes it all in stride, yet we still feel we’re seeing something realistic. I especially like the finale. The entire cast is about to be captured by a German destroyer, but the English naval officers simply assay the situation, make the right decision, and all is solved. The filmmakers don’t invent crucial moments requiring superhuman individual efforts. Everybody works together, Dutch and Brit, so that things turn out right. Googie Withers is even given an excuse to drop her factory clothes and hair scarf, to eat with the boys in a flowing gown and sleek hairstyle. It all seems a triumph of chivalry. 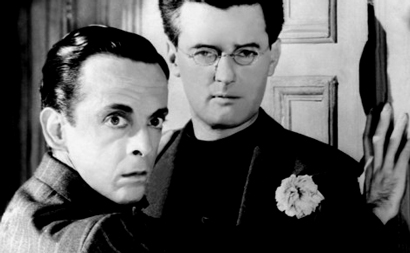 Yet the story is based on cruel fact. An opening title tells us of a number of Dutch civilians executed for helping British fliers. After the war there was a social debate, a backlash against stiff-upper-lip WW2 sagas proclaiming how a ‘classless’ society won the victory. One of Our Aircraft is Missing is falsified partly because it was deemed unwise to reveal anything about the reality of undercover work still happening in occupied Holland — where German reprisals were indeed cruel and ruthless. Writer Emeric Pressburger objected to some aspects of The Silver Fleet being fictionalized, but the authorities didn’t want to provoke the German occupiers to institute even harsher reprisals. So the slightly humorous tone of Aircraft is meant to build solidarity between the new nations, and to get the English public to appreciate the sacrifices being made by comrades already conquered. [ According to code master Leo Marks, for much of the war the Nazis had compromised the entire Allied spy organization in Holland. They sent out false communications and arrested all new agents parachuted in. Successful Dutch resistance had to stay completely independent. The full story is pretty horrible. ]

As filmmaking One of Our Aircraft is Missing has the best talent England could offer. The editor is David Lean, then a career cutter just getting his break in directing, through Noël Coward. The footage of the airplanes is beautiful, as are the in-flight simulations showing ‘moonlight’ reflecting off the ponds and canals of Holland and Germany. Can today’s audiences appreciate the high drama of making a film like this, when the enemy was just a few miles away? If England lost, what would Hitler have done with the British intellectuals and artists producing this anti-German propaganda?

For the remainder of the war Powell & Pressburger made no more direct-combat propaganda pictures, and only supervised the somewhat similar The Silver Fleet. Their subsequent films became controversial for not being anti-German propaganda. A Canterbury Tale is an eccentric, almost mystical home front story that presented an argument why England was worth preserving, worth defending to the last man. The expensive The Life and Death of Colonel Blimp goes so far as to lampoon aspects of the British army, while suggesting that the Germans will some day again be friends. Those are radical positions — there were surely Britons that protested Powell & Pressburger as traitors to the war effort. Yet all of their patriotic pictures, including One of Our Aircraft is Missing, are two cuts above the standard definition of war morale fare. Instead of feeling rage or vindictiveness, we exit with hope, and a good attitude about people in general. 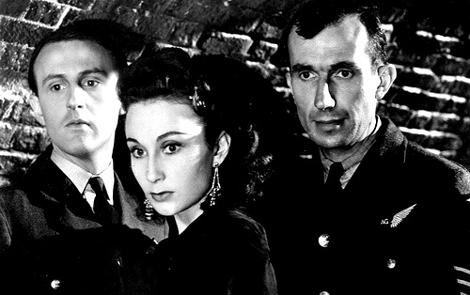 Olive Films’ Blu-ray of One of Our Aircraft is Missing is in great shape. It is also the long version — the one shown in America and subsequently on most TV showings was a full twenty minutes shorter. The excellent transfer helps us tell who is whom in all those ‘hiding in the dark’ scenes. Things are serene and cheerful the morning after the bailout, with the fliers sitting around the tall grass studying maps, etc. When the Dutch children show up, the clear audio flatters the Dutch language. It’s as if our boys have dropped into Munchkinland.

There are no extras but Olive generously provides English subtitles.

I personally found only one part of the film disturbing. I’ve heard about rescue buoys like the one we see, but I think I’d go crazy if you stuffed me into one … bobbing around on the choppy water of the English Channel (North Sea?). In the exteriors the thing is pitching like a cork. On the inside it seems unrealistically placid. The claustrophobia! They must have kept pills in those things to tranquilize people.

Another great Archers film! I hope that Criterion upgrades more of its P&P holdings to Blu-ray… it is one truly remarkable run of marvelous movies.