Don’t let your boss see this movie, it’ll give them ideas. Writer-director Kaneto Shindo reduces the human drama to its basics, as an isolated family endures a backbreaking existence of dawn ’til dusk toil to eke out a living. It’s a beautiful but humbling ode to adaptability and human resolve. And the show has no conventional dialogue. 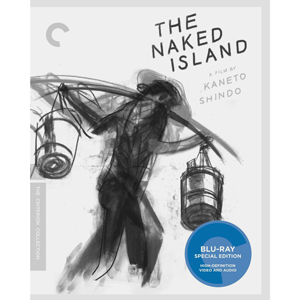 Writer-director Kaneto Shindo started his own production company in the 1950s earning critical attention but not great success with pictures on topical themes — the legacy of Hiroshima, the story of the fishing trawler irradiated by a hydrogen blast. As explained by scholar Akira Mizuta Lippit, Shindo put all his resources into one last movie that would be very different. 1960’s The Naked Island (Hadaka no shima) is an elemental story that simplifies things to the basic human equation that’s been man’s condition for thousands of years — the subsistence farmer eking out a living with his bare hands, without modern technology.

Life for husband and wife Senta and Toyo (Taiji Tonoyama & Nobuko Otowa) is endless repetition and toil under the hot son, on their tiny, arid island. They cultivate little crops on perhaps less than an acre of land, by means that seems totally unreasonable. There is no water on the island, so they row a skiff for what looks like more than a mile to the mainland, draw water from a well and transport it back, two buckets at a time. They then haul it up a steep path, and ladle it out individually on their plants. That’s the basic formula for existence. Senta and Toyo have two young sons Taro and Jiro (Shinji Tanaka & Masanori Horimoto). The oldest goes to school on the first boat out and comes back later in the day. Together the boys appear to do all the cleaning and a lot of the food preparation. 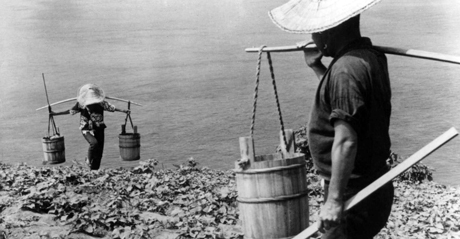 The Naked Island is a basic narrative but also a meditation. It has no conventional dialogue, although some song lyrics are heard, as is laughter and other noises. For almost thirty minutes we watch the family repeat their endless work cycle. Nobody complains or questions this. Some of the work plays out with just natural sounds, and other scenes are graced by Hikaru Hayashi’s beautiful music. Considering the subject at hand, we’re surprised that the music is so appropriate. The family is living a brutal existence but also one in harmony with nature. This is amply expressed by the equally breathtaking cinematography, which surrounds them with the beautiful ocean and bright cloudy skies. They’re humble but neither ignorant nor dirty. They live and interact as a family; it’s just that 99 percent of what we see is hard labor. They bathe in an old oil drum. After the father and the sons take their turn, Toyo gets her chance to soak when it’s almost dark. It would seem to be her twenty minutes of pleasure for the entire week. And she surely had to haul every drop of water all the way there. These people have dignity and independence, and what looks like a very precarious setup. If one or the other mate were to fall sick or be injured, nothing would work. Is the idea for the sons to get normal jobs and support the parents when they’re old, or will they have to carry on this prehistoric way of life?

One thinks of the advantages enjoyed by all but the least fortunate American. And of an image from an old 60 Minutes, of an Indian family living in such a crowded place that they only space they can claim is a narrow strip between two railroad tracks. They live and cook and sleep right there, with trains moving constantly just a few inches away. Unthinkable, but real.

There’s Robert J. Flaherty’s old semi-documentary movie Man of Aran; those Irish island farmers must haul dirt as well, in an effort to grow potatoes on bare rock swept by wind and rain. The Naked Island isn’t as harsh as that. Kaneto Shindo came from a farming family and wanted to express the dignity of that life with an extreme example.

The movie’s stylization makes it seem as if these people never talk, but they do have contact with the outside world. The eldest boy catches a large fish, and they sell it in the town to buy a nice restaurant meal and a new shirt. They also look at a TV in a store window, and can’t figure out what the odd dancer is doing. We don’t know if they disapprove of the technology, or of the girl in the picture (she’s wearing a leotard). For perhaps one day, they’re ordinary tourists, laughing and playing. There’s no indication that they conceive of their home life as we probably would, as an unendurable hell.

A family emergency hints at what would concern us city people about their lifestyle. Yes, they have the rare luxury of being independent from society in their day-to-day living, but the isolation also puts them far away from help. How are we to be critical? Some of us live in places hit regularly by tornadoes, typhoons, floods. I should be making preparations for an overdue earthquake, considering what’s happening all around the Pacific Rim. Am I? Not really. These people live with unforgiving reality every day. They labor like ants in a nest, just to keep pace.

Shindo’s camerawork and direction are beautiful, but not to a degree that glamorizes. It looks hot and dry and the only water available must be carried on one’s back. I very much like Godfrey Reggio’s Powaqqatsi, which communicates a similar awe for human resilience. It’s also been criticized as making the tough third-world struggle into ‘pretty pictures.’

At the thirty-minute mark, and then near the end, Shindo places events that involve the spilling of water, one accidental and one on purpose. Each stops the show dead in its tracks, emotionally. The first event involves a bit of violence between Sanda and Toyo that seems outrageously wrong, yet they accept it. The other is a moment of rebellion — just a moment — that I fear would be my constant reaction to a life like this one. When I think of the tiny sacrifices (that’s stretching it) I make for my spouse, there’s no comparison. A movie like The Naked Island is good for the soul.

The film was a success for Kaneto Shindo. The Japanese critics that praised his movies about nuclear horror — he was born in Hiroshima — were tepid on this experimental effort. But The Naked Island was a hit as an export item, reaching the U.S., France and even the Soviet Union as an Art Film that didn’t come with a political message. I suppose it was a novelty item, in that curious filmgoers would be captivated by its beautiful images and then drawn into its universal story. As it has almost no subtitles, it also jumps all language barriers. Shindo was able to continue making movies; his best-known ’60s pictures are a pair of horror-costume dramas, Onibaba (the shocker with the scary masks) and Kuroneko (a ghost story).

I discovered The Naked Island as simply “The Island” on Los Angeles’ channel 9 KHJ TV, which in the middle ’60s must have had a creative program director on staff. Saturday nights around 10 pm KHJ screened adult foreign movies like The L-Shaped Room, surely edited for content. I saw The Sky Above, The Mud Below and The Easy Life there dubbed into English. The Naked Island must have been pan-scanned.

The Criterion Collection’s Blu-ray of The Naked Island is a sterling transfer of this exotic one-of-a-kind picture. The B&W Tohoscope images are truly beautiful, without adding artifice to the reality of this tiny island. Shindo makes good use of a helicopter at the beginning and the end, for aerial shots that indeed make the family look like ants on the sandy ground.

Kaneto Shindo provides a video introduction and a full commentary (subtitled) for the show; these were recorded in 2011 for a retrospective of his work. Composer Hikaru Hyashi is on the commentary as well. I believe we’re told that actor Benicio Del Toro, a big fan of Shindo’s work, organized the retrospective. Del Toro appears in a featurette to praise Shindo, and is seen interviewing him. Film scholar Akira Mizuat Lippit’s longer look at The Naked Island evaluates the effect of the occupation on Japanese films. Heplaces Shindo’s work midway between the older traditionalists and the radicals of the 1960s. Lippit provides most of the facts for this review; he tells us that for the sake of reality, the actors carried full loads of water at all times. What we’re seeing is all real.

A trailer and an insert essay are included as well. I’m afraid that I still can’t get past the violent incident at the half-hour mark, as believable as it is. My mind also drifts to thinking of ways that the family could lessen their burden. That skiff looks as if it could carry more than two buckets at a time… and one would think they might try to work out some clever plans to catch and retain rainwater. These thoughts are outside the spirit of what is a very good movie.