Some critics wondered if Alec Guinness and John Mills should have swapped roles for this adaptation of James Kennaway’s incisive novel about popularity vs. discipline in the command structure of a Scots army brigade. Ronald Neame’s direction is exemplary, showcasing the powerhouse performances yet avoiding theatrical flourishes. And the movie introduces Susannah York as well. Criterion’s 4K remaster greatly improves on their older DVD release. 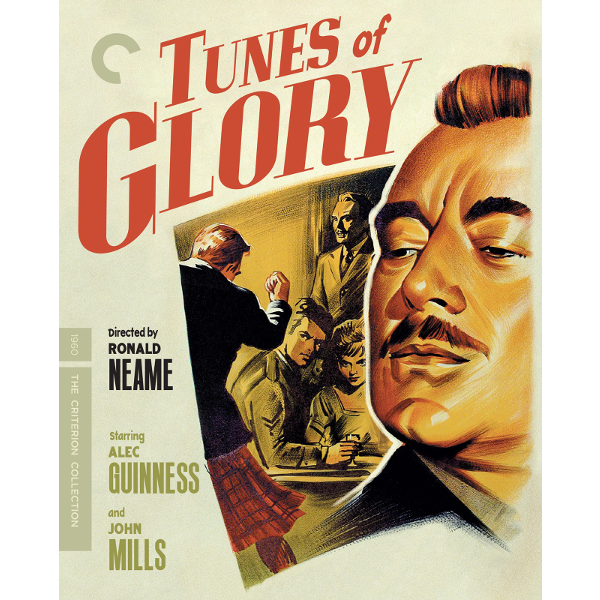 1960’s Tunes of Glory hasn’t persisted in revivals, and neither is it the kind of film to play often on TCM. And fine points of leadership and personality in the Army isn’t a subject guaranteed to appeal to film critics. But Ronald Neame’s show remains one of the finest dramas ever about the pressures of popularity and authority in any organization. Some say that it contains Alec Guinness’ finest performance, a characterization that goes against every type the chameleon-actor ever played. The bluff, thick-headed, nervy Jock Sinclair is the exact opposite of Guinness’s Colonel Nicholson in Bridge on the River Kwai. His enthusiasm for traditional military life is matched by an equal insensitivity to officers without his particular background or experience. 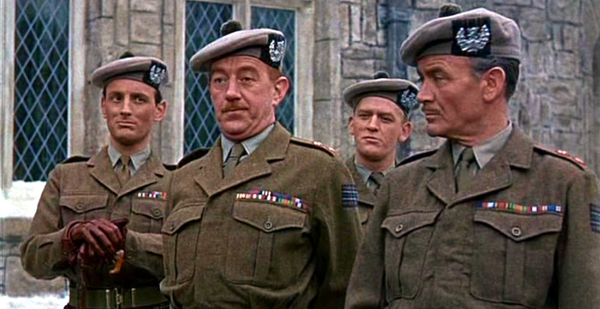 Things are not happy at an army base out in the Scottish highlands. Scottish Major Jock Sinclair (Alec Guinness) reliquishes command of the battalion to the new Colonel Basil Barrow (John Mills). He stubbornly demeans and ignores his new commander’s orders and wishes, effectively keeping the high-strung new officer from bonding with his men. Barrow’s response is to be more firm, which only increases Jock’s determination to humiliate him. A battalion social with the locals becomes a disaster when Jock pushes Barrow too far. But Barrow gains the upper hand when Jock loses control as well, striking a piper (John Fraser of Repulsion) for secretly dating his daughter Morag Sinclair (Susannah York of The Silent Partner). The offense could end Jock’s military career, but Barrow wants to be lenient … a decision that might be a big mistake.

Tunes of Glory may be down in the records as Alec Guinness’ film, but John Mills also shows how great acting works. In the quiet and introverted part, he’s is every bit as compelling as the more celebrated star.Mills communicates his varied states of inner turmoil simply by embodying it in his manner and actions.

James Kennaway’s screen treatment boldly displays both sides of the conflict while abstaining from final judgments. Jock is a loutish braggart and bully but is beloved by his men for the sincerity of his convictions. He’s fair in his way, even as he demands that his orders be obeyed to a tee. Commanders are not supposed to be so buddy-buddy, frequently drinking and carrying on with their men. Jock makes it work to a degree, but he is blind to the fact that regulations are slack and that his whisky pal Major Charlie Scott (Dennis Price of Victim) doesn’t share his unbridled camaraderie. Jock’s command is jolly on the outside, but it’s really his own little fiefdom where everyone must do things his way — drink whiskey or else, for one thing.

Quiet and reserved, Mills’ Colonel Barrow nevertheless wishes to make the battalion his own. His attempt to shake things up is stymied when Jock directly blocks his authority. Shielded by his example, Jock’s cronies among the officers are all too ready to defy Barrow in small points of conduct — talking behind his back, showing disdain in their attitudes. Unfortunately, the sensitive Barrow doesn’t have Jock’s unlimited self-confidence. Jock is able to defy and embarass him, and make it all seem Barrow’s fault as well. The Colonel falls far too easily into Jock’s traps, creating public scenes that diminish his stature among his men. 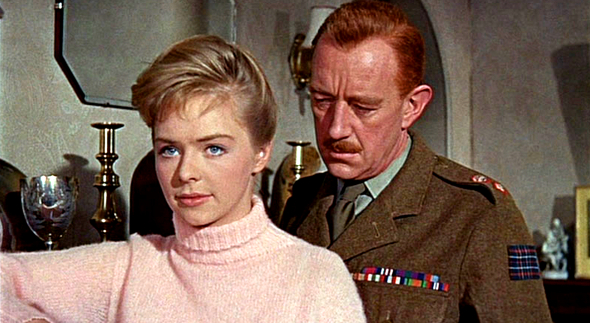 Neither man can change their essential nature. Jock can be reasonable at times, but he has little real respect for the rights of others. Barrow has some hidden scars that cause him too much anguish, and he doesn’t handle adversity well. It may be that he needs too much to be loved by his men, just as does Jock.

The other officers range from insolently ‘loyal’ to quietly fair, but most externalize their personal reactions. Allan Cuthbertson is known for playing military prigs, as in The Stranglers of Bombay; his Captain Simpson has the sense not to get involved in the emotional nonsense around him. Curiously, the best choice for command is Dennis Price’s Major Scott, a cold fish who keeps his feelings hidden. Scott seems sinister because he doesn’t show the weakness that his peers do, but his consistent decorum trumps the transparent emotions around him. Even when Scott recommends a court-martial, Jock knows he’s no turncoat. The hearty Army life embraces rough traditions, including it seems, tragedy in the ranks when personal issues come to the fore.

Tunes of Glory’s view of military life makes an interesting comparison with that of John Ford’s sentimental cavalry pictures. Similar traditions and petty conflicts arise, such as the problems that come up when a soldier dates the commander’s daughter. Ford insists on a harmonious army society, in which the greater drama of warfare makes facing personal problems and conflicts unnecessary. Death or denial effectively solve most grievances. Tunes of Glory is about the practical calamities of command, not about the building of a ‘grand’ society.

The film has little action but doesn’t feel like a filmed play. The clammy-cold castle sets (the dawn dance scene is a chiller) are excellent, as are the production values. Color is smartly used to pinpoint moods and atmospheres — the darkness outside the barracks, the grey skies over the parade ground.

Guinness and Mills are backed by a terrific group of actors, each given a complex personality to play. Kay Walsh is sympathetic as Jock’s sometime-girlfriend, to whom he runs when he thinks he’s in trouble. John Fraser and Susannah York are a fine young couple. York positively shines in her first film; at age twenty she still has a teenager’s baby fat. Duncan Macrae and Gordon Jackson are particularly interesting as a fair-minded piper and Barrow’s helpful adjutant. Down the list further are the notable Percy Herbert of Mysterious Island and the diminuitve Angus Lennie of The Great Escape. Andrew Kier is said to be in there somewhere; we didn’t spot him.

The Criterion Collection’s Blu-ray of Tunes of Glory is the expected improvement over the older DVD. A new 4K scan of a better film element has eliminated some glaring film damage on that old transfer, a vertical discoloration stripe on the final reel. Colors are subdued but appropriate for the cold and snowy setting — face tones are rich. 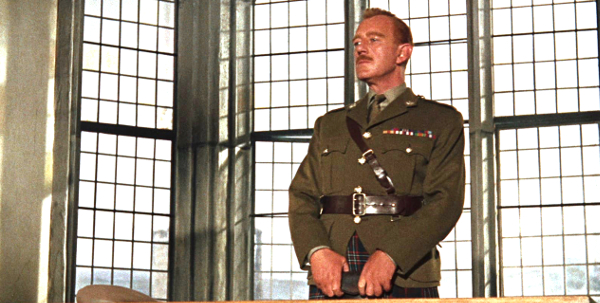 Criterion’s extras, repeated from their earlier DVD release, feature three good interviews. Director Neame is seen in a pleasantly lucid L.A. interview, talking about the project as if he filmed it just yesterday. John Mills’ audio-only piece is polite but less illuminating. A 1973 English television interview with Alec Guinness is quite good — it covers his earlier career before singling out his work on Tunes of Glory. Guinness is uncharacteristically candid with his answers … it must have been a good day.

Robert Murphy’s perceptive liner essay is a plus. The evasive original trailer tries to sell the show as a rollicking, spirited story of Army life using Guinness’ Bridge on the River Kwai association. Who wants to see a rollicking, spirited story of Army life, then or now?  It appears to be an American trailer. It lists Lopert as the distributor, perhaps indicating that UA released Tunes of Glory only on the Art-film circuit.