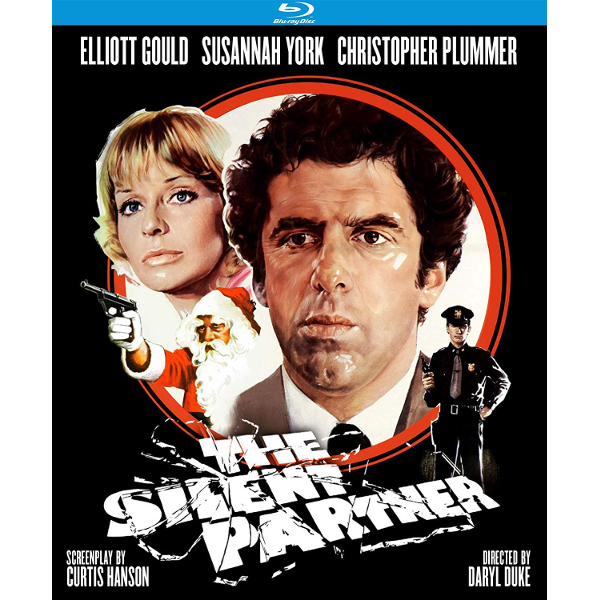 “We grab each moment and we make it count!”

The Silent Partner is a wonderful sleeper that most viewers saw in the first years of cable television screenings. It’s the kind of low-profile thriller that wouldn’t become popular for a few more years. The clever, tense script by Curtis Hanson (White Dog, L.A. Confidential) finds new twists in old crime capers, setting up a tense battle of wits between Elliott Gould’s amateur crook and Christopher Plummer’s genuinely scary robber. When things get rough The Silent Partner doesn’t go soft; it backs up its threats with some nerve-jangling gore.

Timid bank teller Miles Cullen (Elliott Gould) never acts on his instincts, repeatedly backing away from involvement with his interested co-worker Julie Carver (Susannah York). But when he catches a shopping mall Santa Claus monitoring deposits at his teller window and realizes that he is going to rob him, Miles puts a daring plan into operation: to keep most of the cash for himself and let the robber get away with just a few bills. The ruse works beautifully until after the crime, when the thief Harry Reikle (Christopher Plummer) confronts Miles, demanding ‘his’ money. Cullen finds himself in a secret partnership with a homicidal maniac, and must retaliate with his own dirty tricks to keep the cash, stay out of jail — and stay alive.

The talented director Daryl Duke (Payday) has an uneven film career; his admirers were always waiting for him to break through with a big success. The Silent Partner enjoys a stealth reputation among thriller fans but otherwise is not well known. This Blu-ray release ought to win Mr. Duke many more fans.

Curtis Hanson’s taut script comes from a Danish book that appears to be a pulp crime variation on Conrad’s The Secret Sharer, in hard-boiled crime mode. With its focus on a pairing of amoral male figures, it might also remind viewers of Patricial Highsmith’s The Talented Mr. Ripley and Strangers on a Train. Elliott Gould’s milquetoast clerk Miles Cullen doesn’t seem like the kind of guy to mastermind a crime; his only visible interests are tropical fish and chess. But Miles has two secret desires: to bed the boss’s mistress and abscond with the receipts from his place of employment, an upscale Toronto mall. He doesn’t know how he’ll do either until he predicts that a robbery is about to happen. One cash-box switcheroo later, the pistol-packing Santa at his teller window is forced to flee relatively empty handed. The authorities assume that the crook took the $50,000, when most of it is hidden in a bag at Cullen’s feet. I assume that real-world banking procedures would prevent a bank employee like Miles Cullen from pulling off this particular heist …. I mean, are tellers really allowed to keep personal bags and containers beneath their cash drawers?

But Christopher Plummer’s sadistic Harry Reikle is no fool. He takes out his frustration by beating up a woman, and then puts the pressure on Cullen to fork over the cash. Neither crook can call the police without exposing his own culpability. The terrifying, murderous Reikle has the definite edge. But Miles is smart enough to know that giving Reikle the money is no solution, as the maniac will undoubtedly kill him just for fun. Cullen instead frames the crook for another crime, starting the ball rolling on a deadly game of tit for tat. That’s when a regulation dusky dame comes into the picture, adding further confusion to Miles’ schemes. Elaine (Céline Lomez) is a sweet nurse who took care of Miles’ elderly father and liked Miles’ looks when she saw him on television … or so she says. If that’s not enough of a complication, Julie Carver may have already figured out Miles’ entire caper. Is her amorous interest stimulated by his newly discovered boldness, or his secret bank account?

The Silent Partner is beautifully paced and plotted with sexy and shocking surprises. Miles’ tropical fish aquarium becomes the focus of several scary scenes, in sort of a gruesome precursor to A Fish Called Wanda. The deadly Reikle turns out to be both a fearsome adversary and a genuine master of disguise. Daryl Duke anchors the story in the everyday routine at the bank, with its various company intrigues; there’s enough amusing detail to suggest a crime takeoff on The Shop Around the Corner. The manager is carrying on an affair with Julie. Julie would rather be with Miles, if Miles would only stop acting like Clark Kent. One amorous make-out scene goes cold when Miles is interrupted by Reikle’s phone threats. Julie has little choice but to decide that Miles is some kind of a nut. Susannah York paints an interesting picture as the frustrated Julie, stuck in an unfulfilling job. She’s the one suggesting that “We grab each moment and we make it count.”   But is Julie playing the same kind of game that Miles is? Céline Lomez’ Elaine sees herself as a conquering siren, but is actually far more at risk even than Miles … she already carries scars, ‘love pats’ from Harry Reikle. A fringe benefit is a small contribution by Second City star John Candy, as another teller who falls in love with the bank’s sexy new trainee (Gail Dahms). Miles’ reticence with his co-workers reflects his reluctance to fall into the same pattern of petty philandering. He has bigger ambitions.

Elliott Gould uses only a smidgen of his ‘cute’ acting tricks; it’s the best performance I’ve seen from the actor. His Miles Cullen counts on being underestimated by everyone around him. Miles also has the backbone of a determined poker player, making him a surprisingly effective underdog hero. His boss in the bank thinks he’s a chump, and feels free to dun him with humiliating lectures. As he cooperates fully with the police, Miles affects a passive, vacant sincerity that keeps suspicion far out of anybody’s thoughts.

The surprise is that Gould is extremely well-matched against the high-powered actor Christopher Plummer. The Canadian-born star hadn’t seen all that many good movie rolls since his “G”- rated turn in The Sound of Music. He’s a revelation as the utterly uninhibited villain, easily besting all but the most violent giallo killers in the savagery department.

Many Canadian productions of the time tossed in exploitative elements in the theory that they were needed to crack the American market, a gambit that had worked well for the producers of David Cronenberg’s horror films. This show offers several well-staged nude scenes worthy of a lurid paperback thriller, as Miles discovers that his secret life of crime is somehow making him more attractive to women … maybe. The most gruesome scene created a problem for the production; we’re told that Daryl Duke handed off the direction of at lease a few shots to someone else.

Yes, what with surveillance cameras that now capture everything, the shenanigans played by Miles to beat the system wouldn’t work today. But the The Silent Partner is an almost perfect blend of crime-time suspense, with the daring Miles proving himself the equal of his crooked, perverse nemesis. The story’s best quality is its simplicity. The means by which Miles Cullen cuts himself in on Harry Reikle’s thievery is utterly convincing, and their deadly game of cat-and-mouse is tense, funny, and fascinating.

The KL Studio Classics Blu-ray of The Silent Partner is a big improvement over a Lionsgate DVD from 2007. The image is pleasing but not perfect, especially the opening sequence, a wall-to-wall optical to incorporate the main titles. A veneer of fine digital grain-patterning seems present on everything. Was the film shot with softening filters perhaps? It always looks as if we’re seeing a copy somewhere down the photochemical duplication line, yet the image is as good and better than the frame grabs seen here. The picture is also good enough to show us new details of Harry Reikle’s strange characterization. Besides the eye makeup he wears, it looks as if Harry paints his nails as well. Or is he just prepping for another of his disguises?

The strong audio track is a showcase for Oscar Peterson’s classy, highly effective music score. This satisfying production is just one good decision after another.

I’ve always wanted to learn more about this show, and KL provides a pair of fine extras. The commentary with Howard S. Berger, Steve Mitchell and Nathaniel Thompson is chatty and indulges in some hair-splitting psychosexual analysis, yet it also puts across a wealth of information about how the film came about, and its disappointingly narrow distribution. Nathaniel nails down the actual facts about who shot the notorious fishtank scene; and he tells us that the standard soundtrack album for the movie, contains very different cues. I was curious about these and other questions answered in the commentary — one reason that the movie received a spotty distribution is because the Canadian Tax shelter laws that made it possible removed the motivation for do-or-die promotion: the investors would make a profit even if it weren’t shown at all. Star Elliott Gould goes on camera to discuss the picture in a pleasant monologue. After years of being complimented by strangers, he all but admits that it’s one of his top titles. Gould does a bit of lightweight name-dropping and drifts off topic a little (‘I was positioned to be a producer for a while ’cause I know interpersonal chemistry’) but makes good points about his co-stars and Daryl Duke, a director he calls brilliant. He’s as impressed as we are by the Oscar Peterson music, and comes off as an honest, down to earth guy.

The movie comes with a stack of trailers for Elliott Gould, Susannah York and Christopher Plummer. The package design for this title has always had problems. The DVD purveyors in 2007 gave us a meaningless cover graphic showing walking figures that looked like something from Reservoir Dogs. This time around we get okay representations of Gould and York, but Christopher Plummer’s Santa Claus with a gun will only confuse people. And a figure of a policeman really gives one the wrong impression as well. I think the movie needed a sexy pulp fiction look, or perhaps a completely abstract graphic. The Silent Partner promotions should have stressed the totally truthful big claim that it’s something entirely original.