Noir Nirvana isn’t found amid literary swells and hoity-toity art connoisseurs — but in the trenches of humble Eagle-Lion Films, where Richard Fleischer, Lloyd Bridges and a hotter-than-hot Barbara Payton steamed up the streets of Los Angeles circa 1949. The Film Noir Foundation experts give us an expertly curated slice of hardboiled crime — Eddie Muller dubs it ‘To Live and Die in L.A.,’ but in the year that the Reds took over mainland China, and the USSR exploded its first Atom bomb. 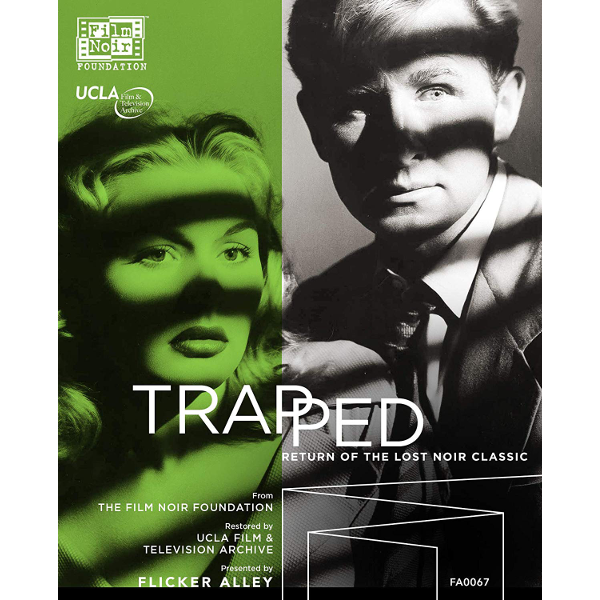 The Film Noir Foundation has done it again — the non-profit has racked up sufficient rescue-restoration victories to quality as the most effective film detectives not working directly from inside a public institution. Their most miraculous save-job prevented a terrific noir thriller with a female protagonist from possibly being lost forever: 1950’s Woman on the Run. 1949’s Trapped is another dazzling example of a threatened noir, the loss of which would constitute a real crime. For the last forty years it has been seen only in terrible, blurry Public Domain copies.

The movie is really special. It’s one of Eagle-Lion’s follow-ups to the great Anthony Mann/John Alton hits T-Men and Raw Deal, made by an all-pro team determined to do a bang-up job — and boost their careers. Leading lady Barbara Peyton made a striking debut, and director Richard Fleischer further enhanced his credibility as well. Basically another undercover agent tale about a counterfeiting ring, this modest noir makes the most of the thriller format. The progressive-thinking Earl Felton-George Zuckerman screenplay jumps ahead of the audience more than once, fooling us as to what exactly we’re seeing.

The picture has a surplus of the elements that make crime noir so much fun. This time around a crook is the main character — Lloyd Bridges impresses as a greedy, slippery convict disinterested in moral reform. Barbara Payton delivers the hot-number looks and projects her sex appeal emotionally as well; it makes sense that this modest film would launch her brief but impressive career. At five-foot-four she was an inch or so shorter than James Cagney — which surely helped win her the co-starring part in her next picture, Kiss Tomorrow Goodbye.

The Treasury Department springs prison inmate Tris Stewart (Lloyd Bridges) to help track down a gang of counterfeiters that have gotten a hold of a terrific set of printing plates. An elaborate ruse sets him up Tris as an escapee. Tris is supposed to go undercover for the law but instead eludes supervision and contacts his old cronies with the goal of selling a huge amount of bad money to fund a Mexico getaway. He reunites with his old girlfriend Meg Dixon (Barbara Payton), a nightclub cigarette girl. Meg puts Tris in contact with John Downey (John Hoyt), a shady, well-heeled gambler interested in fronting the cash for the hot money deal. Tris doesn’t know it, but he’s still under surveillance. Will the T-Men shut down the shady operation?

Trapped is charged with the crisp economy and dynamic camerawork associated with Richard Fleischer’s best noirs. Despite their scripting drawbacks  The Clay Pigeon and Follow Me Quietly keep the screen energized at all times, and the better-constructed Armored Car Robbery and The Narrow Margin are genuine thrill-a-minute classics. Trapped keeps us on our toes, making us think we’re seeing a daring escape when it’s really an elaborate charade. Tris is double-crossing the Feds but they are fooling him as well — they never thought he’d honor his commitment to be a double agent. Tris Stewart is soon holed up in Los Angeles, snuggling with his good-time bad-reputation girlfriend. In Hollywood he schmoozes with the Mr. Big of the counterfeiting scheme, Sylvester (James Todd). In Bunker Hill Tris strong-arms a weakling former associate played by the great Douglas Spencer, doing a superb drunk act.

Trapped finds new wrinkles with the gimmick of an undercover agent working under deep cover, partnering with the key crook as a gambit to nab an entire gang. We think of Dennis O’Keefe in T-Men and Edmond O’Brien in White Heat as successful undercover agents. In the escapist spy 1960s adventures of James Bond, the suave undercover man somehow defeated villains without going undercover at all. Trapped’s suave, womanizing 007 analog is played by none other than John Hoyt, who does excellent work. The acting feat is doubly impressive considering that Hoyt was in no way a standard heroic type — he played a range of characters but is most associated with unpleasant villains, as in When Worlds Collide.

It’s great seeing the un-glamorous John Hoyt do so well in the ‘James Bond’ part. The only actor that tops him is Werner Peters in Fritz Lang’s The 1,000 Eyes of Dr. Mabuse. His shrimpy insurance salesman ‘Hieronymus B. Mistelzweig’ is revealed as a top agent, and saves the world!  Hoyt’s John Downey encounters the same problem that trips up undercover agents in earlier Eagle-Lion thrillers — an old associate recognizes him in public, and loudly blows his cover.

Trapped suspends its characters in a nice balance of trust-suspicion. The crook Sylvester carefully sets up the money exchange with John Downey, while the T-Men hover in position to nab them all. Most of the show takes place in Los Angeles, which gives us wonderful time-machine views of familiar locations. The insert booklet with this disc includes Richard Fleischer’s ‘playbook’ illustration that shows the path taken through Hollywood for a car pursuit. I’m going to have to study the scene with the map in hand — some of those streets are totally transformed today.

The big rendezvous-exchange scene, with cars sneaking into position and cops hidden in plain sight, takes place on Fountain Avenue west of Fairfax, just a couple of blocks from the Director’s Guild Theater. As it’s semi-residential, at least that location looks somewhat the same now.

The real I-don’t-believe-it shot begins in a diner on Hollywood Blvd. The view from the sidewalk looking North allows us to see a familiar church, located where Highland Avenue jogs to the right to enter Cahuenga Pass. But we’ve never seen it from this distance, from this angle.  Then the camera pans left, and we see Grauman’s Chinese Theater, just across the street. The entire block to the East of Grauman’s is just parking lots, allowing a clear view of the Church. Today the whole area is a massive development, including the Kodak Theater where the Oscars are handed out every March. Trapped is a Free-Range noir thriller, that pays off with excellent on-the-street visuals that become unforgettable time machine moments.

Trapped is too slickly made to actually stumble but it does become a little odd in the final act. Our main character simply bows out just before the finale, handing the concluding conflict over to secondary characters. It’s as if the star player had to bow out because of a contract, or he took a better deal and left Fleischer’s show in the lurch. Neither sounds true to the actor involved, who had a 100% reputation for dependability and straight shooting.

The other less-than perfect angle is the conclusion’s replacement villain, who lacks charisma but steps forward to dominate the set piece action finale. His ‘difficulty’ at the end involves the same trip-up that dogged Joe Beacom, Orfeo and Bernard Ryder, if you get my drift. The beautifully filmed action chase is set in an underground stable for L.A.’s streetcars, called a Car Barn. It’s yet another place that isn’t there anymore, more lost history in the City of the Angels.

Flicker Alley’s Blu-ray + DVD of Trapped is said to have been rescued by The UCLA Film Archive from a collector print that was donated to Harvard University. The Film Noir Foundation premieres a new restoration almost every year. I was lucky enough to see Trapped last Spring at the opening night of one of their Noir City festivals.

The transfer is a tad low in contrast, so don’t expect many inky blacks. But the detail is rich, and it comes with a solid audio track. The night street outside Barbara Payton’s nightclub may be a studio set, but most every other exterior exploits real locations from downtown to Hollywood to Malibu. We’re told that the show had a full 30-day shooting schedule, and it certainly doesn’t look cheap.

Flicker Alley and the FNF put together another smart Blu-ray package that gives the viewer special value. The layout of the menus, packaging and an attractive insert booklet is excellent; we reel at the advertising illustrations that capture Barbara Payton’s tough-girl beauty — Meg is a real head-turner, but in no way is she a girl to take home to Mother.

The twin featurettes are well worth watching all the way through. Eddie Muller and disc producer Alan K. Rode enjoy themselves mightily explaining the film’s graces, while justifiably expressing pride in their rescue. At one point we see what Trapped looked like in its wretched Public Domain version, which helps our appreciation of the restoration. On-camera expert Donna Lethal joins Muller and Rode to plumb the tragic, sordid downfall of Trapped’s Barbara Payton.

And although he’s not 100% sure, Eddie Muller thinks that Lloyd Bridges literally dropped out of picture before the finale because he fell sick. Makes sense to me.

Some disc extras have suffered when the children of stars become involved, but the 11-minute piece with Richard Fleischer’s son Mark is a keeper. We hear only one or two overly familiar stories — Mark’s thoughtful, intelligent memories give us an even better appreciation of one of our favorite directors. And the featurette made me look up the word ‘sedulous.’

The last time I looked, Amazon was showing an incorrect, inflated base price for this disc.

Alan Rode and a very welcome Julie Kirgo collaborate on the audio commentary, striking a congenial tone that goes beyond dispensing facts and figures. Their show-biz perspective allows the duo to talk about Bridges, Hoyt and Payton candidly without being disrespectful. Sizing up the notorious Barbara Payton they explain that she was a wild one on and off the screen, ‘liked men’ and was especially attracted to troublemakers and bad boys. I’m just not the type, I guess.

Rode and Kirgo do get around to complimenting cameraman Guy Roe, who I keep seeing in the credits for creative, good-looking, but overlooked movies. Roe did great work for Fleischer, Douglas Sirk, Anthony Mann and Cy Endfield, and matched the look of a Japanese movie to create new scenes for a revered monster classic.