Style can be the star in Classic Noir, making a less prestigious film more entertaining than one with bigger names. Dennis O’Keefe, Claire Trevor and Marsha Hunt spin an excellent crime-love-murder triangle, for a road picture that’s one of the best Noirs not made by a big studio. Director Anthony Mann and cinematographer John Alton dial up the intensity for an experience as rich as the best pulp crime fiction. 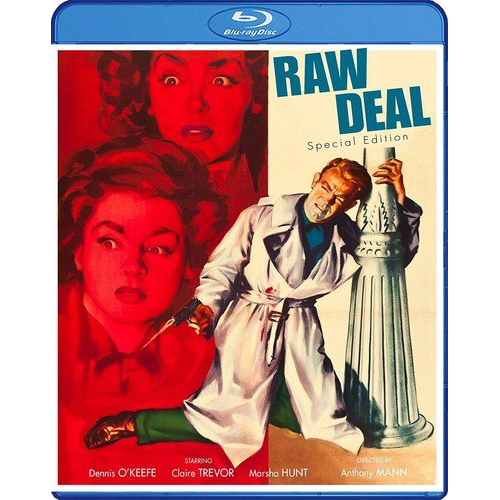 Blasting the Screen with “T-Men” fury!

For several years after the publication of 1979’s Encyclopedia of Film Noir I found myself scouring TV Guide in search of literally dozens of films that the book highlighted. I’d seen many at UCLA but many more eluded me for years. With the arrival of cable TV only a couple of local stations still showed late-night features. The only way to see something like Detour or even Criss Cross was to set one’s alarm clock for two or three a.m. and get a cup of coffee ready. Some hotly desired titles, like Decoy remained elusive for decades, until near-magical original prints showed up at the great Noir City Festival. Others existed only for years in terrible P.D. copies. The Film Noir Foundation has helped to get several more noirs restored and out on disc, and now ClassicFlix has found some circuitous route to restore (for video, at any rate) several more titles.

Raw Deal, the second of the collaborations between Anthony Mann and John Alton, is one of those pictures that I thought I’d never see in presentable quality. Seemingly composed from entirely second-hand elements, it nevertheless comes across as original and individual. It’s a fated Loser Noir with a heavy dose of Amour Fou. Like Tourneur’s Out of the Past it’s both hardboiled and intensely romantic. Its conflict between virtue and wrongdoing continually suggests that the world is a value-challenged amoral nightmare. What’s more, women carry two of the film’s three leading roles, and they’re just as important as the leading man. Even in supposedly progressive noir thrillers, the woman could easily be an accessory, some one to simply reflect the hero’s problem. One of the women also narrates, a hardboiled function almost always reserved for a man. Generally speaking, female roles in films became more codified and structured with the enforcement of the Production Code. Film Noir’s anxious characters and twisted morality found its own female stereotypes, yet allowed them more complexity.

Mann and Alton’s “T-Men” was a sleeper hit for Eagle-Lion. A supposedly ‘authentic documentary,’ it nevertheless excited the industry with its highly stylized visuals. Raw Deal is a more traditional crime noir, with much stronger characters. It’s less radical in form, but more emotionally involving. The public remembered “T-Men” but I’ll bet that Raw Deal was the show that brought Alton and Mann the big-studio job offers. Ace noir screenwriters Leopold Atlas and John C. Higgins fashion Raw Deal as a study of a man under pressure. Our villain/hero escapes from prison only to find a succession of traps await him. Tough guy Joe Sullivan (Dennis O’Keefe) could wait three years for the pardon promised by his legal caseworker Ann Martin (Marsha Hunt). He chooses instead to break out with the aid of his faithful lover Pat (Claire Trevor), who makes the arrangements and drives the getaway car that spirits him away from the penitentiary. All should be good, for Joe is really innocent: he took the rap for gangster Rick Coyle (Raymond Burr), and the $50,000 that Coyle owes him will give he and Pat a new start in Latin America. The problem is that Coyle has no intention of paying Joe anything. He instead assigns the perverse killer Fantail (John Ireland) to eliminate the Sullivan problem. Pat and Joe’s flight from the law takes a twist when Joe steals Ann’s car to help with the escape — and brings Ann along so she won’t turn them in. It’s a kidnapping-lite: Ann is already infatuated with her client and simply wants what’s best for him. The getaway is traumatic for Pat — she sees her entire life crumbling, as Joe starts to think of her as a ‘partner,’ and no longer his lover.

Raw Deal has to be Eagle-Lion’s finest hour. From the opening shots we know we’re looking at something special. Backed by Paul Sawtell’s weird, dreamlike music, Claire Trevor’s Pat breaks with convention by reciting a female ‘doomed narration,’ dropping a fatalistic pallor on everything we see. The Mann-Alton images outdo what we’re accustomed to seeing in studio work. It’s a matter of taste and discretion: the camerawork mostly tweaks reality with expressionistic touches. Corridors stretch farther than normal. Ceilings press down on human figures. A wire mesh screen blocks Joe away from Pat, and half-blots him out.

The stylization has a nice way of reducing visuals to their essentials. While one of the heroines thinks over a bad decision she’s made, all we see is a choker close-up of her face, and a dark wall with a large clock that emphasizes her need to make amends. Dennis O’Keefe is as effective a noir hero as any actor working; his character is interesting because he’s a tough guy unwilling to admit he has scruples. These are ignited by Marsha Hunt’s ‘innocent’ lawyer’s assistant Ann, who we know from the beginning is attracted to this dangerous man. Ann frequently makes the case for law-abiding decency, but when push comes to shove she finds that she’s willing to break the commandments as well. Claire Trevor’s Pat is a big surprise as well — a hardened dame unaware that she’s capable of an unselfish act or two. The dramatic puzzle pieces are all generic, but the way they play out is a continual surprise. The film’s crooked romantic triangle is so successful, one of Eagle-Lion’s ad pitches sold the film as a woman’s picture. The plight of the characters is not just clever Noir plotting. The hero may be a cynical loser, but we can feel the emotional commitment of his women.

Anthony Mann’s hallmarks of grotesque violence get full rein here. The hulking Raymond Burr casually uses fire to enforce his power over people, and at one point throws flaming liquid into a woman’s face, just because he feels like it. John Ireland’s only slightly less sadistic killer is the only crook capable of needling Burr without incurring the wrath of his cigarette lighter. The most grotesque moment shows O’Keefe getting the upper hand in a brutal fight, by forcing Ireland’s face onto the sharp antlers of a mounted deer’s head. The shot makes one’s eyes itch. The graphic, explicit nature of the threat is stronger than most anything to date in Hollywood films — it’s intimate, and credible. The locations for the film were shot in and around Los Angeles, and up the California coast. But dialogue lines mention Washington State, and even cities in Colorado. Finished just around the same time for Eagle-Lion was Canon City, a jailbreak picture that took place in Colorado … could the editors have recycled some audio?

A relatively expensive show for Eagle-Lion, Raw Deal makes classy use of rear projection. Disguised by Alton’s fluid camerawork, scenic paintings substitute for location shots. Fog on standing studio sets helps with the budget while adding atmosphere, especially in a dank alley where we find out that a presumably dead bad guy is back to make more trouble.

Many Noirs of this period are soaked in political attitudes, but the Alton-Mann team had little to worry from blacklisters after their gung-ho patriotic “T-Men.” Screenwriter Leopold Atlas ran afoul of the HUAC anyway, as did Marsha Hunt, one of the most famous actresses affected by the blacklist. I found only one hint of politics in the film, in a dialogue line. In her protest speech describing how her family overcame adversity, Hunt’s Ann says that her old man ‘died in the War of the Depression.’ She says he didn’t get a Veteran’s Bonus from WW1, which explains why she uses the word ‘war.’ But I also think the writers may have meant ‘War of the Depression’ to refer to the social disaster as a Class War, not just an economic one.

ClassicFlix’s Blu-ray Special Edition of Raw Deal is a wonderful restoration that wipes away memories of fuzzy gray gray-market discs. The transfer records the nuances of John Alton’s artful cinematography as well as his bold strokes. We also appreciate the gauzy choker close-ups of his leading ladies, made even more radiant with star-filter highlights. The disc allows a fine examination of Alton’s techniques as discussed in his famous book (which I just read a couple of weeks ago, thanks to Allan Peach). He plays tricks with deep focus — note that the extra light keeping all three actors in focus in their stolen car, is so intense that Dennis O’Keefe’s left eye sometimes kicks back a bright highlight.

Alton’s talent extends to more than just fancy effects. In a gas station scene, note that one shot reveals a giant net scrim to cut down the background light — for a second the gas station seems enclosed within a giant screen door. The only other time that I’ve noticed that particular trick used is in another gas station scene in The Satan Bug.

Alton’s lighting is so well done that a nighttime campfire scene filmed on a studio interior with a painted scenery backing, looks like the real thing. Alton and Mann cut undetectably from the studio set to a real forest exterior with light (moonlight?) misting through the trees. Mann again intercuts shots on a real beach with rear-projection shots so well exposed and composed that the artifice is almost imperceptible.

With its wailing Theremin, Paul Sawtell’s eerie music comes across strong on the soundtrack. The only thing I noticed missing is its original Eagle-Lion logo, which the movie had when we saw it at the American Cinematheque around 1998. ClassicFlix’s opening text title says that they ‘acquired’ the source element, which inadvertently implies that they purchased it, rather than just borrowed it. ClassicFlix’s extras appear to have been produced at the same time as the company’s recent “T-Men” and He Walked by Night discs. Alan K. Rode of the Film Noir Foundation is the key commentator on the videos, joined by Twilight Time’s Julie Kirgo. The feature commentary is by author Jeremy Arnold, who hits us with all the known production info and offers extensive bios on the actors. Arnold also interprets the drama as one might in a literature class, explaining how the visuals support the character dynamics. The production history explains why Raw Deal is so much better than lower budget features from the non-majors: a lot of time was spent developing the script. The ‘original story’ was jettisoned in full, along with the original title ‘Corkscrew Alley.’

A new featurette brings the experts together for a making-of piece, and Max Alvarez contributes an excellent essay for a 23-page insert pamphlet, colorfully illustrated. Between the commentary, featurette and essay there’s a lot of repeated information. But another welcome video piece gives us Dennis O’Keefe’s son contributing to a bio of the multi-talented actor, who paid his dues as a bit player for years before reaching leading player status.

ClassicFlix offers some newly-edited promos, with text added to give the flavor of old trailers. The cover art is especially good. It’s taken from a foreign poster, naturally — the U.S. ad art looks a lot cheaper.