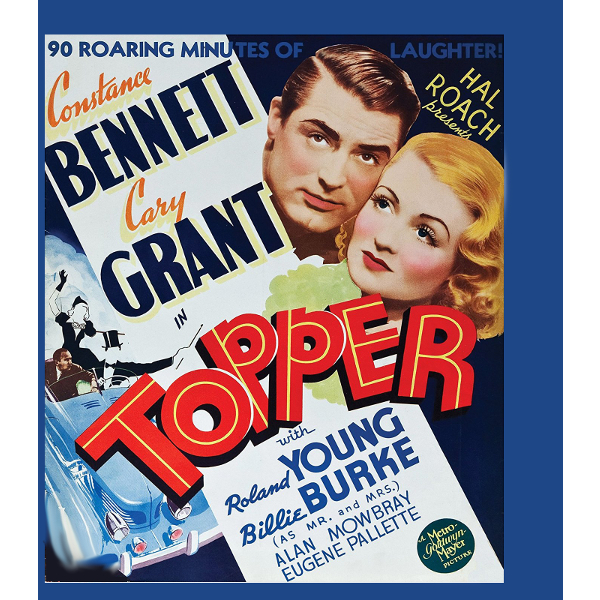 Topper was seemingly shown on TV non-stop when I was a kid, usually in so-so prints on a 14″ TV where one would strain to make out faces. But we enjoyed the silent movie gags with the invisibility tricks, and we recognized Cary Grant’s voice, not to mention the highly recognizable voice of one of the female stars. Before I knew much about anything, Topper made me think that once upon a time everybody in America wore formal clothes, lived in porcelain houses with white furniture, and drove cars that looked like streamlined torpedoes. The main car in Topper is seen so much that we expect it to get screen credit. It reminded us of the sleek cartoon car that the City Wolf drove in the cartoon Little Rural Riding Hood.

Many producers that had success in the 1920s fell by the wayside with the coming of sound, but Hal Roach kept the pot boiling with short subjects as long as he could. He also worked for MGM, which became his distributor. Roach hit big with the star-driven supernatural comedy Topper, from Thorne Smith, the author who would later provide the source for René Clair’s I Married a Witch. A definite screwball-inflected film blanc, Topper takes a no-worries attitude toward the Great Hereafter. Wealthy swells get to keep on behaving like mischievous children.

Poor Cosmo Topper (Roland Young) is crimped and corralled by his sweet but controlling and straight-laced wife, Clara (Billie Burke), who along with his fussy valet Wilkins (Alan Mowbray) has him on a schedule like a treadmill. Topper owns a big city bank yet yearns to break free of his bonds; even his staff makes fun of him. Enter the Kerbys, George and Marion (Cary Grant & Constance Bennett). As majority shareholders of the bank they live a life of carefree nonconformity, partying all night, driving George’s enormous roadster and teasing poor Cosmo to no end. But something gets in George’s eye just when a sharp curve comes up. He and Marion awaken by the side of the road and find that they’ve become ghosts. While liquidating the Kerbys’ assets, a momentarily rebellious Cosmo takes the repaired roadster out and runs off the road right where the Kerbys are still sitting, waiting to be summoned to the Great Beyond. Deciding that they need to do a good deed to enter heaven, they become a ghostly tag team, driving Cosmo nuts at work and in a hotel. Topper gets his name in the paper for brawling in the street over a ‘blonde,’ and the uncomprehending Clara is driven to tears when her husband reaches for a handkerchief and instead produces a pair of ladies’ silk underwear. As is wont to happen in screwball comedies, a public scandal and private indiscretions prove to be the magic that transforms Cosmo’s marriage for the better.

Sleek and smooth, Topper is not in the front rank of great ’30s comedies, yet it charmed audiences to no end. The ghostly invisibility of the Kerbys cues cleverly filmed special effect gags worthy of a silent movie, as when a car appears to change its own tire, or an unseen Marion causes a frilly undergarment to fly by itself across the salon of a lingerie store. Roland Young’s pantomime is quite good when he pretends to be half unconscious walking through rooms braced by the invisible Kerbys. The henpecked, mumbling Cosmo, a bank president with the ego of a door mouse, earned Young an Oscar nomination. It became his signature role despite being a star in fine comedy fare like The Ruggles of Red Gap and The Man Who Could Work Miracles. Nowadays Young’s appeal might be hard to grasp, but he was once considered the height of droll comic understatement. He at least wears better than many a performance by Charles Ruggles, his co-star in Red Gap.

Always ready with a provocative line, top-billed Constance Bennett is relaxed and svelte as Marion Kerby. The woman can do things like sleep overnight sitting up in car, and still look ready for a Hollywood red carpet appearance. She and George do the usual ’30s thing of drinking like fish and only becoming more charming; call it the Nick & Nora effect. Even among films blanc theirs is a completely un-traumatic death experience. Marion must be real monied aristocracy, for she takes becoming a see-through corpse the same way Grace Kelly might act if one of her Mediterranean villas burned down. “Now isn’t that interesting? We see none of the workings of the afterlife; Marion simply decides that some good deed doing is part of the celestial ‘moving on’ requirements.

Topper came along as Cary Grant was affecting a career shift, and he needed to play more than handsome rakes in serious dramas (such as the same year’s fairly deadly The Toast of New York). The comic Grant persona had shown up before, but here he plays a fellow who seemingly takes nothing seriously, not even highway death. Like a charming child, George is agreeable to most everything Marion wants. Although the Kerbys’ intervention in Cosmo’s affairs is nothing more than irresponsible meddling, it all plays as inspired frivolity that will magically lead to a happy result. I suppose the tension between the carefree absurdity and real life is what keeps Topper afloat. Director Norman McLeod stages everything wide and happy, as in a silent comedy. Even when the Kerbys enter a themed nightclub by sliding down a chute, the camera stays back, as in a Sennett or Roach short subject. The focus remains on Cosmo Topper’s predicament, aided by choice supporting players. Alan Mowbray is a particularly treacherous valet, always taking Clara’s side in Cosmo’s troubles; he’s inconsistently written to turn benign at the finish. But the portly Eugene Pallette is perfection as a flustered house detective, never overplaying his wonderful broad reactions as the patsy for the Kerby’s invisible tricks. Director McLeod is doing something right, for the tricks sustain all through the movie. In short subjects, gags with objects on wires and people pretending to be kicked usually grow stale in just a few minutes.

A musical interlude or two maintain the relaxed pace. Filmic musical friend Hoagy Carmichael makes his film debut, playing piano for George and Marion, closing up a club at 5am. Carmichael would later become an indelible presence in To Have and Have Not, The Best Yearsof Our Lives and Canyon Passage.

Of special note is actor Arthur Lake, who with his adenoidal voice was doomed to playing bellboys and elevator boys (to a ‘T’) until the Blondie series came along and provided him with a decade’s worth of good paychecks. McLeod and Roach populate the rest of the movie with smirking secretaries and a long list of un-credited bits, some by newcomers (Lana Turner) and several by Roach’s old-time associates from the silent years (Claire Windsor).

I think there was something about the Kerbys’ car that made us think Topper had to be something special. The impractical-looking thing looks more like a boat than a car, with enormous wheels and tires; it has a fin in the back that could be the rudder of an airplane. Little did we know that ostentatious cars like this one were something for movie stars to take out on the weekends, to look fabulous while getting drunk. After hitting the night spots, they would occasionally run over a pedestrian on the way home, necessitating a ‘help me’ call to Eddie Mannix. Like I say, we’re not talking High Cinema here. But as Obi-Wan would say, the nostalgia factor is strong in this one.

The biggest nostalgic ‘bump’ for Topper is still Billie Burke’s Clara. I think she was one of my earliest memories as an actor-spotter, with my sister explaining the connection to Glinda, the Good Witch of the East. I suppose it wouldn’t be easy being married to a woman whose voice sounds like a tinkly wind chime, but for ninety minutes Burke is a delight. The voice goes well with Clara’s Victorian manner, and its sweet tone keeps her from seeming an old bat that Cosmo should push under a train. Something about the voice is touching when Clara goes Wild like Theodora and acknowledges that marriage might be something racier than toast and jam at breakfast. It works, and that’s all that matters.

By never getting serious Topper completely sidesteps mawkishness; the oddball exit of Cosmo’s ghostly friends is just a matter-of-fact farewell. I haven’t seen either of the two sequels and will be curious to see how they keep the basic gag going, as it seems completely used up here. There was of course a TV show in the 1950s; I’ve only seen the episode with Robby the Robot. Is it fair to say that Topper was an inspiration for Tim Burton’s madcap Beetlejuice, even though the only similarity is a ghostly married couple? Geena Davis and Alec Baldwin don’t have the same carefree screwball attitude toward their extermination that George and Marion do, and their Halloween spook house hereafter is another can of worms entirely. VCI’s Blu-ray of Topper is a clean and sleek encoding of the crown jewel of Hal Roach’s big screen successes. It even includes an MGM logo, reminding us that Roach stayed with that distributor until changing over to United Artists. Part of the shakeup was due to Roach’s friendship and dealings with the Mussolinis. Yes, those Mussolinis, the Italian fascists. At one point in the late 1930s, Benito’s son took a tour of the Roach lot.

The show is clean and tidy, but also a tiny bit glassy, as if it had been hit pretty hard with a DVNR program. I noticed no artifacts or encoding goobers, but there’s also not much grain. On a 65″ monitor it seemed plenty sharp to me. The image is much better than the pictures I found to use for this review.