Bogart finds Bacall and movie history is made; for once the make-believe romantic chemistry is abundantly real. Howard Hawks’ wartime Caribbean adventure plays in grand style, with his patented mix of precision and casual cool. It’s one of the most entertaining pictures of the ‘forties. 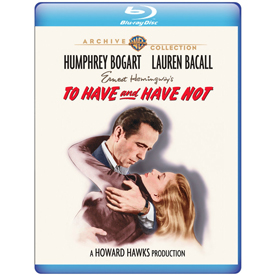 Speaking for myself, I can’t think of a more ‘Hawksian’ picture than To Have and Have Not. A perfect Hollywood adventure-romance in a topical (and tropical) setting, it revels in the feeling that we’re watching natural relationships play out in real time. Of course it’s as confected and carefully written as anything else, but Howard Hawks reportedly altered his scenes on the set, by the seat of his pants.  He probably wouldn’t call it improvisation, because he stayed fully in charge.  We’re told that many scene changes were developed right on the spot, no matter how long it took. Hawks wasn’t known for sticking to the production schedule, even when he was the producer. 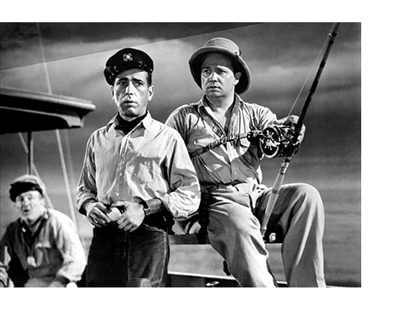 Something of a riff on the basic situation of Casablanca, the Jules Furthman / William Faulkner screenplay helps Bogie nail down his ‘soulful rogue’ character, and put all those one-note gangster villains behind him. Not as obsessed or as cagey as Rick Blaine, Harry Morgan takes things easy and stays loose. His convictions are completely personal — if Harry likes someone, he remains steadfastly loyal to them. The picture also a classic for Hollywood buffs who know about how its new star Lauren Bacall was cast, and her romance with Bogey. Their romantic sparring was echoed in their real lives off camera. Hollywood fantasies suffer when we find out that Clark Gable and Vivien Leigh or Bogie and Bergman were really just professionals feigning all the love stuff.  But here we can search the performances for eye-contact verification of how the movie star lovers really feel about each other.

Howard Hawks again sketches a man’s world where a laconic pro can stack his wits against dangerous personalities and politics and seldom bat an eye. There’s a lovable sidekick, colorful bit players with lovable nicknames and surly villains that talk big put are really pushovers for our charismatic hero. And don’t forget the Hawksian sing-a-longs! Here we have Hoagy Carmichael, a musical natural to make the Hollywood slickery go down even smoother. The film makes it seem as if Carmichael’s character Cricket composes his and Johnny Mercer’s “How Little We Know” on the spot, between barroom performances.

Life and work try to proceed normally in French-held Martinique, during the war. Adventurous fishing boat operator Harry Morgan (Humphrey Bogart) is stiffed for his pay when Vichy-Gaullist gunfire breaks out in a cafe, killing a client (Walter Sande) who owes him money. But two new interests come into his life: helping the Gaullist freedom fighters led by cafe owner Gerard (Marcel Dalio), and chasing the marooned adventuress and husky-voiced saloon hustler Marie Browning, otherwise known as ‘Slim’ (Lauren Bacall).

Everyone went to Ricks, but we also keep coming back to To Have and Have Not. Bogie hikes his pants up like a tough guy (he almost makes us think he isn’t a creampuff) and Bacall slinks around with a trampy-but-classy swagger that hasn’t dated in seventy years. Bogart is the star but it’s really Bacall’s picture. The nervy teenage model from New York got a new name (bye bye Betty Jean Perske) and a ticket to immortality by having the perfect look and the perfect voice. Older femme fatale types like Marlene Dietrich suddenly looked like your Aunt Bessie. Bacall’s peculiar sexy attitude was reportedly the result of coaching by Howard Hawks, a producer-director who enjoyed molding personalities for the screen — especially gorgeous women.

Bacall’s 19 year-old thin face was a collection of outsized features, with a mouth that seemed bigger than her jaw. When the cartoons lampooned her she was difficult to exaggerate, yet it all looked terrific. She doesn’t date because she combines an aura of class with a knowing, experience-filled look in her eyes — that can vanish to reveal her real age and honesty. Part of the fun of watching To Have and Have Not is seeing if the teenager will peek through the vamp act. Bacall’s screen persona has a transparency that reveals a person we like.

We’ve been told that the original plan was for Bacall’s Slim to share more screen time and romantic emphasis with Dolores Moran’s Madame de Bursac. The wife of a wounded resistance hero, de Bursac aligns fairly closely with Bergman’s Ilsa Lund from Casablanca.  She figures in a few key scenes, including one with Bogart that was surely written to be more romantic. There’s even some incidental dialogue from Marcel Dalio’s character that suggests that something is going on between those two. Moran lost the ingenue sweepstakes as soon as Hawks saw how effective Bacall was in dailies. Bacall’s character was given the big push, while Moran’s was put on the figurative Hollywood cable car to Palookaville. Yet Moran is still given major billing in the trailer. 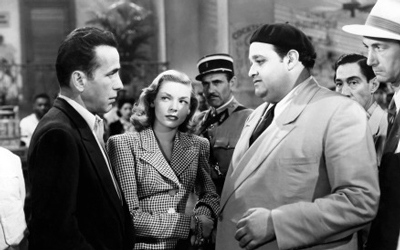 To Have and Have Not bears all of Howard Hawks’ strengths as a storyteller. The even flow of scenes downplays structure to emphasize his pleasant mood of adventure and manly-man camaraderie. Harry Morgan’s little fishing boat is not exactly glamorous, but we side with him unconditionally out of respect for his loyalty to his alcoholic sidekick Eddie (a defining role for Walter Brennan). Now of course, we think Harry would be a better pal if he helped Eddie dry out. In Hawks’ world a man must decide for himself when to get back on the wagon and reestablish his dignity. There must have been a lot more ignorant drunks around back then.

Hawks downplays the moral and political issues and lets Morgan decide his loyalties in his own good time. Morgan doesn’t lose sleep deciding to help the good guys, that’s just that kind of self-sacrificing guy he is. Again, Hawks’ manly-man world is a fantasy too attractive not to like, even if the Vichy collaborators Harry opposes are far too easily overcome. The only writing weakness that I notice is that Marcel Dalio’s Frenchy’s sole function is to show up every four minutes to beg Harry to help him, or to confront him with more desperate resistance refugees. It’s always when the story flow needs goosing, almost like someone saying ‘Surf’s Up!’ in a beach party movie. 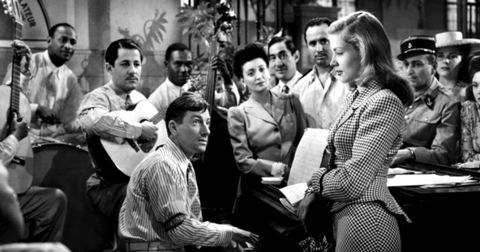 Audiences adored the atmosphere of saloons and cigarette smoke where attractive types like Bogie and Bacall stayed witty and sexy no matter how much they drank. Bogie’s Morgan is a professional who respects Slim’s status as a pro player in her own league — she’s an orphan in the woods who gets by, by scamming for drinks and favors. What little character tension exists comes when Morgan accepts her independent Hays-Code-tamed promiscuity for what it is. Silm would rather he show a little more jealousy or possessiveness. The Hawks world of female equality hides his repeated assertion that modern woman’s posture of independence is yet another clever bid to hook a man.

It’s a fantasy. It works well, and makes plot a secondary concern. The best thing to be said for Howard Hawks movies is that they work as movies and not literature with themes to promote. To Have and Have Not is a relaxing and entertaining ride. Better than that, it’s a key Hawks movie that breaks ground instead of repeating themes as he did later in his career. So-called ‘classics’ from Rio Bravo on recycle bits and ideas as if the director had nothing more to give. For that matter, Hawks was prone to repeat himself even earlier — compare Bogie’s hand-trembling behavior after a gun-down (“See how close you came?”) to Montgomery Clift’s, Ricky Nelson’s and even James Caan’s identical schtick in much later films. These older pictures are sometimes considered fossils, but when Hawks really cooked, titles like Only Angels Have Wings and Air Force were the height of masculinity for earlier generations.

Now, somebody please explain to me exactly what the title “To Have and Have Not” means. 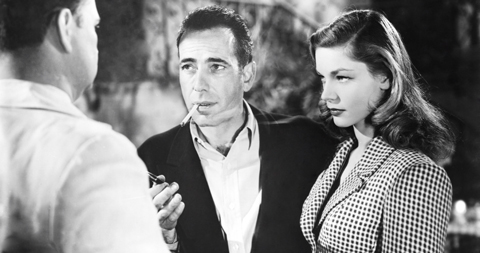 The good news is that the Warner Archive Collection’s Blu-ray of To Have and Have Not is everything we want it to be. Old 16mm prints of this title often looked beat-up, and even the 2003 DVD had scratches and some instability. This Blu is rock solid with a flawless visual surface that flatters the smooth cinematography of Sid Hickox. I’m not sure how many scenes were actually filmed outdoors, but most if not all of the Martinique port set appears to be a large interior set. A cyclorama lends the illusion of a large body of water. It’s really excellent.

The audio is also a big improvement, giving Carmichael’s musical breaks a major boost. Bacall’s voice sounds impossibly low and ‘croaky,’ but it’s apparently her own… it’s been established that she was not dubbed by a young Andy Williams.

The disc carries over the extras of the old DVD. A brief overview featurette on the basic facts of To Have and Have Not is present, as is a Lux radio reprise of the story that speeds things up considerably. The original trailer sells the movie as an action blockbuster, carefully choosing every gunshot, punch, push, shove and twitchy body movement in the movie to make its case. The WB cartoon Bacall to Arms, with its star caricatures, is present as well.

Was Hollywood more aware and respectful of Val Lewton than I thought they were? Actors Sir Lancelot, Chef Milani and Marguerita Sylva have been transplanted from Lewton’s The Seventh Victim and I Walked with a Zombie for bits in To Have and Have Not.

Hemingway’s basic story has been remade and reimagined several times. 1950’s excellent The Breaking Point makes the Morgan character a working stiff up against economic problems, and seems a critique of America that didn’t help star John Garfield’s political problems. Audie Murphy and Don Siegel did a pretty weak version in 1957 called The Gun Runners. 1976’s Islands in the Stream is a soggy ode to Hemingway with George C Scott. The useless rummy character in that one is played by David Hemmings, who proves his mettle by saving Scott’s kids — shooting a killer shark with a Browning B.A.R. rifle. It not only explains Scott’s loyalty to the drunkard, but provides a nice coda to the Jaws phenomenon: take that, Bruce.