Radical changes were required to adapt Lillian Hellman’s Broadway play for post-Code Hollywood, to eradicate a theme that in 1934 was entirely taboo. But were audiences really unaware of the subject matter switch?  William Wyler excels with this bowdlerized, yet curiously near-perfect, story about the power of scandal. 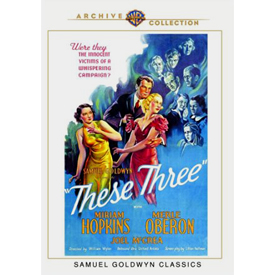 William Wyler directed half a decade’s worth of silent westerns before his big break came. From that point on he made high profile dramas, almost all of which are excellent movies. 1936’s These Three is as high profile as a movie could be in the 1930s. It has remained near the center of a discussion that’s never really stopped, about film adaptations of controversial material, about censorship and self-censorship, and about the curious habit that some Hollywood properties have of not being made right, even when a later remake presents the opportunity. 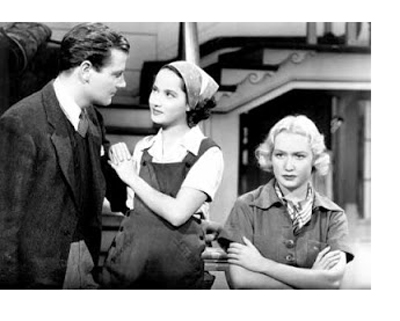 Fred Zinnemann’s 1977 Julia dramatizes Lillian Hellman’s struggle to write her first play.  Jane Fonda types furiously away out in some romantic beach house with her mentor Dashiell Hammett. The Children’s Hour was the play; it became producer Sam Goldwyn’s These Three in 1936. The big surprise, or non-surprise, is that the play’s daring theme had to be jettisoned for the screen: Hellman traces the effects of malicious gossip when two private school teachers are accused of being lesbians. The shadow existence of homosexuality could be sneakily implied in Hollywood movies but never fronted as a theme or tangent subject. William Wyler’s movie is beautifully made in every respect. Lillian Hellman herself did the adaptation; because her play restricted the ‘shocking’ content to unheard whispers, relatively few dialogue changes were necessary. The movie is a key case of a controversial play shorn of its controversial content. Not only is a death avoided, the show affects a happy romantic ending.

College graduates Martha Dobie (Miriam Hopkins) and Karen Wright (Merle Oberon) found a girl’s boarding school with the help of local doctor Joe Cardin (Joel McCrea). Karen and Joe soon pair off, which leaves Martha less than happy: she loves him too, but says nothing. All goes reasonably well until Martha’s aunt, traveling actress Lily Mortar (Catharine Doucet) shows up. A selfish and stupid woman, Lily insists on serving as the school’s elocution teacher, drawing a salary and doing little to no work. Lily’s bad judgment and big mouth prove poisonous when student Mary Tilford (Bonita Granville) becomes a problem. The spoiled and malicious Mary easily manipulates Lily, and when caught in lies uses more lies, screaming tantrums and even a fainting spell to get her way. Martha and Karen prove too smart to be fooled, so Mary attacks them with a game-changing accusation. Backed up by testimony she extorts from an easily terrorized fellow student, Mary makes her influential Grandmother Amelia Tilford (Alma Kruger) believe that Joe, who is engaged to Karen, is carrying on an illicit affair with Martha after hours. The school is destroyed in a barrage of gossip and ruined reputations. 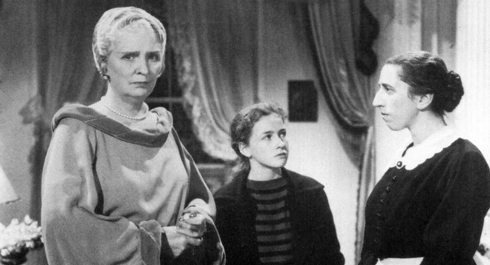 As was Wyler’s trademark the performances are impeccable, giving us a sensitive ‘read’ of the material. Oberon’s Karen and Hopkins’ Martha do seem very fond of each other, as they naturally make decisions that maintain their close association. Karen is too focused to really think out the relationship, while Martha suffers on the side. Social forces are all-powerful, especially in this small town setting. Three attractive people like this trio would surely become the focus of at least a little idle gossip, borne perhaps of jealousy. Instead they fall into a perfect storm of scandal. The accusations of a single malicious girl blow their lives to bits.

Lillian Hellman is quoted as saying she didn’t mind the censorship subject switch, because her play is about the evil of lies and innuendo. With the imperious Amelia Tilford standing in judgment it wouldn’t take something as taboo as lesbianism to wipe out the Wright-Dobie school; a simple charge of alcoholism or minor child endangerment would do. Today the accusation would almost certainly be child molestation. If they have any brains at all, today’s childcare professionals, teachers, counselors and sports coaches make it a rule never to be fully alone with a student. 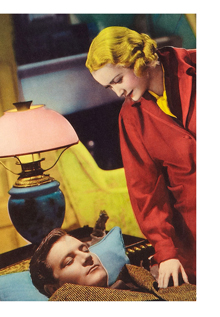 These Three is a rewarding drama with fascinating characterizations we can all recognize: the idealistic beauty who is a little blind to the darker forces at work around her; the insecure ‘best friend’ convinced that she’s unattractive; the lamprey-like manipulating relative that seeks to rearrange the world to suit her convenience. Joel McCrea’s steadfast doctor is as blind as Karen is to the potential trouble with, ‘what the neighbors might think.’ Prudence is a drag, but given the high reputation a girl’s school must maintain, most of Joe’s calls should have been for business only, and never after hours.

Martha and Karen mean well, but they’re not in control of their school. Wyler pulls some amazing performances from his cast of little girls, whose attitudes are influenced by the example of their teachers. Lily Mortar is a clueless idiot who encourages the malice of a little monster like Mary Tilford. Hellmann’s social worldview makes a few statements about the power of socially prominent people like Mrs. Tilford. The old lady is also something of a nitwit, a pushover for her near-demonic granddaughter.

Frankly, a good case can be made for These Three as a study of disagreeable women of all ages.

Bonita Granville is of course excellent as the intolerable Mary, a character conceived in the years preceding the popularization of child psychology. Most obnoxious and maladjusted kids do grow out of their awfulness, or at least learn to better conceal their inner problems. These Three sees Mary Tilford as simply a bad seed, like the later Patty McCormack, a holy monster who needs to be hit by a bolt of lighting, or to have a stake driven through her heart. There’s no gray area here; the way Mary tortures her friend Rosalie, one would think she were getting her deportment lessons from the Devil Incarnate. To comfort audiences made uneasy, the movie gives us the wonderful Margaret Hamilton as the Tilford maid, the only character who sees through Mary’s insincerity. In reality, a killer like Mary will walk away from the destruction she’s caused, and perhaps think nothing of it. Wyler and Hellman let the future Wicked Witch of the West carry out a summary execution on the Tilford staircase — the favored location for the most important conflicts in Wyler movies.

Today we watch These Three wishing that our three friends could form whatever floating three-way friendship-romance works for them. Perhaps Martha will get sick of being a third wheel, or Karen is just too conservative, but they’re nice enough to deserve a happy ending. Hellman and Wyler take a rather extreme step at the finish, having Dr. Cardin relocate to Vienna, as opposed to simply the next state. Is the inference that America is a backward place of small-minded morons, and Karen and Joe will find Europe more to their liking? And what of poor Martha? Her fate is to make a noble speech and then disappear, to go to that place where Offenders of The Greater Law must retreat. 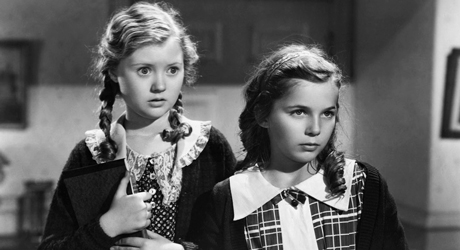 These Three does offer a vivid autopsy of gossip and the soul-killing doubt it sows — few of us do well when judged in a social situation we can’t control. Two good examples of similarly themed films come to mind. H.G. Clouzot’s Le Corbeau, filmed during the Nazi occupation of France, makes a chilling statement about the harm that a poison pen letter writer causes in a small town. It’s a political allegory but also a prime statement of basic Clouzot misanthropy.  John Patrick Shanley’s excellent 2008 Doubt envisions Meryl Streep and Philip Seymour Hoffman as professionals in a Catholic school beset by rumors of child molestation. In The Children’s Hour/These Three, it’s not so much gossip that undoes our heroines, but concentrated social power. Alma Kruger’s Mrs. Tilford is forever standing erect, like a carved figurehead on the bow of a ship. Should she decide that you’re bad news, your social & economic viability is immediately forfeit. That goes double for her little Magaera Mary, a poisonous daughter of privilege.

William Wyler chose to remake These Three in 1961 under Hellman’s original title The Children’s Hour. It’s not one of his best pictures, but not because the material is dated. John Michael Hayes restores Lillian Hellman’s original theme, but it’s not enough. Rather than come to the defense of cruelly closeted gay relationships, the movie continues to regard the subject as an Evil that Cannot Speak Its Name. Audrey Hepburn’s virtuous Karen is even more myopic than was Merle Oberon. Miriam Hopkins had spirit and strength, but Shirley MacLaine’s Martha is a sad little lump, feeling sorry for herself as she slips further into isolation and psychological doom. A good comparison might be made with Julie Harris’ Eleanor in the 1963 The Haunting — the pathetic Eleanor is a psychological defective, the Little Duckling that Hasn’t a Chance. Both the horror movie and Wyler’s remake still classify even borderline lesbians as regrettable mistakes of nature.

To my thinking, the bowdlerized original These Three is superior. It’s not difficult to interpret Martha Dobie as being in love with both Karen and Joe, and her commitment to Karen is strong, with or without an overt sexual relationship. The 1936 movie at least presents the possibility that people with uncertain sexual feelings might find understanding and even encouragement… even if I’m reading more into the idealism of its characters than I should. The first bit of trivia learned about these movies is the fact that Miriam Hopkins returned 25 years later to play the role of the horrible Aunt Lily. We instead imagine a modern, ‘different’ version of Hopkins’ Design for Living, where people can gravitate to whatever kind of socio-family unit their hearts desire. The batting average for happiness can’t be any worse than the traditional patterns. And who takes care of the children in this free-love utopia, you ask? Aw, send ’em all to boarding schools.

The Warner Archive Collection DVD-R of These Three is a solid encoding of this ’30s classic that comes with a lot of baggage — the remake, the highly debatable handing of its subject matter. I really like the photographic style of Gregg Toland, whose interior rooms do indeed often have full ceilings. Around 1936 new, much superior B&W film stocks were introduced; These Three has a different look than, say, The Good Fairy of just the year before. Toland carries some trick filters in his camera bag: sunny exterior two-shots render the background slightly soft, with twinkling highlights — a perfect stylization for potentially romantic meetings. Modern movies are almost always well-filmed… but aren’t always well imaged.

The disc has no English subtitles, which made me worry a bit early on when Alfred Newman’s background music came close to overpowering the dialogue. It soon corrects itself. This time around I noticed Walter Brennan in his bit as a mulish country taxi driver… he looks ancient but is only 42 years old. Also, the opening scene was indeed filmed on the Royce Hall quad at UCLA — you can see the trees far off in the morning haze, where my dorm Sproul Hall would be built years later. Oberon and Hopkins graduate on the very spot where, in 1971, I watched student demonstrators clash with Reagan’s police while protesting the invasion of Cambodia. Relevant? Not really.