One of the best-remembered dramas of the ’70s gives us controversial actresses, a lavish production and a story by the even more controversial Lillian Hellman. Director Fred Zinnemann makes it into a suspenseful, deeply affecting experience. 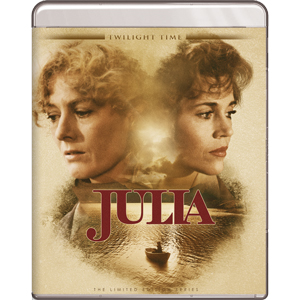 Fred Zinnemann was a cinema activist from way back, a filmmaker of uncompromising convictions. His most frequent theme is anti-fascism, although he began with a very Soviet-styled pro-union film in Mexico, Redes. Zinnemann’s The Search is perhaps the most compassionate movies about the turmoil of displaced persons after the war, and his The Nun’s Story remains the most thoughtful picture of its kind as well. The interesting thing about Zinnemann is that many of his so-called political films were just as popular as his more obviously commercial films. He never seemed on the attack, but won his reputation for always being on the right side. When an element of the Director’s Guild tried to instigate a loyalty oath, Cecil B. DeMille complained that the Guild was overrun with a lot of foreigners with shady foreign names… sarcastically reciting a few offensive ones: Wyler and Wilder (pronounced ‘Viler’ and ‘Vilder’), and Zinnemann (pronounced ‘Zinne-mann’). When the blacklist hit the German-born director had a clean record: the witch hunters couldn’t touch him. 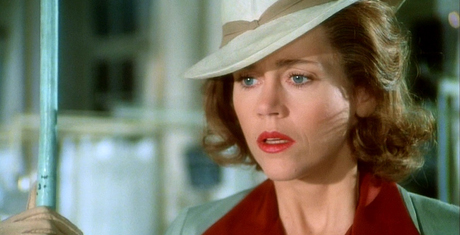 Julia had plenty of interest in 1977, beginning with its two star performances, then with the stars’ political reputations, and then with the highbrow controversy of its source author Lillian Hellmann. A firebrand leftist writer from high society of a different age, Hellman had great success on stage and some winners on film, notably William Wyler’s great The Little Foxes. The big blow-up for her came with Arthur Penn’s The Chase, an all-star Marlon Brando catastrophe that she adapted from a book by Horton Foote. It’s one of the most entertaining miscalculations ever to come out of Hollywood, but also one reviewed almost exclusively for its politics.

A Hellman short story from her collection Pentimento is the basis for Julia, which is supposed to have been taken from the author’s personal experience. The time frame skips quite nimbly between four distinct situations, anchored by a narration-memoir told from a postwar viewpoint. Back in the 1920s, schoolgirl Lillian Hellman (Susan Jones) is best friends with Julia (Lisa Pelikan), a rich New Yorker who rarely sees her playgirl mother and lives with her conservative elder grandparents. Lillian is taken by Julia’s spark of social conscience, and her unbridled optimism. Julia leaves for medical school in Oxford. Later in the 1930s, Lillian (now Jane Fonda) is living with retired author Dashiel Hammett (Jason Robards) and is struggling to write a play under his tutelage. She has visited Julia (now Vanessa Redgrave) once at Oxford but now knows that Julia is in Vienna and working in the anti-Nazi underground. Another visit finds Julia in a hospital, almost beaten to death in a student uprising. Even later, Lillian is vacationing in Paris and planning to attend a theater festival in Moscow. Through intermediaries, Julia asks her to undertake a perilous mission that involves a rail detour through Berlin. It’s unwise, for no other reason than Lillian is Jewish and the Germans are so suspicious and unpredictable. But Lillian will do anything for her friend. 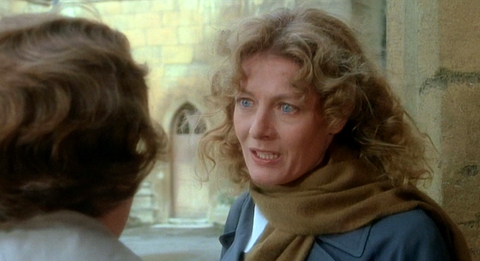 Considering that its narrative is so fragmented, Julia has a terrific impact. Jane Fonda is not bad as a talented, privileged young woman enchanted by her firebrand of a girlfriend, who isn’t afraid to wade into a political fight and gets herself maimed for her troubles. Vanessa Redgrave achieves her character by maintaining a breathless, inspired look at all times. Their few scenes together were enough to win Redgrave a supporting Actress Oscar. Jason Robards won as well, for almost as small of a part. Ms. Fonda is the one on screen the most, wearing great period costumes in some of the most attractive settings of any film of the 1970s. Her Hellmann is a screaming elitist who nevertheless reserves a mountain of bile for the privileged rich. We don’t really see Lillian’s family and there’s no love set aside for her friends. Social vipers her own age (Meryl Streep, John Glover) wallow in their snide observations and dirty-minded insinuations, and can’t for the life of them imagine what insanity Julia could be engaging in over in Germany. Julia has a social conscience, and only Lillian can appreciate it.

As if that’s not enough, Lillian’s close friends and traveling companions are presented as ugly Americans abroad. Dottie (apparently Dorothy Parker, played by Rosemary Murphy) leaves a champagne glass out in the street, as if expecting a servant to pick up after her. Her husband Alan (Hal Holbrook) is a boor who intrudes on Lillian’s privacy and almost scotches her secret mission. Julia’s ultra-rich relatives turn out to be political monsters that love the idea of gobbling up Julia’s fortune. 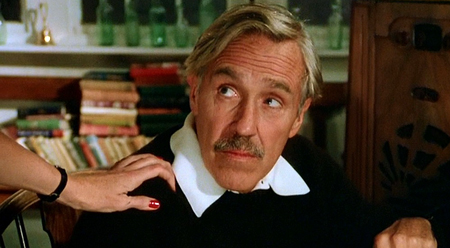 The glamour does get to be a bit much, even if it is true to the lifestyles of these anointed folk. Helping to humanize Lillian is her relationship with ‘Dash,’ all of which plays out at a to-die-for beach house. Fonda is again good with the film’s weaker material. Even Zinnemann can’t make the ‘struggling’ writer scenes more convincing — Lillian pouts, smokes, drinks, crumples up paper and even throws her typewriter out the window, but it’s still no better than Dr. Zhivago watching ice crystals turn into flowers while the music does the work. Lillian’s ‘troubled but healthy’ relationship with Hammett also seems an artistic match made in heaven, especially for the ambitious Lillian.

Helped by the impressive production, Zinnemann makes Lillian’s secret mission into a perfect, sustained set piece. The hungry, polite Johann (Maximillian Schell) is the first of several contacts that help Lillian smuggle essential contraband into Germany. Every passport check and customs interrogation is a trial, with Lillian barely able to hold herself together or follow the simplest instructions. At the center of her trip she gets to see Julia once again, in a heartrending scene in a restaurant adjacent to the Berlin railroad station. When I first saw the film in 1977, this scene was spellbinding — we didn’t know what would happen. From this point on, the rest of the film plays as one regrettable event after another, lost to time and memory. 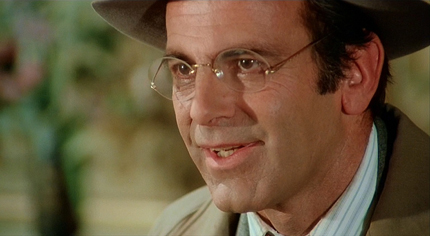 Fred Zinnemann keeps the film all of a piece, and the individual scenes are quite vivid. The incredibly ornate locations and restorations — sometimes just for a few seconds of film — overcome our resistance to the period setting. An entire New York restaurant (Sardi’s?) is recreated for Lillian’s post-premiere reception for her The Children’s Hour. Moscow is represented only by a bit of Hamlet on a stage and a hotel lobby with an unpleasant attendant. Hammett’s beach house is a number of carefully filmed beach exteriors. But that train journey is one of the better sequences of its kind. The two German women that help her on the train (Dora Doll & Elisabeth Mortenson) are difficult to forget… imagine Hitchcock’s train trip in The Lady Vanishes, except in non-escapist mode, in deadly earnest.

Julia was expected to become a political soap box come Oscar time, as some winners were beginning to make fiery position speeches for their favorite causes. Vanessa Redgrave did just that for her acceptance speech. More damaging to Lillian Hellman’s reputation, but not her writing or the movie, was the later revelation that the ‘true story’ touted on the Julia posters was anything but. The controversy was fueled by a personal grudge between Hellman and author Mary McCarthy, which doesn’t help to establish facts. The last time I looked, Wikipedia’s entry for the movie had a fairly concise and unbiased account of the feud over truthfulness. 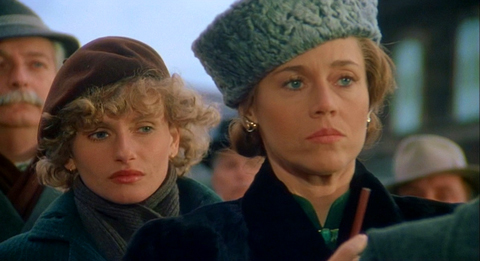 The Twilight Time Blu-ray of Julia is a visual killer, a gorgeous encoding of an excellent scan by Fox. Even the bookended scenes of the silhouette of the aged Hellman in a boat are appropriately dark and dank (although we really have a hard time believing that Hellman/Fonda would entertain herself that way). Georges Delerue’s music score is barely noticed, so that we only remember his contribution when the music suddenly arrives at the end titles. Cameraman Douglas Slocombe’s work is flawless. Paris looks captivating, while the town square filling in for Berlin is appropriately forbidding. And Fonda was fortunate to be so well clothed by Anthea Sylbert. Julia was nominated in a lot of categories, but lost out in many to Annie Hall, Close Encounters of the Third Kind and Star Wars.

A trailer is included. The main extra is an excellent commentary with Twilight Time’s Nick Redman engaging actress Jane Fonda in a full discussion of the film. He’s prepared, the questions and follow-ups are deftly posed, and Ms. Fonda responds with thoughtful answers. It’s a top-rank track; Jane seems quite candid and honest.

Julie Kirgo’s liner notes strike a balance between the film’s many points of interest — Zinnemann, the controversial actresses, and the problematic Lillian Hellman.