Roald Dahl’s marvelous horror thriller for children (the ones ready for it) knows exactly what it is and doesn’t soft-pedal the scary stuff. Horrible (but sexy) witches plot the wholesale destruction of Hansels and Gretels everywhere, and the only kid that can stop them has been changed into a mouse. Nicolas Roeg runs wild with Dahl’s imaginative, refreshingly un-PC book; the usual softening touches are skipped in favor of unadulterated scarifying FUN. It couldn’t be better directed; we wish that Roeg had been able to create a dozen such outrageous fantasies. Star Anjelica Huston is an amazing Grand High Witch, with Mai Zetterling, Anne Lambton and Jane Horrocks providing able witchy support. Recommended! 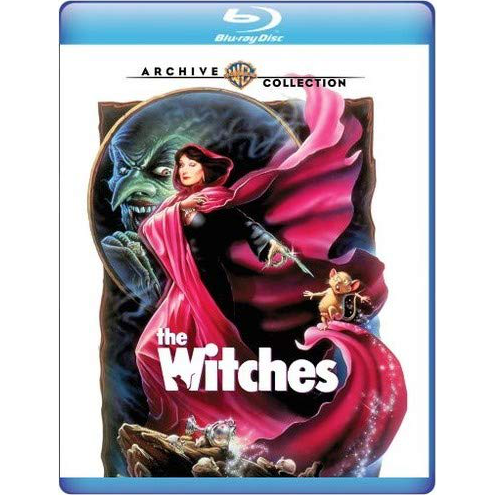 A Wikipedia article states that Robert Zemeckis may be working on a remake of Roald Dahl’s book The Witches. Nicolas Roeg’s incomparable 1990 version is already everything the story wants to be. Can a ‘children’s’ film be genuinely scary and disturbing?  Can kids handle it?  I say let the ankle-biters fend for themselves, for I wouldn’t change a frame in this delightfully disturbing marvel of a movie. It’s as magical and light-spirited as The Princess Bride except that the subject isn’t goodness and light.

In this Year of The Woman, can we expect an essay decrying the the whole project as an exercise in undiluted misogyny?  Of course it is!  Witches have been undergoing a romantic image overhaul for roughly fifty years, but Dahl’s original story resets the dial back to EVIL, even if the overt Satanic connotations have been set aside. Yeah, I’d not show it to children likely to be freaked out by bizarre transformations, or likely to be disturbed by the tale’s malign, murderous women. But most any kid with an imagination will be transported by the witchy conspiracy that aims to eradicate children from the face of the Earth!

We’re told that Dahl’s book The Witches has a history of challenges by school conservatives, as being unsuitable for children. Was there ever a more positive testimonial? I have to say that the women in The Witches are just too fascinating for us not to enjoy their spirited revelry. Besides the spectacular Anjelica Huston, there’s a full gallery of eccentric ladies that can’t wait to reveal themselves as horrid monsters. Among them are some real charmers, too, such as Jenny Runacre and Jane Horrocks. Adult males don’t count for much, although Rowan Atkinson, Bill Paterson and Jim Carter acquit themselves well enough. The excellence of Nicolas Roeg’s filmmaking is what makes it all work. The maker of Performance, Walkabout, Don’t Look Now, The Man Who Fell to Earth, Bad Timing, and Insignificance knows how to play clever games with his camera. Every moment in this show is arresting.

Dahl’s basic story could have come from the margins of Häxan, minus the twisted psychology of Protestant witch-burning. American boy Luke (Jasen Fisher) loses his parents in Norway, and his Norwegian grandmother Helga (Mai Zetterling) takes him in charge. Their favorite subject is witches, as Helga is convinced that they exist, and tells Luke how to spot them and the strange rules of their behavior — mainly that they like to kill children. Resettled in England, Luke and Helga take a rest (Helga has become diabetic) at a seaside hotel hosting a strange convention. The Royal Society for the Prevention of Cruelty to Children is a front for an international band of witches led by Miss Ernst, in reality The Grand High Witch (Anjelica Huston). Helga is mostly restricted to her room, but Luke manages to crash the secret, locked-doors convention meeting, where Miss Ernst and her mob of witches remove their attractive disguises. The monstrous Grand High Witch lays out a plan for destroying the children of America — by using candy-store fronts to slip millions of children an elixir that will turn them into mice. Luke is caught and turned into a mouse, but with Helga’s help he goes on a perilous mouse-mission, to defeat the witches during the dinner hour.

The Witches pulls no punches from the beginning; it’s a paranoid fantasy for pre-teens. Evil child-killing women are everywhere. Grandma Helga tells the macabre story of a kidnapped girl whose soul remains trapped in a painting. That segment alone is more chilling than ten episodes of One Step Beyond, but Dahl and Roeg soon surround Luke with a full-on horde of fiendish creatures, in grotesquely ugly makeups. Anjelica Huston had by this time earned her stardom with a succession of terrific film portrayals, in Prizzi’s Honor, Gardens of Stone, The Dead, and Crimes and Misdemeanors; her great work would continue in The Grifters and The Addams Family. Huston’s Miss Ernst is a bundle of nastiness, even in her ‘charming’ human version, a patronizing German who can barely disguise her contempt for almost everything. Talk about purity of emotions: Miss Ernst revels in her fiendishness to a degree that would cause Boris Karloff and Bela Lugosi to burst with pride. The kid-story format has echoes of author Dahl’s Charlie and the Chocolate Factory. Luke and a gluttonous second boy Bruno (Charile Potter) are quite frighteningly changed into mice, transformations that are fairly traumatic, like the horrors of Pleasure Island in Pinocchio. Luke can still talk, and takes his new rodent identity in stride. Helga has little trouble adjusting, but Bruno’s parents (Bill Paterson and Brenda Blethyn) have a harder time accepting the obvious — as a mouse, little Bruno is just as dimwitted as when he was human.

This may be ‘The Curse of the Weremouse,’ but being turned into mice doesn’t slow down the boys’ effort to foil the witch conspiracy. As this is partly a Jim Henson production, excellent puppetry and terrific live-mouse macro photography make Luke’s adventures scooting across carpets and invading the kitchen and the dinner salon, into the best scenes of their kind. The show earns its PG rating by following the sometimes- gory rules of original, uncensored fairy tales. Luke even loses part of his tail to a chef’s carving knife. So much for watered-down family-values children’s entertainment. I think the younger, more daring Walt Disney would approve.

The consistently cockeyed tone of this show keeps us off balance, and smiling. Helping out with the light approach is a very good appearance by Rowan Atkinson as the hotel manager Mr. Stringer, a fussy fool desperate to keep up appearances while taking time out for hanky-panky with one of his maids. And those &%@* witches are everywhere, even on his kitchen staff. Is everybody overacting?  Yes, and marvelously so. Anjelica Huston can barely contain her Pure, Unadulterated Evil. The assembled witches, tricked out in snaggle-teeth, purple-tinted eyes and foam rubber deformities, are jarringly deranged. The undoing of this conclave of jolly fiends is crazy and chaotic.

Roald Dahl’s bold original story does not have Luke —- well, that’s too big a surprise to ruin. After going over the top with grotesque scenes of monster transformations, director Roeg apparently trimmed a number of images deemed too disturbing. But the completed film also altered Dahl’s finale. Not from the book is Miss Ernst’s put-upon secretary, Miss Irvine (Jane Horrocks), who is so badly treated that she quits and takes the Glinda Pledge. That paves the way for an ending slightly more conventional than Roald’s original, in which CCAF (Certain Consequences are Final). Hm… we’re reminded of Ms. Horrocks’ terrific performance in Mike Leigh’s Life is Sweet. The main aberration of her unconventional young woman in that show is also related to chocolate. 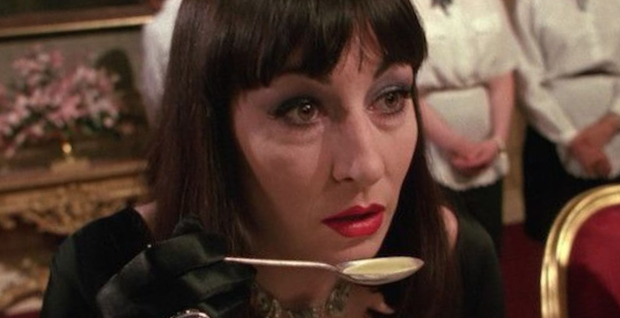 Nicolas Roeg’s finish does suggest that the Grand High Witch simply forgot rule number one of Evil conspiracies: if you’re going to run a nasty organization to murder children, treat the help better. Roald Dahl was reportedly infuriated that his witches would be compromised by potential atonement. Personally, I think the movie is dazzling, and the altered ending at least gives it a chance at commercial appeal: I can readily envision walkouts and bad word of mouth from parents foolish enough to take pre-schoolers to something called The Witches. I remember seeing the 1985 The NeverEnding Story in a matinee packed with tots whose parents breathed a sigh of relief when the dark tone finally turned positive at the conclusion. Some of them likely still thought NeverEnding Story too morose.

All that leads us to remember that director Roeg never made films that fit comfortably in mainstream categories. The Witches is really a picture for adults, not babysitting filler for a matinee. But I’ll bet that plenty of kids would love it.

Nicolas Roeg loved to make women look beautiful, and his witches are no exception. Stylish Anne Lambton is the maniac who tries to lure Luke down from a treehouse with a bar of chocolate. Jane Horrocks provides a helpful contrast for the conclusion — she and the comforting, sickly-but-principled Mai Zetterling remind us that all women are not EVIL. Several fiendish monstrosities in the crowd are incredibly beautiful-horrid, bitch-witches with terrific personalities — what a giant makeup job that must have been. Your average vampire and zombie hordes pale into insignificance; only Ken Russell occasionally hit the same heights, and he was usually ‘R’-rated.

Odd note — the little plastic house where mouse-Luke resides at the finale, appears to be a commercial toy I bought for my kids, a plastic Ghostbusters firehouse. I just looked at one online, and maybe I’m mistaken .. was it some kind of Ninja Turtles house?   I still can’t bear to part with their TMNT ‘Technodrome’ battle dome toy — Chris Groban’s parents gave that expensive item to my son Daniel for his birthday around 1990. The Warner Archive Collection Blu-ray of The Witches will make one forget blah TV broadcasts and old full frame VHS copies. Nicolas Roeg’s camera never stays still, and the widescreen framing makes all of those unusual wide-view angles look even more dynamic. Stanley Myers’ emphatic music score comes across handsomely — but it also makes a good haunting use of Dies Irae, as every self-respecting witchcraft picture has done since Dreyer’s Day of Wrath.

The only extra is a trailer, which presents the show fairly — and likely kept away parents looking for kiddie fare. For a few seconds I thought the trailer was going to refrain from showing Anjelica Huston’s outrageously grotesque makeup … but no, it’s there!