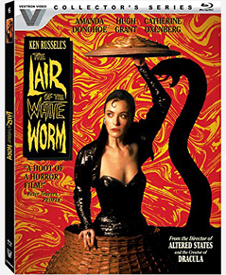 Wild man director Ken Russell struck back against commercial indifference with this alternately elegant and outrageous horror offering, that excepting a few hard- ‘R’ moments, comes off as a real (snake) charmer. Few horror movies have a real sense of wit, and fewer still can laugh at themselves without crumbling into sad parody. As if reclaiming horror as a British-made product, Russell’s The Lair of the White Worm shows us what a next-generation Hammer Film could have been were a creative writer-director at the helm. Even better is Russell’s cast, with a fresh-faced Hugh Grant leading a foursome of personable Scots youngsters, and a terrific performance from Amanda Donohoe that defines the term fearless. Studios feared Ken Russell as a madman capable of pushing his films to crazy extremes, especially when attacking sacred cows like religion. Donohoe so completely embodies Russell’s concept of a lusty pagan vampire-serpent, the two of them must have harmonized on some level of uninhibited creativity. 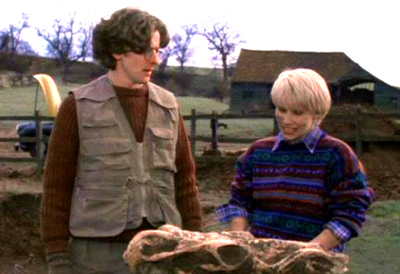 Ken Russell worked from an original story by Dracula creator Bram Stoker. Russell finds the iconography of ancient curses a fine jumping-off point for a happily high-spirited horror yarn, where even the victims seem to be having a good time. The discovery of a mysterious artifact, in this case an inexplicable distorted skull, aligns the show toward other stories about talismans with satanic power, or perhaps vestiges of Lovecraftian horror-gods waiting for an opportunity to reclaim the Earth. Events in Russell’s script are pitched at a black-comedy level of good humor, and inhabited by characters too good-natured to allow things to become too cynical or cruel. Even the vicious monster woman has a wickedly agreeable sense of decorum.

Scots archaeologist Angus Flint (Peter Capaldi) is a welcome guest at the Mercy Farm Bed & Breakfast, where the Trent sisters Mary and Eve (Sammi Davis & Catherine Oxenberg) allow him to excavate for artifacts from the era of the Roman occupation. In no time at all Angus uncovers an ancient mosaic of a snake, and a strange elongated skull from some unknown creature. Eve invites them to a party at the mansion of her boyfriend Lord James D’Ampton, the local squire (Hugh Grant), who is interested in Angus’s find because it seems aligned with the legend of the D’Ampton Worm, a mythical serpent slain by one of his ancestors. Bringing ill will to the district is the return of Lady Sylvia Marsh (Amanda Donohoe), a sly charmer secretly responsible for some recent tragedies as well as the disappearance of Mary and Eve’s parents. The young quartet explore a local cave in search of clues to that crime, while Lady Sylvia uses what turn out to be supernatural powers to locate more victims for a pagan worm-god she calls Dionin. Sylvia has already chosen Eve to be the next formal sacrifice. 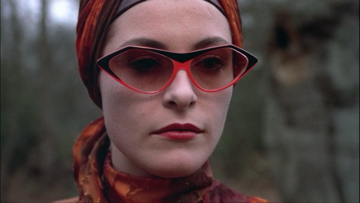 Russell updates Stoker into a fun horror romp that can easily contain the director’s mad sense of humor. Almost as in a Joe Dante film, the theme of snakes is tossed at us from all directions, with garden hoses and vacuum cleaner tubes used as snake substitutes, and a game of ‘Snakes and Ladders’ tossed into a fire and dubbed ‘Rosebud.’ The idea of snakes charmed by Arabian music gets a great workout in this eclectic horror stew. Terence Fisher’s The Devil Rides Out attempted a similar countryside duel with the forces of evil. Although it’s a good movie, it’s also slow and solemn. Angus, Mary, Eve and James take on the sinuous, seductive Lady Sylvia in a similar spirit of fair play. As we might expect from Ken Russell, the material soon leaps to new levels of kinkiness. Lady Sylvia dresses in high fashions, slinking about as if amused by her status as an immortal demon worshipper in a world full of stupid humans. Once revealed, her snake persona is like an anarchic Musidora come to wreak havoc, a nude force of pagan magic. Ms. Donohoe plays at least a quarter of the film wearing only greasepaint, in scenes staged by Russell in such high style that they circumvent the peepshow element that induces snickers in Tobe Hooper’s Lifeforce. This is great performance art, and Donohoe energizes a character that could well represent feminist power unleashed.

In a hilarious switch on innocence defiled, Lady Sylvia makes short work of a literal Boy Scout, toying with him until his imbecilic passivity becomes a bore. She takes a shine to Lord D’Ampton, and is too smart to victimize the local gentry. In a marvelous example of a ‘scene that should never work but works wonderfully,’ D’Ampton’s snake-charming music broadcast works exactly ‘like a charm,’ causing Lady Sylvia to writhe and dance her way clear of a wicker basket and out into the open.

Russell’s direction sometimes went off the rails in his daft musical biographies, but genre restraints brought out his best instincts and most impressive scenes. The magical cave found to represent the home of the D’Ampton Worm is so impressive, it could have inspired the whole project. The hiking adventures (‘potholers,’ the spelunkers are called) are beautifully filmed. The horror scenes involving snake-vampires are pure Hammer heaven, with Sylvia, another female snake-woman and even a transformed policeman sprouting reptile eyes and impossibly long, curved fangs. 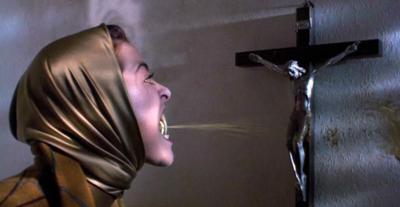 Even more successful are Russell’s wild fantasy sequences, some of which appear to have been composited partly in video. Lord James experiences a vivid dream in which he enters the Worm’s Lair but then boards a Concorde SST, to witness strange behavior by the female flight attendants. His somnambulent passivity mirrors the effect on later snake-charm victims, that are hypnotized or bitten into paralysis. Russell’s horror phantasmagoria is never predictable and never boring — and so elegant that we’re left balanced between unease and amusement.

When Eve touches a crucifix that has been venom-spattered by Lady Sylvia, she’s transported back to a pagan ritual where corrupt Roman soldiers rape Celtic (?) virgins under the grinning gaze of the monstrous worm — which is symbolically coiled around a crucified, struggling Christ. Although this is too brief and impressionistic to reach the level of outrage of Russell’s The Devils’, it definitely kicks the show into adult swim category. Likewise, Russell’s snake jokes enlist every suggestive snake-phallic association he can think of. Lady Sylvia defiles women as eagerly as she does men, and although Russell doesn’t get graphic, it looks as though she rapes Eve with a frightening strap-on device seemingly out of an ancient Roman mosaic of the pornographic kind. T’was ever thus in the Ken Russell school of sexual fun and games. 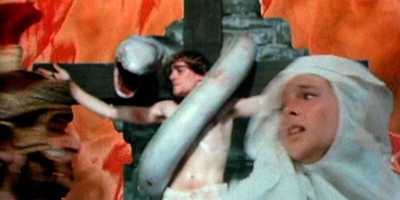 If nothing else, The Lair of the White Worm should be experienced to luxuriate in the terrific performance of Amanda Donohoe, who advances good natured Feuillade-level sly villainy into an art form. Entering a nicely composed postcard view of Mercy Farm, her Lady Sylvia pauses to silently address the camera as might a silent-movie character, visually saying, ‘see, it’s me.’ Mario Bava’s Diabolik makes the same kind of motion, acknowledging the audience — ‘I’m up to my old tricks again!’ When spoken by Donohoe, the arch dialogue comes to life. How fantastic it would have been for a William Dozier Batman show to be written and directed by Ken Russell.

The other players and win us over with performances pitched at a level of high earnestness,. Sammi Davis’s Mary is smart and lively, and game for every life-affirming adventure. Catherine Oxenberg undertakes more conventional damsel in distress duties. Russell allows Oxenberg’s Eve to keep her dignity intact and her underwear on when suspended over a sacrificial pit, a directorial kindness that we appreciate, just because we’re sick of stupid horror fantasies that have little else on their agendas beyond stripping women. The most noted White Worm alumnus is Hugh Grant, here scoring high on the upper-class charm scale. Lord James’s position is honored yet never placed in conflict with the commoners around him — he even jokes about Angus Flint’s unauthorized excavations on his feudal property. Even more fitting, James dons a Scots kilt to go into battle with the forces of evil. 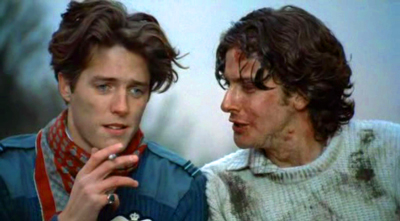 Fellow kilt wearer and a future Doctor Who, Peter Capaldi is sort of a Scottish Egon Spengler, a serious scientist who accepts goofball phenomena as a matter of course. A main reason that White Worm is so much fun is an absence of stupid characters and conflicts. We’d love to meet all these people, even a non-snake Lady Sylvia. Something like this spirit carried forth in the later comedies of Edgar Wright, which are likewise packed with fun people we enjoy being around. Hammer-era Brit horror often failed to place engaging people on screen.

Provided your inner prude can take the stronger sexual jokes, The Lair of the White Worm does everything 100% right, right up to its kiss-off coda. After wrapping up everything in lovely fashion — too bad this cast couldn’t go forward to fight mummies or space invaders — we get a half-joke faux-Polanski ending suggesting that all is lost. It wasn’t necessary. I’ve decided to embrace an ‘Alternate Fact’ and pretend that it never happened.

Lionsgate / Vestron’s Blu-ray of The Lair of the White Worm is a sparkling encoding of this Vestron Pictures production that splashes Ken Russell’s impressive images and bright colors across the screen. The show is so dazzlingly designed that it doesn’t even rely on blood imagery to make its best effects — a spritz of novocaine-like snake venom will do. In this good transfer we can appreciate the show’s engaging eye-candy, as with an early party scene with a Chinese dragon-like worm costume and an Irish (?) band that socks out a snappy ode to the D’Ampton Worm called, um, “The D’Ampton Worm.” The transfer flatters the film’s creative special effects, and the crisp sound renders the dialogue clearly, although English subs are provided. Music is employed as a plot device on numerous occasions, as when the silly Boy Scout almost turns the tables on Lady Sylvia by accident, when he starts to play his harmonica. The way she’s susceptible to such things is in itself hilarious. Unfortunately, a snake-killing mongoose proves impotent against a female serpent-vampire. Too bad. 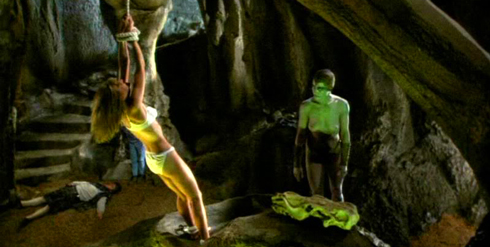 Lionsgate includes all the extras a horror fan could want. Ken Russell appears on a full commentary, happy to regale the listener with tales from the making of his film. His last wife Lisi appears on another track with film historian Matthew Melia, who begins his talk noting that White Worm begins almost identically to Piers Haggard’s grim and sober witchcraft tale The Blood on Satan’s Claw.

Three nicely produced featurettes allow Russell’s collaborators a chance to share interesting and often funny anecdotes about the filming. Worm Food gathers Russell’s effects fabricators and puppeteers to remember crazy times manipulating rubber snakes on stages crowded with naked actresses; editor Peter Davies recalls the director’s working habits in detail; and the charming Sammi Davis tells the whole story of her fun ‘n’ games stint performing for Russell. Wrapping things up are some trailers, a still gallery and a Trailers from Hell entry with a comment track by Dan Ireland.

I never caught up with The Lair of the White Worm until now… I think I want to see it again soon.