There appear to be no rules governing tricky politics in movies — Joseph L. Mankiewicz’s adaptation of Graham Greene’s novel about terrorism in French-held Vietnam completely reverses the author’s message. Does a conspiracy theory about a movie still carry any weight, when our daily political life now plays like one giant conspiracy? 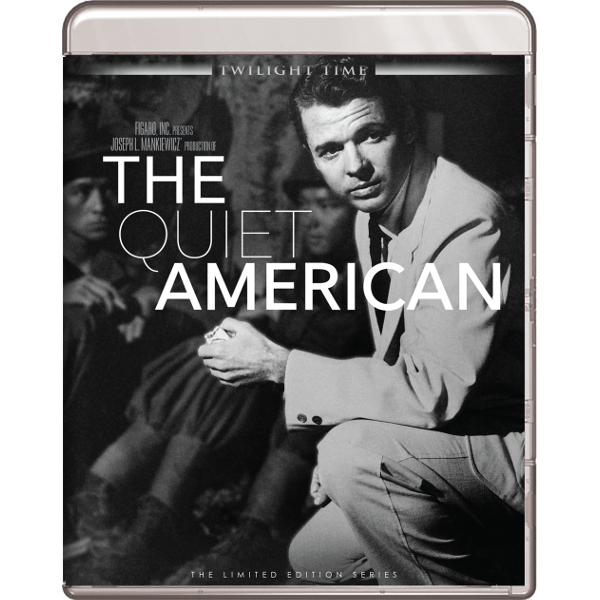 Fans of author Graham Greene know him for his political sophistication and his adherence to Catholic themes; he’s found holy values in a razor-wielding Spiv in Brighton Rock and he examined a ‘personal bargain with God’ in his The End of the Affair. Graham Greene’s prescience about Cold War issues wasn’t always appreciated, as can be seen by his amazingly well timed half-serious look at espionage in Battista’s Cuba (Our Man in Havana). Although his books took readers to other hot spots like colonial Africa, Greene’s most biting critique of the domino-theory mindset was a 1955 novel reflecting his three years’ experience in Vietnam, noting the ways in which foreign agents tried to manipulate the future of that war-torn country. France didn’t relinquish its Indochinese holdings after WW2.  The novel has a dissolute English journalist as a main character and Greene substitute, but it reserves its ire for Alden Pyle, an American CIA agent who ‘works for freedom’ by aiding in secret terror acts. Dirty tricks and surgical assassinations worked in Central America, so why not here in the Far East?

This fascinating 1958 version of Greene’s novel is a big-budget international production by writer-director Joseph L. Mankiewicz, Hollywood’s most honored man of letters and the creator of highly sophisticated dramas and comedies. Mankiewicz put his filmmaking where his politics lay, drastically altering Graham Greene’s story to invert its message. With the involvement of American star Audie Murphy, Greene’s duplicitous Yankee Alden Pyle is now an innocent victim, called only ‘the American.’ The blame for Communist gains in Vietnam is placed at the foot of a wishy-washy meddling Englishman duped by a few cheap tricks.

Much of this unique film was shot on location in Saigon; the authentic atmosphere alone is sufficient reason to check it out. The jaded English journalist Thomas Fowler (Michael Redgrave of Dead of Night) stays close to Saigon and his Vietnamese mistress Phuong (Giorgia Moll). His estranged wife back in England will not grant him a divorce, much to the distress of Phuong’s practical-minded sister (Kerima); Fowler is content to string Phuong along indefinitely. His happiness is cut short when the American aid representative (Audie Murphy of The Red Badge of Courage) comes into the picture and sweeps Phuong off her feet. Appalled by the idea that she was once a ‘club girl,’ the idealistic American has plans to marry Phuong and take her home to America. Suddenly realizing how much of a bounder he’s been, Fowler writes his wife to plead for a divorce. But another possibility presents itself: Fowler’s contact Dominguez (Fred Sadoff) puts him in contact with a Viet businessman named Heng (Richard Loo) who knows that the American is really a Yankee spy sent to start a ‘third force,’ a nationalist movement to counter the Communists and depose the French in favor of American control. The American’s smuggled explosives are behind a series of terrorist killings. Maybe something should be done about him? 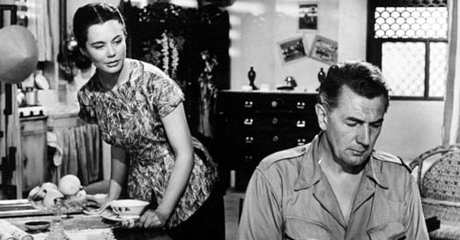 Greene’s story made the Thomas Fowler character a confused man who does the right thing for the wrong reason. He helps to eliminate the American to keep his girl and uses his moral outrage of the American’s underhanded political activities as a feeble excuse. Mankiewicz’ version plays almost identically in every respect until it comes time to decide the truth of the mystery. The story is shuffled so that that Fowler is the dupe of Communist assassins, easily maneuvered into thinking that an idealistic American aid agent could be behind violent incidents to influence the political climate in Saigon. How foolish can one get? Fowler indirectly confronts the American with his charges, and gets no response at all. The blame falls on a journalist with romantic insecurities, while the noble American is exonerated. Americans just don’t do terrible things like undermine governments, or support terrorism.

Mankiewicz was one of the most respected writer/directors in Hollywood and his The Quiet American was his first film in years that did not become a big success. Produced under the Figaro banner, it combined French, English and American acting talent with a mostly Italian crew and really benefits from its exteriors filmed on the authentic location. The realism and adult nature are remarkable for 1958 and it was considered a thinking man’s film from the get-go. As did most critics, Bosley Crowther of the New York Times sidestepped the whole controversy, noting the inversion of Graham Greene’s book but inferring that Mankiewicz leaves the death of the American an unsolved riddle. Graham Greene condemned the picture in no uncertain terms. 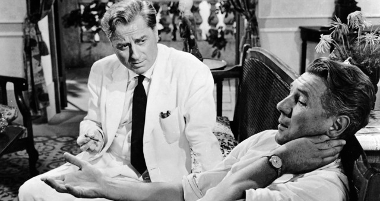 Interiors were filmed in Rome, with an international cast. The show can only be faulted for not using Asians in all the Asian speaking roles. Claude Dauphin (Barbarella) and several other Frenchmen are joined by the Parisian-Japanese Yoko Tani (of the East German The Silent Star). Michael Redgrave is almost the lone English actor. The interesting-looking Italian actress Giorgia Moll (Contempt, Land of the Pharaohs, two Steve Reeves spectaculars) is capable as the Vietnamese love interest despite not looking very Asian. The calculating sister is played by Kerima (Outcast of the Islands and Land of the Pharaohs as well), another Frenchwoman.

Audie Murphy is certainly surprise casting; one would hardly think he merited such an important role. The troubled ex-soldier occasionally performed well but is barely adequate here. His shallow acting style does little but enhance the character’s superficiality. Everything this mystery man does, from suddenly showing an interest in Phuong to magically appearing in a war zone, seems suspect. Murphy’s casting may have been an attempt by Mankiewicz to entice American viewers into seeing a political movie. The most puzzling thing about Mankiewicz’s The Quiet American is that he would make it at all. Before the 1970s, most any filmmaker adapting a book so critical of American foreign policy, even a top Hollywood mover and shaker, would surely come up against formidable pressure to change course. Various sources say that Mankiewicz worked directly with the CIA to re-shape The Quiet American, but even starting in that direction leads one into the realm of conspiracy theories.

Seen today, viewers can ignore the politics and concentrate on Michael Redgrave’s hothouse performance, and soak up the rich atmosphere of scenes filmed among the crowds on the Saigon streets, day and night. Like so many Greene protagonists, Fowler ends up staggering unshaven in public, wondering what turned his life upside down.

Phillip Noyce’s equally well made 2002 Michael Caine remake, with Brendan Fraser as Alden Pyle, is faithful to the Greene novel. By that time it seemed almost irrelevant to make a movie questioning the origins of U.S. adventurism overseas, back in the salad days when the CIA enjoyed such covert success: we were just a few months away from starting a war that would permanently destabilize an entire region.

Back in the time of Graham Greene, a novel like The Quiet American might stimulate controversy and even change a few minds. Putting aside the issue of whether or not Greene’s opinions were simply bitter anti-American propaganda, we miss an intellectual culture where important opinions by knowledgeable spokespeople could find a mass audience. With today’s cacophony of Internet noise and compromised sources of information, the public discourse on such subjects is hopelessly muddied. Nobody pays full attention, even when bombs are going off in our own back yards. 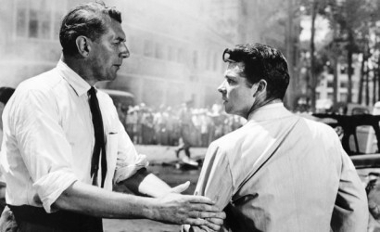 The Twilight Time Blu-ray of The Quiet American blows away an inferior flat-letterboxed MGM DVD from 2005. Now we can appreciate Robert Krasker’s fine B&W cinematography, and even Audie Murphy’s performance seems improved.

Twilight Time includes an original trailer and a partial music track that contains some sound effects. Julie Kirgo’s liner notes in the illustrated pamphlet wisely stays away from drawing conclusions about Joseph L. Mankiewicz’s ‘interesting’ alteration of Graham Greene’s story. She does her best to suggest that the movie’s overall aim is critical of all political meddling and therefore isn’t so negative. Authors Eugene Burdick and William Lederer followed up with the similarly titled The Ugly American that really fouled the issue — their American meddler in Southeast Asian affairs is a politician twice as idealistic as Alden Pyle, and yet another innocent victim of political treachery.