It’s Obi-Wan versus Fidel! Well, not really. The pre-Bond espionage genre lights up with cool intrigues and comic absurdities, as a Brit vacuum salesman in Havana is recruited to spy for Her Majesty’s Secret Service. The filmmakers and stars are all top caliber, and the location is legendary: Castro’s Cuba, immediately after the revolution. 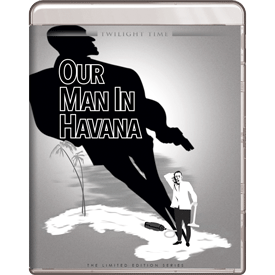 One of the best pre-James Bond spy pictures is this brilliant, yet lumpy adventure with an historically unique setting — it was filmed in Castro’s Cuba, just after the revolution and just before relations between Cuba and the U.S. went sour.

Novelist and real-life intelligence operative Graham Greene had a knack for living in exotic locations just before they became international hot spots, whether in Africa or in the Far East. In 1958 Joseph L. Mankiewicz mangled Greene’s Vietnam-set The Quiet American, inverting the author’s message about C.I.A. meddling overseas. For the Cuban-set Our Man in Havana Greene took a personal hand and wrote the screenplay himself. Carol Reed’s production for Columbia sent Alec Guinness and an all-star cast to film in Castro’s Cuba. As a major subplot indicts the corrupt, murderous police force of dictator Fulgencio Batista, Reed had few if any problems getting permission from the revolutionary government. Oswald Morris’ CinemaScope cameras take full advantage of the local atmosphere in Old Town Havana, recording a fairly incredible moment in history. 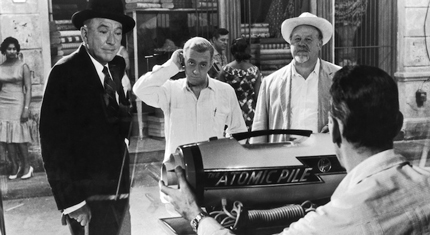 Although beloved by fans of film espionage, Our Man in Havana was not a big hit. It’s an uneven satire about politics and espionage that contrasts a realistic view of conditions in a police state with understated British comedy. It’s actually not understated enough. The tone veers from deadly intrigue to near slapstick, and Greene’s dialogue tries for too many verbal puns. Alec Guinness’s mild mannered vacuum cleaner salesman doesn’t always seem the right character for the mix. He’s endearing though, and so is the movie. It’s The Third Man in tropical attire, drinking a daiquiri.

Latin rhythms dominate as we meet the cast on a sunny day in Havana, sometime before the revolution. Englishman Jim Wormold (Guinness) sees little profit from his vacuum cleaner store and wonders how to give his daughter Milly (Jo Morrow) the country club luxuries she seems to require. His answer comes from Hawthorne (Noél Coward), an old-school intelligence operative who enlists Wormold to organize local contacts and collect information for the crown. Wormold fails to operate in any competent way, but he likes the pay. He invents a string of imaginary agents and pockets their monthly pay packets. Asked to ‘get results,’ he fabricates a non-existent secret atomic construction in the Cuban mountains. To Wormold’s dismay, London sends him an administrative assistant, agent Beatrice Severn (Maureen O’Hara). Soon Wormold is in a triple bind. While he tries to hide the truth from the attractive Beatrice, a real and dangerous adversary appears, opposition agent Carter (Paul Rogers). Wormold’s friend Doctor Hasselbacher (Burl Ives) a German doctor, is beginning to act suspiciously as well. Even worse, daughter Milly has attracted the amorous attentions of Police Captain Segura (Ernie Kovacs), a brutal torturer known as “The Red Vulture”.

Our Man in Havana is a satire on British spy practices that Graham Greene knew well; he’d seen agents commended for turning in false reports to pad their expense accounts. Greene also made plenty of Wormold-like silly mistakes, like locking his secret codebooks in a safe and then not being able to locate the combination. But much of his story is quite serious. Pre-Castro Havana is a city where anything can happen, much like Vienna of The Third Man. Foreigners usually have some pointed reason to be there. Jim Wormold behaves as if he’s hiding from the world, and the sad Doctor Hasselbacher seems to be living down some disgrace or tragedy in his past. Since the 1930s Havana had served as a haven for organized crime and a brothel for American tourists. At one point Wormold matter-of-factly indicates the scope of vices that can be bought in : “Everything here is legal.” The threat posed by the sinister Captain Segura is a historical reality, as Batista’s secret police operated like gangsters, not even bothering bother to disguise their tortures and murders. At one point Wormold asks Captain Segura if his cigarette case is the one he’s heard about, “the one made of human skin.”

Ordinary guy Wormold is a highly unlikely secret agent. Wormold engages in serious heartfelt talks with his daughter Milly, and then has failed, near-slapstick attempts trying to enlist agents. When Wormold follows one prospect into a men’s room, the guy gets the wrong idea about his intentions. Wormold draws up a fake sketch of the supposed secret base in the hills, making it look just like one of his vacuum cleaners. Spies attempt to poison Wormold at a business luncheon, a scene that’s quite humorous until a little dachshund drinks the liquor intended for Our Man. The film sometimes seems a black comedy in the Ealing tradition, but more often comes off as a straight drama. At the center is the slightly downcast, poker-faced Jim Wormold. His one good quality is his calmness; not even Segura can shake him. Secretly terrified of his own shadow, Wormold has everyone thinking he’s a brilliant master spy. 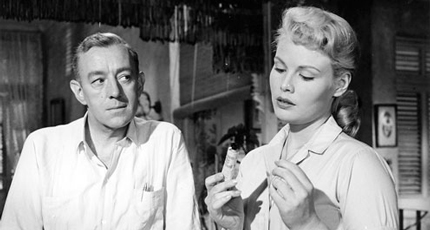 The lighter and darker aspects in Grahame Greene’s screenplay don’t always mix well. The comedy becomes increasingly broad, even as events slide into a more serious groove. London believes Wormold’s claims, but so do Her Majesty’s enemies, and innocent people suspected of being Wormhold’s agents show up dead. Wormold does finally use a gun to even the score. Alec Guinness’s passive, sometimes uncomprehending attitude makes the mystery into an intellectual game, with some sentimental asides and silly details. Guinness’s Wormold is a fascinating construction. He has a well-developed relationship with his daughter. We’re curious about the untold story of why his wife left him, and intrigued by his loyalty to his friend Hasselbacher.

Burl Ives is appealingly melancholy as the German doctor who delivers bad advice and folds up when things don’t go well. Maureen O’Hara offers an uncharacteristically nuanced performance as the associate spy who falls in love with her boss; that she doesn’t see through Wormold’s deceptions doesn’t make her look stupid. Jo Morrow’s Milly is every father’s nightmare, a daughter that’s going to attract every Wrong Guy in the universe, and whose values need a little tweaking. Wormold just wants her to marry someone English, who can support her, and who doesn’t have a mistress. Milly’s dates with the creepy Segura don’t seem to upset Wormold as much as they should. 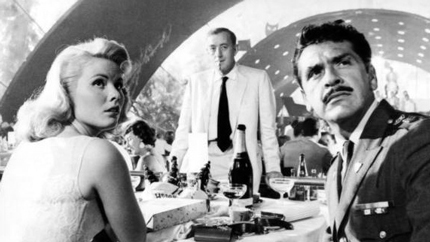 Ernie Kovacs is brilliant casting. Dropping his comedy persona, he’s extremely good as the menacing Segura, a killer with little Cuban flags on the pistol grips of his gun. In terms of looks and attitude, Segura is no clown; even Latins watching Our Man in Havana approve of his performance. The scene where Segura and Wormold play a drinking game with a game of checkers is a winner, a triumph of dry guile against macho posturing. (top picture ↑ )The late-night drinking game would seem to indicate some creative borrowing occurred. Along with the rest of the Segura and Wormold relationship, the game is similar to a scene in John Huston’s We Were Strangers. In that movie Pedro Armendariz’s corrupt Havana policeman has an identical late-night drinking competition with Jennifer Jones. The setting is Havana but the time is 1933, during the reign of a different dictator.

Some of the high-powered casting doesn’t contribute to the clarity. The veddy proper Noël Coward prances through bars and walkways, followed by a personal orchestra of street musicians. The refrain they chant translates as, “Where are you going?,” which is fairly amusing. But in Coward’s London scenes with Ralph Richardson, the level of comedy deteriorates almost to the Get Smart level of inanity. Saying that the Brit intelligence men are out of touch is one thing, but these guys are silly and the jokes are terrible. Noël Coward imay be the epitome of English wit, but his final dialogue in this picture is like something from Hogan’s Heroes. When watching Our Man in Havana I try to ignore those scenes (and the gay pick-up jokes) and concentrate on the film’s strengths. The film wickedly posits spies as competing vacuum salesmen killing each other to secure sales territories. That seems to be what international espionage really amounts to, anyway. 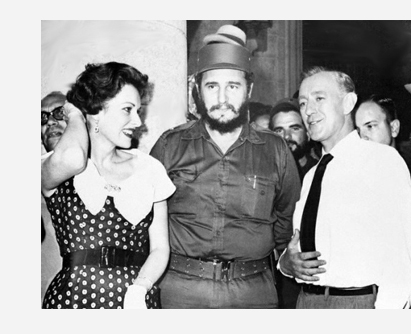 Our Man in Havana has an authentic background, expressive direction and interesting characters. Politically astute, it suggests the horrors of Batista’s police state without making any statements about the revolution to come. The movie has become a Savant favorite; I’ve seen and enjoyed it so many times that its minor faults no longer seem evident.

There is strong evidence of editorial tampering in a back street confrontation scene. Wormold shoots once at an adversary and then strolls away, and director Reed probably wanted the violence to remain ambiguous. Some Columbia editor instead cuts in another close-up of Guinness shooting his gun back in his initial position, creating a totally discontinuous mismatch.

Sometimes it’s difficult to figure the logic in these obvious editorial fumblings. Columbia imposed another annoying ‘clarify the shooting’ editorial intrusion on Joseph Losey’s The Damned (These are the Damned), filmed just the next year. Against the director’s will, a shot of a character shooting a gun was added to a key scene, disrupting the flow of images. 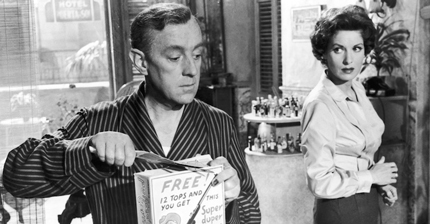 The Twilight Time Blu-ray of Our Man in Havana is an extremely welcome HD scan of this one-of-a-kind picture. I take pleasure in just observing the location — Carol Reed’s cameras wandered all over Havana, even into the giant nightclub theaters with the huge stage shows and their parades of showgirls. The B&W CinemaScope camera always stays a little wider than it needs to, immersing us in the context of the locations. An enormous downtown saloon in the first part of the film has a bar that looks to be sixty feet in length, lined with bottles. No film set could evoke such a time or place.

The original trailer is quite an oddity — before the SuperSpy craze, placing an ‘international intrigue’ espionage story in a peacetime setting was not easy. What looks like a light comedy ends with a shot of Gunness shooting a gun, and then strolling away down a midnight street, acting as if nothing had happened. The trailer copy rushes to remind people of The Third Man, then eleven years in the past. Reviewers tended to give Carol Reed a hard time whenever he chose to tilt his camera again, as he does on occasion in Our Man. Today we notice the similarity between Reed’s opening shots of the swimming pool on the roof of a Havana hotel, with the same locations used by a Russian director, for the same purpose, in 1964’s Soy Cuba.

Julie Kirgo’s liner notes place what is special about Our Man in Havana in terms of its author and prestigious cast. I doubt it is popular among the first generation of Cuban exiles; I once read a bio of a popular Cuban-American singer, performing in Florida, who proudly said that her father had been the police chief of Havana before the revolution! Kirgo acknowledges that John Le Carre more or less rewrote Greene’s basic story, which became the 2001 Pierce Brosnan movie The Tailor of Panama.

And here is John Landis on Reed’s jaunty satire: