Steve Martin brings down the house with this adoring, hilarious pastiche of mad doctor and disembodied brain motifs — surely the epitome of cultured comedy. Under Carl Reiner’s direction Martin is marvelous, and he’s aided and abetted by the daring sexpot-turned comedienne Kathleen Turner — who has a better handle on outrageous sexy comedy than they do. It’s class-act nonsense and inspired silliness. Where else can a crazed surgeon proclaim his special screw-top skull surgery method, and utter the immortal words, “Scum queen?!” 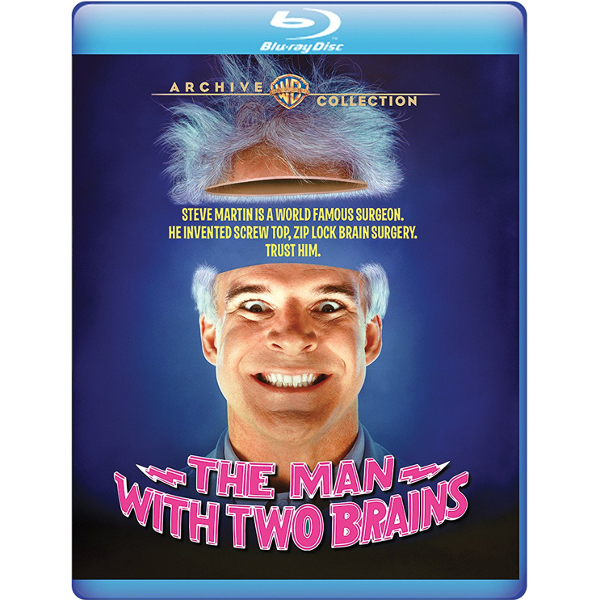 Horror comedies are a real hit & miss proposition, especially when the distinction between the two can be blurred. James Whale proved complete compatibility was possible with The Old Dark House, as did several German silent thrillers. For the longest time Roman Polanski’s The Fearless Vampire Killers was slammed for not being funny, when it too was more interested in the intersection of comedy, horror and our awareness of the genre. In the middle 1970s comedian Steve Martin came on the scene with a bang; besides his great contributions to Saturday Night Live I believe I first saw him in a Carl Gottlieb short subject with Teri Garr and Buck Henry called The Absent-Minded Waiter. It ran with a screening of Network, and brought down the house. 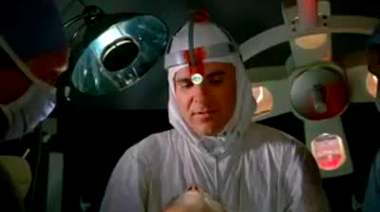 As a comedian Martin continually took daring chances. Re-activating director Carl Reiner, they made four pictures together, three of which were original goofballs, with the kind of comic/visual anarchy associated with the Marx Bros. and the willingness to stretch notions of good taste that we at the time associated with Mel Brooks. The Man with Two Brains is perhaps the best-made of the Martin-Reiner pictures. Its satire of (already) silly horror pictures is effortlessly accurate, and the outline provided by the genre keeps the comedy on track. Best of all the filmmakers found the perfect foil for Steve Martin’s ‘wild and crazy’ screen persona. With just one movie, the smash success Body Heat Kathleen Turner had become an instant star. Her unexpected comedy performance in Two Brains is nothing short of brilliant, as she manages to play her ridiculous character straight while simultaneously demonstrating that she’s in on the joke. She’s particularly effective when the humor becomes agreeably vulgar. Like a reverse Margaret Dumont, the elegant and intelligent Kathleen Turner scores big with jokes that less adventurous actresses wouldn’t go near.

The level of comedy isn’t quite as disconnected/purposely stupid as Martin’s The Jerk, but silliness still reigns supreme. ‘Brilliant’ brain surgeon Dr. Michael Hfuhruhurr (Martin) works on two crania at the same time, using his miraculous screw-top brain surgery technique. He falls madly in love with a car accident victim, Dolores Benedict (Kathleen Turner), and saves her with a brain operation. A domestic femme fatale of awesome powers, Dolores has just antagonized her poor millionaire husband Timon (George Furth) into a fatal heart attack. She now seduces Michael with visions of incredibly hot matrimonial sex, promises that evaporate after the ceremony — she claims a headache for weeks on end while Michael goes mad with frustration. He eventually learns that she’s a promiscuous ‘Scum Queen’ and prepares a divorce. A trip to Vienna brings Michael to the mad lab of renegade researcher Dr. Alfred Necessiter (David Warner), who has been taking the brains ‘liberated’ by a serial-murdering fiend known as The Elevator Killer (?) and keeping them alive in jars. To Michael’s surprise, he finds that he can communicate telepathically with Brain #21, which formerly resided inside the head of the deceased Anne Uumellmahaye (voice: Sissy Spacek). Finally encountering the true love and companionship his marriage lacks, Michael sets out in search of a sexy body into which he can plant Anne-The-Brain. But other complications ensue. Dolores discovers that Michael has just inherited a fortune, and seeks to repair their marriage. And Dr. Necessiter has his own plan to transplant Anne-The-Brain into the body of a monstrous gorilla.

It seems fairly obvious that Steve Martin, Carl Reiner and co-writer George Gipe were inspired by the brilliant psychotronic classic The Brain that Wouldn’t Die when dreaming up Steve Martin’s mad doctor with the unpronounceable name. Let’s see here, we have telepathic communication between people and brains and a sleazy search for a new body for a disembodied sweetheart. As always, Martin keeps utterly ridiculous jokes afloat with little more than a stupid grin, a fast tongue and impressive physical gyrations. A silly dance is terrific as is a silly song duet, but he also makes a comedy meal out of the old gag of carrying a woman up some steps. Are hidden wires being used? The effect of Dr. Hfuhruhurr staggering to and fro while carrying Dolores is flawless.

The gags fly too fast to count — the cat in the operating room comes to mind first. The various jokes about crazy surnames shouldn’t be funny, but are; we also love the extended moment when Michael asks God for a ‘sign.’

Made all the more glamorous by Michael Chapman’s glowing cinematography, Kathleen Turner maintains the power that two years before had made her the sexiest woman in film — who can forget the image of she and William Hurt cooling their sore body parts in a bathtub filled with ice water? Ms. Turner’s class and skill — and fearlessness — finds the right spirit for the outrageous comedy. The comedy is too good to rely on gratuitous profanities, but when it crosses the line we really know it. Dolores Benedict’s oral fixation is expressed in two scenes where she eagerly sucks Michael’s finger, which is the closest he gets to sex with this vicious hot tease of a fianceé. Sexy-dirty can be funny, and when it succeeds it can be genuinely liberating. Ms. Turner’s subsequent movie choices prove once again that the great actresses of the 1980s just weren’t being offered parts worthy of their talent. Those women were more daring and game than the male stars, or the play-it-safe directors. 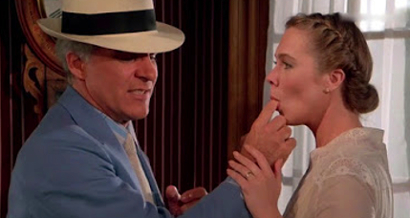 The satire-pastiche of mad doctor movies is priceless, with gags that are a joy to behold. The screw-top transplant method comes complete with spinning wigs and the sound of a porcelain jar closing; Michael finishes his operations as if he were a DJ dancing as he spins records. David Warner plays Dr. Necessiter totally straight and is marvelous; his ordinary apartment hallway opens into a stone dungeon-lab with vaulted ceilings and massive doors. Because the walls are still paper-thin, the neighbors still shout for him to keep his mad-doctor ravings to a minimum.

The jolly mad lab set brings us to designer Polly Platt’s contribution to the picture. It’s easily the most attractive of the Reiner-Martin shows, with beautifully-coordinated interiors that advance the lush vibe of old Doris Day movies. I’m betting that the brilliant Platt also influenced the jokes and direction. One of the reasons that the two ‘carrying the bride’ scenes work so well is that the design is so elegant — everything is pleasing to the eye, yet the sets don’t overpower the comedy. The mad lab is so perfect that our mind doesn’t wander, trying to see if if contains more hidden jokes. Yes, the brain jars are arranged in a colorful circle, and the monster gorilla is in a cage in the next room. We don’t quite understand where the gag for all the breakaway doors comes from, but the insubstantiality of the stone walls strikes a perfect note. It’s the eighties, after all — Dr. Necessiter wants the lifestyle of living in a spooky castle, but a fake illusion will do just fine. 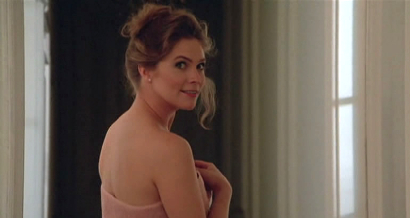 The picture is R-rated, so flashes of nudity abound. This is one movie that knows how to properly put across a dirty joke. Michael’s search for a GREAT body to go with the brain he loves spins a seedy notion from The Brain that Wouldn’t Die into what might be a parody of Irma La Douce: our lovesick surgeon roams around a red light district, individually checks out the tarted-up hookers, and chooses a blonde Amazon with a flawless figure. We burst out laughing when we hear her voice. Is this some life lesson learned from Vaudeville and Burlesque? When John Landis worked topless scenes into his movies there was always a discomfort factor, as if Roger Vadim had convinced him that the only reason to make movies was to undress women.

The secret identity of The Elevator Killer and the way he works into the story is better than priceless. The silly gags aren’t random but resonate, which means that The Man with Two Brains doesn’t evaporate the way some scattershot comedies of the time did. Reiner and Martin’s monster mash brain party picture is leagues ahead of most of the Saturday Night Live competition. Poor Gilda Radner didn’t get a good break in features, while Chevy Chase found some success with a series of mostly obnoxious pictures. Steve Martin’s ambitions were higher. Fans think that he overreached with the expensive, weirdly downbeat remake of the Bob Hoskins TV miniseries, and he certainly made his own share of downgrade ‘dumb’ comedies. But when Martin is in the groove he’s sensational. His ‘wild and crazy’ comedy persona never tires because he’s having such a great time and because he raises our spirits with his own. I haven’t seen all of the features Carl Reiner directed, but this is my favorite so far.

The Warner Archive Collection Blu-ray of The Man with Two Brains is a sparkling scan of this bright, funny and naughty farce; the clean images highlight the high-key cinematography. The widescreen formatting also improves on old TV prints.

The only extra is a nicely-cut trailer, that indeed makes the movie seem wild and crazy.

While watching the movie I thought that Anne-The-Brain sounded exactly like Sissy Spacek, but decided that the voice must be that of Kathleen Turner, doing double duty. Nope, none other than Ms. Spacek, another fearless actress, enacts the disembodied brain’s inquisitive dialogue.

We have zero complaints overall but are informed that the movie was slightly trimmed from its initial release length, apparently by the filmmakers. Various gags were dropped, including one that extends the joke of Michael toting Anne-The-Brain around in a cat carrier.