Forget your ‘Jan in the Pan’ jokes and all those ‘thing in the closet’ remarks about gay subtext. This loopy, kooky and kinky horror offering from New York’s Tarrytown is a keeper despite its primitive direction and campy screenplay. Mad scientist Herb Evers answered the call to Bring Me the Head of Virginia Leith, and goes on a sleazy shopping spree to find a voluptuous body to make her complete, in the literal sense. It’s all in the worst of taste: in other words, delightful. 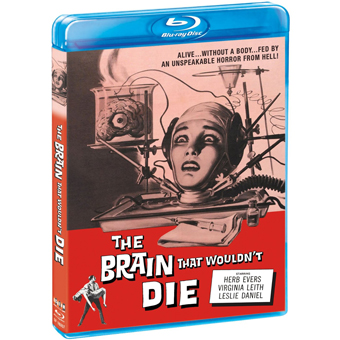 Once upon a time before video and digital streaming, most movies were out of reach. A weird title might show on TV once a year, or not at all. A Cult Movie could emerge from the collective fan consciousness only by word of mouth. We heard about strange films through a photo in Famous Monsters of Filmland, or maybe from a friend whose brother saw it at a drive-in. Made in 1959 but not released for three years, The Brain that Wouldn’t Die is the genuine article, a title that almost nobody saw when new. We instead learned of it through trickle-down rumors about content that for the 1960s sounded unthinkably weird and gross. 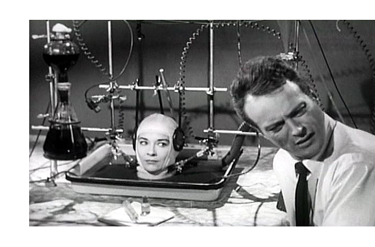 You can tell a lot about a movie that declares itself The Brain that Wouldn’t Die up front and The Head That Wouldn’t Die over its end title. This is one of the most endearingly eccentric of the Z-budget independent cheapies. Probably snapped up by A.I.P. when no other distributors were interested, it played in a double bill with Invasion of the Star Creatures before appearing in abridged form on late-night TV broadcasts. Uncut copies didn’t circulate until much later, in the heyday of graymarket Sinister Cinema VHS releases. With this Blu-ray, the show now looks as if it came out of the lab yesterday.

Dr. Bill Cortner (Jason Evers, here billed as Herb) is obsessed with unconventional surgical ideas discouraged by his father, who is also a surgeon. But not even Bill’s fiancée Jan Compton (Virginia Leith) knows that he has installed his own Frankenstein-style mad lab in the family country house, watched over by his crippled, warped assistant Kurt (Leslie Daniel). Bill and Kurt keep an unseen ‘Thing’, the result of a failed earlier experiment, locked away in a dark room.

A teeny tiny accident happens on the way to the lab… Jan is decapitated in an auto mishap. But faster than you can say “Suture self,”  Bill has Jan’s head propped upright in a plate of blood and connected to various life-sustaining support systems. Although Jan’s ghostly voice begs to be allowed to die, Bill makes plans to graft her head onto the body of another. He leaves Jan to her morbid thoughts and goes out on the town to choose his future wife’s body from the available babes & strippers. Back in the lab, Jan discovers that Bill’s special life-sustaining serum has given her extrasensory powers. She commences transmitting telepathic orders to the horrid Thing in the Closet. 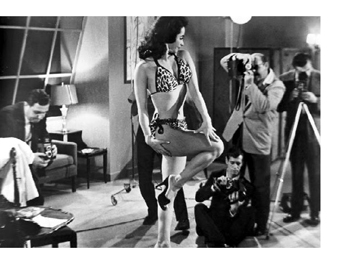 Underfunded, under-directed and dripping with some of the earliest outright gore scenes, The Brain that Wouldn’t Die is a wonderful concoction. It has perhaps the worst directed & edited auto accident ever in a movie. It’s also padded with strip acts and catfights, trashy content that was apparently retained in the general release for the kiddie matinee market. But artistic poverty is totally beside the point. Enjoyable precisely for its utter lack of taste, the film features three great — no, awful – no, great camp performances.

Star ‘Herb’ Evers plays a cheerful slimeball, a mad doctor with an active libido. The actor doesn’t seem concerned that he’s risking his career with this movie, and acquits himself well under what is often very primitive direction. As the assistant with a mangled hand, Leslie Daniel wins the Jay Robinson Award for exuberant delivery of grossly overwritten dialogue — you want to clap for him. Like another horror favorite Harriet White Medin, Daniel acted in two Roberto Rossellini movies right after the war under his real name Anthony La Penna. His film career was mostly in voice work.

That the movie works at all is due to Virginia Leith, who is never humbled by the risible situation of playing a head on a dish. Her accusing voice is the first thing heard in the film, saying the creepy words “Please let me die.” Nine years earlier, Ms. Leith was the only woman in the cast of Stanley Kubrick’s first movie, Fear and Desire.  She’s always an eccentric presence; perhaps her best (conventional) screen role is in Richard Fleischer’s Violent Saturday. Jan begins the show as a vivacious, life-loving type — who clearly doesn’t know what kind of a creep she’s involved with. When she’s reduced to a brain in a pan, her dialogue turns to morbid debates with the twisted Kurt, he with the deformed arm and hand.

Meanwhile, Bill hops into his convertible and takes off on a madcap sexual shopping spree. The playboy surgeon watches a beauty contest, and the strippers at the nightclub fight for his attention. The women expect men to be interested in them mostly ‘from the neck down,’ but can have no idea how literally Bill is taking that cliché. He finally finds the perfect candidate, a private photo model with a perfect body and a nasty scar on her cheek. As sick, sleazy sex fantasies go, this one gets an A-plus. 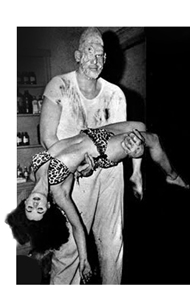 The Brain that Wouldn’t Die is the kind of movie that inspired the word ‘Psychotronic.’ The narrative is so patently unreal that the question of how a severed head can possibly talk becomes irrelevant. When the surgeons expose a human brain, there’s no sign that the patient has a skull. Details like this make The Brain one of the best of the Z-pictures, the kind of irrational creepshow that once aired on local television stations at 2 AM. You would watch it half-asleep and then spend the next day wondering if it you had partly dreamed it. It’s as if the show had beamed in from another dimension — absurdly ridiculous, but impossible to forget.

Surgical horror made a comeback in the late fifties with George Franju’s Eyes Without a Face, which appeared roughly at the same time as this movie and another sick surgery picture, Die Nackte und der Satan (The Head). And then there’s the sub-sub genre of movies about severed heads being kept alive, like the ever-popular Madmen of Mandoras (They Saved Hitler’s Brain). But Virginia Leith’s cultured noggin has a special appeal. While we shudder to think what will become of Jan, her brain is concentrating on problems of advanced existential morbidity. She and Kurt debate the definition of Horror at length. The dialogue is a stack of unreal declarations straight from the pulpy depths, yet it stays focused on the issue at hand. Kurt has a twisted hand, the Thing in the Closet is an outright monster, and Jan is a disembodied head that repeatedly begs to die. Her fiancéé seems interested only in her new body, and it’s not even going to be her body. It sounds like the setup for a new TV sitcom.

The dialogue is sufficiently stylized to attract online interpreters such as the persuasive Doug Bonner, who asserts that The Brain that Wouldn’t Die is High Art. We never know what the wild-eyed Jan will hiss next. Two or three times her angry, accusing words chill the blood: “Like all quantities, horror has its ultimate – and I am that.” Weirdness has its ultimate, too, and this absurd, sleazy show earns a high score.

Scream Factory’s Blu-ray of The Brain that Wouldn’t Die is the edition that fans are waiting for. MGM has the original intact film elements, including the over-the-top gore scene that was once a rare item. The picture is bright and sharp, redeeming the honor of cameraman Steven Hajnal, whose work is just fine. The close-ups of Virginia Leith are the soul of medical horror — a piece of living flesh held erect with shiny lab equipment. For the first time I can tell that some of the wide shots use a fake Jan head — the image is sharp enough to betray that it’s only a so-so mockup.

This is the long version, with more of the sleazy female wrestling footage as well as the famous shots of gore at the end. The Thing in the Closet breaks out and is finally able to get its hands on someone to mangle. A man with his arm torn out paints a broad bloody swath along a wall, which was strong stuff for 1962. The finish is abrupt and disturbing, and the haunting final dialogue line is justly famous. Call it junk or sleaze, The Brain that Wouldn’t Die holds together. 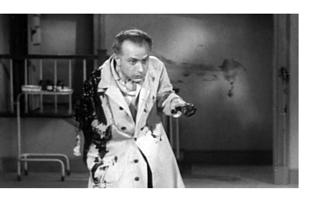 The extras include a four-minute stills montage, a trailer (a flat transfer) and a picture-only nude alternate for the photo shoot scene, ostensibly for foreign use. It makes the movie seem more like a soft-core nudie production of the time — crude in some aspects but aimed squarely at its target audience. Very welcome is the funny MST3K version of the movie, in standard definition.

The audio commentary is problematic. Veteran expert Steve Haberman shares the track with Tony Sasso. Most of the commentary is a put-on, wasting our time with jokes and put-downs. We’re told that Sasso has written a book on the making of The Brain that Wouldn’t Die. We found no Amazon listing for such a book, so assume that’s part of the joke as well. Haberman starts from a position that the movie is worthless. He keeps telling us how bad it is but is soon contradicting himself with pauses to mention something he thinks works well. Sasso makes an annoying running joke out of the film’s repressed homosexual subtext, rather than just say that, yep, it looks like the screenwriter had a high time playing that game. Yes, we get it — there is something screwy about the oversexed doctor’s relationship to his Ygor-like assistant, a crippled Theater Queen. And the Thing in the Closet can be seen as their perverse offspring. But that’s a starting point. The talk would be more interesting if Sasso had anything relevant to say.

The commentators do dispense a few facts with the comedy. But even those seem unreliable, after Haberman insists that the title track is the cue listed in the main credits, “The Web” by Abe Baker. Even I know that’s wrong. The jazz tune can be heard online, right here.

The Brain is compellingly watchable. It’s entertaining, especially Virginia Leith’s genuinely uncanny performance. I remember fellow editor Todd Stribich showing me an article in an old issue of Filmfax, which imparted useful and interesting information about the film’s production. Horror fans like to laugh at these movies, but we also value and admire them, no matter how humble they may be. If we want comedy we’ll opt for the MST3K version, which doesn’t affect an air of smug superiority. Scream Factory’s disc is highly recommended.

Here’s John Landis on The Brain the Wouldn’t Die