The Film Noir Foundation has helped revive yet another difficult-to-see noir gem — the murder cover-up tale begins with a shooting in a mansion and races across San Francisco to a finale given classic lines by director Felix Feist. And the casting: Saggy Lee J. Cobb as a romantic leading man? Sunny Jane Wyatt as a duplicitous killer?   Bring it on! 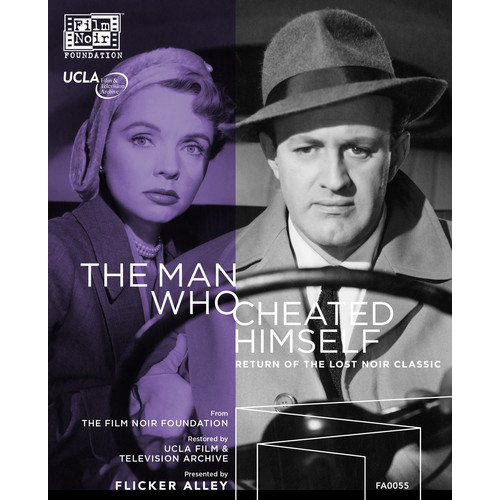 In the late ’40s film noir was the default vehicle for ambitious filmmaking — after producing two early Anthony Mann noirs even the much-maligned W. Lee Wilder made his mark with the interesting thrillers The Glass Alibi and The Pretender. After a very odd post-apocalyptic sci-fi epic and a decade of short subjects, the creative Felix E. Feist found his footing in noir for a few years, with the celebrated Death Thumbs a Ride and The Threat, effective thrillers fashioned with modest means. 1950’s The Man Who Cheated Himself shows what Feist could do with a reasonable budget and an excellent script by two top pros, Philip MacDonald and Seton I. Miller. Produced independently by Jack L. Warner’s tearaway son Jack M. Warner, the show measures up to studio product in every respect. Its strong suit is some sensational location filming in San Francisco. Casting is its weakest link, although we welcome seeing some favorite faces in offbeat roles.

The movie’s relative obscurity comes from its status as an ‘orphan’ picture not owned by a major studio — it disappeared from TV showings before the home video era began. Its return isn’t quite the rescue job done for the similarly San Francisco-set, once un-seeable Woman on the Run (also a fine Flicker Alley disc release) but it’s a major noir rediscovery.

The tale follows general James M. Cain contours. Tough detective Ed Cullen (Lee J. Cobb) welcomes his younger brother Andy (John Dall) as a new detective working for homicide. Just married to the artist Janet (Lisa Howard), Andy puts off his honeymoon to work on a case with screwy facts and scattered clues that won’t come together. The victim Howard Frazer (Harlan Warde) was the husband of wealthy socialite Lois Frazer (Jane Wyatt). The problem is that we’ve already seen the truth: Ed is Lois’s illicit lover. Correctly guessing that Howard wished to murder her, Lois beat him to the draw, with Ed as a witness. Ed’s hasty cover-up would have settled the matter were it not for a nagging flaw: little brother Andy proves to be a regular Sherlock when it comes to sussing out the truth of events.

The Man Who Cheated Himself really moves — Feist and his adroit crew propel the streamlined narrative through scores of locations, getting maximum value from time spent in the City by the Sea. The camera in motion for rooftop chases and a finale at the imposingly iconic Fort Point at the foot of Golden Gate Bridge. The exterior is famous from Vertigo — alas, post- 9/11 fences no longer allow visitors to walk to the windward side where Madeleine Elster took her swim. But Feist fully exploits the Fort’s chambered interior, two decades before a helicopter landed in the narrow courtyard for John Boorman’s Point Blank.

Feist is a lot more than a traffic cop in The Man Who Cheated Himself. He stages strong sequences near Coit Tower, at Fisherman’s Wharf and on the Golden Gate Bridge itself. A visual gag with a handkerchief makes for a marvelously cinematic suspense climax.

The cast is a little off-kilter in ways best discussed in the disc’s fascinating making-of featurette. Lee J. Cobb’s first (only?) leading-man starring role is a brave attempt to pass off the distinguished Broadway star as a romantic leading man. Is this the kind of part that Laird Cregar saw in his future when he half-dieted himself to death? I find Cobb entirely sympathetic especially when compared to other compromised noir protagonists who must watch as associates tighten the noose around their indiscretions — think Broderick Crawford in Scandal Sheet. Ed’s only real crime is loyalty to a lover. The way Cobb’s detective accepts his ‘loser noir’ fate at the finale puts him in his own class of hardboiled elegance. It’s a lot better than spilling acid on himself and executing a dance move to fall out a window, as Cobb must do at the finale of Party Girl. Sure, after seeing Jane Wyatt’s flighty, conniving Lois Frazer nobody would recommend she play any more insincere femmes fatales. Wyatt perhaps over-acts a tad in the effort to overcome her virtuous Irene Dunne-like screen image, the one that assured immortality for her no-nonsense TV housewife Margaret Anderson. Little-known is that Wyatt’s screen career was cut short by a blacklist/graylist problem. And even noir fans may not be aware of subtle, uncomfortably negative aspects in two of her previous noir appearances. Her wronged housewife in André De Toth’s Pitfall emerges in the final scene as a self-righteous spouse from Hell, who will forever use hubby Dick Powell’s transgressions as a wedge against him. Even more under the radar is Wyatt’s upscale wife in Elia Kazan’s Boomerang. When husband Dana Andrews considers taking a cut in job status to ‘do the right thing’ he asks Wyatt if she wouldn’t mind going back to a less affluent lifestyle. She says one thing but her whole spirit screams, ‘over my dead body.’ Her upstanding society missus has already admitted that she’s connived with a crooked developer to fleece the city — an important issue that’s just dropped. In The Man Who Cheated Himself Jane Wyatt’s Lois is not nearly as subtle. Her ability to slice fine degrees of culpability is not used — Lois is just a selfish nitwit, who has seduced Ed Cullen into disaster. As for John Dall, he seems to work best when given extreme characters, the obvious example being his likable Bart Tare in Joseph H. Lewis’s Gun Crazy. Elsewhere Dall contributes mostly broad, borderline dysfunctional performances. His histrionics in Alfred Hitchcock’s Rope are partly redeemed by a thick theatrical flavor but his evil schemer in George Pal’s Atlantis: The Lost Continent is just one unforgivably bad performances among others. Is John Dall ever subtle or restrained? Even his huge, charming smile seems too much at times. In Stanley Kubrick’s Spartacus, he and Laurence Olivier seem to be acting in different movies. He makes John Gavin seem polished. Next to the fine performance from Lee J. Cobb, the most natural presence in the film is that of Lisa Howard, shoehorned into a sidebar role as the supportive, wholesome young wife. Ms. Howard’s story outside the film is nothing less than astounding, the stuff of feminist intrigues, that’s become even harder to get a handle on. Howard later quit acting, got into television and after interviewing Nikita Khrushchev became a major network newswoman. Her connection to Fidel Castro reportedly compromised her journalistic integrity; possible disapproval of the C.I.A. didn’t help either. Ms. Howard would surely be a sensational subject for a bio but her bizarre story is too easy to take to exploitative conspiracy-theory extremes. We’re surprised that she didn’t wind up as another (distorted) character in Oliver Stone’s J.F.K..

The finely crafted, visually exciting The Man Who Cheated Himself will be a rewarding discovery for noir fans searching for unheralded gems. Had it not been lost for so long in the shuffle of orphaned titles it would likely be much better known now.

Flicker Alley’s Blu-ray + DVD of The Man Who Cheated Himself is a particularly happy discovery. Its film elements appear to have been preserved in excellent condition — the deftly directed thriller is back in terrific shape. Russell Harlan’s B&W images show no sign of compromise, and the location work is of a particularly high polish.

The disc contents are credited to The Film Noir Foundation, the UCLA Film & Television Archive and an entity called Roam. The menus, disc design and insert booklet are finely turned out, as are the two video featurettes. The Man Who Cheated Himself Revisited lets FNF’s Eddie Muller and Alan Rode sketch a critical profile for the picture aided by Julie Kirgo and the director’s son Raymond Feist, who likely helped confirm some of the more sensational revelations about the mysterious Lisa Howard. The discussion doesn’t run wild with the facts of her case, which is all too easy to do.

A location comparison has fun juxtaposing film scenes with the same locations today, going so far as to show that Hitchcock reproduced a couple of Feist’s camera angles in Vertigo. As Eddie Muller loves San Francisco-based noirs, I prefer to imagine that he knew all the locations at first glance … although the selection cheats one housefront filmed in Los Angeles, on Vermont Avenue!

The trailer begins with all three leading actors addressing the camera directly, telling us that we’re in for a bumpy crime thriller. The Man Who Cheated Himself does not disappoint.

Here’s a nice article on San Francisco locations from 2017, at Laura’s Miscellaneous Musings.