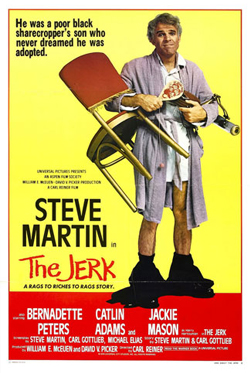 Steve Martin’s stand-up act combined equal measures of the stupid and the cerebral; he turned dropping your pants into a philosophical statement. By 1979, his remarkable on-stage success had gained him enough clout to write and star in his own film. Directed by his old friend Carl Reiner, The Jerk, is an often hilarious series of vignettes that expand on Martin’s post-modern stand-up routines while harking back to Paramount’s silly/surreal screwball comedies of the early 30’s. Produced for a lowly 4 million dollars, the film cleaned up at the box office earning over 73 million by year’s end.