Just what is the dreaded ‘Process 97’?  Henry Hathaway’s docu-drama combined newsreel ‘reality’ with a true espionage story from the files of the F.B.I., creating a thriller about spies and atom secrets that dazzled the film-going public. But how much of it was true, and how much invented? 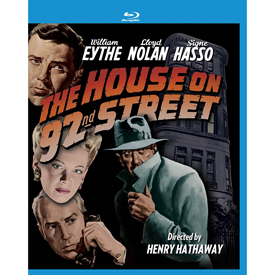 I can’t believe that I didn’t review the fascinating The House on 92nd Street back in 2005 when it came out in the Fox Film Noir DVD line, so I eagerly take that task on now. Although it shows up fairly frequently on cable TV, this 1945 release lacks big stars to grab viewer attention. It instead appeals as a noir hybrid that grabbed audience attention with a new kind of ‘reality.’ Inspired by documentaries and newsreels from the war front, Louis De Rochemont’s production attempts a ‘reality’ vibe. Plenty of movies claimed to be based on facts but The House on 92nd Street waves that flag in every scene: that what we are seeing is the way it happened is just as important as the characters. We even see reel newsreel footage related to the events we are being shown. The subject is wartime counter-espionage, a program in which the F.B.I. truly outdid itself. The bureau had kept tabs on the German Bunds and their plans to subvert the American war effort.

Most wartime thrillers about sabotage rings and spy networks were Hollywood fantasies. The war had been finished only a couple of months, when this show was presented as an authentic account of a Nazi spy plan to steal engineering secrets for the construction of the atom bomb. Movies didn’t come any more topical than that. But as Eddie Muller points out in his commentary, the story we are told isn’t entirely factual.

In 1939 college student Bill Dietrich, a German-American (William Eythe) is approached by a Bund to spy for the Reich. He goes straight to the F.B.I. and becomes an agent for Director Briggs (Lloyd Nolan). In ten days Dietrich goes to Hamburg and is put through spy training, and months later comes back to New York, to help a cell of Nazi agents to funnel military secrets to Germany. Briggs cleverly alters Dietrich’s paperwork so that the leader of the cell, Elsa Gebhardt (Signe Hasso) will allow him access to all of her agents. Working a radio station that secretly relays all the cell’s communication direct to F.B.I. headquarters, Dietrich discovers how the spies are obtaining information about a ‘process 97,’ which the experts reveal is related to atomic research. The Feds identify all the spies just as Dietrich’s charade is discovered and Gebhardt and her henchmen are preparing to kill him. But more surprises are revealed as the G-Men close in. 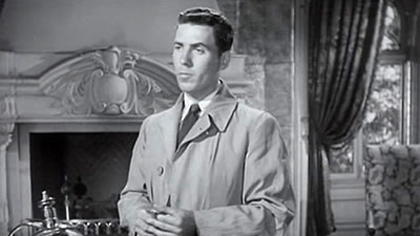 The House on 92nd Street has a ‘story’ and screenwriters like any other picture. Many of the facts are authentic, especially montages showing the workings of the F.B.I., filmed on bureau premises with real personnel. Much of the movie’s exterior scenes were also filmed in NYC on the actual locations where the spy activity took place. Famed as the first Hollywood feature in the ‘docu-drama’ style, the show states that it is entirely factual. It uses actual 16mm F.B.I. surveillance film to establish credibility. Director Henry Hathaway and his cameraman Norbert Brodine shoot most of the exteriors in a standoffish, neutral way that subtly suggests surveillance footage — filming from disguise in a van, for instance, letting the actors walk among ordinary citizens. Many of the interiors are also kept as plain-wrap as possible.

The style of the film is ‘post-Hollywood’ in that it is skips back and forth across several visual and narrative approaches. The overly official Reed Hadley narration comes straight from producer De Rochemont’s earlier March of Time newsreels, which to 1945 audiences conveyed a tone of Absolute Truth. William Eythe’s main character is a true-blue American yet not the focus of the film. Instead of seeing the action through his eyes, we get omniscient glimpses into the work of Agent Briggs back at headquarters, the Nazi spy school in Germany, and Elsa Gebhardt’s spy ring, which operates out of a fancy salon on the Upper East Side.

As Edgar J. Hoover is the unbilled ‘auteur’ of the F.B.I. sequences, they play out in stiff just-the-facts solemnity, sometimes with patriotic music on the soundtrack. The then-impressive content is the highly advanced technology and procedures used by the clean-cut G-Men. By contrast, Elsa’s nest of Nazi spies is a colorful gang that could have stepped out of Fritz Lang’s The Testament of Dr. Mabuse — dead-eyed little men and a hard-faced femme zealot (Lydia St. Clair, terrific). Elsa herself is a stern Teutonic taskmaster with a refined but intimidating manner. 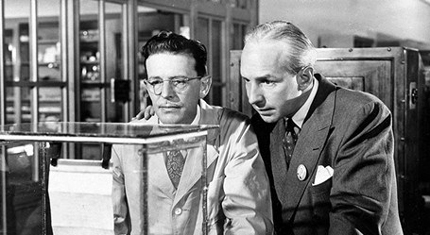 Audiences in 1945 bought the reality of everything they saw. The Bureau provided the show with plenty of interesting content that would become spy movie bedrock: one-way glass, the coding of messages, concealed cameras, special tools to detect secret invisible handwriting. The technical stuff is top flight, as when a Nazi radio technician examines Dietrich’s secret radio set-up in person and realizes immediately that its transmitter can only broadcast for a short distance.

The film’s best performers play the leading female villains. Swedish Signe Hasso combines uptown hauteur with a businesslike ruthlessness, and comes across as a realistic menace carrying out a daring mission. Virtual unknown quantity Lydia St. Clair is superb as a streetwise functionary, very dangerous and completely credible. When these women lose their tempers, Bill Dietrich has a lot to worry about. The smart casting extends to the other strongly sketched characterizations, one-scene bits with known personalities like Leo G. Carroll and Gene Lockhart, but also many one-movie actors and just-plain non-actors. The house manager at the notorious spy headquarters is none other than Elisabeth Neumann, who later married playwright Berthold Viertel, husband of famed Santa Monica Salon doyen Salka Viertel. Having relocated in Los Angeles in the late 1920s, the Viertels were the social welcome mat and helpers for mostly Jewish artists fleeing Nazi Germany. 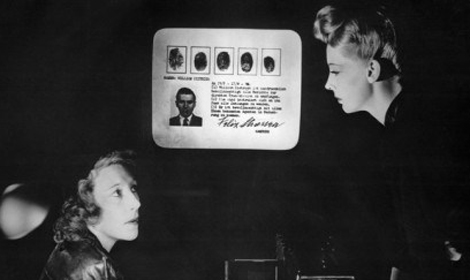 The House on 92nd Street has always been a special picture in that it bridges the gap between noir and the authoritarian wartime propaganda filmmaking that imposes an point of view — “Your government needs you to…” Some post-war crime and noir pictures took on this docu-drama style, affecting the same ‘shot on location’ realism and using stern narration to sell its messages as hard fact. An example that overly exaggerates the style is Jack Webb’s Dragnet TV show.

For its finish the film ditches the distancing narration and newsreel look and turns on the full nighttime noir ambience. We find out who the mysterious German Mr. Big is, in a plot reveal as melodramatic as any noir potboiler. The main baddie bites the dust, the others are rounded up and given staggering prison sentences, and even an attractive, menial functionary for the German spies get the book thrown at her. J. Edgar gets to show off the prodigious reach of his hi-tech Bureau and Darryl Zanuck’s 20th-Fox breaks new ground for exciting entertainment — it’s not a fantasy, it’s real. But the accompanying disc commentary begs to differ with that conclusion…

The KL Studio Classics Blu-ray of The House on 92nd Street is an immaculate scan and encoding of this fascinating picture. We closely studied it in a class at UCLA. One minute it’s almost a dry educational film, and the next a stylized drama with expressionist lighting. The images look nearly perfect. I tend to miss flaws when the movies are this good, and the only thing that caught my eye was a tiny bit of unsteadiness in one scene. The audio is just as strong. 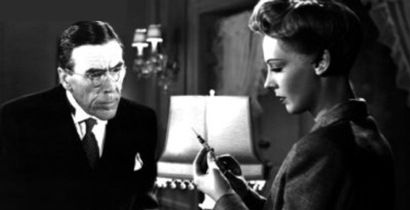 One of the best things about the old Fox Film Noir series were its commentaries, that often revealed the distortions of truth in Fox’s ‘docu-noir’ pictures. Alain Silver and James Ursini’s commentary on the James Stewart thriller Call Northside 777 is a must-listen for its uncovering of the whitewash of the Chicago police in its supposed true-life story. Eddie Muller’s feature commentary for The House on 92nd Street is just as eye opening. Many of the claims made by the film are specious and misleading. The ‘Christopher’ case shown in the movie is a composite of two real cases — which is why they can show the real arrested spies at the finish — but neither had anything to do with atom secrets. The Bill Dietrich character was actually a German national, not an American college student. *   Muller demonstrates that the show’s intent is not to deceive but to inform. All the technical details — relay radio stations, etc — are accurate.

Muller wisely does not take the info from Fox’s publicity files at face value — studio publicity material back then was prone to creating bogus human interest stories out of thin air. The only technical slip-up in Muller’s commentary is when he says that Fox had to invent compact sound equipment for use in the field. I’m sure they did exactly that, but I don’t think it would be needed on The House on 92nd Street anyway, as all the exterior scenes I see either don’t have dialogue, or it’s the kind that can be looped back in the studio.

Another bit of info from Eddie Muller shows us that even in this patriotic film, it’s dangerous to play around with facts. Is it harmless to present made-up events as if they were a true part of the public record? Fox had to assure viewers that the real-life bookstores seen in the film, where actual transfers of spy communication took place, were innocent of any wrongdoing. To me that means they were concerned that some stupid moviegoer might firebomb a bookstore under the bonehead notion that a nest of Nazis was still encamped therein. This seems relevant in terms of the disturbing news item this week, where a diner was targeted for vigilante violence because of ‘fake news.’ It’s a frightening time we live in — fighting Nazis seems much less of a problem than dealing with a culture of lies.

* Had it been made a couple of years later, with the Cold War announced and American policy transferring villain status from Germany to the Soviet Union, The House on 92nd Street might have preferred to let the hero’s nationality remain German. More than a few movie stories reinforcing the grudge against Germany, were altered to downplay Nazi perfidy, and rehabilitate the reputation of our suddenly vital new ally against Communism.