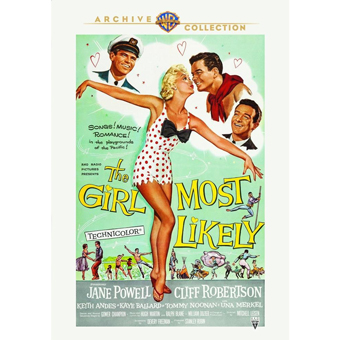 From roughly 1925 to 1957, the powerful men in charge of the big studios controlled most aspects of production. That all changed when studios had to make deals with independent production companies, floating scores of projects and hoping a few would see the light of day. Production heads changed frequently, and when one was shown the door, his successor often wiped out his slate of projects. When a major studio regime change occurs, important productions can become casualties, like Fred Zinnemann’s famous Man’s Fate, which was stopped at MGM after millions were spent in preproduction.

RKO was in trouble almost as soon as Howard Hughes took over in the late 1940s. He didn’t allow the production he hired to proceed with agreed-on projects. He fired much of the studio’s staff with little warning. He delayed the releases of good movies and played with pet projects for years. Hughes so thoroughly ran RKO into the ground that one might think it was a calculated plan — he still made a big profit when he sold it. By 1956 the once busy studio’s two lots were all but derelict. I saw what that was like, at MGM in the early ’70s. Some of the departments were still there, each manned by a skeleton staff. The famous commissary where stars gathered, and the little barbershop kiosks just outside only got the business of the few films shooting on the lot. Later, for 1941, we were practically the only show shooting. Looking across Overland Avenue, we could see the vast Back Lot, already partly demolished. It was to be sold as real estate. 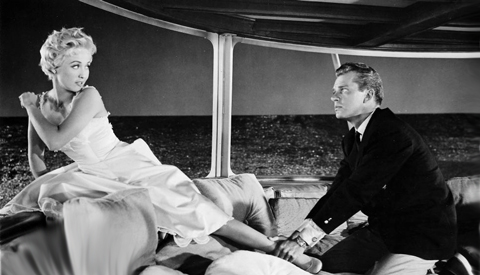 The 1958 release The Girl Most Likely was filmed two years earlier, and was the last show to be shot at RKO. With RKO’s distribution offices shut down, it ended up being distributed by another studio, Universal. Other RKO properties from 1957 were cast out as well: Run of the Arrow also to Universal, but Verboten to Columbia and the Japanese acquisition The Mysterians to MGM.

Printed in Technicolor, the bright and cheery The Girl Most Likely betrays no sign of RKO’s fiscal desperation. It is a musicalized remake of the cute 1941 Ginger Rogers comedy Tom Dick and Harry, directed by Garson Kanin and written by Paul Jarrico. The story of the attractive bank employee Dodie (Jane Powell) is much the same as in the B&W original, with the locale has shifted from small town America to Newport Beach in California, a pleasant seaside town not yet too expensive for ‘ordinary people’. Dodie is engaged to the square but steady real estate salesman Buzz (Tommy Noonan of A Star is Born). Buzz promises a prosperous future of social climbing. But Dodie is looking for romance. She lives at home with her parents (Una Merkel & Frank Cady) and her cute younger sister Pauline (Judy Nugent), who serves as sort of a cheerleader for finding the right mate. While on the ferry to Balboa Island with her workmate Marge (Kaye Ballard, in her first movie), Dodie spots a launch from the yacht of millionaire Neil Patterson, Jr. (Keith Andes of The Caine Mutiny) and falls overboard to affect a ‘meet cute’ with him. After a sweet date at the fun fair, and a kiss that ‘sends her,’ Dodie becomes engaged to her new beau as well, only to find out that he’s not the rich yacht owner but only Pete (Cliff Robertson), a local boat mechanic. While Buzz and Pete are pulling tricks to monopolize Dodie, she meets a drunken Neil Patterson Jr. on the beach. He falls in love with her too. After a whirlwind yacht trip to Mexico, they become engaged as well. When they return, Dodie must make a choice once and for all. 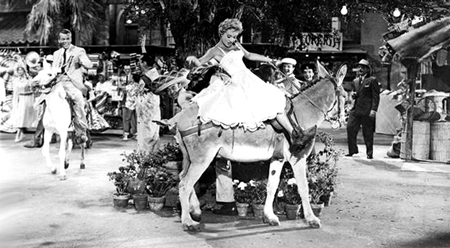 Talk about an unlucky film… Jane Powell was one of MGM’s bigger musical stars. She all but said goodbye to the big screen with this show, even though she’s quite good in it. It’s exceedingly well produced by Stanley Rubin, a writer who just six years before became a producer at RKO with the excellent The Narrow Margin. After Most Likely, Rubin turned to TV as well and ended up pioneering the TV movie. The same thing happened with the excellent director Mitchell Leisen, a veteran of glamorous Hollywood pictures who nevertheless gives this comedy a modern look.

The Girl Most Likely is old-fashioned and progressive at the same time. Partly due to the restrictive Production Code written twenty years before, by 1956 Hollywood was way behind the times. The culture had moved on to Rock ‘n’ Roll and more daring content — who needs Debbie Reynolds’ Dazzledent smile, when Brigitte Bardot’s naked derriere is on view in …and God created Woman? ( — or almost naked — I think that might have been censored from American screens. ) The kids wanted to see Elvis in Jailhouse Rock, not something their parents might enjoy.

The Girl Most Likely breaks format several times for fantasy musical numbers playing against stylized color backgrounds. In “We Gotta Keep Up with the Joneses” Dodie’s future with Buzz is envisioned as a rat race. They climb ladders with other couples obsessed with money and status. When Dodie discovers that the sexually attractive Pete isn’t a millionaire, she imagines herself as his squaw, raising a pack of ‘Injun’ kids on the warpath, in “Crazy Horse.” It isn’t as offensive as it sounds… or maybe it is. These fantasy numbers have the cartoonish look of a Frank Tashlin comedy, but not the wit.

Several fairly normal Powell solo numbers are present, beginning with the self-explanatory “I Don’t Know what I Want.”  Big dance numbers are staged on sets representing a Balboa marina and a Mexican marketplace. Choreographer Gower Champion puts a lot of effort into these group dance pieces, which are as good as any in MGM musicals of a few years before. Yet The Girl Most Likely is still a tame revisit of an older kind of movie. 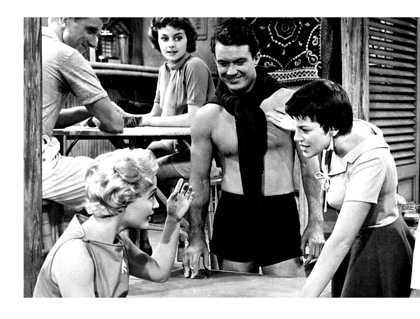 On the other hand, RKO’s show looks forward to trends not yet arrived. The germ of a Beach Party movie is in there, even if the dancers are young adults, not teenagers. But what seems obvious now is that Jane Powell is a proto- Doris Day. Just the next year Ross Hunter would perfect the chaste sex comedy with Pillow Talk, which was a smash success for Day and Rock Hudson. It has almost the same ingredients — a young woman’s efforts to find the right mate, romantic misunderstandings, plenty of ‘cute’ situations. The Kaye Ballard sidekick character is a fixture in most of the Doris Day movies. Powell’s Dodie is goes to an extreme when she throws herself into Balboa Harbor to snare a rich man. But two ingredients are missing. The obvious one is the sex angle — Doris Day was pure as snow, yet always flirting with the possibility of premarital sex. Secondly, the Doris Day movies always had a hint of social satire, making safe but clear jokes about advertising, the double standard, etc.. Day’s comedy vehicles may not be brilliant, but they acknowledge that change is on the way… Day’s characters are not satisfied with the status quo. Jane Powell’s screenplay, like most of square 1950s romantic entertainments, is rooted in 1940s complacency. Things are the way they are and will stay that way.

With its colorful, sunny exteriors and “G” rated romance, The Girl Most Likely most resembles Day’s It Happened to Jane. One might expect an old studio-bred director like Mitchell Leisen to deliver a stiff show, but Likely has a breezy outdoors feel, and the attractive interior-exterior sets are in no way fussy or forced, a charge sometimes applied to the former art director. His staging and work with the actors — like the rather lifeless Keith Andes — is fine. Cliff Robertson comes off as charming. Instead of providing unwelcome comedy relief, Tommy Noonan’s business go-getter is sympathetic.

In the end, the fantasy angle does get a bit thick. Like the standard high-instinct low-intellect heroines of older romantic comedies, Dodie can’t think her way to a decision, and instead ‘senses’ which beau sends her by the effect of a kiss — when she locks lips with Mr. Right, the entire screen is enveloped in a pink cloud. It’s a good workout for Technicolor, that’s for sure. The Girl Most Likely is a cheerfully frivolous romantic comedy in a format that, minus the music, would become the standard for the 1960s.

Fans of musicals will spot some talented ‘youngsters’ among Gower Champion’s dancers, from movies like Li’l Abner and West Side Story: Robert Banas, Harvey Evans, Goria DeWerd, Buddy Bryant, Lesley-Marie Colburn. Readers hip to the vagaries of the blacklist will note that original story writer Paul Jarrico’s credit is not present. Jarrico’s name is on a number of RKO pictures, right up through 1950’s The White Tower. As part of his anti-Communist policy, Howard Hughes pulled Jarrico’s credit from The Las Vegas Story, and won a lawsuit when the Writer’s Guild protested. He even threatened to re-shoot the credits of all previous RKO pictures to remove the names of political undesirables like Jarrico. The writer continued to work under aliases in Europe, but his Hollywood career was wiped out. 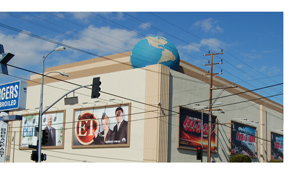 As a trailer editor, I saw Orion Pictures fold up in 1990-1991… we were to do trailers for the very promising The Addams Family, but Orion had to sell it to Paramount. It must have seemed rather macabre on the RKO lot, as departments closed up one after another, as their services to The Girl Most Likely were completed. Not much later Lucille Ball and Desi Arnaz would take over the Hollywood lot of RKO, just three blocks North of Savant Headquarters. It’s been part of Paramount for decades now. Just recently we’ve heard rumblings that Paramount is going to demolish the stage building on the corner of Melrose and Gower, the one where the giant RKO Globe, minus the radio tower, still stands. I hope they don’t obliterate it – we’d rather they reconstruct the tower, just for nostalgia’s sake.

The Warner Archive Collection DVD-R of The Girl Most Likely is a very nice transfer of a film originally released in Technicolor. The colors from the Eastman negative are bright and cheerful, coming off as extreme only in optical sections like the main titles, where Jane Powell’s red lipstick looks like a gash across her face. The bright primary hues in several of the musical fantasies are quite cheerful. The audio is also robust.

The show comes with an original trailer. We’re assuming that the movie was totally completed by RKO and maybe even given a few trial dates before being handed over to Universal for distribution. Most of the advertising materials still say RKO, and the film itself has not been rebranded as a Universal acquisition. As with Run of the Arrow, RKO apparently kept ownership, which is why it’s still in the library now controlled by Warners.