Sam Fuller’s superior western classic stars Rod Steiger, Brian Keith, Charles Bronson and Sarita Montiel, and takes on a tall stack of potent issues. A Reb sharpshooter denies the South’s defeat, and goes west to join the Sioux nation where he can continue his war against the Yankees. This spin on ‘The Man Without a Country’ is one of Fuller’s best thanks to a generous budget, unflinching action violence and committed performances. 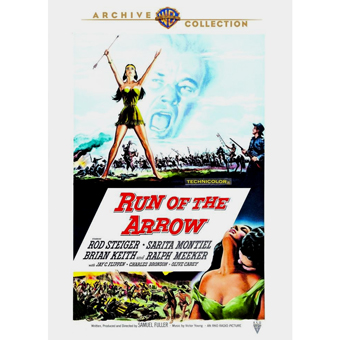 Sam Fuller’s best studio deal came to an end when Darryl Zanuck decamped from Fox. An aborted Fox project to be filmed in Brazil left Fuller high and dry, and he formed the company Globe Enterprises to keep moving forward. A distribution deal with RKO still left the filmmaker on shaky ground, as that studio’s operations were beginning to grind to a halt as early as 1955.

Fuller’s first Globe Enterprises feature is one of his best, a genre piece with an unbreakable premise, one that’s actually politically relevant in a decade when most westerns told the same old stories. The movie is so good, it was seriously ripped off by later films, one of which won an Oscar for Best Picture, and another that transposed the basic story to outer space. 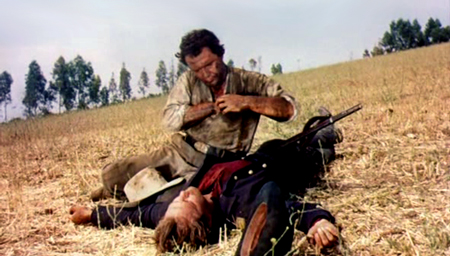 Run of the Arrow is the story of O’Meara (Rod Steiger), a Confederate soldier who fires the last bullet of the war. At the surrender he must be dissuaded from taking a shot at General Grant. Refusing to admit defeat, he denies his identity as a U.S. citizen and goes west. Through a brutal initiation ceremony he’s accepted by the Sioux as one of their own, and takes a wife, Yellow Moccasin (Sarita Montiel). O’Meara gives his word to fight the whites should they make war on the plains. But the Sioux instead ask him to help broker a peace agreement with the U.S. Cavalry. O’Meara gets along well enough with Capt. Clark (Brian Keith), but Clark’s subordinate Lt. Driscoll (Ralph Meeker) is a Custer-like troublemaker determined to make a career for himself by killing Indians. Even worse, Lt. Driscoll is the very same Yankee that O’Meara shot, back on the last battlefield of the Civil War.

Sam Fuller didn’t mince words or beat around the bush in his screenplays, and in Run of the Arrow he contrives a story that places a number of issues in high relief: national identity, rebellion, the meaning of an oath. His interesting cast is given wholly atypical parts to play. The story has plenty of very serious, often savage action violence. It’s one of the best westerns of the ’50s.

Rod Steiger’s Irish-Southern accent is variable, but his performance is free of most method tics, and very affecting. O’Meara is a near-suicidal renegade. He’s interesting because he’s a fearless proactive hero who rejects things as they are. But he’s also a misguided malcontent, a misanthrope dedicated to a losing cause that’s also dead wrong. Smack in the middle of the first Civil Rights conflicts of the ’50s, O’Meara states the Southern position to a T: he wants his country free, white and Christian. Rather than accept the Union, he’ll go live with the savages. 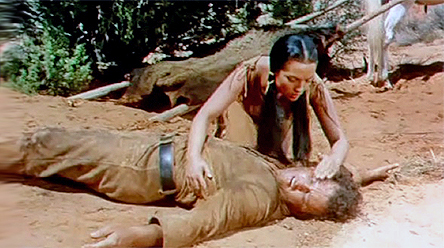 O’Meara thinks that life can be as simple as giving an oath, and for a time he finds a home with the Indians. The run of the arrow ritual is a death sentence for O’Meara and Walking Coyote (Jay C. Flippen), a discredited Sioux. But when O’Meara survives, the Sioux chief Blue Buffalo (Charles Bronson) accepts him as a sincere new tribe member. In no time at all O’Meara has found a wife and adopted a child of sorts, the mute boy Silent Tongue (Billy Miller).

Anglos play the Indian roles, which was the way things were in movies of 1956. But for once they’re given decent characterizations, from Flippen’s eccentric loner to H.M. Wynant’s Crazy Wolf, a brave who remains O’Meara’s enemy. Spanish star Sarita Montiel made sexy musical comedies in her home country, and is trying to break into Hollywood for the second time. True, Yellow Moccasin is a stock Injun princess who looks as if she bathes in perfume, not buffalo grease. And her speaking voice is a soft purr provided by actress Angie Dickinson.

Future superstar Charles Bronson was still paying dues, and would remain in the supporting actor trenches for at least ten more years. He seems to have taken yet another Indian part just to show off his sculpted body — every school kid wanted to have Bronson’s look. For that matter most superheroes would be envious. Brian Keith is the voice of reason, quoting Edward Everett Hale’s story of Philip Nolan and urging O’Meara to come back to his own people, for his own sake. Their four-minute unbroken dialogue scene is a model of good writing. The talk drifts eventually to divisive politics, and they remain on good terms without any lame “agree to disagree” baloney. Ralph Meeker is perfectly cast as the kind of careerist SOB that joins the military looking for action. And the Army seems perfectly aware that he’ll disobey orders at the first opportunity, wrecking the tenuous peace deal. The outbreak of hostilities will be blamed on the Red Man.

Sam Fuller would later try to tackle big issues on a dime store budget — his third and last RKO film Verboten! suffers from this. Run of the Arrow has everything a big western needs: impressive cavalry troops, an Indian army, and a big battle scene for the finale. He doesn’t have to cut any corners. Fuller’s blunt ‘cinema fist’ effects come across better in this rich context. The Death Run of the Arrow is nicely staged, with angles chosen to allow a ‘stunt runner’ to be substituted for the star Steiger. Ever run barefoot through the desert? I’d decline the invitation too. Fuller’s most original idea is the best of several moments that undercut assumptions about race hatred. Silent Tongue is sinking in quicksand, and can only call for help by tooting on the harmonica he’s been given. A Union trooper (Chuck Roberson, a stuntman often given bit parts) risks his life to rescue him. The way it works out, Silent Tongue can’t tell anybody what happened to the unlucky trooper. 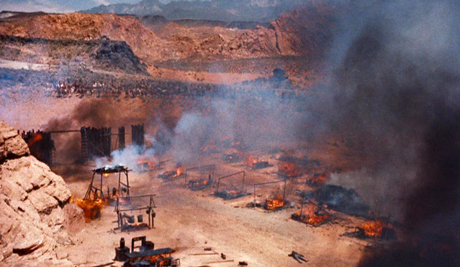 I’m betting that the Production Code Administration had a say in one scene. O’Meara is allowed to foreswear the United States and pledge allegiance to the Sioux, but he insists on remaining a Christian. Most ’50s studio movies take pains to assert that Judeo-Christian values are everywhere, even on other planets. For Fuller, O’Meara’s demand that the South be free, white and Christian is not a badge of honor. Unlike so many other western filmmakers, the New York bred street scrapper Fuller does not get all misty-eyed with sentiment for the South. He instead makes a study of unregenerate rebellion, as if it were a psycho-social problem.

Neither does Fuller flinch from the consequences of his violent story. The Indians and the Cavalry commit murders based on notions of tribal honor that are really little more than brute aggression. When a main Anglo villain is captured, he’s killed slowly, and Fuller lets his screams go on for quite a while. Nothing’s changed, nobody learns anything. ‘Honor’ is the enemy of simple human dignity.

Unfortunately, being with RKO put a snag in Fuller’s workflow. Run of the Arrow sat almost a year before being released, and was actually distributed by Universal-International, along with other RKO shows like Jet Pilot and Escapade in Japan. Fuller’s Globe Enterprises bounced between Fox (Forty Guns, China Gate), RKO and Columbia (The Crimson Kimono, Underworld U.S.A.), yet the writer-director maintained his independence. Run of the Arrow disappeared for a while but has always been appreciated for what one critic called its ‘unbridled audacity.’ English critics flipped over Fuller’s games with narrative conventions. The movie begins and ends with O’Meara firing the same bullet into the same man, which in context seems perfectly rational. And when asked why he ran away from the Sioux tribe, Walking Coyote echoes O’Meara’s own anti-social argument: “Aw, I got no stomach for politics.” 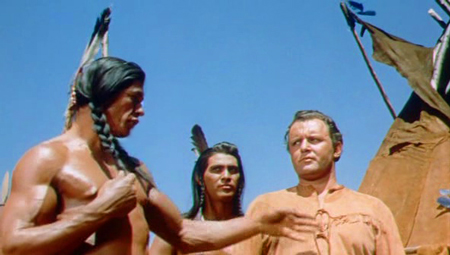 The Warner Archive Collection DVD-R of Run of the Arrow is a very good encoding of this distinctive western attraction. Joseph Biroc’s bright camerawork makes the most of a film shot almost entirely outdoors. Colors are good and the image looks fine at all times.

Many shots do have increased grain thanks to a directing/editing policy that consistently mars Sam Fuller’s work. He shoots in uncut master shots, but then later inserts close-ups into these shots, coverage angles that he never filmed. The closer angles emphasize certain lines but are most likely there to allow the editor to skip dialogue and tighten the pace. To have something to cut to, Fuller just blows up the shot with an optical enlargement. No matter the scene, the result is an ugly punch-in to a slightly degraded image. Fuller either didn’t want to spend time or money for coverage he didn’t expect to use, or he didn’t care about the loss of quality (and directorial finesse). The release printing for Run of the Arrow was done by Technicolor, a printing process that would minimize the increased granularity. When the transfer is really good some of these optical cut-ins are okay, but they really stand out in a show like China Gate.

The WAC’s transfer of Run of the Arrow is at 1:78, which looks just fine to me. Although many sources say it was a Superscope film, with a 2.00:1 or 2.35:1 slice pulled from standard flat cinematography, I don’t think that can be true. Compositions are so tight that heads would be lost in almost every shot. Fuller and Biroc leave no dead space at the top or bottom of the frame, and the titles do not look formatted for anything wider than 1:85. I also saw no Superscope logos in the credits or on any of the posters, at least the ones online. So I think this enhanced widescreen ratio was the right way to go.

Run of the Arrow is such an obvious choice for DVD that I have to believe that restoration issues held up its release. The Warner Archive Collection isn’t skipping over the tough video mastering challenges in its library. I hope they figure out how to best release missing favorites like The Big Sky and Rachel and the Stranger, two RKO titles for which optimal quality full-length original versions don’t exist.