Now for something truly remarkable from the neglected Spanish cinema. Luis García Berlanga’s wicked satire is a humanistic black comedy, free of cynicism. The borderline Kafkaesque situation of an everyman forced into a profession that horrifies him is funny and warm hearted – but with a ruthless logic that points to universal issues beyond Franco Fascism. 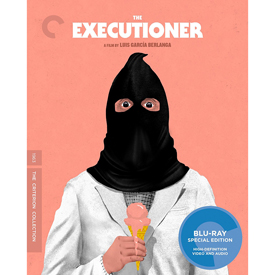 Criterion brings us 1963’s The Executioner (El Verdugo), a major discovery for film fans that thought Spanish cinema began and ended with Luis Buñuel. I’ve seen politically-charged Spanish films from Carlos Saura and Juan Antonio Bardem; those of the surrealist Fernando Arrabal are harsh and ugly, not as clever as Luis Buñuel and devoid of a sense of humor. Luis García Berlanga would seem the perfect compromise for viewers that find Buñuel too cold and cynical; in fact, Berlanga’s approach has been compared with Ernst Lubitsch. Also known as Not on Your Life, The Executioner is that rare animal, a perfect black comedy that has no need of gross absurdities or exaggerations. Everything that happens in it makes logical sense, and the people we meet are likeable, even charming. Yet Berlanga subverts conventional views of society, and demonstrates how none of us can claim a moral foundation, that we are all complicit in society’s greater crimes.

What’s more, it’s a wicked attack on what Spaniards call Francoism — the mundane but murderous Fascist rule of Generalissimo Franco. Invited home to once again make a movie on Spanish soil, Luis Buñuel earned himself a continued exile by handing Franco the political hand grenade of Viridiana. Although he suffered censor cuts from time to time, Berlanga’s work was sufficiently non-confrontational to save him from extreme censure. Yet everything about The Executioner is political. The film was partly produced by Italians, and its star Nino Manfredi is Italian. As pointed out in Criterion’s extras, the Italian title is La ballata del boia. ‘Boia’ is Italian for executioner, which was a name given to Franco by critical Italians. It’s partly an accident of history, but Berlanga’s movie will forever be linked to Franco’s execution of his political foe Julián Grimau, whose death became big news just a few weeks before the premiere.

At least two critics in Criterion’s extras refer to The Executioner as the greatest Spanish movie ever made. 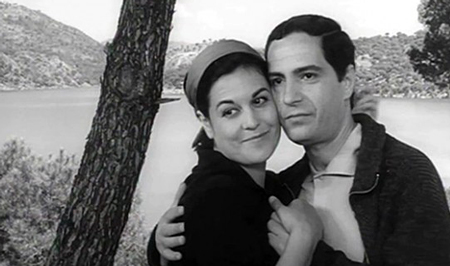 The Executioner has no execution scenes, no on-screen cruelty and no horrible villains. A reasonably ordinary guy seeks only a better job, but events force him into taking a horrible job. Funeral home employee José Luis Rodriguez (Nino Manfredi) meets an aging official executioner Amadeo (José Isbert). According to Spanish law in the 1960s, Amadeo kills by strangulation. Because of their professions, both men are social untouchables, and José finds himself attracted to Amadeo’s daughter Carmen (Emma Penella) partly because it is so difficult for them to attract possible mates. José likes things as they are, but when Carmen becomes pregnant, he finds that he must join the consumer mainstream. They need an apartment suitable to raise a child in, and as Amadeo is retiring, José must have a better job. Because of the stifling civil bureaucracy in which connections are everything, the only well-paying job José can hope for is to succeed Amadeo as a certified executioner. Even the civil servants that advance José through the red tape want nothing to do with him. Amadeo introduces José to an author (Valentín Tornos) who tells him that his profession is traditional and necessary. José is at first happy when no assignment is forthcoming; people are pardoned or die before the sentence can be carried out. Then he’s summoned to Majorca to perform his official function. When the execution is delayed, Carmen, the new baby and Amadeo are delighted to have a paid vacation in a tourist heaven. But then the guardia civil come for José, and there’s no backing out… totally unprepared, not wishing to hurt a fly, he has no choice but to follow through.

Believe it or not, The Executioner is a cheerful light comedy. José is a sweet guy who just wants to work and raise a family, but social pressures to conform — to afford that nice apartment — force him into doing something that revolts him and goes against all of his personal principles. The comedy is all character oriented and non-cynical. Unlike the sledgehammer anti- capital punishment harangue of the Japanese Death by Hanging, the ‘message’ in this movie is never made obvious. Yet by the end we understand completely, and can ‘read between the lines’ of Berlanga’s precisely-plotted events. 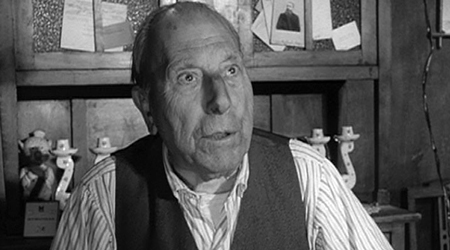 Much of the disarmingly amusing satire is from co-writer Rafael Azcona, with certain ideas contributed by the great Italian screenwriter Ennio Flaiano. Nino Manfredi is a winning, inoffensive hero and Emma Penella is his sweetheart and practical wife. [ Perhaps her voice is so charming because it resembles that of beloved voice artist June Foray? ] José Isbert, a tiny, hunched old man, is the film’s heart and soul. His old executioner strangles people for a living, apparently with a garrote, yet he sees himself as just another worker and is forever defending the dignity of his profession. There are constant reminders of the social cost of such work. Few people want to so much as have a conversation with an executioner, not even the jailers. Carmen and José’s wedding is a travesty. The church shoehorns them in for a rushed ceremony as the decorations for a previous wedding are being taken down — the candles are extinguished as they take their vows, presumably to preserve them for paying customers. José’s own guests and witnesses don’t want to put their names on the marriage license, for fear of future social repercussions to their children. In Franco Spain, even a casual negative association could make the difference between political acceptability or banishment.

On the other hand, there are constant cute moments, such as when Amadeo proves that his experience as an estranguladora give him the ability to judge a man’s shirt size with just a glance at his neck. The way that Fascism turns people against one another is demonstrated in subtle ways. On a picnic, a man and woman with a portable radio are resentful that José and Carmen are dancing to ‘their’ music. Freeloaders! 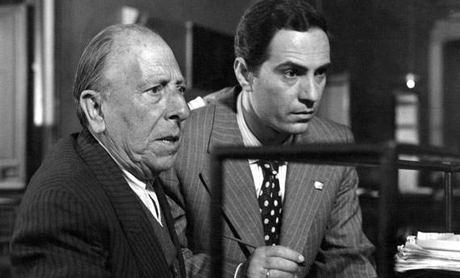 What eventually sinks in is the realization that most of us are forced to work at jobs doing things we don’t want to do, just to make a living. People soon ‘stratify’ by job description and profession. Because materialism is the common rule of the land, people casually commit minor offenses to make a better living, and ignore the consequences to others – cheating on taxes, for example. The horror is that the pressure to provide for his family blots out moral considerations. José’s anxiety over his job puts him in serious denial, believing that he can take the money yet avoid performing his part of the bargain. Amadeo and Carmen humor him and ignore his whining, just waiting for him to ‘get over it’ so their life in the new apartment will be secure. ‘Relax and have an ice cream, they say.’ But for José, getting over it means surrendering part of his humanity.

The much discussed final scenes of The Executioner are too good to go into too much detail. Thinking he’s off the hook, that a pardon will come through, José is in Majorca watching a musical show in an underground grotto-theater where the musicians arrive in boats. Behind them comes a police rowboat, and a man with a megaphone calls for José. It’s as if he were being summoned to cross the River Styx. Everything leads to a showdown impasse that José simply can’t handle. The end of the scene is deadly serious, yet plays like comic slapstick. It’s unnerving. 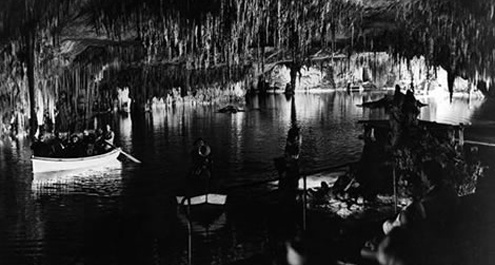 There are no villains, just a judicial necessity that forces one unwilling man to kill another unwilling man. It’s one of the best scenes ever about capital punishment, with no waffling about guilt or innocence, just the social pressure to get with the program of organized murder. The Executioner is about the pressure to compromise one’s morals and share complicity in ‘quiet crimes.’ Its relevance goes beyond the specifics of Fascist Spain. Every government does things that sometimes seem like crimes, but as individuals we dissociate ourselves from direct responsibility. What’s the difference between José, and a man who joins the military reserves in peaceful times, gambling that he’ll never be called up to fight?

The miracle of Luis García Berlanga’s film is that it says all this yet remains funny and warmly human. We can only hope that the grim title and Criterion’s dark cover illustration don’t scare people off: this show makes one smile, not cringe. I previously knew the Spanish director only from reports of his movie called Calabuch, a philosophical reverie about an atom scientist who journeys to a Spanish town. Now that I’ve seen the quality of Berlanga’s filmmaking, I’ll be watching and waiting for more. 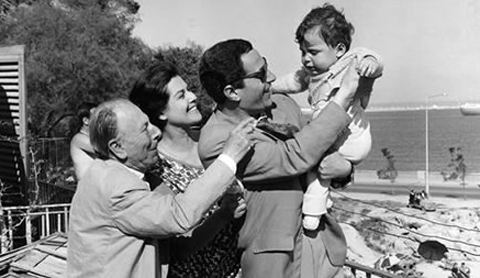 The Criterion Collection’s Blu-ray of The Executioner is a new, restored 4K digital transfer of this marvelous surprise, in B&W widescreen. Directed in unobtrusive long takes with complex camera moves, Berlanga’s film is as sophisticated as anybody’s cinema anywhere. The cameraman is Italian Tonino Della Colli, an artist soon to become associated with the films of Sergio Leone.

Disc producer Kate Elmore assembles an illuminating array of extras. Considering how little attention Spanish cinema and its experts are given compared to France and Italy, the interviews here are especially welcome. Pedro Almodóvar provides an introductory pep talk assuring us that a Spanish director we’ve never heard of is as revered as native son Luis Buñuel. An hour-long docu gathers fascinating film clips, factual revelations and learned opinions. The score of Spanish film experts make a compelling case for Luis García Berlanga’s humanist brand of genius, while sketching the fascinating background of Franco Spain in the early ’60s.

An elaborate Spanish TV show explores the world of Berlanga, and contains interviews with the man himself — he lived until 2010, the last 35 years of which were spent in a democratic post-Franco Spain. The original trailer included places The Executioner as a mass-appeal comedy.

David Cairns’ consise and expressive insert foldout essay marvels at the film’s effortless ability to be simultaneously a light comedy and a profound statement of the human condition.