You want radical? Look no further. Nagisa Oshima’s near-legendary issue drama makes a wickedly frightening protest against the death penalty, but then proceeds into formal abstraction and the endorsement of a violent radical position. You can’t find a political ‘gauntlet picture’ as jarring or as potent as this one. 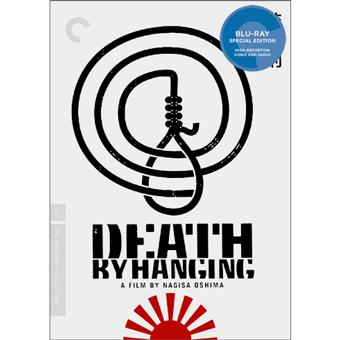 Believe me, you ain’t seen nothing yet. Nagisa Oshima is a radical’s radical, a cinema stylist committed to his politics — which are actually more humanist than radical. Just the same, the director’s 1968 Death by Hanging (Kôshikei) is a gauntlet thrown down before the Japanese powers that be. Oshima has waged film battles against the conservative deniers of war crimes and especially the racists blind to the persecution of Japan’s Korean minority. His is no dilettantish outrage but the calculated actions of an artistic revolutionary. Death by Hanging is a film that no commercial studio would touch — and Japanese studios were in many ways much less restrictive than our own. For a show like this the filmmakers had to create their own distribution entity, called Art Theater Guild. 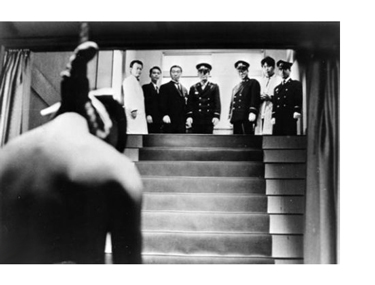 This picture was shown overseas in the same venues that would support anti-imperialist films from French artists like Jean-Luc Godard and Chris Marker. It certainly didn’t show where I could see it and for forty years has remained a nagging entry in visionary books like Amos Vogel’s Film as a Subversive Art.

Vogel called Death by Hanging ‘the most genuinely Japanese work to be seen in the West.’ Fellow MGM film employee Gregor Meyer saw it, and told me that no casual description could do it justice. Based on a real case, it starts like a documentary but quickly slips into absurdity, folding back to critique itself like a play by Bertolt Brecht. By the midpoint objectivity has been left far behind, and determining what literally is happening is no longer even relevant. I found the film exasperating; it was difficult to stay engaged. But it’s no fake: the political messages it delivers have real power.

A clinical opening asks what we think of the death penalty, and then explains exactly how it is carried out with the example of “R” (Do-yun Yu), a young Japanese of Korean origin condemned to hang for raping and murdering two young women. But R survives the hanging, which throws the assembled prison officials and guards into a frenzy of doubt. The guards want to hang him again, right away, but the Catholic priest claims that since the man’s soul has already been given the last rites, it is no longer in his body. 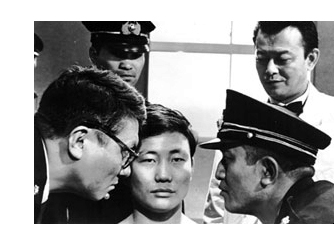 R acts as if stricken with amnesia, and somebody remembers that nobody can be hanged unless they’re conscious and lucid. Under the idea that R must be made to reaffirm his identity and his guilt, the warders reenact his crimes for him, playing roles in the claustrophobic execution chamber.

At a certain point the film abandons logical unities, and the execution party follows R out into the city, returning to the scenes of the crime. As they fantasize to get R back ‘into the mood,’ the warders’ words and actions reveal that they share with him the same brutal attitudes toward sex. Then the show parts with what remains of narrative logic. A character ‘materializes,’ that not everybody can see. What we do see might be theatrical manifestations of moral and political arguments. When R finally begins to talk, he becomes a representative for all men murdered by the Law.

Death by Hanging confronts us with two hours of experimental theater in a confined space. The officials and guards bicker and argue and eventually run amuck, revealing their true selves. At an impromptu saké party, one man entertains the others with ribald pantomimes that make him seem more sexually perverted than the convicted man. The priest breaks down and tries to kiss the other men around him. Two of the execution officials were involved with war crimes, and another expresses the opinion that all Koreans in Japan should be put to death. The ‘correctional education officer’ loses control during the (real? dreamed? theoretical?) reenactments of the murders, with devastating consequences. 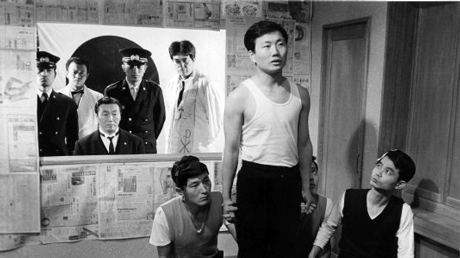 The character that Oshima ‘materializes’ in the execution chamber is a Korean ‘everywoman’ in a beautiful kimono. When she expresses camaraderie with her condemned brother Death by Hanging spins into political abstraction. The last minutes are pretty bizarre. The show is a tract against capital punishment but also an angry protest against Japanese discrimination against Koreans, a situation of serious cultural persecution in the 1960s.

I’ve never seen anything quite like Death by Hanging. Oshima’s direction is precise and his script (with Criterion’s unexpurgated subtitle translation) is pretty graphic. I have read that humor among drunken Japanese reaches unknown heights of vulgarity, and this show delivers a stiff dose. The acting is difficult to judge, as the characters become so agitated. It is a theatrically hyped satire, but with teeth. Amos Vogel is right in that non-Japanese audiences find it difficult to relate to.

Only a couple of actors are familiar. The warden Kei Sato is in many well-known pictures — Kobayashi’s Hara-kiri, Shindo’s Onibaba. The excitable ‘Education Officer’ is in Kobayashi’s Black River and the first Sword of Vengeance film. 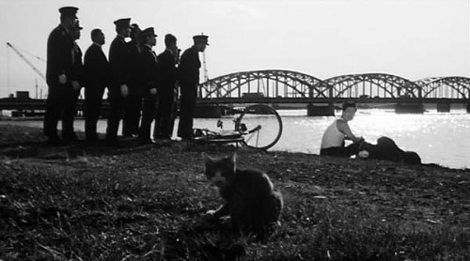 The Criterion Collection’s Blu-ray of Death by Hanging presents this once rare item in perfect condition. A production note states that the oft-quoted filming format of VistaVision is false, which makes sense for a low-budget art film not even associated with a major Japanese studio. I also guess that 1968 is about when Japanese movies stopped being either strictly 1:37 flat or anamorphic ‘scope, with nothing in between. The format here is 1:85 spherical widescreen. I’ll look forward to reading the notes of expert Stuart Galbraith, if he writes about this disc.

About 4/5ths of the movie takes place in an authentically reconstructed copy of a prison execution chamber, but for several scenes Death by Hanging breaks free to roam outside — through a school, on the bank of a river and on a rooftop, where a bizarre restaging of a murder takes place, or seems to take place. There are plenty of clues to tell us that ‘we’re not in Kansas anymore’ — “R” dashes from the execution compound directly onto an unrelated street of industrial junkyards, with the sounds of an Adolph Hitler rally blaring on the soundtrack. In terms of alienation effects, this would seem to be as Brechtian as they come. 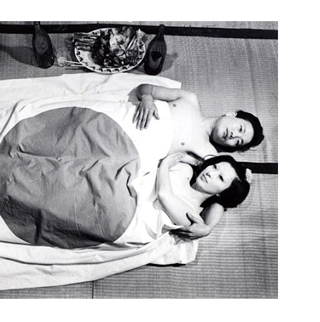 Criterion’s extras are lean but choice. Nagisa Oshima’s ‘straight’ docu Diary of Yunbogi counterpoints Oshima’s own stills of ragged Korean kids in hellish slums, with poetic words from the diary of an actual slum boy. The excellent interview extra is with critic Tony Rayns, who clears up some of our anxious questions about Death by Hanging, even if he admits that a final interpretation is up for grabs. Rayns’ personal take is that Oshima’s case to abolish capital punishment holds up, but his revolutionary statements justifying political murders do not. At the theoretical level, at least, the film claims a justification for the real-life sex killings that served as the basis for the film, a position that only a zealot would endorse. Rayns points out that R’s Christian identity is carried through the ending, when his body mysteriously disappears. Rarely have abstract stage devices worked this well on film.

Even more startling is the brilliant, crazy trailer for Death by Hanging. Oshima narrates it himself and repeats some of his political speaking points, even the radical ones about righteous political violence. At the end he introduces photos of his fellow writers and filmmakers on the show, referring to them all as ‘Guevaras.’ Compared to Oshima, even Jean-Luc Godard comes off as a poseur. This Japanese political artist doesn’t mince words.